I have a thing for ice cream.  Maybe because I was born in August, I think I've always wanted ice cream parties for my birthday as a kid.  This could be why I keep finding myself making ice cream cakes for my son for his birthday in June (I worked in an ice cream theme party favor for the little one's party this year too). 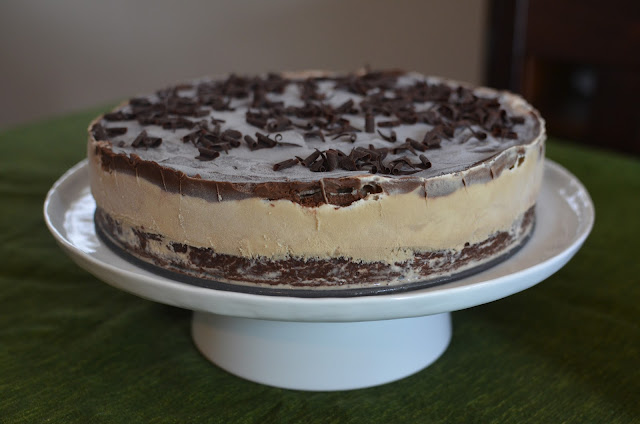 I recently made this cake for the little man's 7th birthday.  It starts with a base layer of dark chocolate cake that's roughly half-baked since we're going after a fudgy effect.  My cake came out a bit more well done than I wanted even baking it a couple of minutes less than the suggested time so I need to pay more attention to that next time.  I can't tell you how great the house smelled while this very chocolaty cake was baking.  It was delicious (think: chocolate bar, brownie, fudgy intense chocolate) but I have to warn you - it hardens quite a bit after freezing so it takes some muscle to slice through.  Next time, I'm going to bake it for even less time and see if that helps keep it softer. 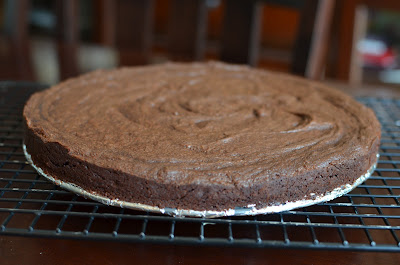 Over the cake, spread on the ice cream flavor of your choice.  The little guy picked coffee ice cream - he likes coffee flavored desserts more than I do and one of his favorite sweets is coffee macarons!  But use any flavor ice cream you love.  The original recipe uses raspberry ice cream.  For me, I might've gone with vanilla here or mint would be delicious. 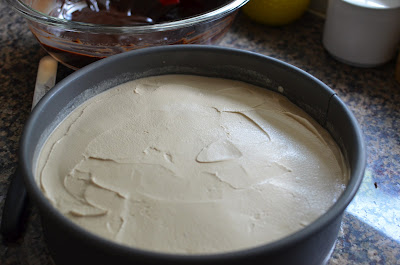 Finally - to really take things over the top - add a layer of luscious dark chocolate ganache over the ice cream.  The ganache firms up but remains relatively soft and smooth even after freezing.  The overall effect is fudgy ganache, icy cold ice cream, and fudgy, almost-chewy dark chocolate cake. 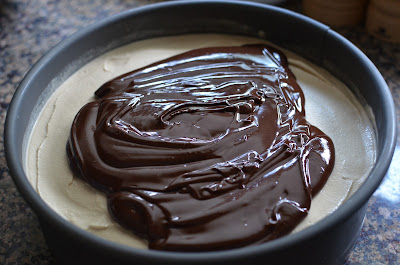 This cake certainly makes a great summer birthday cake.  It's also great for a nice crowd after a barbecue or any summer gathering. 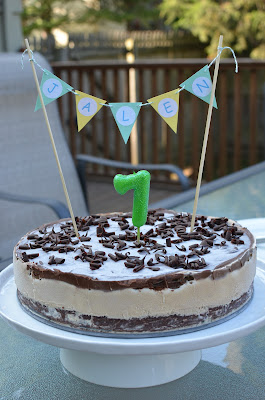 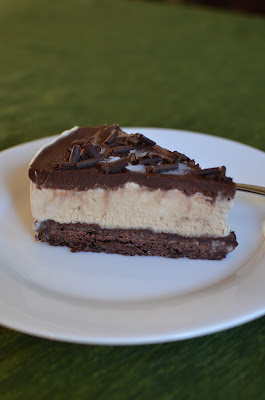 The recipe for this ice cream cake comes from the book, Chocolate Cakes by Elinor Klivans, with a couple of minor adaptions that I made.  In the book, it's called "fudge-on-fudge raspberry ice cream" and you can adapt it to whatever flavor ice cream you prefer.

This cake is assembled using a 9-inch springform pan with removable sides.  Start by wrapping the bottom with foil and buttering the foil and sides of the pan. 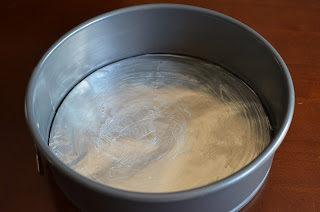 To make the thin chocolaty bottom layer, start with plenty of chocolate - 6 oz. semisweet and 2 oz. unsweetened to be exact.  Melt the chocolate with 3/4 teaspoon of espresso powder (optional - I used espresso powder since it's what I have around instead of instant coffee granules as per the recipe) and half a stick of butter, then set it aside to cool a bit.  I could do this all day... 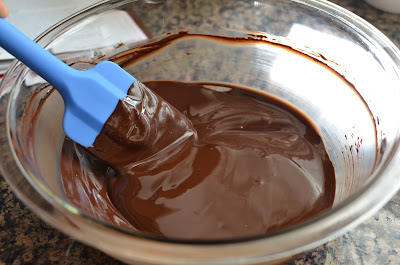 Beat 2 eggs and 2/3 cup sugar together in a stand mixer for about 3 minutes, until the mixture is fluffy and light in color, scraping down the bowl as necessary.  Add a teaspoon of vanilla extract and then mix in the cooled chocolate on low speed. 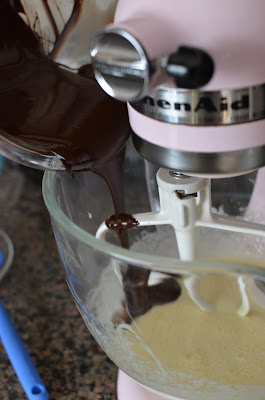 Once the chocolate is incorporated, stir in the dry mixture of 1/2 cup flour, 1/4 teaspoon baking powder, and 1/4 teaspoon salt.  Mix until just incorporated.  Spread the thick fudgy chocolate cake batter into the prepared springform pan and bake in a preheated 350 degree oven for 15-20 minutes. 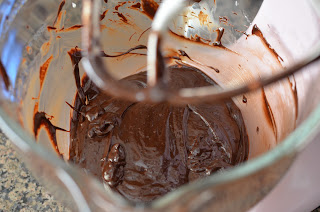 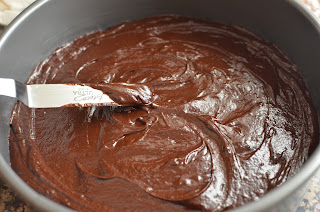 Please check the cake early and pull it out when a toothpick inserted into the center comes out with thick batter clinging to it.  The key is to half-bake it so that it's fudgy.  The recipe calls for baking about 20 minutes.  I pulled mine out at 18 minutes and realized I should've taken it out earlier since it had just some bits of batter clinging to it.  Let the cake cool for about 2 hours and enjoy the heavenly chocolate aroma permeating your kitchen.

The middle layer is easy - just spread your softened ice cream flavor of choice over the cooled cake.

You need about 3 pints (1.4L) of ice cream.  I used Breyer's coffee ice cream.  I put the ice cream into a large bowl and let it soften just enough to spread, then used an offset spatula to spread it evenly over the cake.

The last layer of this cake is a dark chocolate ganache.  I made two cups (as per the recipe) but held some back to use for something else.  To make the ganache, I finely chopped up 8 oz. of bittersweet chocolate and poured a cup of hot heavy cream over it.  Whisk it to combine, adding a tablespoon of butter.  Let it sit until it thickens a bit but is still pourable. 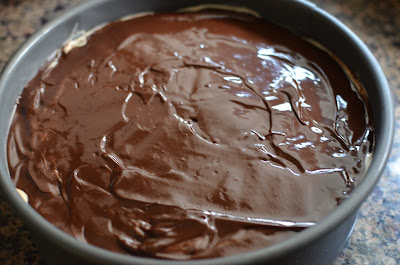 You know homemade things always look kind of "rustic".  My ganache topping was no where near as smooth as pictured in the book.  I used an offset spatula to spread it as evenly around as possible.

Wrap the pan with plastic wrap and then cover the entire thing with foil (make sure to wrap the bottom since ice cream is likely to be seeping out at this point).  Freeze the cake overnight or up to a week or so.

When you're ready to serve the cake, remove it from the freezer and run a knife around the edges to loosen it.  Remove the sides of the pan and transfer the cake to a serving plate.  I "trimmed" the sides of the cake a bit using a knife to make it a teeny bit neater and so you can see the layers better.  I happen to see some Callebaut chocolate curls when I was shopping at Chelsea Market in NYC and bought some (what a shortcut!) to top this cake with.

I have to warn you that the bottom, cake layer, was very hard to slice through for me.  Let the cake sit for a bit on the counter before you slice and be very careful! 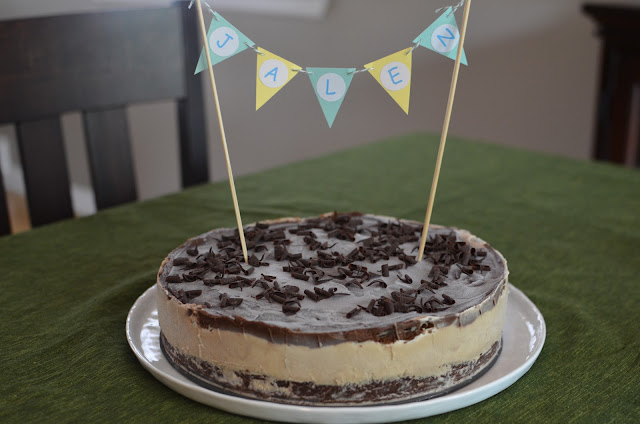 Use a knife that's been warmed under hot water but dried to make each cut.  It's easier after the first piece.  After removing the first piece or so, you'll find the cake can slip right off the springform bottom of the pan so you can even remove that as well. 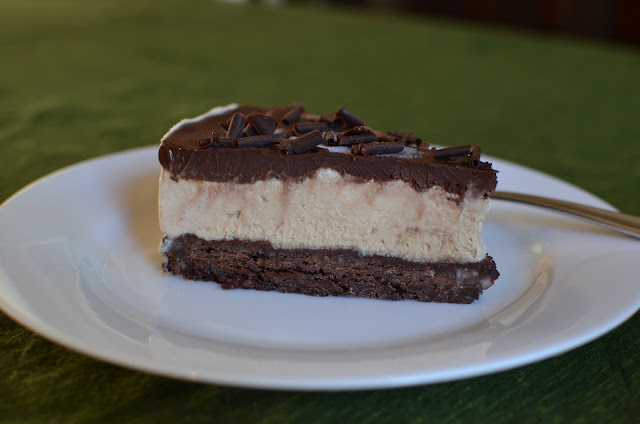 I really like the different layers to this ice cream cake and would make it again.

* Or substitute with any ice cream flavor of your choice.

Preparation:  Preheat oven to 350 degrees, with a rack positioned in the middle.  Remove the sides of a 9-inch springform pan and wrap the bottom with foil.  Butter the foil as well as sides of the pan.

Make the cake:  Stir together and melt the chocolates, espresso powder (if using), and butter in a heatproof bowl set over a pot of barely simmering water.  Remove from the water and set aside to cool slightly.

In a small bowl, whisk the flour, baking powder, and salt together.  In the bowl of a stand mixer, beat the eggs and sugar together until fluffy and light in color, about 3 minutes.  Scrap the sides of the bowl as necessary.  Mix in vanilla extract.  On low speed, mix in the chocolate mixture until blended.  Then stir in the flour mixture until just incorporated.

Spread the thick, fudgy batter evenly into the prepared pan and bake until the center comes out with thick batter still clinging to it, roughly 15 to 20 minutes (check early to avoid overbaking).  Let the cake cool in the pan over a wire rack for about 2 hours.

Pour the ganache over the top of the ice cream.  Tilt the pan to spread it evenly or use an offset spatula.

Wrap the cake, in its pan, with plastic wrap and then aluminum foil (make sure to wrap the bottom as ice cream is very likely seeping out).  Freeze overnight or up to one week.

To serve, remove the cake from the freezer and let it sit for about ten minutes or so.  Unwrap the cake and loosen the sides using a sharp knife.  Remove the sides of the pan and set the cake on a serving plate.  Carefully cut slices using a sharp knife.  I recommend running the knife under hot tap water and drying it in between each cut.  In my experience, the cake layer was quite tough to slice through (particularly when cutting the first slice) so be careful.