I can hardly believe it's been a couple of weeks now since my last post.  It's even harder to believe it's nearly time to bid farewell to summer.  We've had a good break and a nice summer but I'm definitely not ready to end our summer vacation. 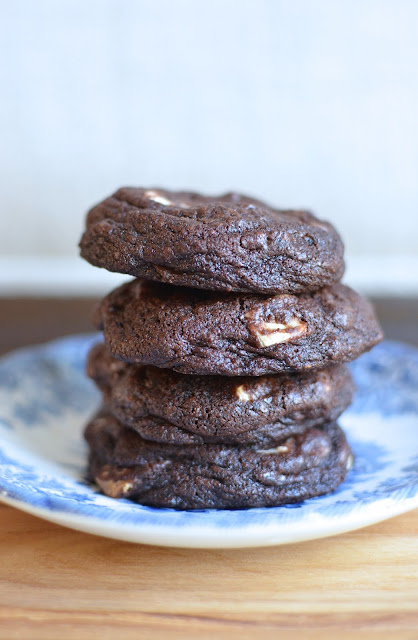 So let's console ourselves with some cookies?  I was inspired to bake these chocolate cookies, studded with white chocolate and semisweet chocolate chunks, after coming home from our recent vacation.  We went on a cruise - our very first!  My son has been asking and asking to go on one (since hearing so much about it from my sister, who is a seasoned cruiser) and we finally set sail recently for a few days to Bermuda. We had a nice, relaxing time and it was a fun change - the most appealing of which was the luxury and convenience of not having to fly! 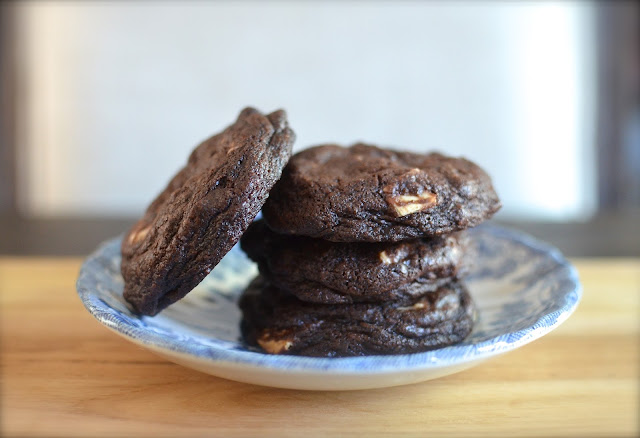 While we were on our cruise, the fellas often stopped for a little snack in the form of a few cookies.  They ate a ton of chocolate ones - soft and slightly chewy, studded with white and dark chocolate chips.  I thought I'd make something similar now that we're home so I whipped up a batch of Ina Garten's chocolate white chocolate chunk cookies.  I opted to use both (mostly) semisweet chocolate and white chocolate.  I'm personally not a big fan of white chocolate but it adds a nice contrast. 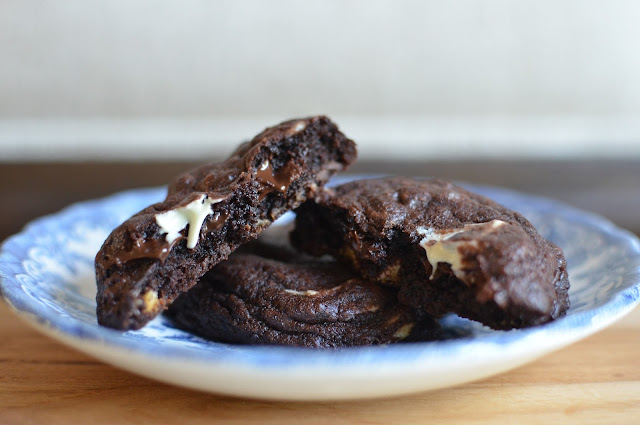 Technically, the cookies from the cruise were labeled "mudslide" cookies; I think of chocolate mudslide cookies as having melted chocolate in the cookie dough (similar to this recipe).  These are simply flavored with cocoa powder, which make it even easier to turn out a batch.  And quite frankly, their sturdy, firm texture really mimic the cookies we had on board the ship.  These are soft, slightly chewy, with plenty of chocolate chunks waiting in every bite.  I am happy I was inspired to make these. 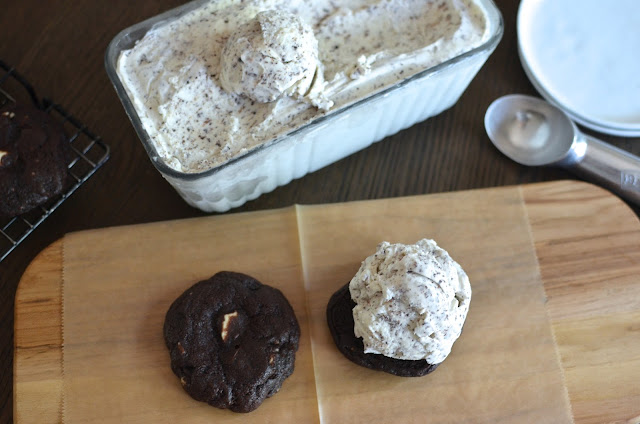 On the home front, I've been fairly busy.  We've polished off most of the goodies and things tucked away in the freezer so I've been motivated to begin anew. Among other things, I made a batch of vanilla ice cream with grated chocolate, and with these cookies on hand, I had to make a few ice cream sandwiches! 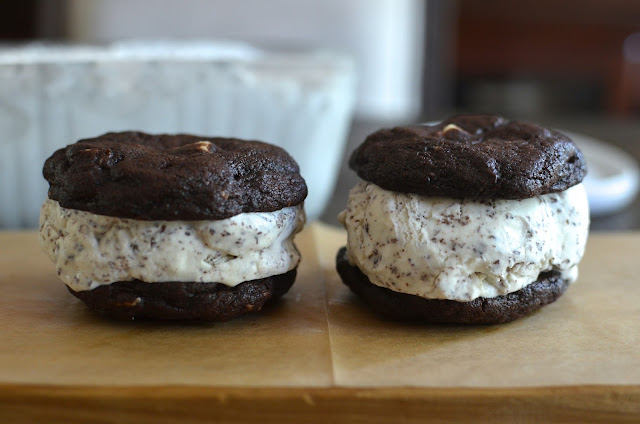 As you can tell, I have a tendency to overstuff my ice cream sandwiches - how about you?

In light of the intense heat, busy days, and oven repair that's been going on here, I come to you today with a quick, cold, no-cook/bake, super-simple frozen dessert. This mango-coconut sorbet takes just 3 ingredients and about 2 minutes to make from start to finish. 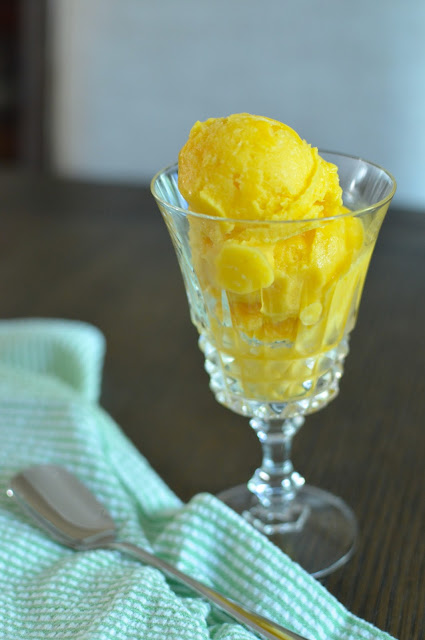 This reminds me of banana "ice cream" because it really is as simple as tossing a few ingredients into a blender and letting it whirl.  I saw the recipe - if we can even call it that because it's so simple - on Ellie's Real Good Food on PBS this past weekend and thought I'd give it a try.

For 2 servings, start with about a cup and a half (8 oz.) of frozen mango chunks.  Add 1/4 cup of light coconut milk and 2 tablespoons of honey.  Then, blend until smooth. Add a bit more coconut milk, as needed, and taste to see if the sorbet is sweet enough for you.  That's it! 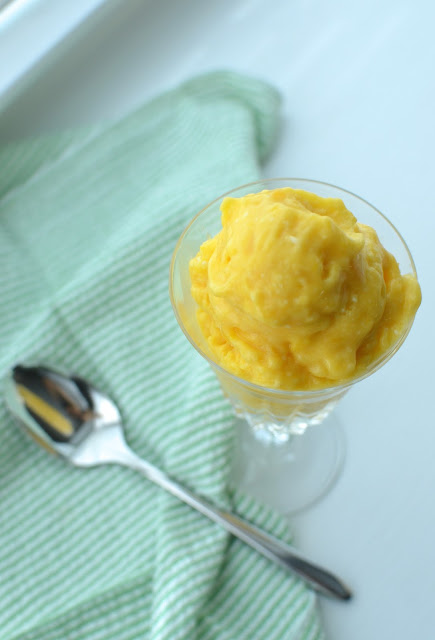 Straight out of the blender, the sorbet is soft as shown directly above.  It's totally ready (and very good) to eat immediately.  If you prefer to firm it up a bit (as shown in the other photos), place the sorbet into a container, freeze it for 20-30 minutes, and then scoop and enjoy. 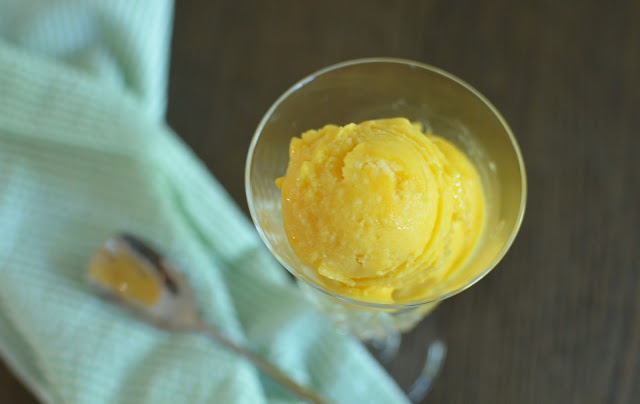 This mango sorbet, with a hint of coconut flavor, is light and refreshing.  I love how it's not cloyingly sweet like many mango sorbets on the market.  And since it takes only 3 ingredients and about 2 minutes, it's certainly worth making right now!

After making that chocolate silk pie recently, I had some extra chocolate wafer cookies on hand.  I decided to put them to use for a couple of these chocolate banana puddings. 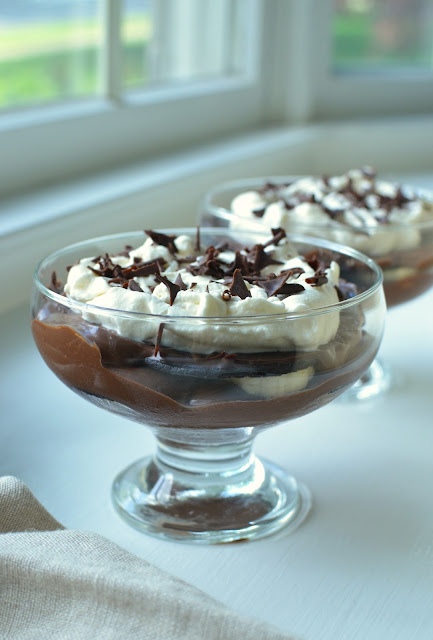 Unlike classic banana pudding, where slices of bananas are layered with vanilla pudding and Nilla wafers, this one has chocolate pudding and those thin "Famous" chocolate wafer cookies. 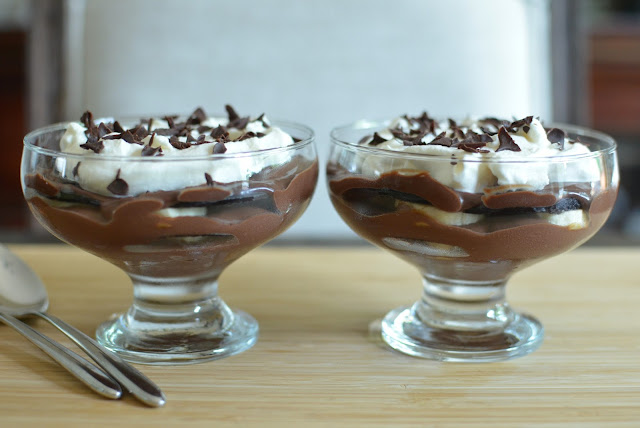 I started by making a relatively simple chocolate pudding, using semi-sweet chocolate.  Once the pudding's done, it's quick and easy to put the chocolate banana puddings together.  I made two individual servings but feel free to double the recipe I've listed and layer it into an 8-inch serving dish to serve family-style.

In my case, I started by spooning a layer of pudding into a serving glass, followed by a layer of thinly sliced bananas, then the chocolate wafer cookies.  I repeated the pattern one more time and topped it with a final spread of chocolate pudding.  After that, I stored the chocolate banana puddings in the refrigerator overnight. 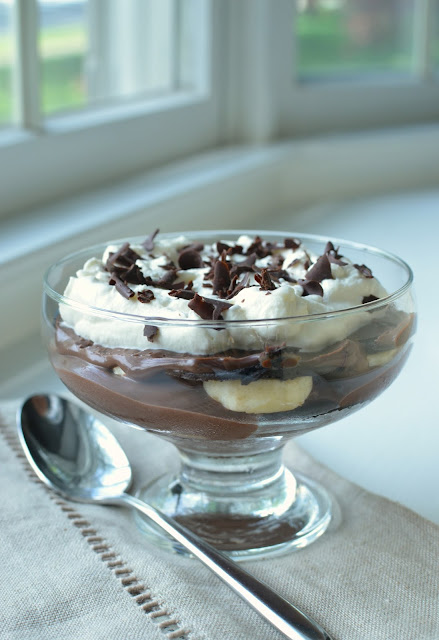 Before serving, I topped them with some freshly whipped cream and chocolate shavings.  My oh my, they were delicious!  I now know why these thin chocolate wafer cookies exist - they magically transform from crisp, dry cookies into soft, moist cake.  What a great shortcut!  And as I took a bite and sampled it, I kept thinking it reminded me of something - something very good.  Then I realized...it was like our favorite banana bread with chocolate chips, which is a very good thing, indeed!  So if any of these words trigger a happy response from you - chocolate, pudding, cake, banana, cool, creamy... - I highly recommend you give this one a try! 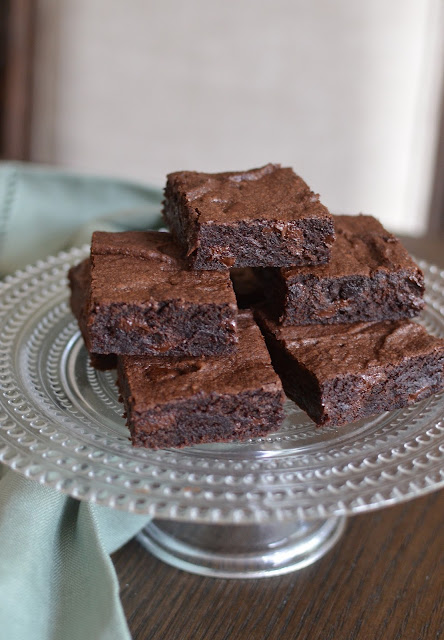 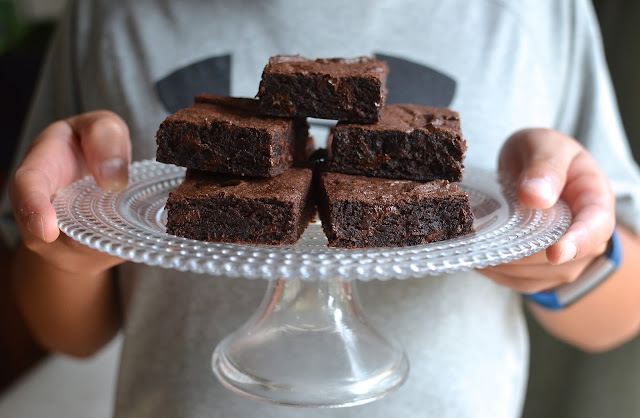 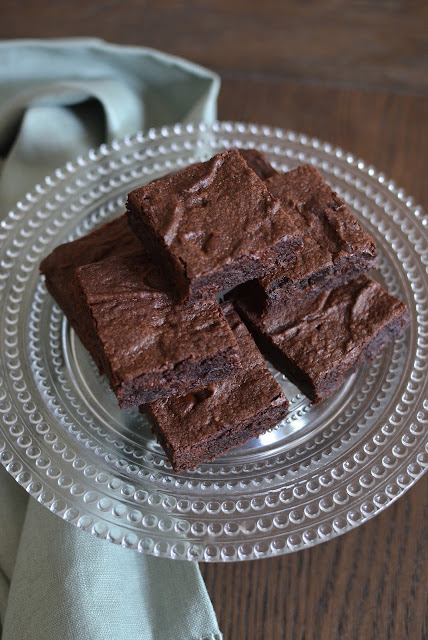 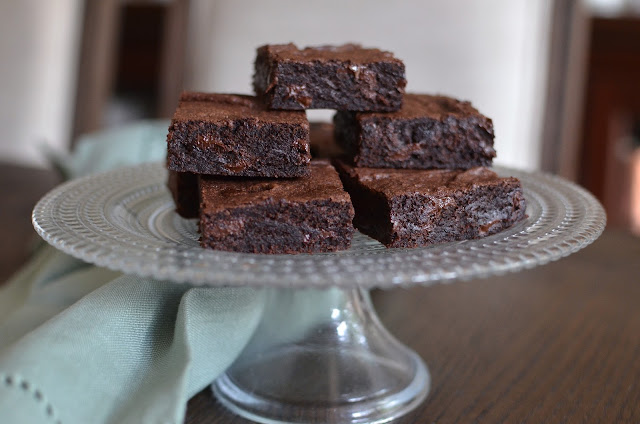 We're staying on the track of decadent desserts today. Think of it as a counterbalance to all the fresh produce and crunchy salads we're consuming during these summer days.  It's all about balance! 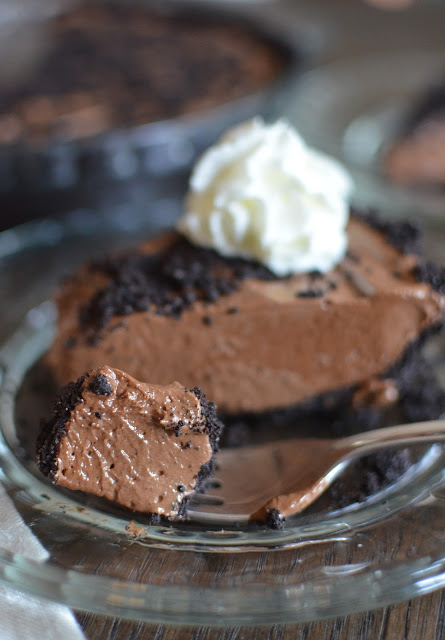 I made a chocolate silk pie for the first time.  It has a chocolate wafer crust as its base and a signature silky smooth, mousse-like, chocolate filling.  My son took his first bite and said "mmm...buttercream" and frankly, I think he was pretty spot on; the filling is like chocolate buttercream so you can picture what we're talking about here. 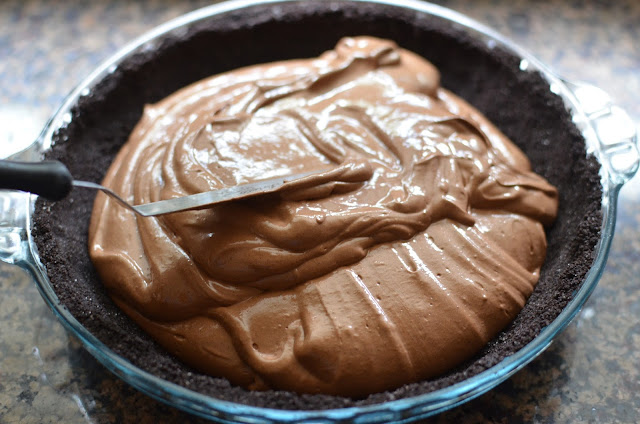 One note of disclosure about chocolate silk pie - it's made with raw eggs.  That isn't a big concern for me personally but it could be for some and I understand that pasteurized eggs is an option to consider.

Though I've thought about chocolate silk pie for some time, I haven't made it until now - not because of the raw egg issue but because my family already has a favorite chocolate (pudding) pie that's a whole lot lighter.  When you find something you like, you tend to stick to it.  That said, I figured it was time to mix it up just a little and give chocolate silk pie a try. 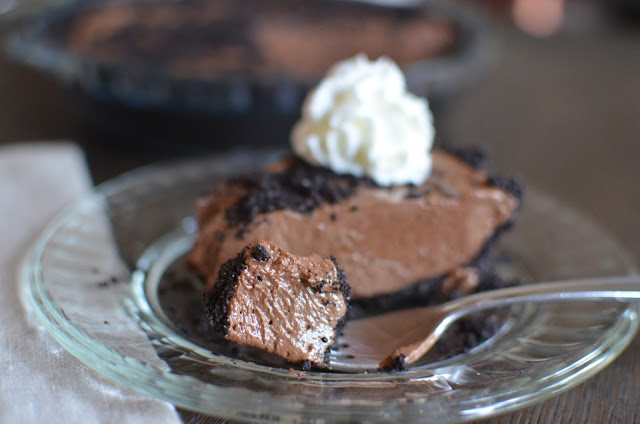 Unsweetened dark chocolate gives this pie unmistakable chocolate flavor while butter gives it serious richness.  The eggs are essential to achieving the silky, mouse-like texture, to the filling.

Make the pie and let it sit at least a few hours to set up before serving.  I'd recommend an overnight chill since we preferred it nice and cold, and thought the flavors were even better with time to develop and meld.  This is as rich and smooth as it looks - a real treat.  Serving small slices, taking the time to savor the rich yet silky lightness of this pie, is the way to go. 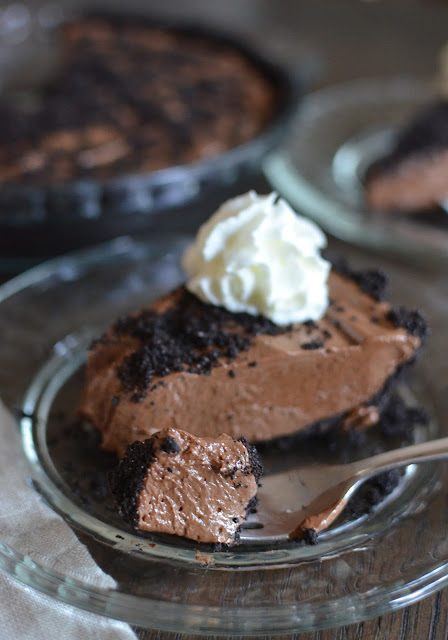 My family really enjoyed this and for me personally, this pie conjures up the chocolate pies I used to eat as a kid.  The difference is those came from the freezer aisle at the supermarket.  I didn't grow up eating many American or European-style desserts but there were a few things we used to buy at the supermarket...Entenmann's for one, a chocolate layer cake from Pepperidge Farm, for another...and lastly, chocolate pie from Sara Lee!  I think it was my brother who started buying those chocolate cream pies and I know I devoured them as a kid, thinking they were the greatest thing!

I'm certainly happy to upgrade myself from those freezer-aisle desserts to homemade but those familiar childhood treats will always have a special place in my heart, and they always bring a little smile to my face when I see them at the supermarket.