One of the reasons I wanted to buy an ice cream machine was so I could make American, or what's called "Philadelphia-style", ice cream. 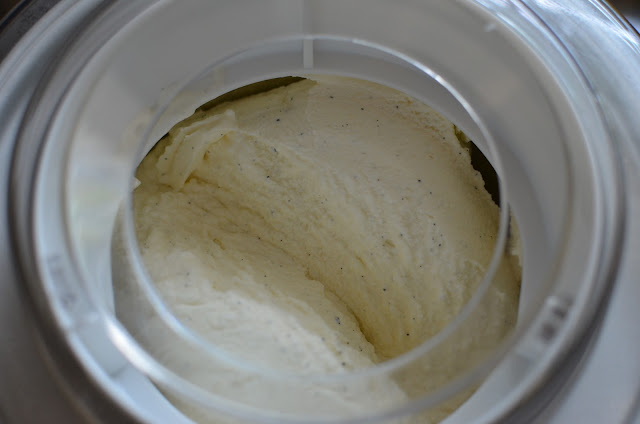 Unlike French custard-base ice cream, Philadelpha-style ice cream has no eggs in it.  Because of that, you can quickly and easily whip up the ice cream base(no custard to cook) but I think it's harder to get a smooth, creamy result doing it by hand for the same reason.  But thanks to my new ice cream machine, I easily made my first batch of Philadelphia-style vanilla ice cream recently. 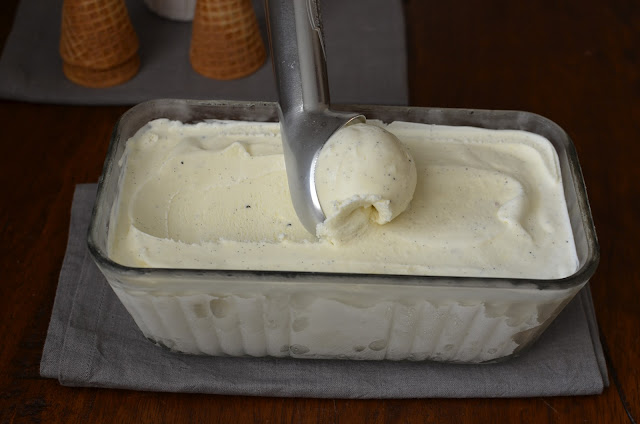 Without any egg yolks (leaving it white in color versus a distinct yellow hue in French vanilla ice cream), Philadelphia-style ice cream isn't quite as rich (which isn't such a bad thing in my book) and I think it also allows a more "clean", pure vanilla flavor to shine through.  Each style has its own merits.  Interestingly, I've never been a fan of "French vanilla" ice cream that you buy at the supermarket (I thought it was too rich) but I adored the homemade version.  Luckily, there's room for both kinds and I am a fan of diversity. 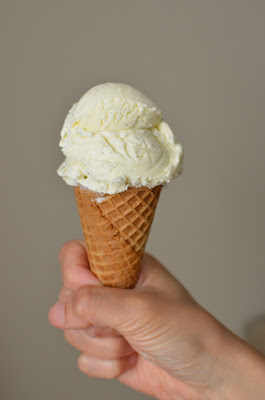 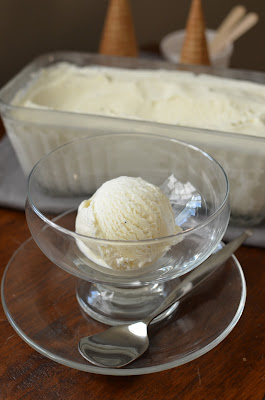 I had heard that homemade Philadelphia-style ice cream may be grainier than its French counterpart and more difficult to scoop as it hardens in the freezer.  I agree that the custard-base ice cream is smoother and creamier but my homemade Philly ice cream was definitely not hard and actually quite easy to scoop even after 2-3 days in the freezer (there was no more after that).  So I guess it boils down to this trade-off:  Philadelphia-style ice cream has an arguably stronger vanilla flavor but French vanilla is creamier, with more of a luscious mouth feel.

If I had to pick a favorite...after making and tasting both versions made in the ice cream maker, I've decided (at least, for now) that Philadelphia edges out as my preference. 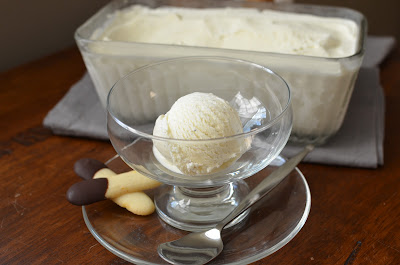 If you are a fan of true pure vanilla bean ice cream, I think it's best to enjoy a scoop or two of this all by itself.  The flavor is delicious but I have to admit I'm not much of a plain-vanilla type girl (when it comes to ice cream...although I wonder how "vanilla" became synomous with "plain" in the first place since the flavor is actually so complex and robust).  I'm a big fan of mix-in's, crunchy add-on's and chocolate thrown into the mix so I plan to play around with this vanilla base in the future.  Since I rarely eat vanilla ice cream all by itself, I made a few individual flourless chocolate cakes to go with it.  My favorite way to "deploy" vanilla ice cream is to have it with warm molten chocolate cake (I paired them up recently with a batch of French vanilla ice cream made in the machine.) 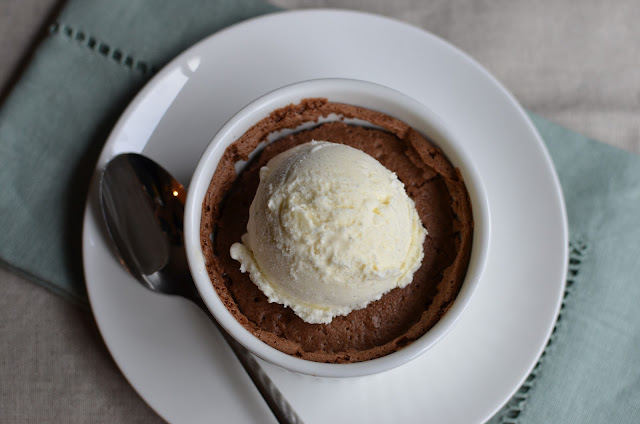 Making Philadelphia-style vanilla ice cream is easy, with no yolks to temper or custard to cook!  I used 2 cups of whole milk and 1 cup of heavy cream for this ice cream (you could use all cream but I'll take any chance to lighten things up just a little).

All you have to do is: Place a cup of cream in a saucepan with 3/4 cup of sugar and a pinch of salt.  Split open a vanilla bean and scrape the seeds out and into the saucepan.  Add the vanilla pod into the pan as well.  Warm the mixture over medium heat, stirring together, until sugar dissolves.  Take the saucepan off the heat and stir in the second cup of cream and 1 cup of whole milk, followed by 3/4 teaspoon of vanilla extract.  Done! 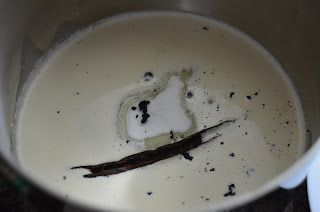 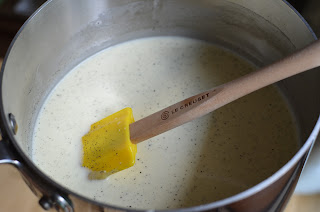 You do need to cover and chill the mixture before churning.  I refrigerate it overnight.  Right before churning it in your ice cream maker according to the manufacturer's instructions, remove the vanilla pod.  In roughly 20 minutes, I had smooth, vanilla-scented ice cream!  I transfered it to a storage container to firm up further in the freezer.  It's always good to sample some first though. 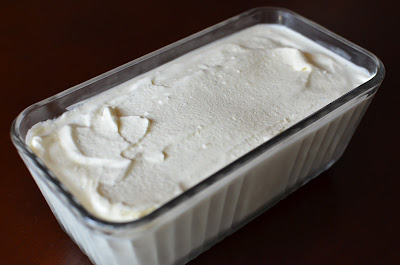 After a few hours in the freezer, we were ready to enjoy a very flavorful vanilla ice cream. 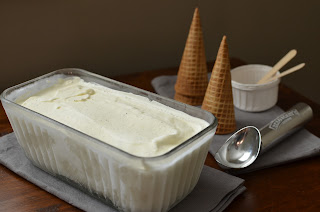 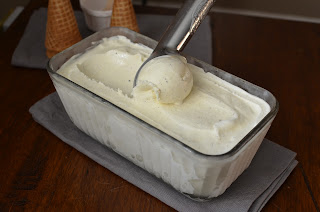 In case anyone is interested, I made a few individual chocolate flourless cakes to eat with this ice cream.  I was inspired by the flourless chocolate cupcakes recipe in Martha Stewart's Cupcakes book, which I quickly realized was exactly this recipe in cupcake form.  I thought these would be too messy as cupcakes so I went with individual ramekins, which then made me realize that this recipe is practically the same as a soufflé!

I divided the recipe in half and poured the batter roughly 3/4 way up into buttered ramekins (amount you get depends on size of your ramekins).  Bake for about 25 minutes at 350 degrees, until cakes are puffed and just set.  The tops deflate as the cakes cool. 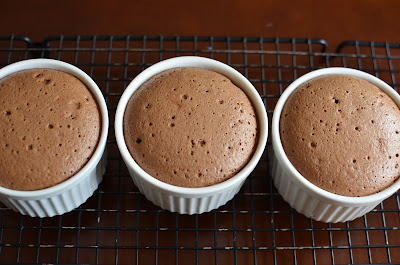 This flourless chocolate cake is far from dense or rich.  It is light, very much a fallen-soufflé type cake.  All it needed was a scoop of homemade vanilla bean ice cream. 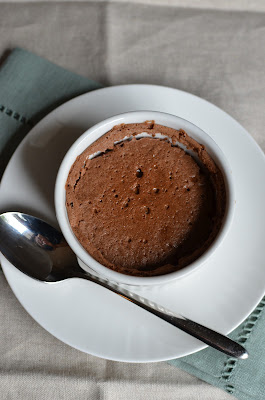 * Alternatively, you could use 3 cups of cream


Place 1 cup of the cream into a medium saucepan with the sugar and salt.  Scrape the seeds from the vanilla bean into the saucepan and add the pod as well.  Warm mixture over medium heat, stirring together, until sugar dissolves.

Remove the saucepan from the heat and stir in the remaining cup of cream and whole milk.  Stir in vanilla extract.

Cover and chill the mixture thoroughly in the refrigerator.  When ready to churn, remove the vanilla pod from the mixture.  Freeze according to your ice cream maker's instructions.

Transfer freshly churned ice cream into a storage container and place it in the freezer to firm up further.