For my birthday this year, my husband and I had a romantic dinner at New York restaurant, La Grenouille.

I used to work in midtown and pass by La Grenouille often as I rushed to and from work or zoomed past on my lunch break (because you are constantly rushing in NYC, it seems), but I've never eaten there.  The restaurant is something of a New York City hallmark having been in business for 50 years and is known for classic French cuisine as well as its amazing floral arrangements.  I used to peer into the window when I walked past and see glimpses of flowers and people.  And for whatever reason I thought of this and wanted to go there for my birthday this year.﻿
When I walked into the restaurant, my first impression was the smell.  It wasn't the aroma of food but flowers.  There were small arrangements of white roses at each table and more dramatic, towering floral arrangements in tones of white and green placed around the dining room.  Setting foot in there felt a bit like stepping into a little oasis.  I may not have been totally at ease at first as my husband and I were seated side by side at one of the red banquettes and tried to figure out the protocol of this iconic French restaurant, but the combination of polite service, good food, and terrific company had me relaxed and enjoying the meal more and more as the night went on.  It was a memorable birthday dinner...my husband and I shared a lot of whispers and laughs as we snuggled up in our little banquette.

Now, I think I better get to the soufflé.  It's not often I see soufflé on a restaurant menu (and I mean real soufflé, not just a flourless cake) and if it's there, hopefully, there's a good reason.  La Grenouille is known for theirs and I certainly intended to order one for dessert.  I was surprised to hear a wide selection to choose from (Grand Marnier, coffee, caramel, pistachio, and lemon were among the few I remember) but of course I went with chocolate, in a medium size, which is more than enough for two.

Let me tell you we were not disappointed (and glad we didn't order a small)!  Our chocolate soufflé was rich, warm, moist, chocolaty - really as good as a soufflé is going to get.  The waiter came to show us the lofty creation and then stepped aside to plate it for us.  I was struck by how relatively firm (in a good way) the soufflé was - the way it maintained its structure on our plates despite being cut and split - while being fluffy and moist.  The warm soufflé was served with chilled whipped cream, which I took liberal portions of.  Each bite was heavenly and a wonderful cap to the meal.  We also had a vanilla eclair and sampled some petite fours but those pale in comparison.

As you can tell, I can talk about food all day or for pages on end!  For the sake of brevity (maybe too late now), I'll tell you that I found the recipe for La Grenouille's Grand Marnier soufflé when it was published 10 years ago on its 40th anniversary.  Even though we opted for the chocolate when we were there, I couldn't resist giving the recipe a try and paying a little homage to our recent dinner.  It wasn't very smooth sailing for me when it came to this recipe but all's well that ends well...although what was intended to be 3 soufflés ultimately turned into just one. 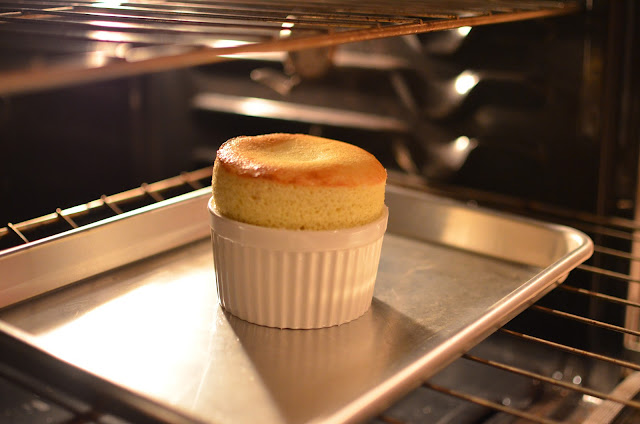 Maybe dividing the recipe in half wasn't a good idea in this case.  Or it could've been rushing to make the pastry cream in the middle of the afternoon before heading out that messed things up.  I couldn't get the pastry cream to thicken as I imagined it should from previous experience and, let me tell you, hiking up the heat and trying to rush things truly does not work!  So I ended up with far less pastry cream than I intended.  It never quite thickened up as much as I figured it should but as you can see, a lone Grand Marnier soufflé did materialize.  Much like the one at the restaurant, I noticed the soufflé from my oven was likewise firm and sturdy on the top and moist in the center so maybe I wasn't too off the mark. 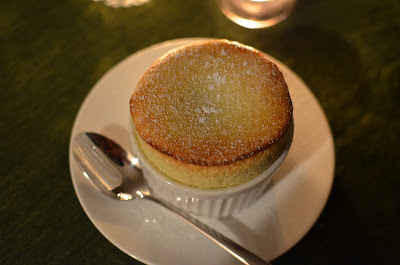 This calls out to anyone who enjoys Grand Marnier.  With no other major accompanying flavors other than vanilla in the pastry cream, the Grand Marnier is quite distinct.  On the other hand, if you like a softer touch and, say, chocolate with Grand Marnier, check out this recipe. 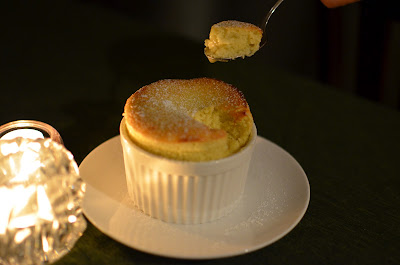 Thinking back to my birthday dinner with my hubby at La Grenouille puts a smile on my face.  I'm always grateful to make happy memories.

Like other soufflé recipes, La Grenouille's Grand Marnier soufflé is made in two parts.  First, you make a vanilla pastry cream.  Once made, store it in the refrigerator to let it set up further. 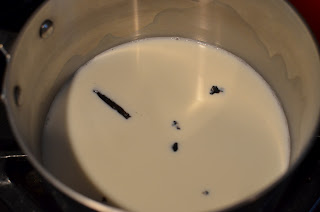 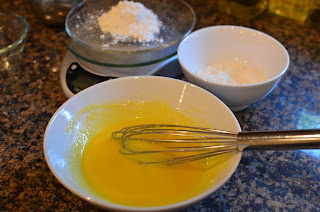 (Note: As I mentioned earlier, I was not very successful with this pastry cream.  It didn't thicken the way I expected and I over-heated it to the point that when I strained the mixture, I had tell-tale signs of cooked eggs.  It didn't help that I had divided the recipe in half and was cooking the mixture in a wide saucepan and hiked up the heat when things didn't seem to be moving along.  So learn from my mistakes and, at the very least, cook low-and-slow.) 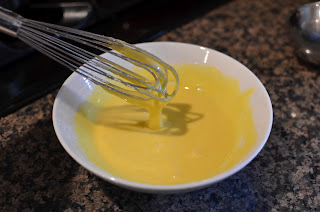 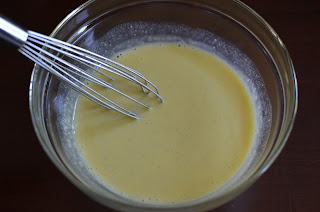 The second part of the soufflé is the egg whites.  I've learned that soft peaks may well be the key if you want your soufflé to puff up properly to the lofty height you are crossing your fingers for (at the very least, don't overwhip it).  In this case, the Grand Marnier is added to the pastry cream when you're ready to bake and then the whipped whites are gently folded into it in two parts. 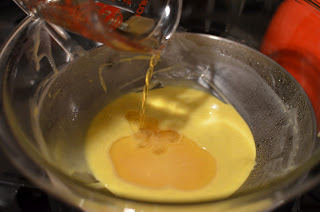 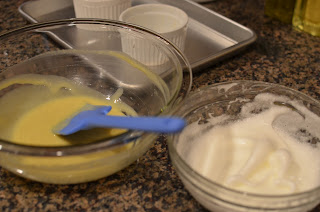 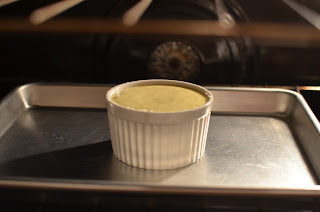 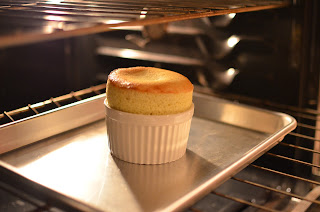 Each soufflé is intended to be baked in a 5" wide and 2" deep ramekin.  Mine are closer to 3 1/2 inches wide so I had just enough batter to make the one shown above and a slightly smaller one.  I was grateful to get what I did!

Recipe that I used can be accessed directly: here via New York Magazine

- Measurements in this recipe are given in grams so you will need a scale.

- The recipe doesn't say so but I recommend straining the finished pastry cream through a fine mesh sieve to catch any cooked bits and get as smooth a cream as you can.

- The recipe for the pastry cream is enough for 6 servings but measurements for making the soufflé is for each individual, one soufflé.

- So if you plan to use all the pastry cream and make the entire 6 servings possible as per the recipe, you will need more egg whites than what you reserved from the egg yolks used to make the pastry cream.