I think I knew all along it was inevitable.  Yes, I am now the owner of an ice cream maker!  I tried to hold out, knowing that having one could/would lead to excessive ice cream consumption and an expanded waistline.  But in the end, I couldn't resist.  Those  homemade ice creams I made without a machine were delicious and I kept thinking how easy and better it would be if I had a machine.  I was also swayed by the idea of all the flavor possibilities and frozen treats I could explore for years to come.  So it's a good investment, right? 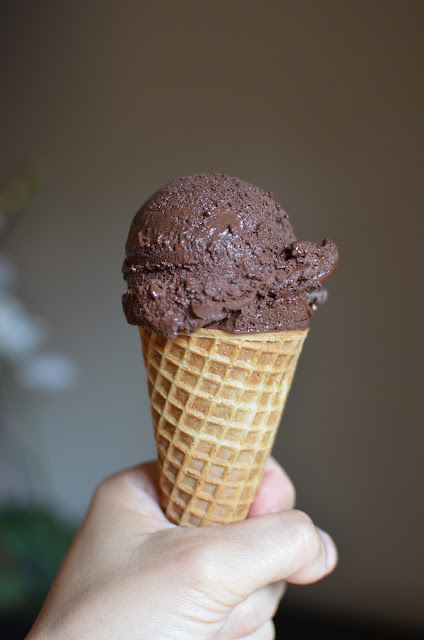 For my inaugural batch of ice cream from my new ice cream maker, I actually went with gelato - something a little lighter.  It's chocolate gelato, to be exact.  It may be nothing new but on a recent road trip to Vermont (Hello, Ben & Jerry's!) and Quebec, Canada, I kept noticing ice cream, or actually, gelato, everywhere.  In the hot touristy spots (it was "hot" literally), there was an ice cream/gelato/crème glacée shop on every block and every other person seemed to be carrying a cone or cup of it around.  That's what I love about summer vacations: ice cream!  And the blanket approval to indulge. 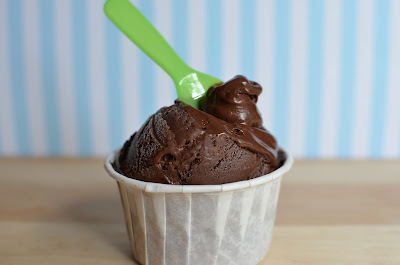 These days, gelato is as common as ice cream.  And the difference between the two?  "Gelato" is the Italian name for ice cream and the lines blur between the two but I've learned that, in general, gelato has a lower fat content (yay!) than ice cream, which allows the flavor to stand out and shine.  It is a little denser than ice cream, churned at a slower pace to give it a velvety texture despite the lower fat content, and stored at a slightly higher temperature than ice cream (at a gelateria).  Some gelato have egg yolks in them, some don't.  When gelato is thickened with starch instead of eggs, you might find it has a somewhat sticky texture. 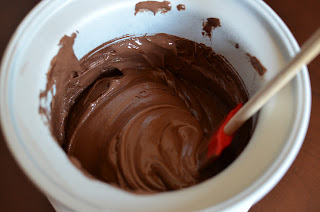 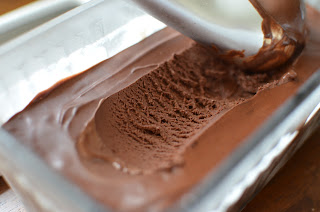 Now what I personally like about gelato is the flavor choices.  I love a basic dark chocolate, like what I made here, but I'll usually find other favorites like gianduja (hazelnut and chocolate) and pistachio.  On a recent vacation in Quebec, we ate lunch in an airy self-service style cafe one day.  After our sandwiches, I made a beeline for the dessert and gelato offerings in the front of the shop.  I had a great dessert fix that afternoon.  The gelato was divine.  I was excited to score a scoop of chestnut gelato (the light-vanilla colored part of the cup below)!  I love chestnuts and it was my first taste of chestnut gelato.  It was subtle yet distinctly chestnut; I thought it was wonderful.  The other flavors I picked were dark chocolate and gianduja - the flavors really popped, a real trademark of good gelato.  Did I mention there was a slice of opera cake involved too?  It was a good afternoon... 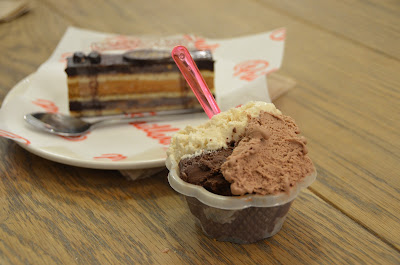 This chocolate gelato recipe I made comes from the dessert/ice cream whisperer, David Lebovitz (of course!).  This batch I made was gobbled up in two days by the 3 of us.  We loved how it was rich but light at the same time; it truly is the lighter version of the chocolate ice cream recipe I made previously.  This gelato only contains milk, no cream, relative to its ice cream cousin.  I dare say we actually preferred this gelato to the richer ice cream but ask me next time I taste the ice cream and I might give a different answer. 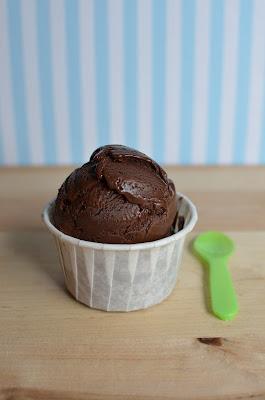 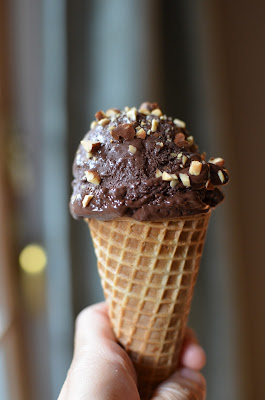 Do you go for a cup or a cone?  I love sugar cones and I think a cone helps with portion control at home.  A cup is less messy though.  My son is strictly on the cup side.  He can be a surprising purist at times.

This chocolate gelato recipe starts with 5 ounces of chopped dark chocolate.  Set it aside in a large bowl while you whisk together 1/3 cup of unsweetened cocoa, 1 cup of milk, and a pinch of salt in a saucepan. 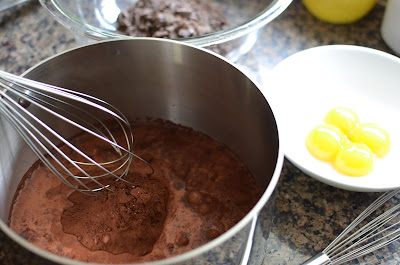 Cook the mixture to a boil then pour and scrape the whole thing over the chocolate.  Stir together until chocolate is melted and the mixture is smooth.  Set a mesh strainer nearby. 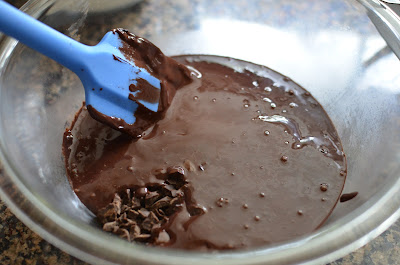 Using the same saucepan, warm the remaining, 2nd, cup of milk with 3/4 cup of sugar.  Stir until sugar is dissolved.  Whisk 4 room temperature egg yolks together in another bowl.  Add some of the warmed milk and sugar mixture to the yolks, whisking as you go.  Scrape the now warmed yolks into the saucepan and cook the entire mixture over low heat, stirring constantly, until the custard thickens enough so that it coats the spatula.  It should register between 170 to 175 with a thermometer. 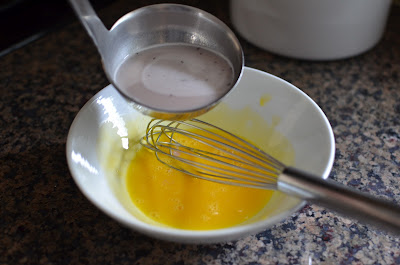 Pour the custard through the strainer into the chocolate mixture.  Stir together until smooth and combined. 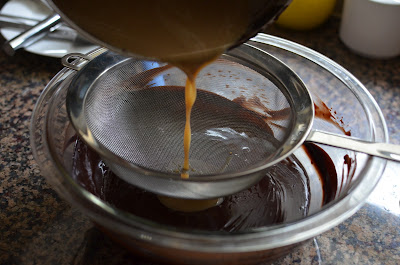 Set the mixture over an ice bath to cool it down, stirring occasionally.  Once cover with plastic wrap and refrigerate until thoroughly chilled.  I understand that the colder the custard, the better texture (creamier) ice cream/gelato you'll get. 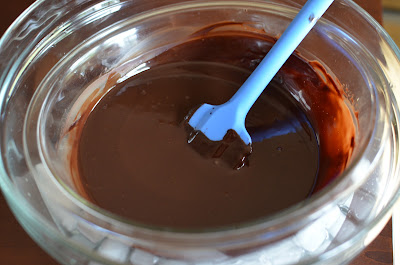 When you're ready to churn the gelato and the custard is fully chilled (preferably overnight), you'll find that it's fairly thick right out of the refrigerator.  Give it a quick whisk and then freeze in your ice cream machine, according to the manufacturer's instructions. 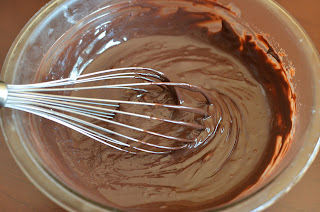 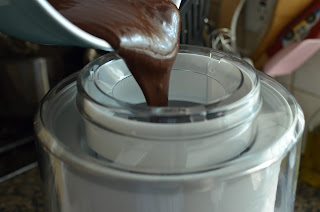 In about 20 minutes, I had beautiful chocolate gelato.  I love the machine - it's like magic! 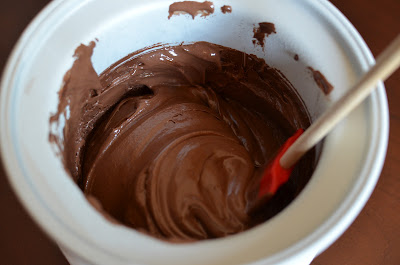 I transfered the freshly-churned gelato to a new rectangular glass storage container I bought specifically for the job.  Pop the gelato into the freezer to firm it up further (and for the flavors to meld together).  I also picked up an "old-fashioned" ice cream scoop from Ben & Jerry's in Vermont; it is a must for easily scooping up homemade ice cream and gelato! 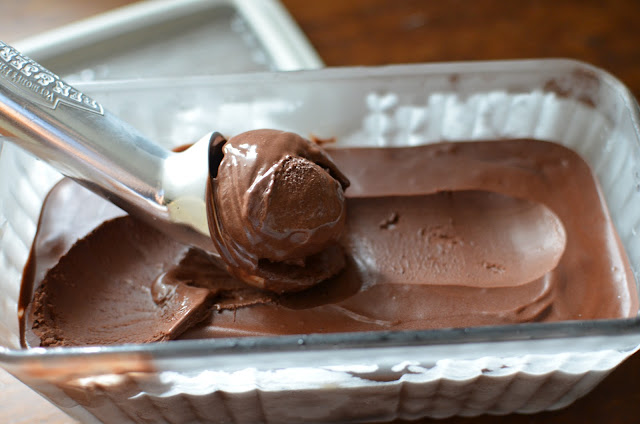 Chocolate Gelato
From Ready for Dessert by David Lebovitz

In a saucepan, whisk the cocoa, 1 cup of milk, and salt together.  Bring to a full boil, then pour/scrape the entire mixture over the chocolate.  Stir together until chocolate is melted and the mixture is smooth.  Set a mesh strainer nearby for the next step.

Using the same saucepan, warm the remaining 1 cup of milk with the sugar.  Stir until sugar dissolves.  Whisk egg yolks together in another bowl.  Add some of the warmed milk and sugar mixture to the yolks, whisking constantly while you pour.  Scrape the warmed yolks back to the saucepan and cook the mixture over low heat, stirring constantly with a heatproof spatula, until the custard is thick enough to coat the spatula.  If using a thermometer, the mixture should read between 170 to 175 degrees.

Pour the custard through the strainer into the chocolate mixture.  Stir well to combine.

Set the custard over an ice bath (larger bowl container ice and water).  Stir until cool, then cover and refrigerate until thoroughly chilled.

Freeze in an ice cream machine according to manufacturer's instruction.  Transfer the gelato a freezer safe container to allow it to firm up further in the freezer.