I made ice cream (without a machine)!

I am very excited to show you my first batch of authentic homemade ice cream! 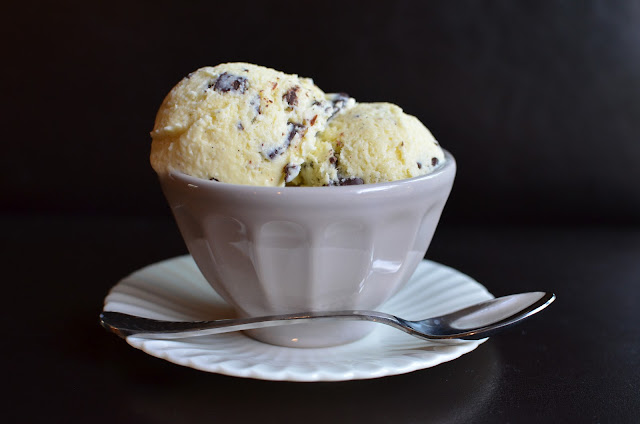 I made it by hand, without a machine, using the freeze and stir method described by David Lebovitz (whose recipes have yet to steer me wrong).  It sounded like the simplest option to me, somewhat similar to making granita.  And for my first endeavor, I stuck with a basic flavor, vanilla, and stirred in some dark chocolate at the end to make what's called "Stracciatela" (the Italian name for a vanilla based ice cream with small pieces of chocolate bits in it). 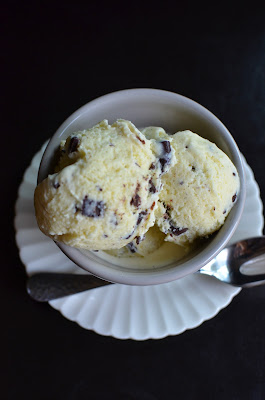 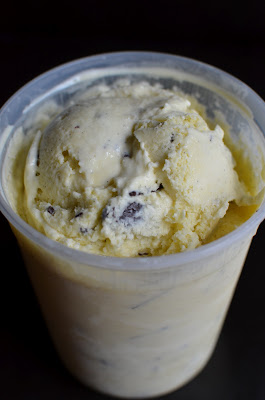 This isn't very eloquent but let me say that homemade ice cream is like "woah!"  It is some serious deliciousness and tastes a lot better than what you'd find in the freezer aisle.  In this case, I can really taste the pure vanilla flavor that comes from the fresh vanilla beans.  The vanilla ice cream is the star of the show but the bits of crunchy chocolate is a nice added bonus.  I love incorporating chocolate somehow into my dessert and I love having some crunch in my ice cream.  Is anybody else with me? 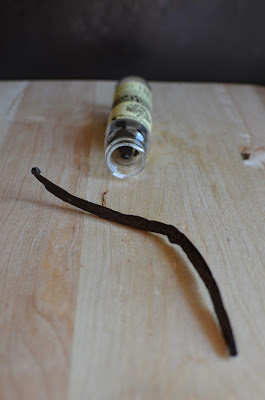 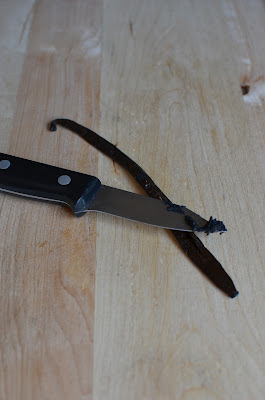 And I do love ice cream.  You probably know how I feel since I can't think of a single person I know who doesn't.  When I used to work in midtown, I'd sometimes take a walk during my lunch break and occasionally, I'd just grab an ice cream cone with mint chocolate chip ice cream for lunch while roaming around.  It made me very happy.  Nowadays, I may be better at portion control and no longer enjoy the soup bowl variety (those were the days!) but I still love myself some ice cream! 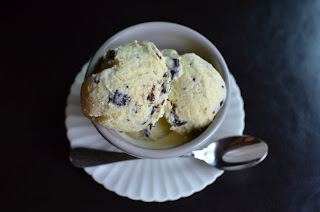 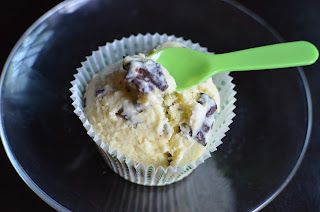 And that brings me to the fact that I've wanted to try making my own ice cream.  Just for fun.  I guess you just want to make things you love to eat.  I don't have an ice cream machine, however, and I really don't want one mainly because it would encourage too much ice cream making and eating on my part.  Secondly, I don't want to invest in another piece of equipment that I have no space for.  So if you're like me and interested in making a batch of ice cream without a machine, check out this post from thekitch.com which addresses that very question submitted by yours truly. 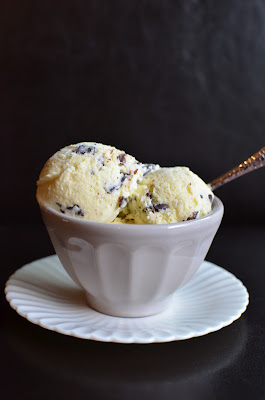 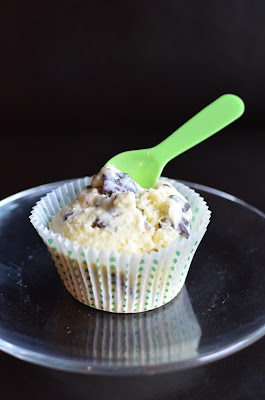 I was a little nervous about this ice cream when I was making it but in the end, my family and I agree that it came out great.  I had a nagging concern that maybe I didn't cook the custard long enough and for some reason, the ice cream didn't seem to firm up very well.  But I guess homemade ice cream doesn't firm up the way you might expect and you need to scoop it into a container and let it freeze further for several hours.  I did that and it turned out great in the end.

Handmade ice cream done this way may not be as smooth and creamy in texture as the kind churned by machine but we have no complaints.  My son proclaimed it "really good" - eating the majority of the batch - and that makes me so happy.  I highly doubt I'll be able to resist taking another go at homemade ice cream before the summer's out.

Update (August 18, 2012):  I know it defeats the purpose of this post somewhat but I did, inevitably, buy an ice cream maker recently.  Here is this French-style vanilla ice cream churned by the ice cream maker.  The benefit to using the machine is clearly time savings and texture.  But both handmade and machine-churned taste delicious! 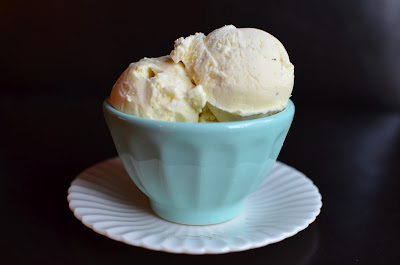 Making the vanilla custard base

The recipe I used to make the vanilla ice cream comes from David Lebovitz.  It's French-style ice cream, or custard-base, using egg yolks (vs. Philadelphia style which does not use egg yolks).

Heat a cup of whole milk, pinch of salt, and 3/4 cup of sugar in a saucepan.  Scrape the seeds from a vanilla bean into the milk.  Add the seeds, as well as the pod, into the milk.  Cover the pan, remove from the heat, and let the milk and vanilla mixture seep for an hour. 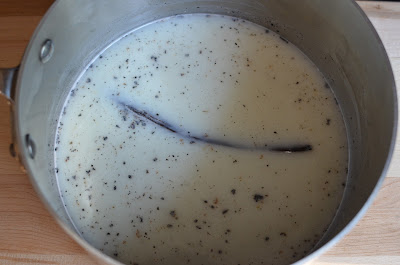 After an hour, set up an ice bath by setting ice and water into a large bowl and placing a smaller one into it.  Pour 2 cups of heavy cream into the smaller bowl and have a strainer ready. 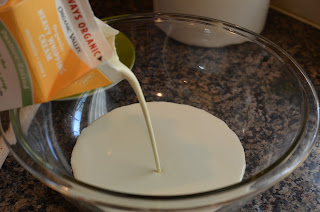 Then it's time to finish the custard by adding some tempered egg yolks into the milk and vanilla mixture.  I used 5 egg yolks.  Lightly whisk them together in a bowl.  Rewarm the milk mixture and then slowly add some of the warm milk into the yolks, whisking constantly to make sure you don't cook the yolks.  I added about 1/3 cup or so of milk and then scraped the milk and yolks back into the saucepan. 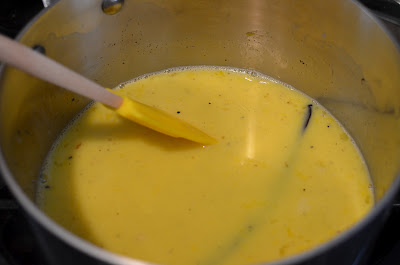 Cook the mixture over low heat, stirring constantly (again, so yolks don't cook and things don't curdle) and scraping the sides of the pan, until the custard thickens enough to coat the spatula.  This process took me about 15 minutes and I keep thinking maybe I should've cooked it a little more.  Since there's no cornstarch or cream in the mixture, I thought it was hard to tell when the custard was thick enough.  Now I've done some research and found out the mixture should be at 170 degrees.  If you have a thermometer like I do, use it to make sure it's cooked properly (I will next time).

Once done, strain it into the heavy cream that's set in the ice bath.  Straining is a must - it captures those bits of membrane that connects the whites to the yolk and any other potentially cooked bits.  Remove the vanilla pod. 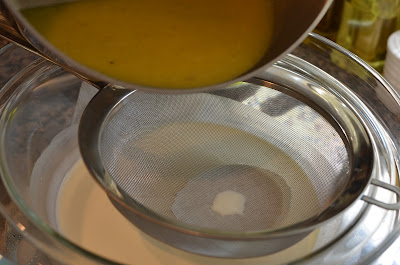 The custard is beautiful and done.  If you were proceeding with an ice cream maker/machine, you'd chill the custard overnight.  Colder is always better when it comes to ice cream.  My instructions for making by hand said to chill the custard over the ice bath so I simply stirred it for a while in the ice bath to make sure it was chilled and then proceeded.  Looking back, making the custard the day before and chilling it in the fridge overnight would certainly not hurt.﻿﻿﻿

The instructions I followed can be found here.  As you can tell by the name, you basically let it freeze the custard but check on it fairly frequently to stir it and break up any ice crystals.  We're trying to mimic that churning process from the machine.  Doing it this way obviously doesn't produce as smooth a result but it's still very good.

I poured my cooled vanilla custard into a 9x13 inch baking pan and set it in the freezer for about 45 minutes.  Take it out of the freezer and stir it up good.  I use a sturdy spatula to move it around and get into the corners but also a whisk to give it a good mix.  Return it back to the freezer and continue to check on it, stirring it up, every half hour or so until it's almost frozen. 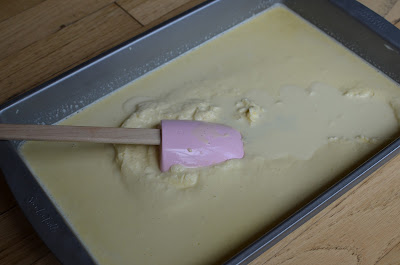 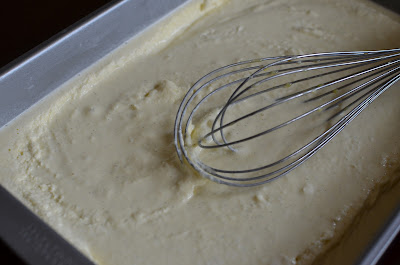 This process took me well over 4 hours.  Things were freezing up rather quickly at first but then I found it turning mostly back to liquid after whisking.  I stored my pan near the bottom of my fairly packed freezer so it might've had something to do with it.

Eventually, I deemed it as ready as it's ever going to be.  Before transferring it into a covered container to firm up further, I added melted dark chocolate to make "Stracciatella" ice cream - or the Italian style of vanilla ice cream with chocolate chip, which isn't really chocolate chips but bits of chocolate. 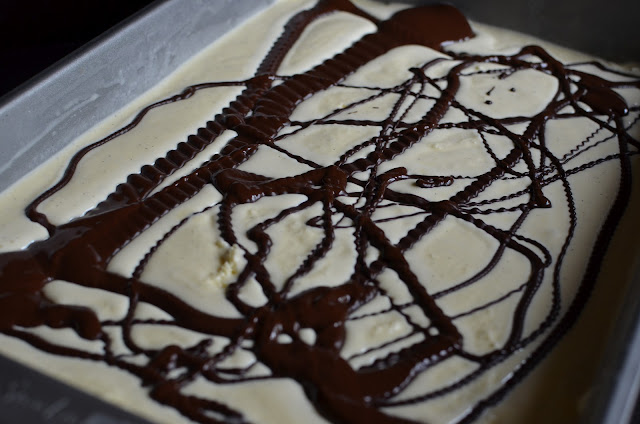 From past experience, I realize that the melted chocolate hardens quickly when poured on top of a frozen (or near frozen) surface but with taking the pictures and all, I had a difficult time breaking up the chocolate into little pieces with stirring.  I would recommend doing this in batches - pour some in, stir immediately and repeat.  In the end, both the big and small chunks of crunchy chocolate worked out quite well and became rather addicting the more we ate it.

For ease in scooping, I think many people recommend storing ice cream into a relatively wide container (even a bread loaf type pan that can go into the freezer).  I opted for the plastic take-out container for convenience and to save space in my freezer.  Transfer the ice cream to your container of choice, cover, and freeze until ready to eat.  I also cover the top with plastic wrap, directly touching the surface. 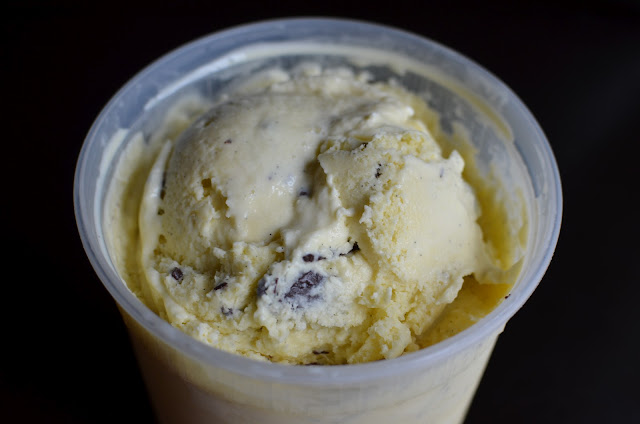 The homemade ice cream was really delicious and worth the effort.

* David Lebovitz notes the option of using half and half instead of heavy cream for a lighter alternative (though the result will be less rich and smooth).  On the flip side, you could use up to 3 more egg yolks if you're looking for a richer custard.

Make the custard:
Heat milk, salt, and sugar in a saucepan.  Scrape the seeds from the vanilla bean into the milk using a paring knife.  Add the beans and the vanilla pod to the milk.  Cover, remove from the heat, and let it infuse for about an hour.

In a separate bowl, gently whisk the egg yolks together.  Rewarm the milk, then gradually add some of the milk into the yolks, whisking constantly as you pour, to temper the egg yolks.  Scrape the warmed yolks and milk back into the saucepan to cook.

Cook over low heat, stirring constantly and scraping the sides of the pan with a rubber spatula, until the custard thickens enough to coat the spatula.  It should register 170 degrees with a thermometer.

Chill, freeze and stir:
Strain the custard into the smaller bowl containing the heavy cream.  Stir over the ice bath until cooled, then add vanilla extract.  If proceeding with an ice cream machine, chill the mixture overnight.

Making the ice cream without a machine, chill the ice cream mixture in the ice bath, then transfer it to a deep baking dish (I used a 9x13 inch baking pan).  Freeze for 45 minutes.  As it begins to freeze around the edges, remove it from the freezer and stir it vigorously (I used a sturdy spatula as well as a whisk).  Really work it to break up any frozen sections.  Return it to the freezer and check on it every 30 minutes and continue to stir and/or whisk.

Continue until the ice cream is nearly frozen.  It will take at least 2-3 hours to be ready (took me over 4 hours).

Add topping:
To add the chocolate "chips", pour melted dark chocolate over the almost frozen ice cream, stirring immediately to break up the chocolate and create small bits.  I recommend doing it in installments - pour one-third of the chocolate, stir, and repeat two more times.

Transfer the ice cream to a covered container until ready to serve.  Ice cream made this way is best enjoyed sooner rather than later.  It may not be as creamy as the variety done by machine but it is utterly delicious!