In the interest of full disclosure, I actually made these chocolate-hazelnut macarons a few months ago, before our Spring vacation in Paris and before I tackled the chocolate ones for the third time.  I just wanted to finish the saga behind the making of those chocolate macarons before talking about variations of it.  But a few months ago, after I had successfully made hazelnut macarons (which I love), I thought it'd be fun to combine the two and make chocolate-hazelnut ones. 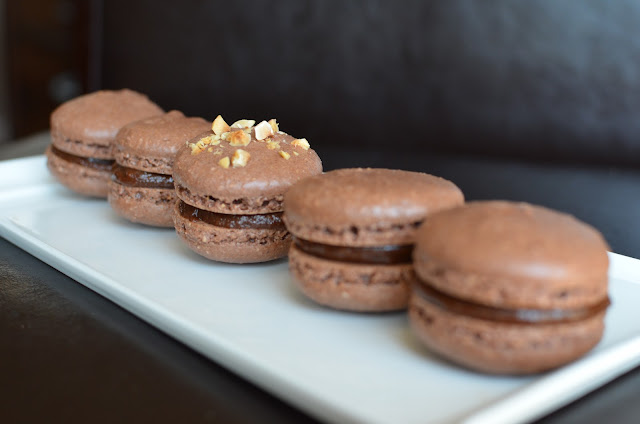 At the time, Bouchon Bakery only sold the rather large macarons, which I had no problems with.  In fact, we thought one of those was just the right portion as a satisfying snack.  The thing that struck me about their macarons was, not only were they delicious, they were so "perfect".  As in they looked perfect - perfectly smooth and uniform, each one looking like an exact replicate of the other, like compacts lined up behind the glass at a cosmetics counter.  Thinking back, it was around Christmastime when we visited (time sure flies) and they had a candy cane flavor macaron.  Of course, the little guy wanted one of those and wouldn't you know they even managed to make that tasty!  Kudos to them. 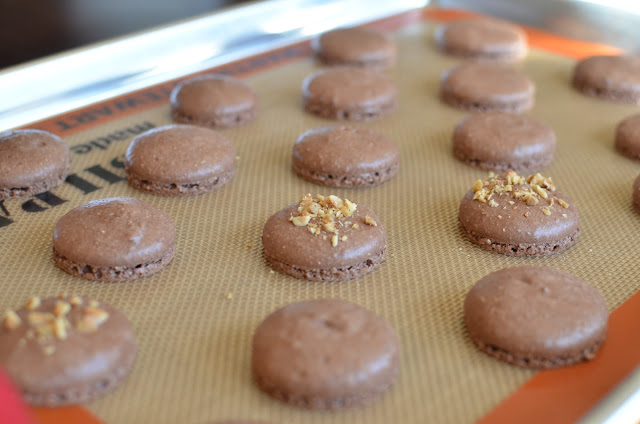 These chocolate-hazelnut macarons are literally a combination of the chocolate and  hazelnut versions - two flavors that are pretty tied as my favorite.  I use cocoa powder and a mix of hazelnuts and almonds in the batter.  For the filling, I made gianduja (chocolate-hazelnut) ganache again.  As my husband noted, the overall taste is reminiscent of a Ferrero Rocher (which I love), particularly when you eat one that has some crunchy hazelnuts sprinkled on top.  I love it! 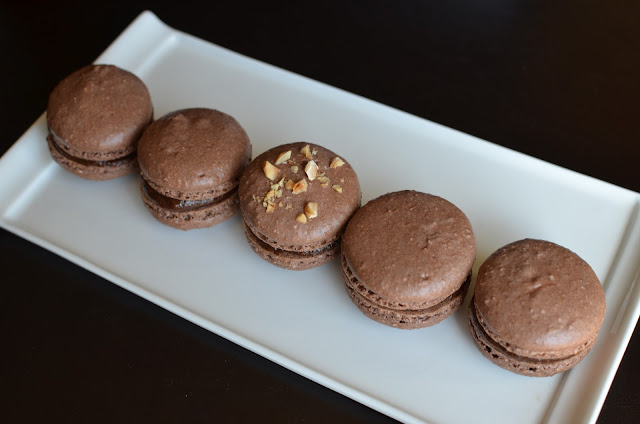 I won't repeat the entire process of making these macarons since I've covered it in detail in posts such as this one and this one.  The recipe follows.

Grind the almonds, toasted hazelnuts, confectioners' sugar, and cocoa powder together in a food processor until the nuts are finely ground and it looks like fine powder.  Pass the mixture through a medium-coarse sieve.  If there are large lumps remaining at the bottom of the sieve, place them back in the food processor and repeat.

Fill the batter into a pastry bag fitted with a plain tip that has about a 1/2 inch opening (I use Ateco #807).  Pipe 1 1/2 inch (or size you prefer) rounds onto parchment or silpat lined baking sheets at least an inch apart.  Rap the sheets 2-3 times firmly on the counter.  Let the macarons sit for about 20-30 minutes until the surface of the shells are slightly dry.

When fully cooled, spread ganache onto one macaron shell and sandwich with another.  Many people say macarons taste better with a little rest in the refrigerator.  Store them in an airtight container in the refrigerator for several days and bring them up to room temperature before eating.

- Enough to fill macaron shells in the recipe above -

Beginning at the center, slowly whisk the chocolate and cream together until combined.  Add the hazelnut paste and mix together.  Let the mixture sit at room temperature, stirring occasionally, until the ganache is fully cooled and thick enough to spread.  (You can place the ganache in the refrigerator, if necessary, to speed up the process but check on it frequently.)