Come dessert time at a restaurant, if I see a dessert with the word "dacquoise" in it, there's a good chance I'm going to order it.  If it is also accompanied by the word "chocolate", then I am definitely going to order it.  Before I even knew what dacquoise meant, I realized that there's some element of crunch and nuts involved.  If we want to get specific, daquoise actually refers to a nut meringue (almond or hazelnut typically but could be other nuts as well) or it could be used to describe a dessert that has a component of nut meringue within. 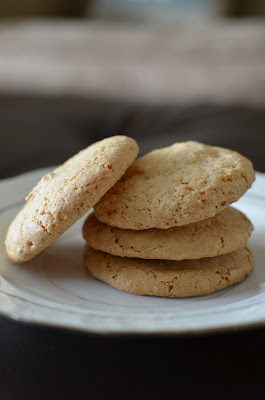 My husband and I have a favorite Italian restaurant near our house that serves a hazelnut dacquoise dessert that I order every time we go (he has the tiramisu).  There's a separate chocolate section on the dessert menu  so you know this is the place for me.  And this particular dessert (I'm salivating as I think about it) is based on both hazelnut dacquoise and a praline croustillant (another nutty/crunchy creation) with what I think is chocolate mouse on top, which is then covered entirely by a thin coating of chocolate ganache.  There's some pistachio sauce drizzled around the plate and a sprinkling of raspberries, which admittedly, I skip.  This dessert is so good!

From what I can tell, a dacquoise (this nut meringue) is usually a layer within the components of a dessert - say, a cake.  Typically, it'll be layered between buttercream and/or ganache.  And I think it's that combination of crunch against creaminess that makes it work so well (the buttercream or ganache would keep it from getting to hard).  Here, instead of making large dacquoise layers for a cake, I pretty much made cookies.  Specifically, I wanted to serve them with ice cream - the homemade vanilla chocolate chip ice cream I made. 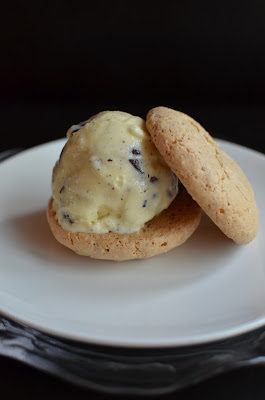 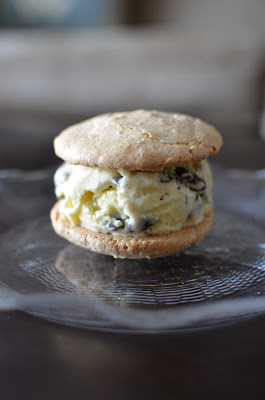 I couldn't decide between making hazelnut or almond dacquoise so I combined the two.  I played around quite a bit with a recipe for walnut dacquoise that I found from Martha Stewart.  I think it worked out well.  The dacquoise is not too hard or crispy and I particularly like the chewiness in the center.  Lightly toasting the nuts also brings out their flavor.  I'm not a huge fan of meringues but adding the nuts adds a huge amount of flavor (and some healthy fat that I embrace).

The process of making dacquoise is actually pretty similar to macarons except it's not quite as precise and involved.  To simplify, it's basically a matter of incorporating ground nuts into firmly whipped egg whites.

I used a mixture of almonds and hazelnuts (2 ounces each - maybe I tipped things a bit more in favor of the almonds) for this.  You could use another kind of nut as well - in fact, the original recipe is for walnut dacquoise.  I lightly toasted the nuts in a 350 degree oven and once cooled, processed them in the food processor with 3/4 cups of confectioners' sugar and a pinch of salt.  The original recipe used more sugar but didn't use any to whip the whites.  I decided to divide the sugar up and use some with the egg whites because in my experience, that stabilizes the whites and makes it easier to whip to stiff peaks without breaking them. 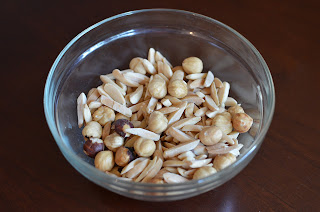 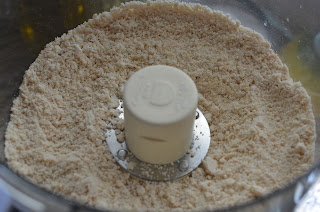 Now, start whipping 2 egg whites (make sure it's at room temperature so you get maximum volume).  Once it reaches soft peaks, gradually add in 3 tablespoons of granulated sugar.  Whip until stiff peaks.  When it is near that point, I added a bit of almond extract.  Then, fold the ground nut mixture into the whites in 2 batches. 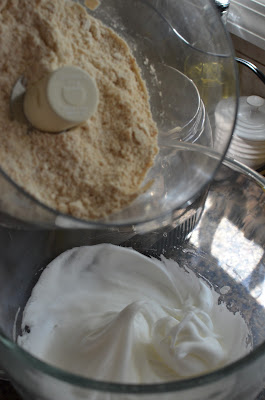 Gently fold together until combined.  I love my sturdy spatula I bought from Le Cordon Bleu; it's great for folding and since it doesn't have a removable tip, clean up is very easy. 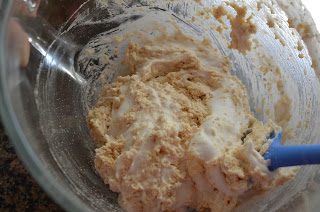 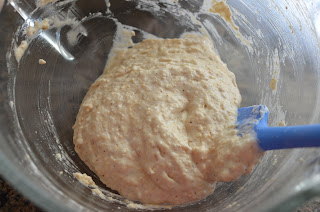 Transfer to a pastry bag, fitted with a 1/2 inch round pastry tip.  Pipe out 2 1/2 inch rounds on parchment or silpat-lined baking sheets.  I got 14 rounds from this recipe (the original recipe I modeled this after made twice as much but was supposed to yield 16, which is quite a discrepancy). 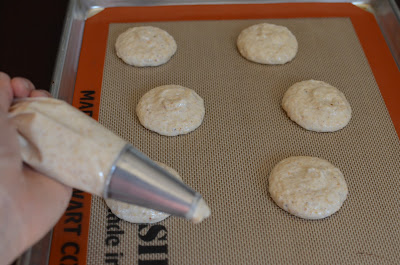 Place them in a preheated 375 degree oven to bake for about 14 to 16 minutes about an inch apart since they do spread a little while baking, rotating the sheets halfway through.  I couldn't get them as dark as the recipe suggests it should be; mine are lightly golden brown instead of deep gold.  The texture, freshly baked, is slightly crisp along the edges but chewy in the center.  That's the way I like them; I don't enjoy teeth-shatteringly hard meringues. 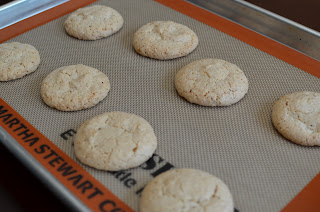 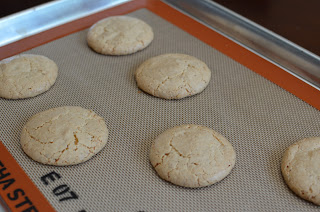 Let the dacquoises cool completely on the baking sheet and they should slip right off the sheets.  You can keep them stored in an airtight container for up to 2 days but be warned that they harden up as they sit.  If you're eating them plain a couple of days later, try popping them in the microwave for 10 seconds - they'll be soft and chewy again. 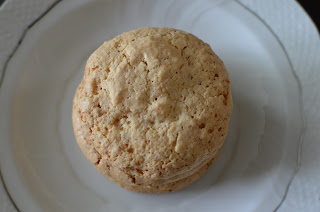 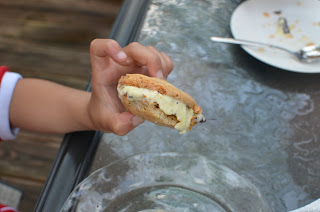 I think these are great to eat with ice cream.  You could play on the flavor of ice cream you use with the nut in the dacquoise (i.e., making an almond dacquoise - add some chopped toasted almonds into vanilla ice cream).  The soft ice cream is a nice contrast against the crisp-chewiness of the dacquoise.


* You can use all almonds or hazelnuts, or substitute another like walnuts.  It should total about 1 1/4 cups.

Preheat oven to 375 degrees, with racks in the top and lower thirds of the oven.  Line 2 baking sheets with parchment paper or silicon baking mats.

In a food processor, grind the cooled almonds and hazelnuts together with the confectioners' sugar and salt until fine.

In a mixer fitted with the whisk attachment, whip the egg whites.  Once it reaches soft peaks, gradually add the granulated sugar.  Continue until stiff peaks just form.  Whip in the almond extact for a few seconds.

Fold the nut mixture into the whipped whites in 2 additions.  Transfer the mixture to a pastry bag fitted with a plain 1/2 inch pastry tip.  Pipe 2 1/2 inch rounds onto the lined baking sheets, spacing them about an inch apart.

Bake for approximately 14-16 minutes, rotating the pans midway through.  Let cool completely on the sheets on a wire rack before removing.

You could serve the dacquoises with ice cream.  Store the dacquoises in an airtight container for up to 2 days.  If eating them plain a day or two after baking, try microwaving them for 10 seconds to soften them up.