Popovers - they're one of those things I love to see and eat occasionally at a restaurant when I can find it.  There's a real "wow" factor with the very way they look, all puffed up yet hallow in the center when you cut it open.  Plus, they taste great - crisp and light but just a little bit custardy or eggy at the top.  I think they're an impressive alternative to bread or a biscuit to accompany your meal.  They look like they would be tricky to make but turns out, it's really easy! 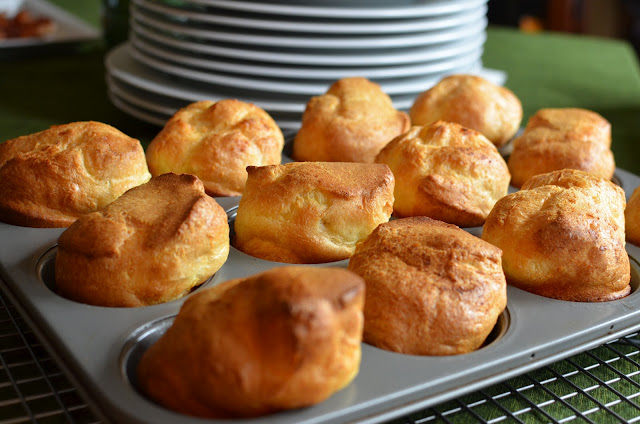 Once in a while, my sister and I meet up for a little shopping and lunch on the weekends.  One particular department store we sometimes eat at serves up a fresh popover with strawberry butter that we look forward to.  Maybe that's why I associate popovers with something ladies have at brunch but I think their taste is popular with both male and female alike.


So my interest really peaked when I saw a tutorial on making popovers at thekitchn.com, my favorite food related site.  Turns out, making popovers only requires 4 basic ingredients, along with a pinch of salt.  You can mix the batter together in a blender, or food processor like I used for the dutch baby pancake.  But better yet, just grab a whisk and a large bowl and whip the batter up by hand; that's what I did and it worked beautifully. 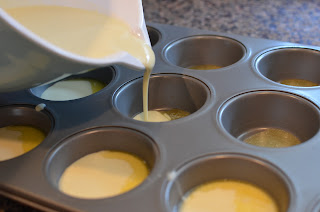 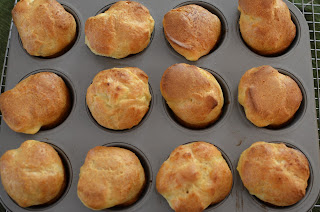 And I almost forgot to mention you simply use your muffin/cupcake tin.  An authentic popover pan would certainly be nice and give you a taller product but if you're like me, you don't want to waste money on extra kitchen equipment that you only plan to use occasionally. 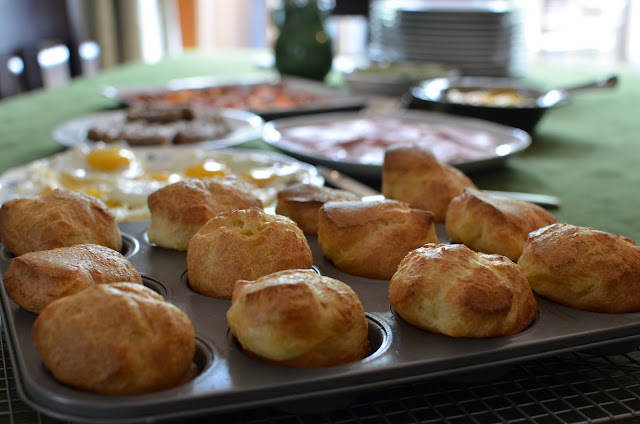 I invited my family over for breakfast over Memorial Day weekend and instead of pancakes, I made popovers with some eggs and breakfast meats.  I was so happy to see the dozen popovers disappear quickly.  It's great to have a group to share your food with and such a nice feeling when they clean their plates (as in eat the food on them, not wash them, although that'd be a nice gesture too). 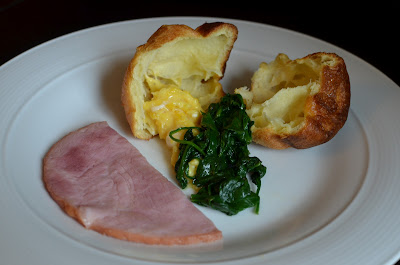 Much like bread, you could get creative with how you eat your popovers.  Butter or jam are popular options, or you could consider filling them with some eggs and meat or cheese for a more savory twist.  They're certainly good enough plain fresh out of the oven.

This recipe makes 12 popovers in a standard muffin tin or 6 popovers in a popover pan.  I thought about whipping the batter up in my food processor but decided to try it manually with a large bowl and whisk.  I was a little nervous about this but with company coming over, it's nice not to have more equipment lying around needing to be cleaned up.

To begin, grab a large bowl deep enough to allow you to whisk the loose batter without making a huge mess.  Add a cup of milk (I went with 2%), 2 eggs, and one tablespoon of melted butter to it. Whisk together until fully incorporated. 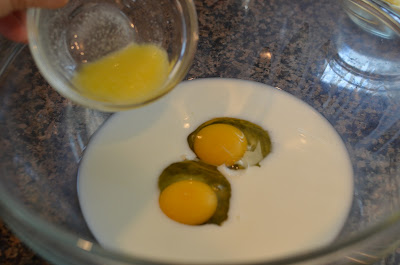 Then add a cup of flour and 1/4 teaspoon of salt. 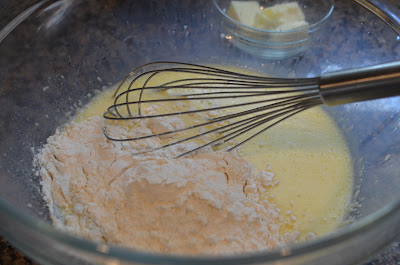 Whisk thoroughly until there are no lumps and the batter is frothy and bubbly. 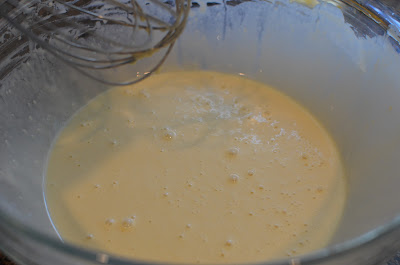 The batter is done at this point but needs to rest for a bit to allow the flour to absorb the liquid.  While it's resting, heat the oven to a hot 450 degrees.

Place your muffin tin in the 450 degree oven for 2 minutes to warm up.  Using oven mitts, carefully remove the pan from the oven and divide 2 tablespoons of melted butter among the 12 cups.  Give the batter one more whisk to froth it up again, then pour the batter into the cups about halfway up.  Bake for 15 minutes - without opening the oven door or the popovers will deflate!  (It's fun to watch them puff up in the oven though - just look using the oven light.)  Then, still without opening the oven, turn the temperature down to 350 degrees to bake another 15 minutes. 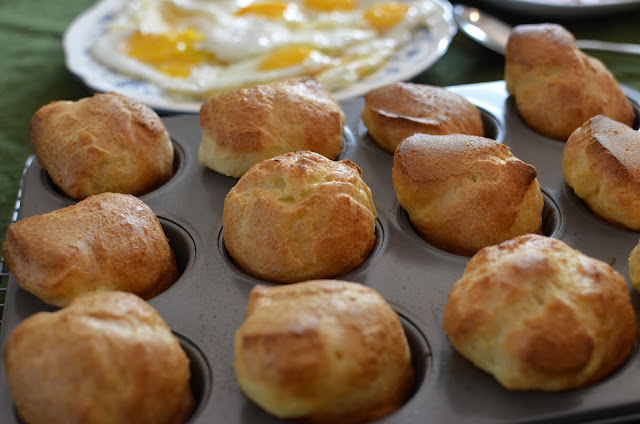 After the 30 minutes of total baking time, you can open the oven and check on them.  When done, the popovers are golden brown, dry to the touch, and sound hallow when tapped.  Remove them the oven, tap them out onto a cooling rack and pierce the bottoms of each with a knife to allow steam to escape so the popovers remain crisp and puffed.

Cool enough to handle and eat immediately.  If you're guests are not gathered around the table yet and have a little bit of time, say 20 minutes or so, before eating, I think these can be stored in the still warm (but off) oven.  If necessary, they can also be warmed in a 350 degree oven for about 5 minutes if making in advance.

Place milk, eggs, and 1 tablespoon of melted butter into a large mixing bowl.  Whisk until fully combined.  Add flour and salt, whisking together until there are no lumps and batter is frothy and bubbly.  Alternatively, you could do this in a food processor or blender.

Heat the oven to 450 degrees.  Let the popover batter rest while the oven is heating so the flour has a chance to absorb the liquids.

Put the muffin tin into the hot oven for 2 minutes to warm .  Carefully remove the tin from the oven and divide the remaining 2 tablespoons of melted butter between the cups.  Give the batter a final whisk to froth it up again and fill each of the cups up about halfway.

Bake in the oven for 15 minutes.  Do not oven the oven during baking or the popovers will deflate.  Then reduce the heat to 350 degrees (still without opening the oven) and bake for another 15 minutes.

Now you can open the oven door and check on the popovers.  They are done when golden brown, feel dry to the touch, and sound hallow when tapped.  Turn finished popovers onto a wire rack.  Pierce the bottoms of each with a knife to allow steam to escape.  Cool just enough to handle and serve immediately.

If necessary, popovers can be re-warmed in a 350 degrees for about 5 minutes.