Choux pastry is so versatile.  I basically want to tick off all the ways you can spin that light pastry dough into something delicious.  And everyone does seem to love all versions of things made with it.  You can fill them for cream puffs and profiteroles, make eclairs, or take a savory route by incorporating cheese into the pastry to make gougeres.  In this case, you can also simply top the dough with coarse pearl sugar to make chouquettes. 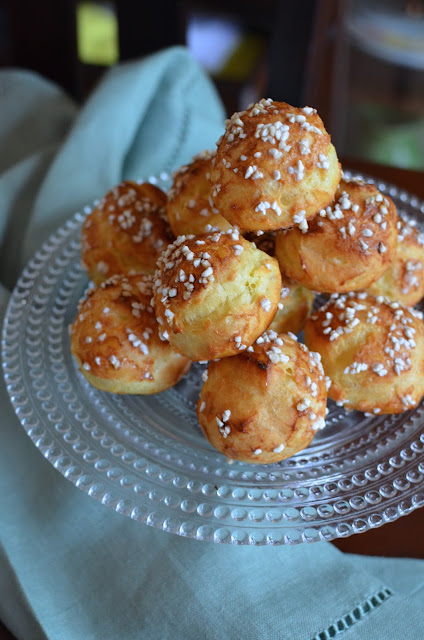 Chouquettes are cream puffs that are often eaten as a snack in France, packaged by the handful or so in paper sacks.  Funny enough, that makes me think of my own history with Chinese egg waffles.  While quite different in taste, they are likewise sold in paper sacks and eaten as a snack.  They're harder to get your hands on now but I've had more than my fair share of them in the past.

But back to chouquettes.  They are simply mounds of choux pastry topped with a coarse pearl sugar and baked until puffed and golden.  The chouquettes are super light and airy, with a lovely eggy taste.  It's crisp at first bite but soft and tender on the inside.  Even with the signature pearl sugar adornment on top (looking remarkably like salt on a New York style pretzel), chouquettes are ever so mildly sweet. 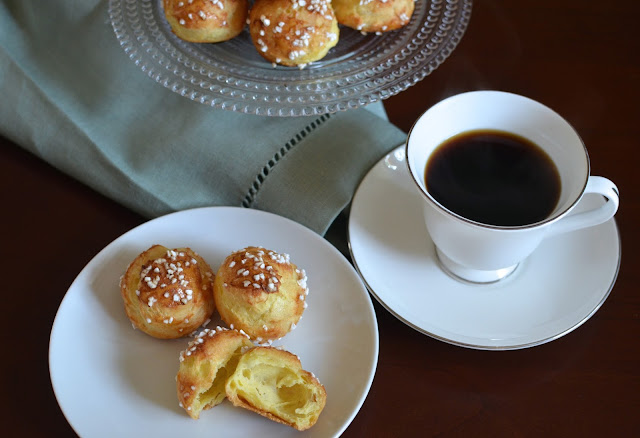 With their lightness and airiness, these little puffs almost disappear in your mouth. Traditionally, I think you would see these in a smaller size than my version here, as little bites that you can practically pop whole in your mouth.

They are no sweat to make (now that I'm armed with a couple of tips on how to properly cook the dough) and a fun thing to serve - possibly because they look a lot trickier to make than they really are. 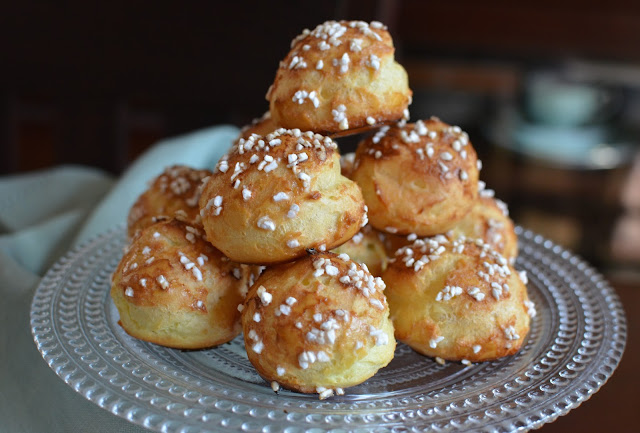 These certainly do make a wonderful afternoon snack but I made this batch last Sunday to serve with breakfast.  My sister, brother-in-law, and niece slept over the previous night to stay with the little guy while my husband and I attended a wedding. The following morning, I whipped this up and we sat down to a little savory and sweet breakfast spread.  We had bacon, eggs, and sausage on the savory side and a pile of these light chouquettes as a sweet offering. 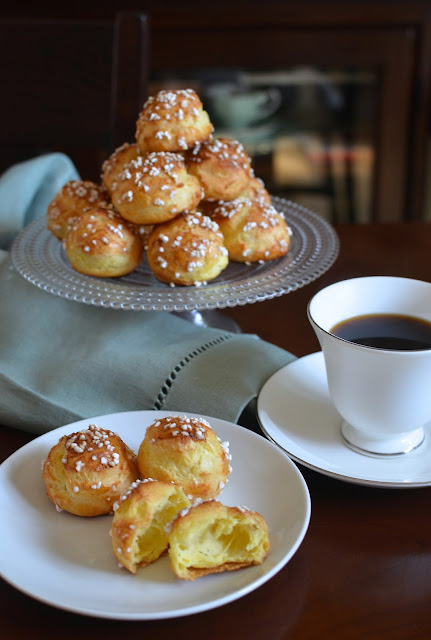 They went down a treat though I have to say it's always nice to sit down with family for a good weekend breakfast no matter what you're eating!


Sticking with the familiar, I used David Lebovitz's chouquette recipe.  You might remember I had a mishap with watery dough the last time I made eclairs with this very similar recipe so I've taken what I've learned and applied it here.  In essence, you need to cook the dough an extra minute or two on the stove, over heat, to dry it out.  I had no problems at all.

I piped the mounds out and topped them with an egg wash and then the coarse sugar.  You can make them smaller for truly bite-size snacks if you like. 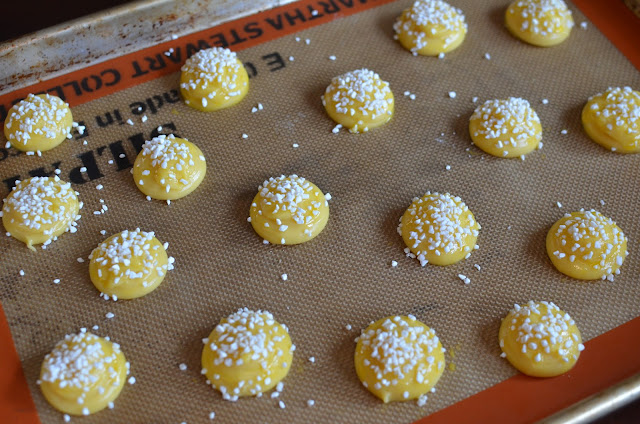 I mentioned in the past that I picked up some invaluable choux pastry cooking tips/instructions from Dorie Greenspan in her latest book; she also has a chouquette recipe there.  Her recipe calls for an extra egg to make for a more custardy center and she uses some milk (instead of just water) in her pastry.  It should make for a slightly richer, more tender chouquette if that sounds more appealing to anyone.

One thing that kept me from making chouquettes was getting my hands on the coarse sugar! 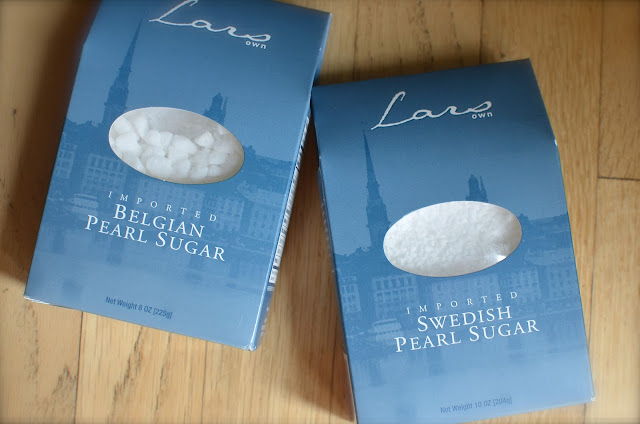 What you want is the Swedish pearl sugar, pictured on the right in the photo above.  I ordered it online but I hear Ikea carries it!  I wanted to mention that you don't want Belgian pearl sugar (how confusing...), which is far bigger and used for liege waffles. Admittedly, I don't even have a waffle maker but I like to plan far in advance so when I saw the Belgian pearl sugar at Sur La Table recently, I decided to buy it! 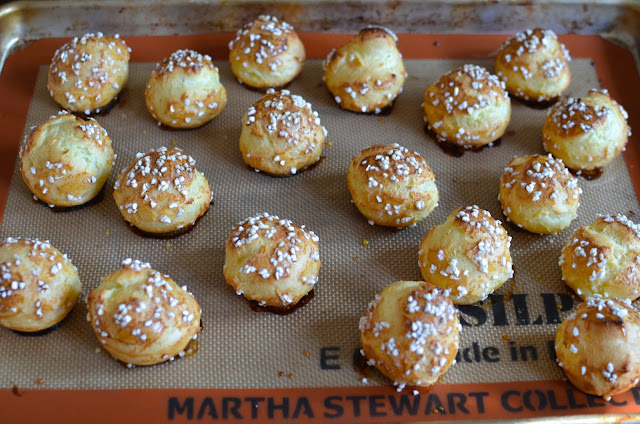 The puffs take about 25 minutes in the oven and then they're ready to be served. Ideally, you want to enjoy these soon after they come out of the oven.  I can attest that they go really well with a cup of coffee, as part of breakfast or as a midday snack.  They are infinitely snack-able! 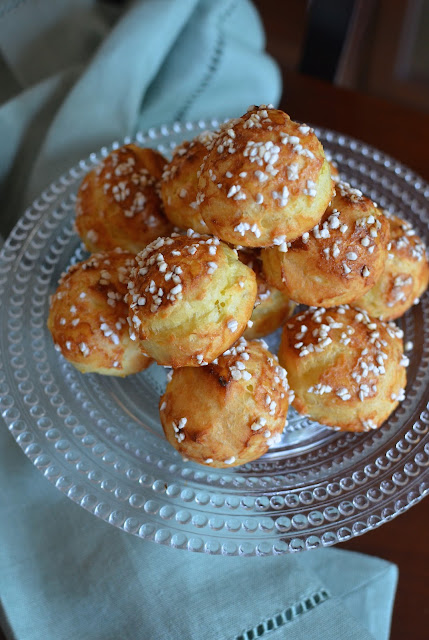 They also go nicely alongside your meal.  After all, they are very much like popovers. 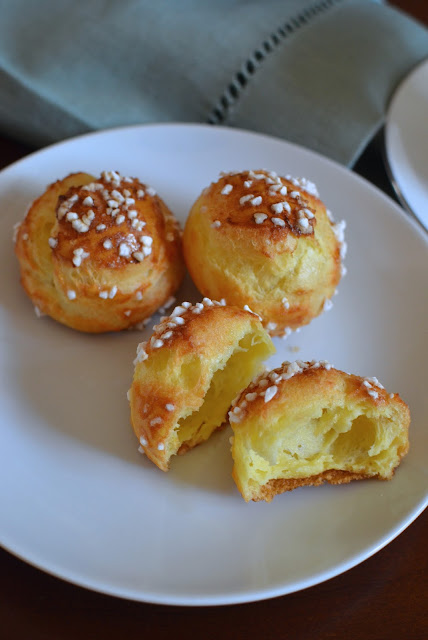 Preheat oven to 425 degrees.  Line a baking sheet with parchment paper or a silicon baking mat.

Place water, salt, sugar and butter into a saucepan.  Bring to a rapid boil over high heat.  Immediately add the flour all at once, lower the heat to medium-low and quickly start stirring the mixture together energetically with a wooden spoon.  The dough will come together and a light film will form at the bottom of the pan.  Keep stirring vigorously for another minute or two.  [This step of cooking the dough is very important; it dries out the dough so that it will not be too watery.]

Transfer the mixture to a piping bag fitted with a plain 1/2 inch round tip, or simply cut an opening in the bag.  Pipe dough into small mounds, whatever size you like though small is traditional, evenly spaced apart.

Lightly beat the egg and milk together to make an egg wash.  Gently brush the top of each with some of the egg wash.  Use the brush (or wet fingers) to smooth down any pointy ends.  Top each with coarse sugar, pressing a generous amount onto the top and sides of each.

Bake until puffed and well-browned, about 25-30 minutes.  If puffs get too dark midway through baking, turn oven temperature down to 375 degrees and continue baking.  Remove baking sheet from the oven and let cool on a cooling rack.  If you want them crisper, you can poke the side with a sharp knife or skewer after you take them out of the oven to let some of the steam escape.

These are best eaten fresh or the day they're baked.  Once baked and cooled, you can freeze them for up to a month in a freezer bag.  Defrost at room temperature and warm them briefly in a moderate oven, until crisp.