I made chocolate eclairs!  I've been wanting to make eclairs for a long time and these were one of my baking projects during the holiday break.  It was an interesting experience and I was happy that they ultimately turned out (quite deliciously, but it took two attempts) and we were able to enjoy them with my sister and her family during a relaxing little after-Christmas dinner at our place.
Here's the story: Over a year ago, I made pate a choux and used it to make cream puffs and profiteroles.  They turned out nicely and I was pretty proud of myself.  I wanted to make eclairs next; after all, it's the same dough and all I'd have to do is make pastry cream and either a ganache or chocolate glaze for the topping - things I've done before.  But there was something about the idea of making eclairs (and even making cream puffs and profiteroles again) that seemed daunting and I put it off, and off.  I was reluctant for some reason...and I may now know why. 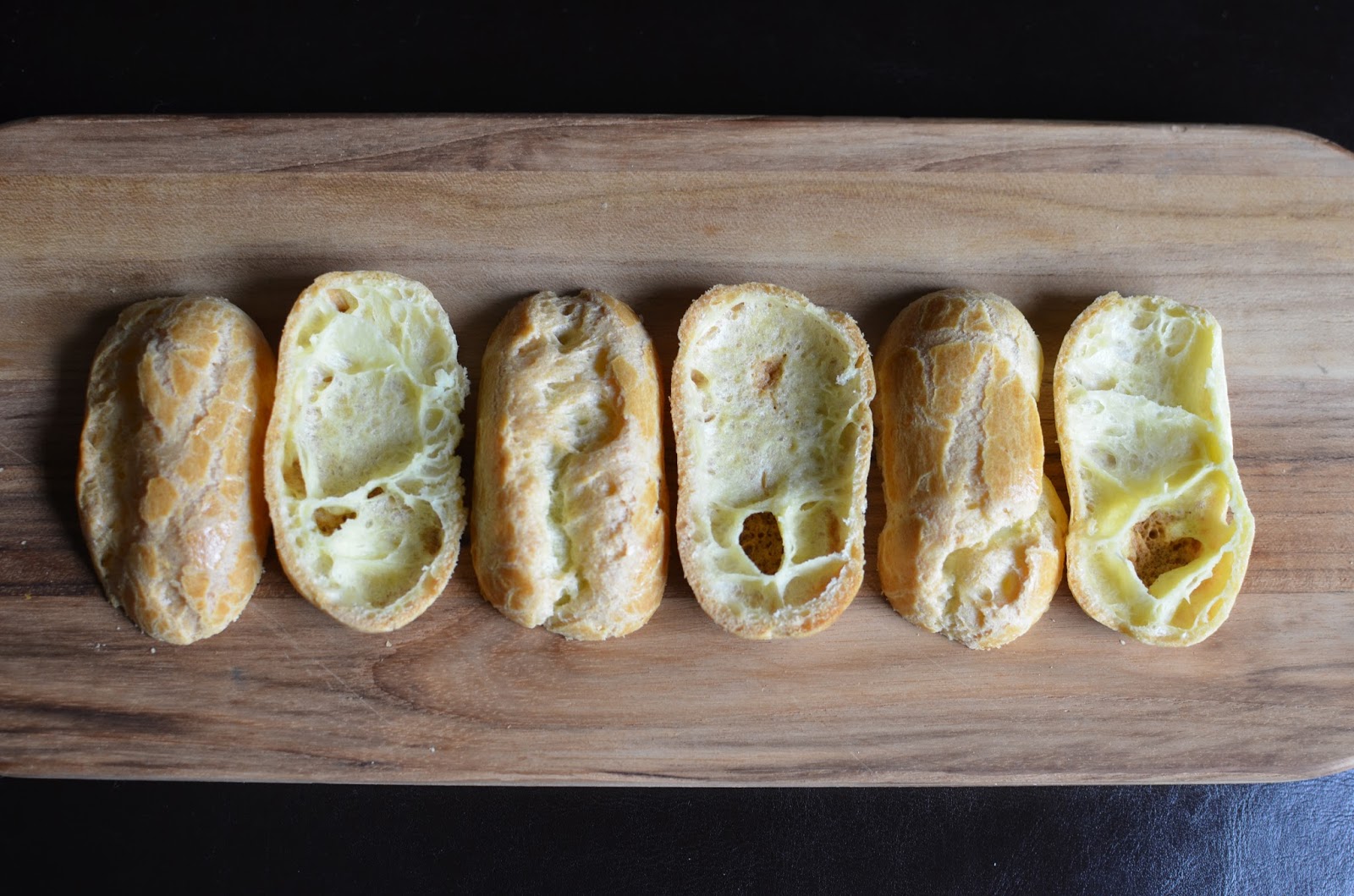 Maybe we sometimes have a gut feeling about these things.  I was worried about something - I thought maybe it was the steps involved or about wielding that piping bag with my naturally shaky hands.  Turns out...it was the dough!  The dough that should be simplicity to make and involving just a few ingredients.

I made the pate a choux dough following the same recipe I used successfully last time and it turned out...watery!  I just stared at it, a little shocked because this kind of fail doesn't happen very often.  That's not because I'm "good" but because I'm a bit of a control-freak; I know what I like, and I research and pick reliable recipe sources. 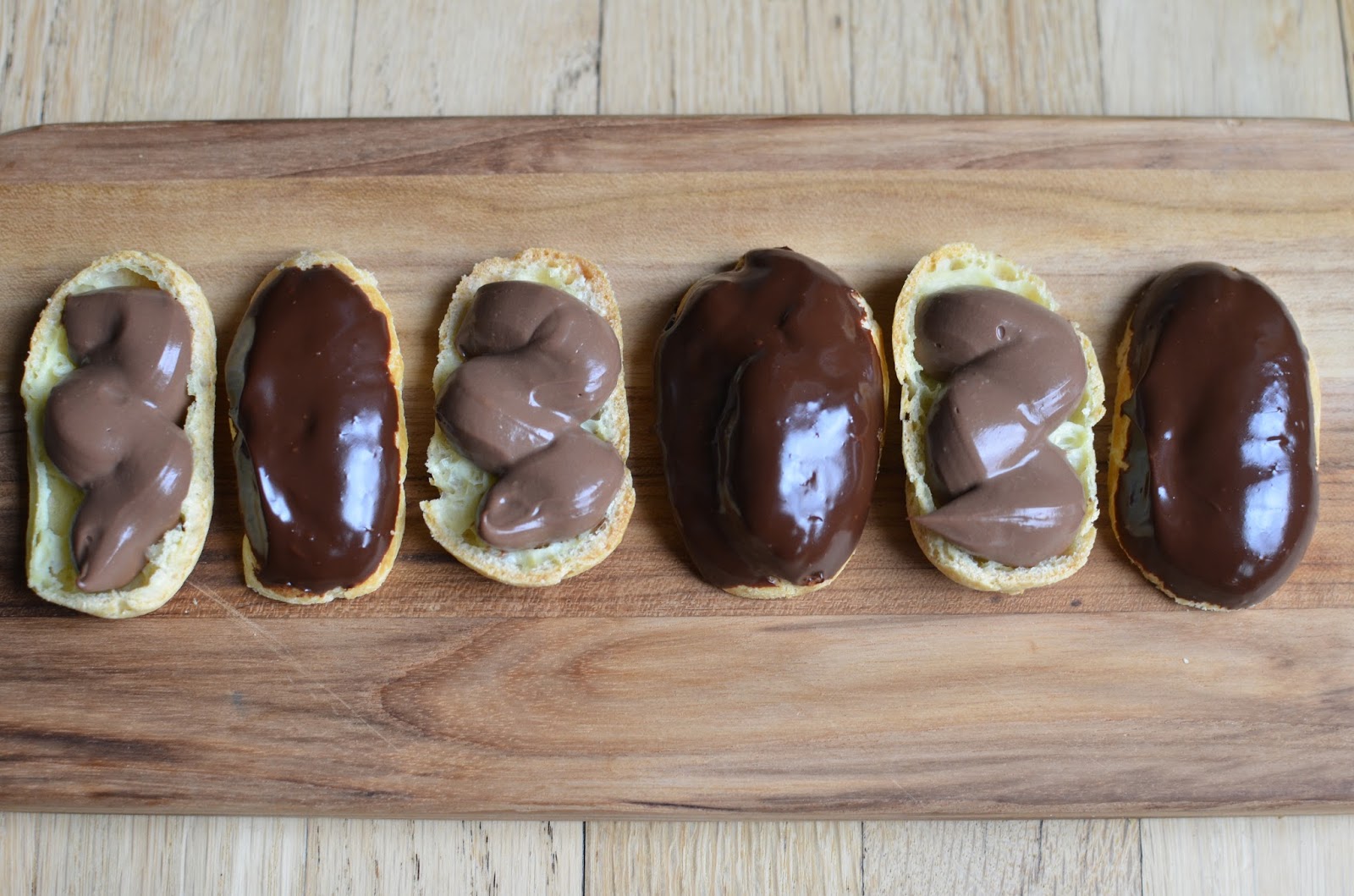 Well, there was absolutely no way I could pipe the dough that sat in front of me; it was almost as thin as the consistency of soup and ran right through the pastry tip. What did I do?  I tried to fix it by placing it in the fridge and giving it some serious whipping with my wooden spoon every so often to see if it would stiffen up. 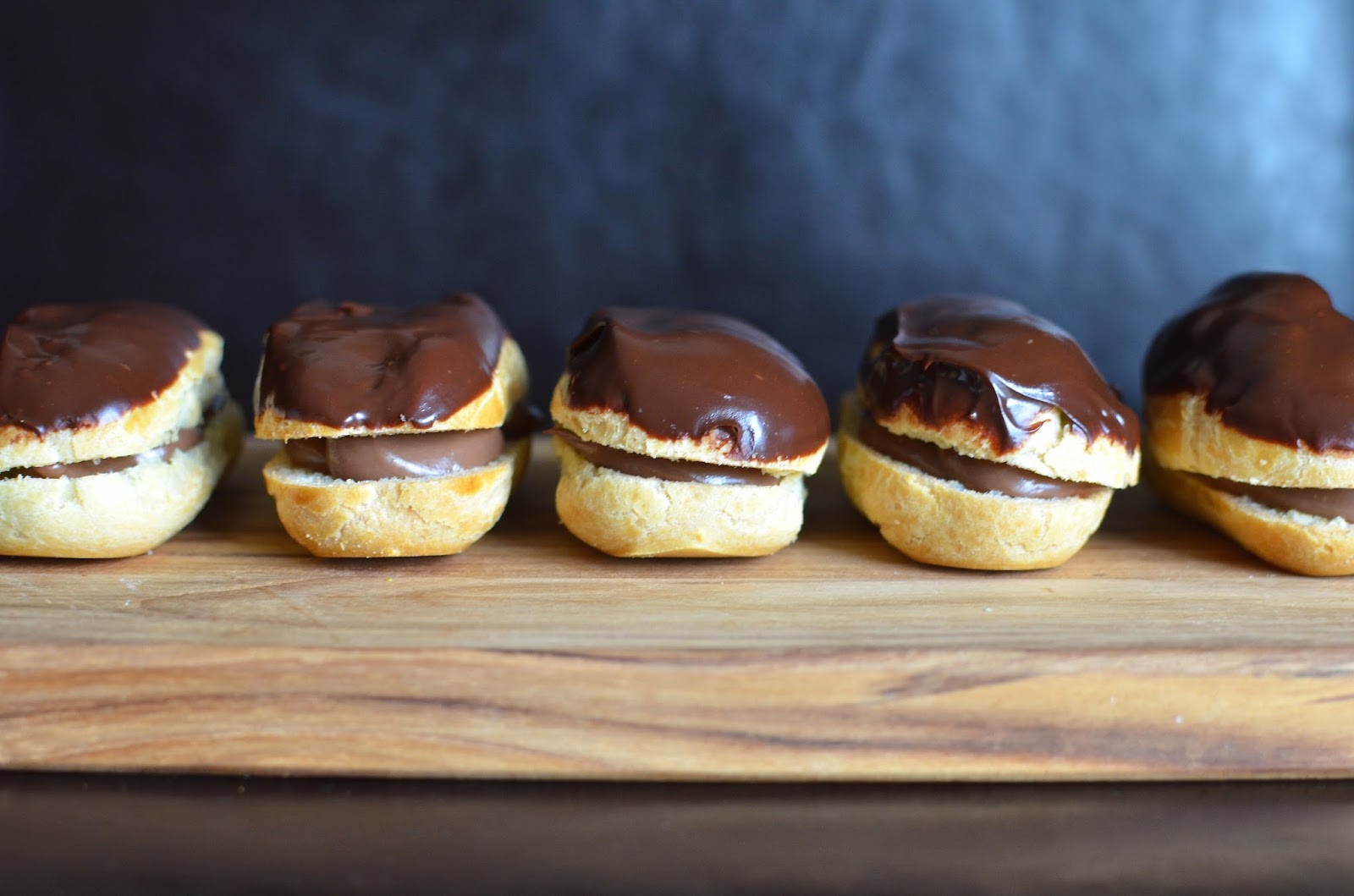 I then remembered that the last time I made the dough for those cream puffs, I'd noted that the dough was thinner than I expected!  Looks like I was lucky last time! So while I was awaiting the fate of that watery dough, I started thinking maybe I should use less eggs.  But then I looked around some more...and consulted Dorie's latest cookbook (Jo's chouquettes recipe instructions helped me, too) and realized that I needed to cook the dough longer on the stove, on the heat, to remove the liquid from the dough to dry it out!  Not doing that was what made the pate a choux runny! I love David Lebovitz, the source for the recipe I used, but the instructions did not cite that. 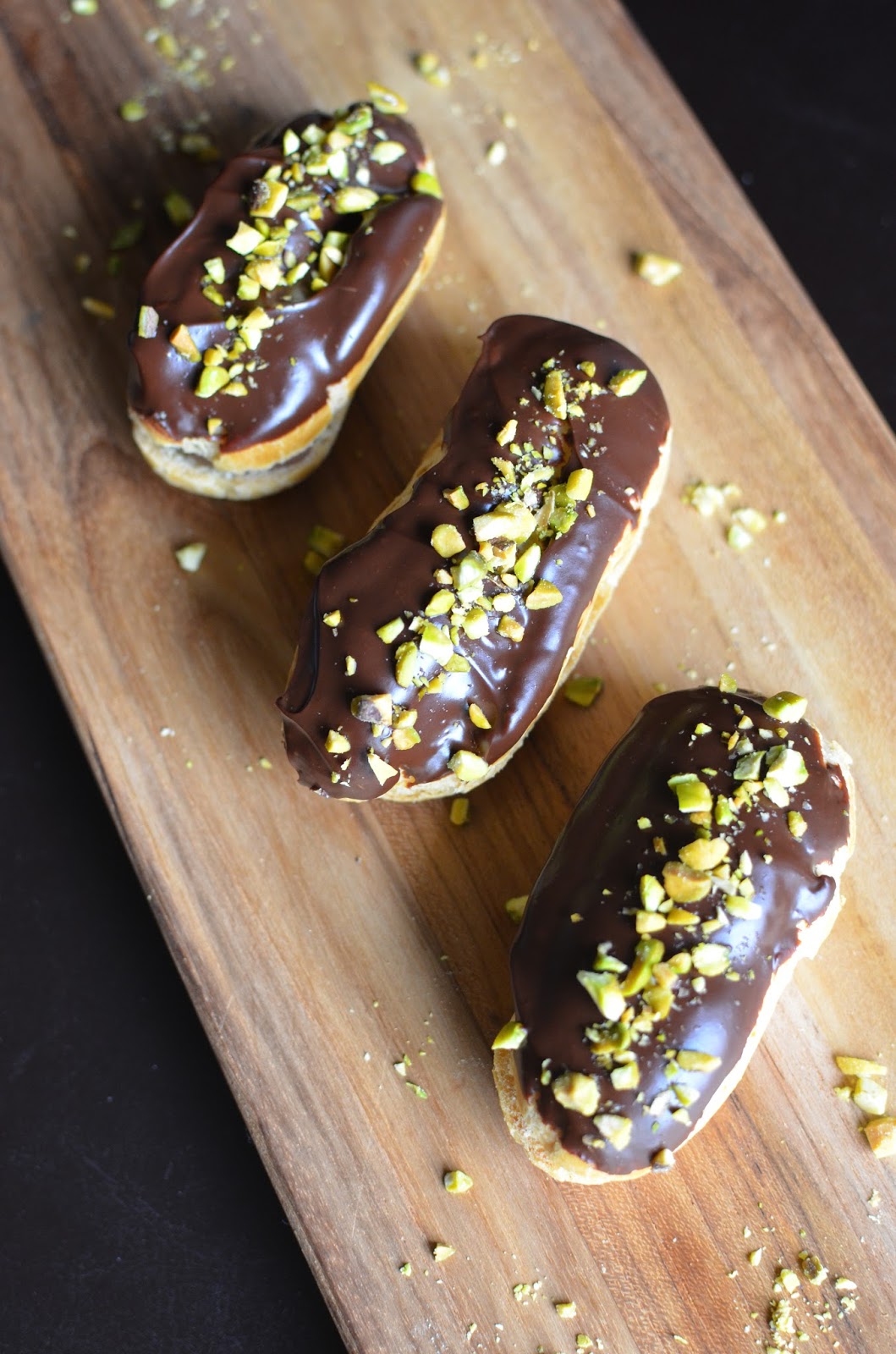 I decided to abandon that first attempt (the dough had thickened some but no where near enough and I didn't hold much hope for it) and make another batch.  By cooking the dough on the heat a couple of extra minutes, I had a wonderfully thick dough that was a world of difference from my first attempt!  It's a good thing I only sacrificed half a stick of butter and a couple of eggs for the re-do!

So that was the little drama behind my eclair-making experience.  I feel really good about it after the fact because I learned something!  I also no longer feel a weird reluctance at the thought of making eclairs or pate a choux!
After all that back story, we can finally talk about these actual eclairs!  They were worth the drama because these little eclairs were not only fun to look at but also so easy - and delicious - to eat!

As you've clearly seen from all the pictures I threw in as backdrop to my story, I was true to form and went with a chocolate pastry cream for my eclairs.  While a vanilla pastry cream would be very good (I might try that), I can never get enough chocolate and that's just a plain fact for me. 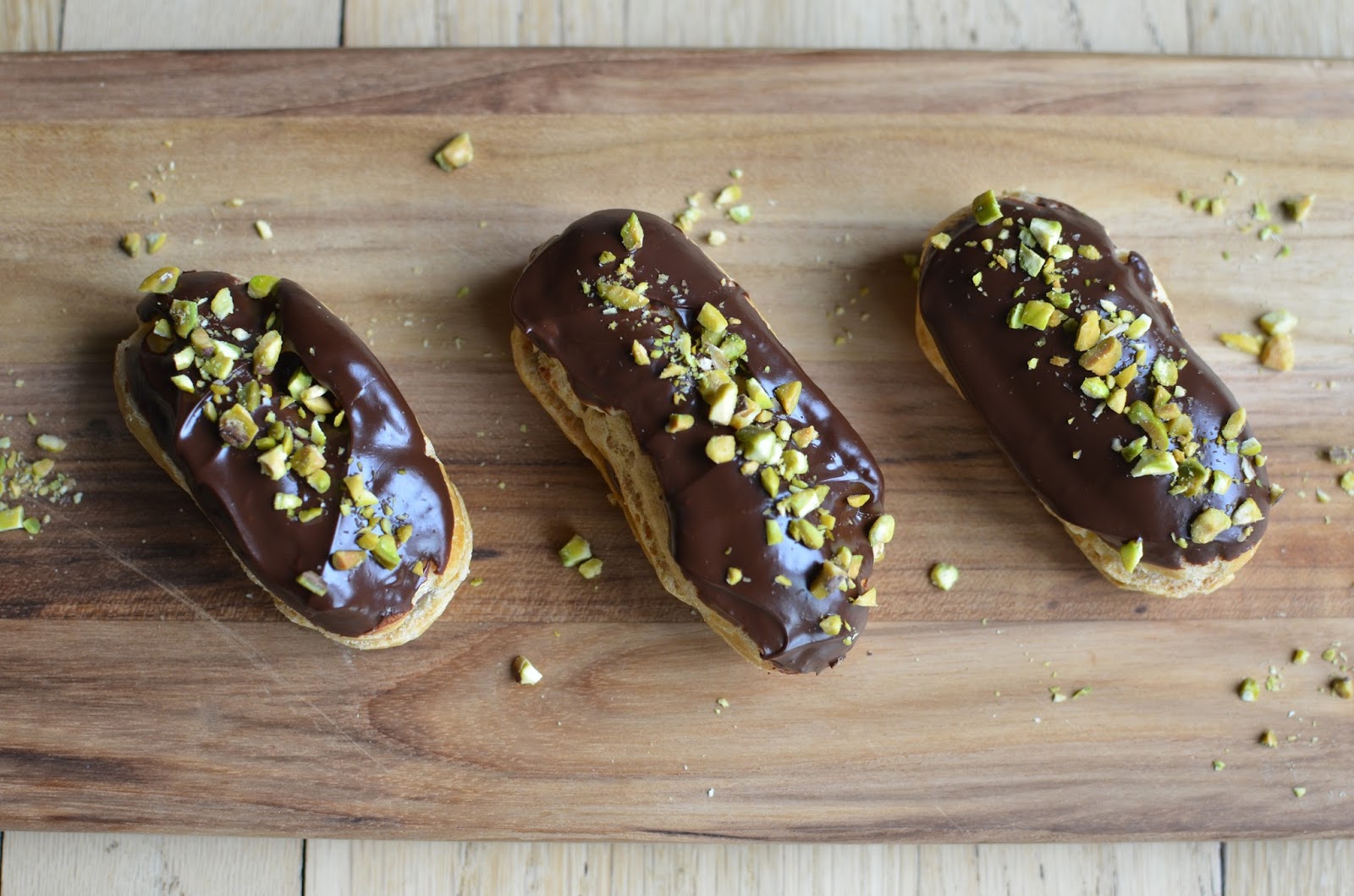 Topped with chocolate ganache, I decided to sprinkle some of the eclairs with pistachios after Nigella reminded me that any cake becomes instantly more beautiful garnished with it.  I think she's right and the same goes for eclairs.  Interestingly enough, I think the eclairs tasted all the better with that bit of crunch and flavor!

My little batch of chocolate eclairs disappeared quickly at the dinner table that night I served them...and there is no better feeling!


After all that talk about the dough, here's how the second, successful, pate a choux turned out . It's thick and a little resistant but not overly stiff.  This is a world different from my first runny batter (it couldn't be called "dough"). 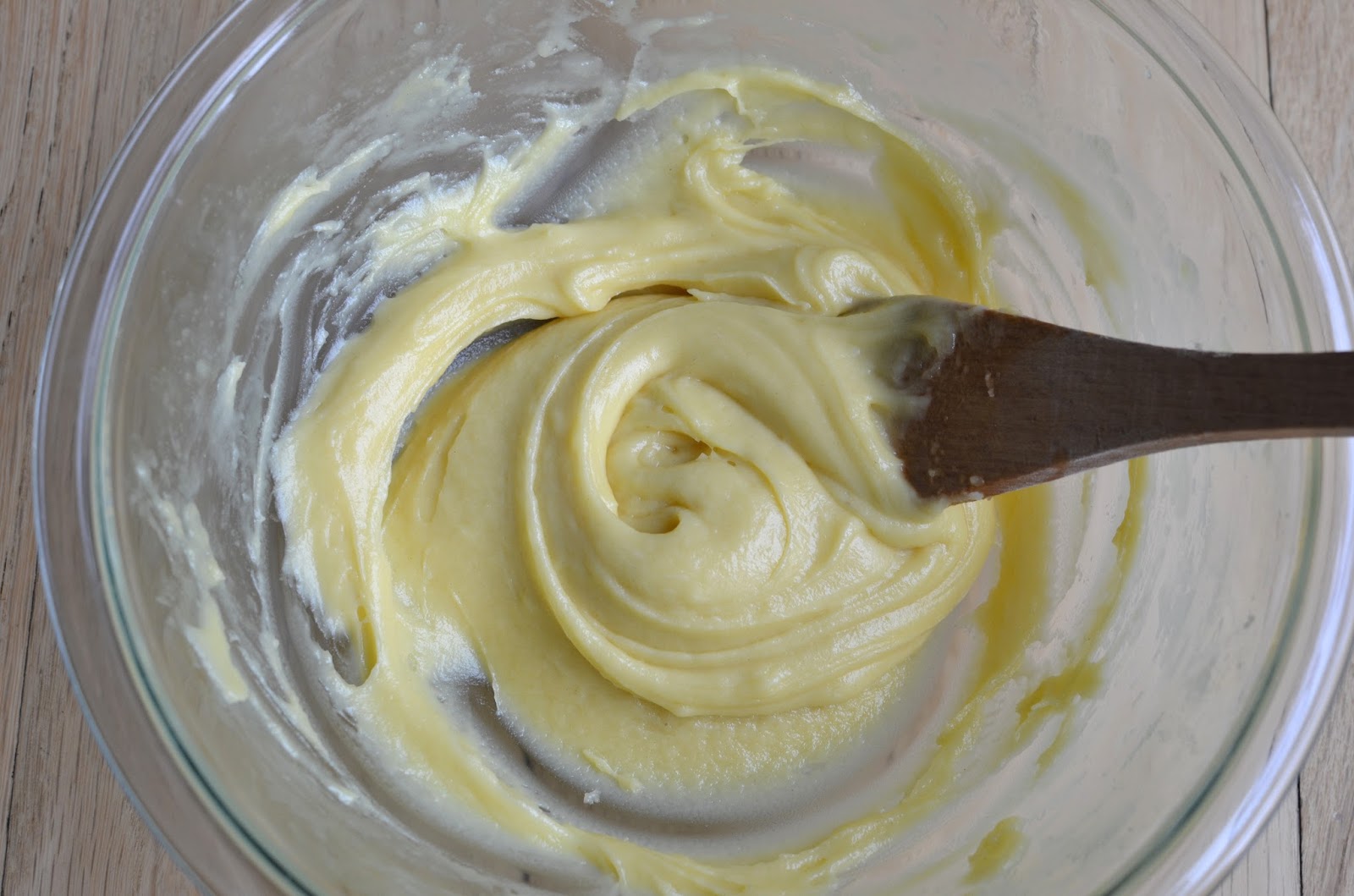 Piping makes me nervous, partly because my hands are shaky and I tend to make things uneven and too large!  Well, I managed decently on size - as far as keeping them about 2 1/2 to 3 inch eclairs the way I intended - but failed on consistency and neatness. 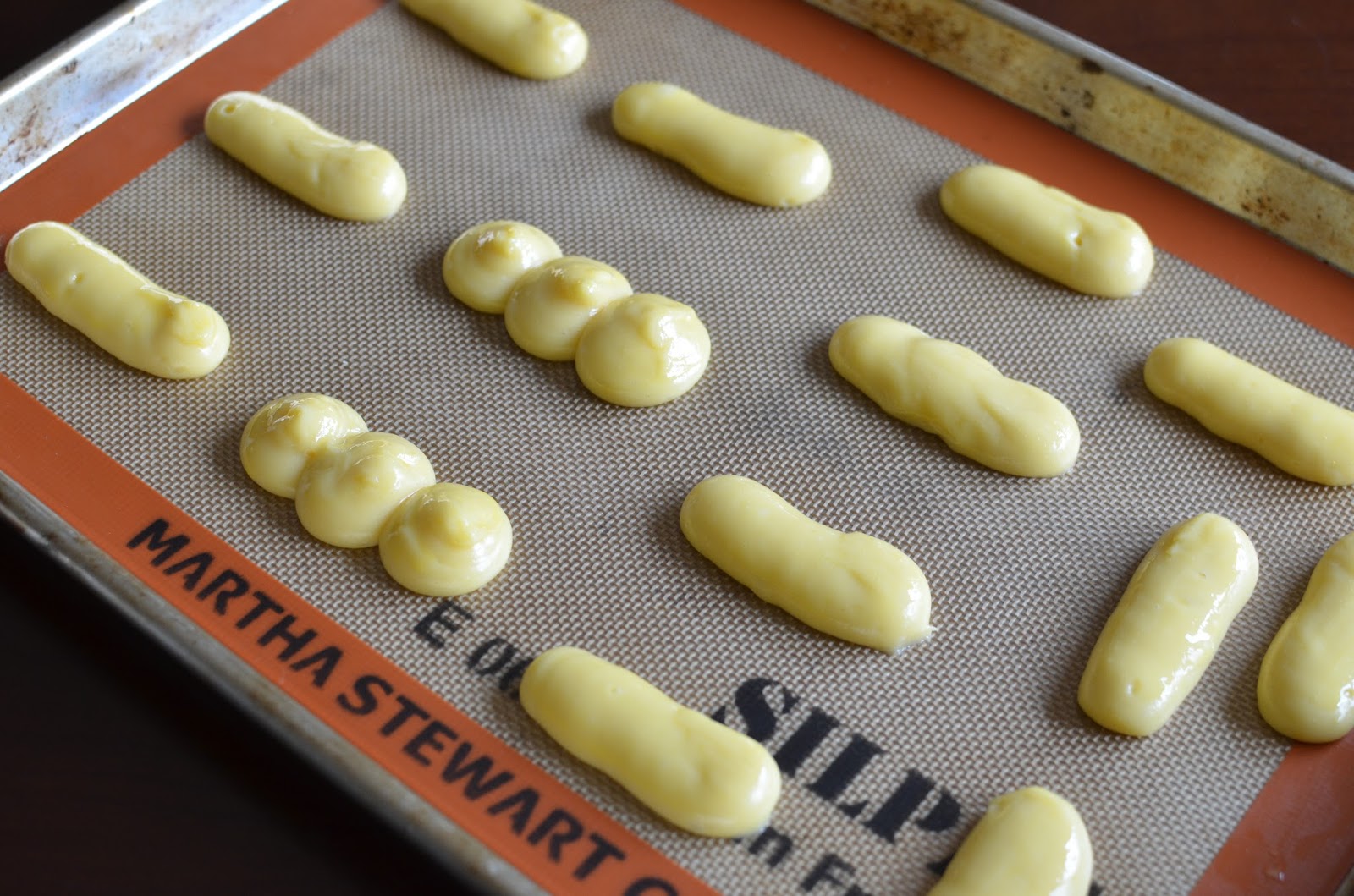 Do you see the two snowman looking ones I piped in the picture above?  That was my attempt to make "bubble eclairs" - something I saw in Dorie Greenspan's latest cookbook.  Mine did not bake up evenly enough to look the way they were supposed to so I'll spare you the trauma of looking at it!  It was worth a try though. 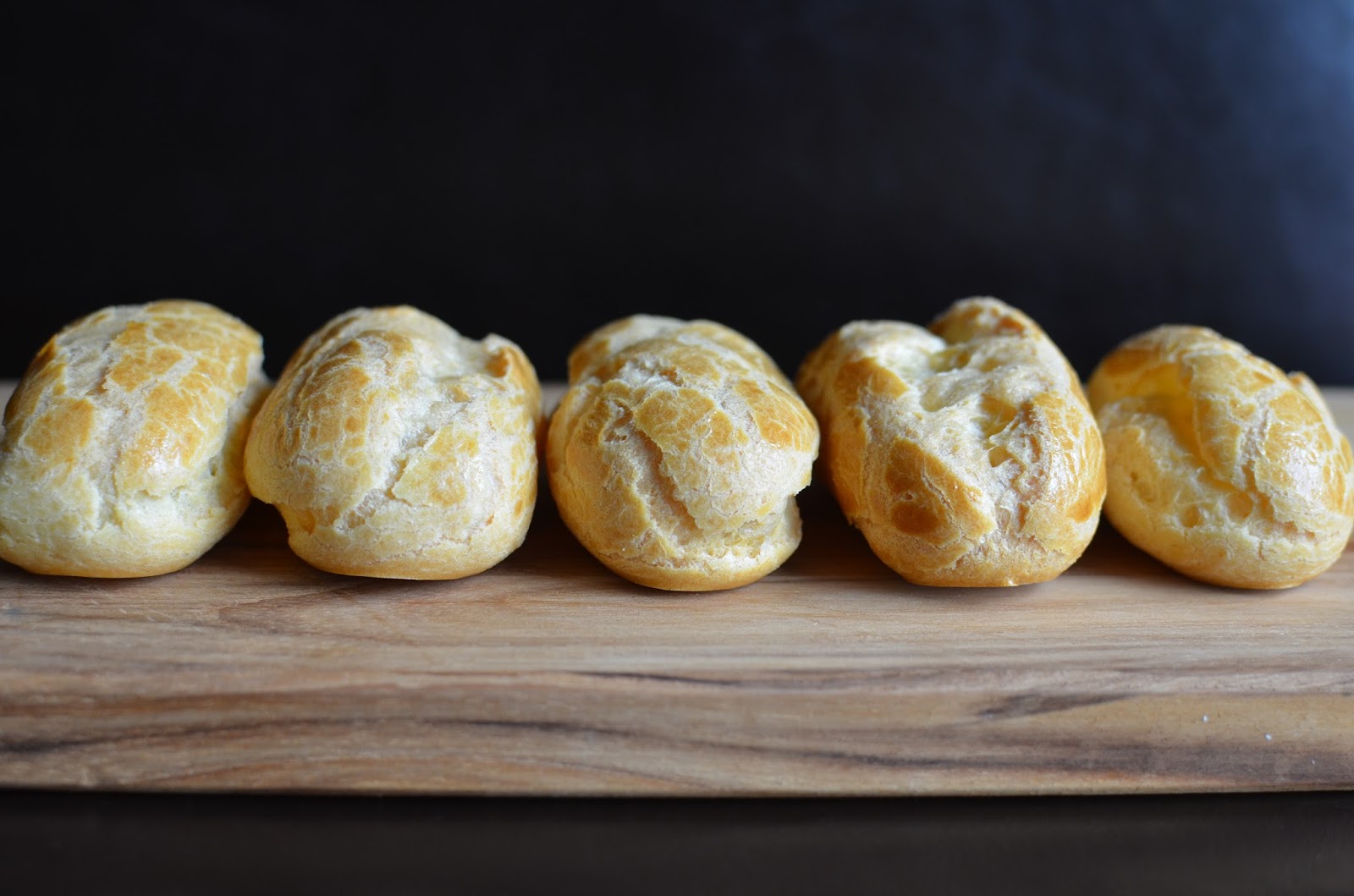 And my eclairs sort of flared and expanded at will during baking.  I've been taking those perfectly narrow, straight eclairs at the pastry shops for granted, it seems!  I read that you can run a wet fork over the dough before baking so they'll rise evenly but since I didn't try it, I'm not sure if that works. 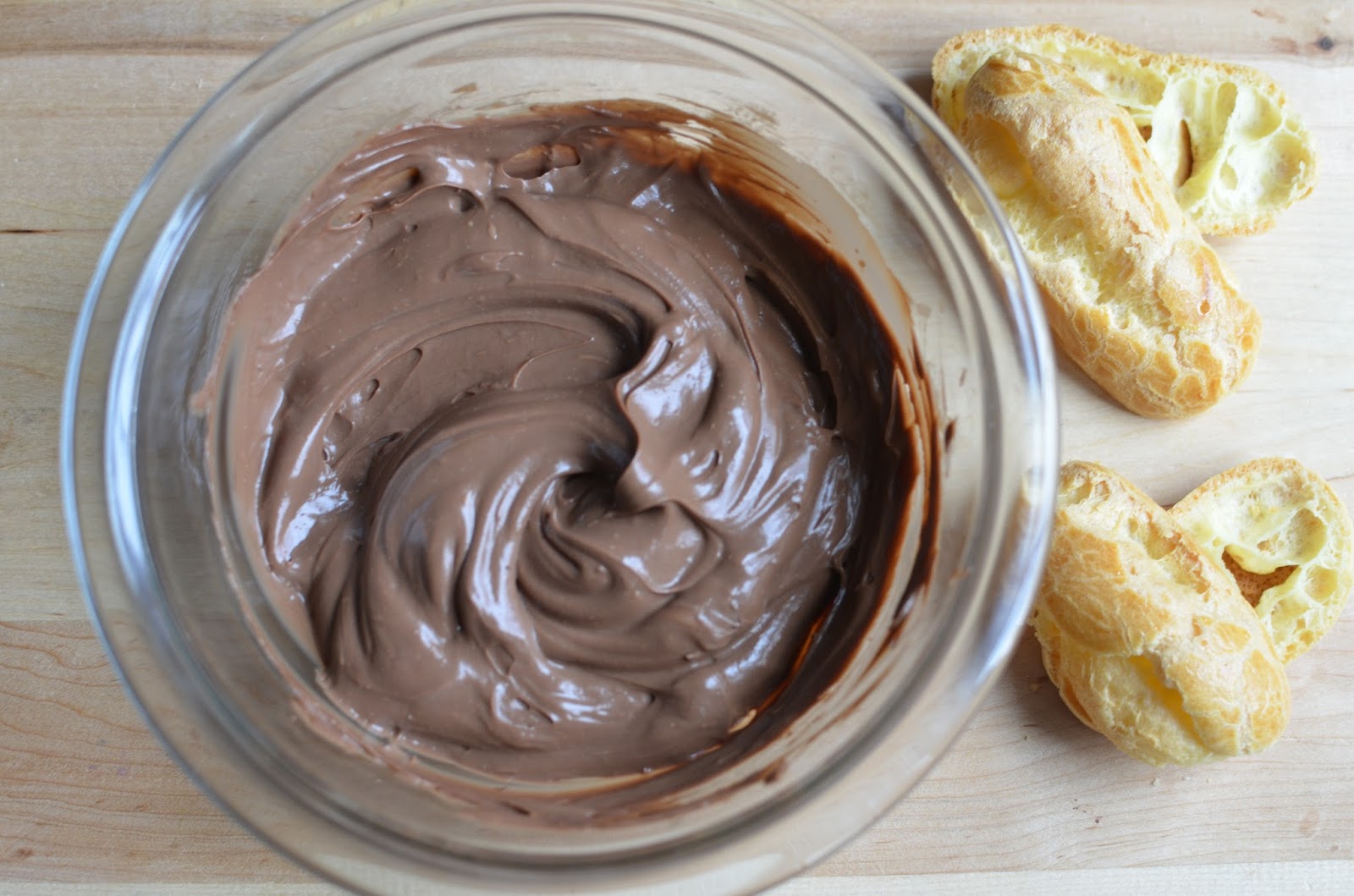 I decided not to be a hero and just sliced my eclairs in half for filling.  It's easier than trying to make incisions and piping the pastry cream at either ends. 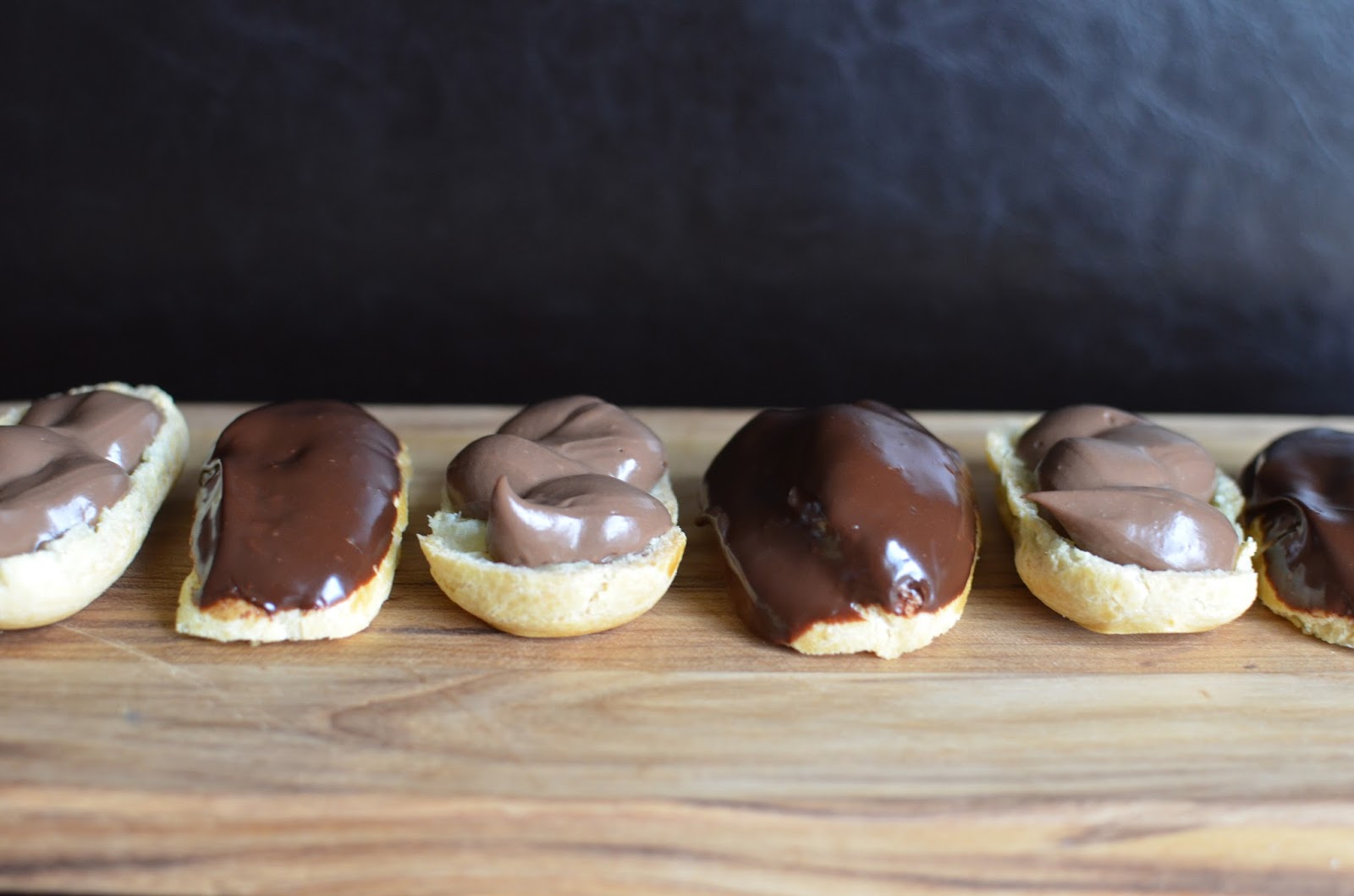 I made the pastry cream the day before so it has plenty of time to chill and firm up. Just stir it together gently before using.  I was afraid the pastry cream was too stiff but it was perfectly creamy, almost pudding-like. 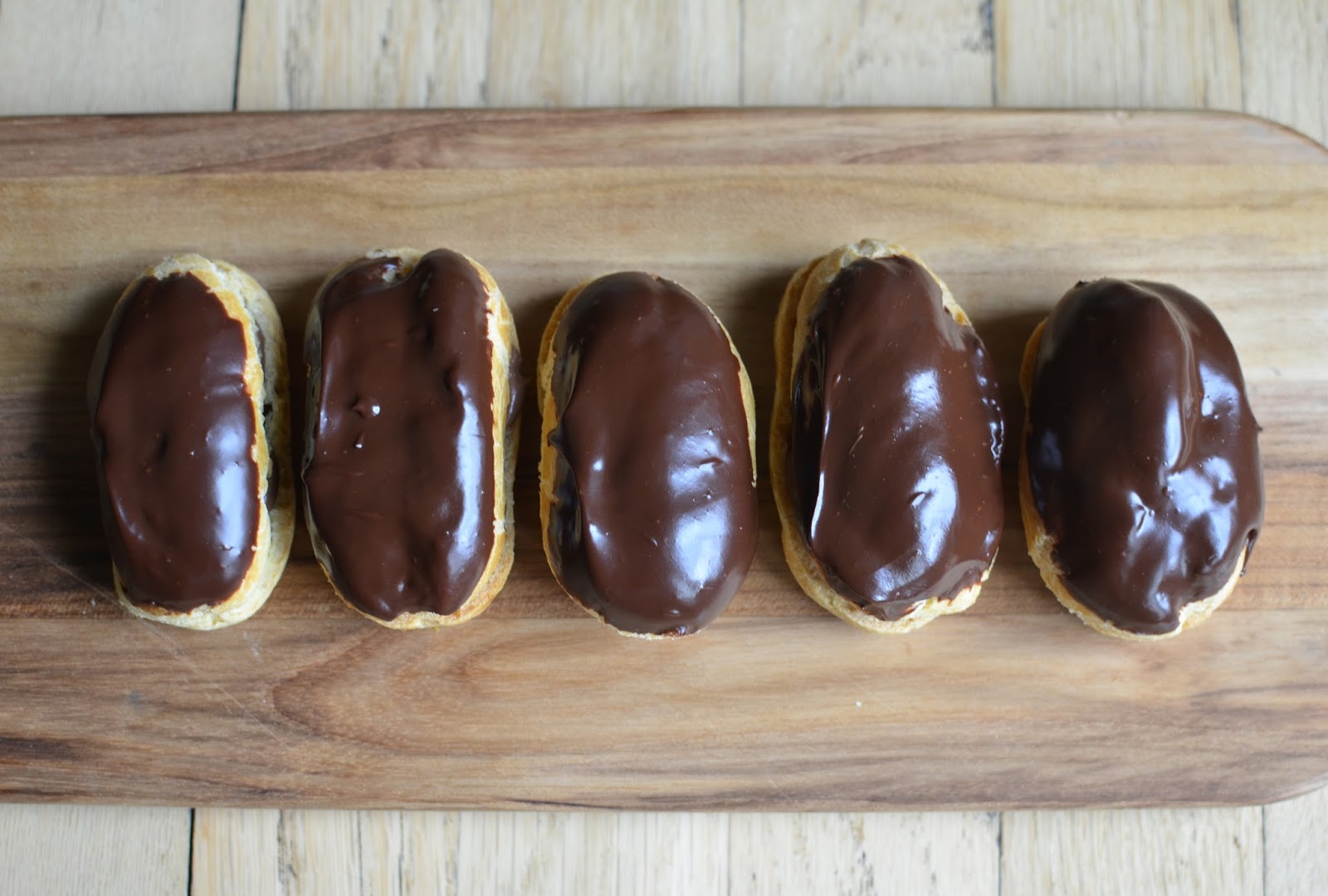 All's well that ends well and this was a good experience. 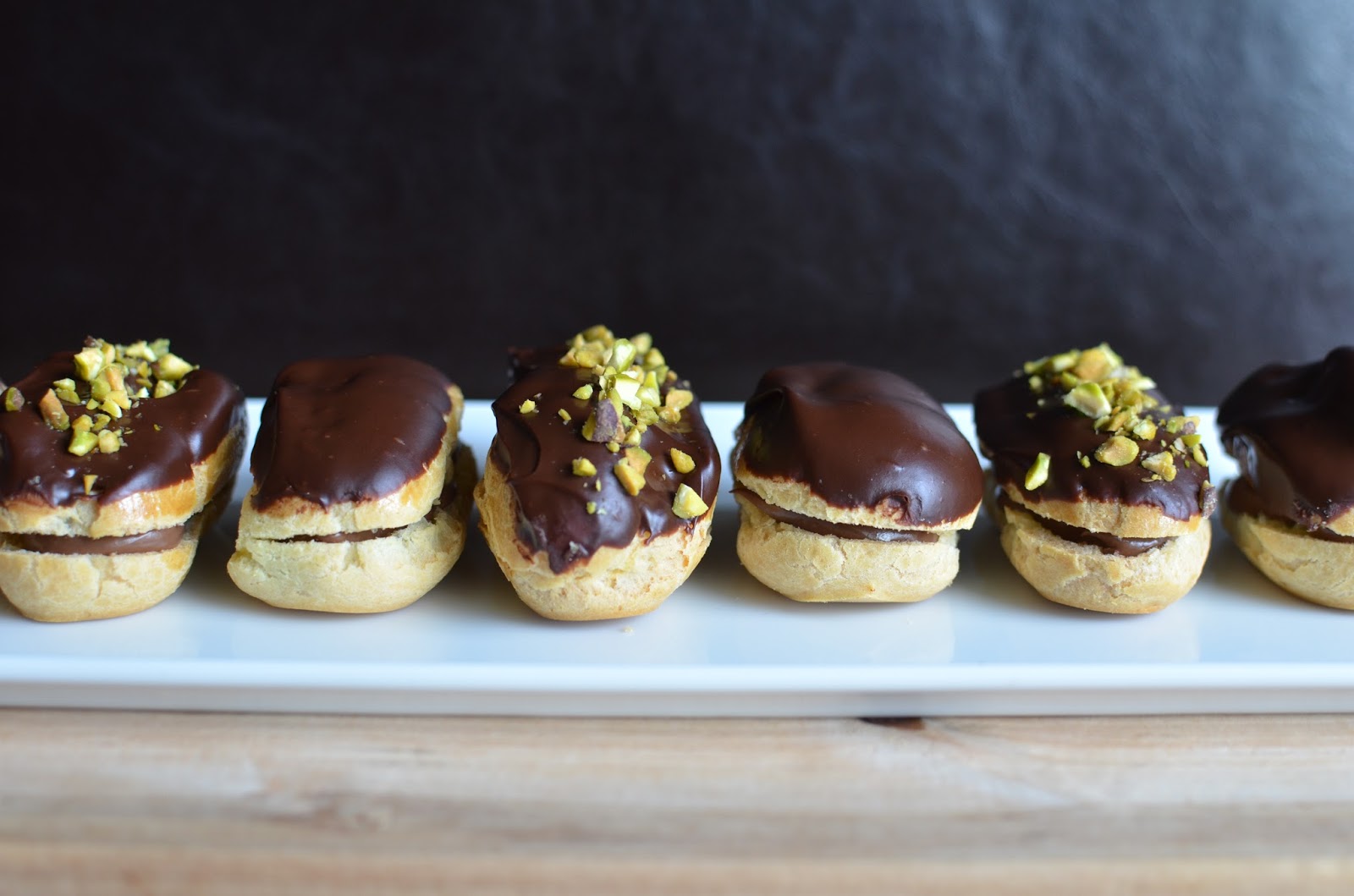 Finally eating the eclairs was a nice reward after everything!  Most of us actually preferred the eclairs slightly chilled.  The slightly cold filling against the pastry just has a nice sensation to it. 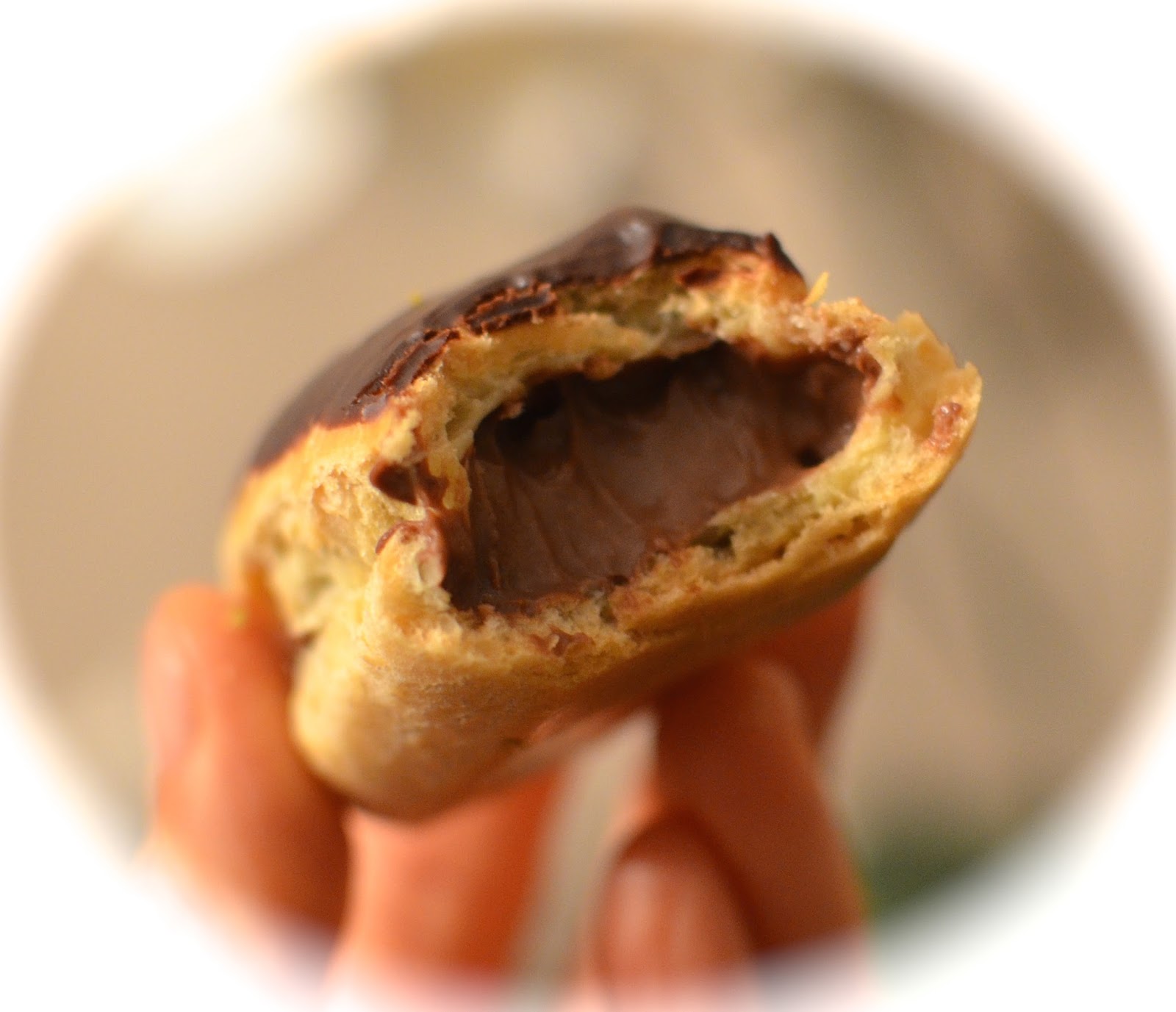 Make chocolate pastry cream: Bring milk to a boil in a medium saucepan.  In a medium heatproof bowl, whisk the egg yolks, sugar, cornstarch, and salt together. Temper the egg mixture by streaming in some of the hot milk while whisking constantly.  Continue whisking while adding the remainder of the milk.  Pour the mixture back into the saucepan and, whisking constantly and vigorously, bring to a boil over medium heat.  Keep at a boil - continuing to whisk - for 1 to 2 more minutes. Then press the thickened cream through a sieve into a clean bowl.

Whisk in the melted chocolate.  Leave sit for 5 minutes, then whisk in the butter, stirring to fully incorporate.  The pastry cream should be silky and smooth.

Press a piece of plastic wrap directly on the surface of the cream and refrigerate until thoroughly chilled, at least 2 hours.  (If you need to rush this process, you can set the bowl on top of an ice bath and stir the mixture occasionally until cold.)

Make pate a choux: Preheat oven to 425 degrees.  Line a baking sheet with parchment paper or a silicon baking mat.

Place water, sugar, salt, and butter into a saucepan.  Bring to a rapid boil over high heat.  Add the flour all at once, lower the heat to medium-low and quickly start stirring the mixture together energetically with a wooden spoon.  The dough will come together and a light film will form at the bottom of the pan.  Keep stirring vigorously for another minute or two.  [This step of cooking the dough is very important; it dries out the dough so that the pate a choux will not be too watery.]

Transfer the mixture to a piping bag fitted with a plain round tip about 1/2" wide. Pipe dough into about 2 1/2 to 3 inch (or size you prefer) logs onto the baking sheet, spaced about 1-2 inches apart.

Lightly beat the egg and water together to make an egg wash.  Gently brush the top of each eclair with some of the egg wash.  Use the brush (or wet fingers) to smooth down any pointy ends.

Place baking sheet into the oven and immediately turn oven temperature down to 375 degrees.  Bake for 20 minutes without opening the oven door, then rotate pan and continue to bake for another 10-15 minutes, or until eclairs are golden brown on top and bottom, and feel firm to the touch.  Transfer eclairs to a rack to cool to room temperature.

Make ganache:  Place chocolate and instant espresso powder (if using) into a heatproof bowl.  Heat cream with corn syrup until just to the boil and immediately pour over the chocolate.  Let sit 1 minute, then gently whisk until incorporated and smooth. Let sit at room temperature just enough for the ganache to thicken slightly.

Assemble eclairs:  Slice eclairs in half lengthwise.  Take the top halves and dip into ganache and set on a cooling rack.  If topping with nuts, sprinkle it on now before ganache sets.  Fill the bottom halves by piping or spooning the chocolate pastry cream (stir together before using) into the hallow pockets.  Carefully place the tops back on each.  Store in the refrigerator until ready to serve.  The eclairs are best eaten the same day they're made.