Spinach, onion, and mushroom quiche with a quinoa crust

It's 2015 and time for the first post of a whole new year.  I hope you had a wonderful holiday break!  The last couple of weeks have been wonderfully relaxing.  My husband took a holiday from work (the little guy was in heaven spending so much time with dad at home) and we loved the quiet time spent hanging out together.  I cooked a ton and got to try out a few new recipes. Being able to sit down together a few times a day to enjoy a hot meal around the table was a real treat.  Those are the moments I treasure the most and I hope there are many more in the years ahead. 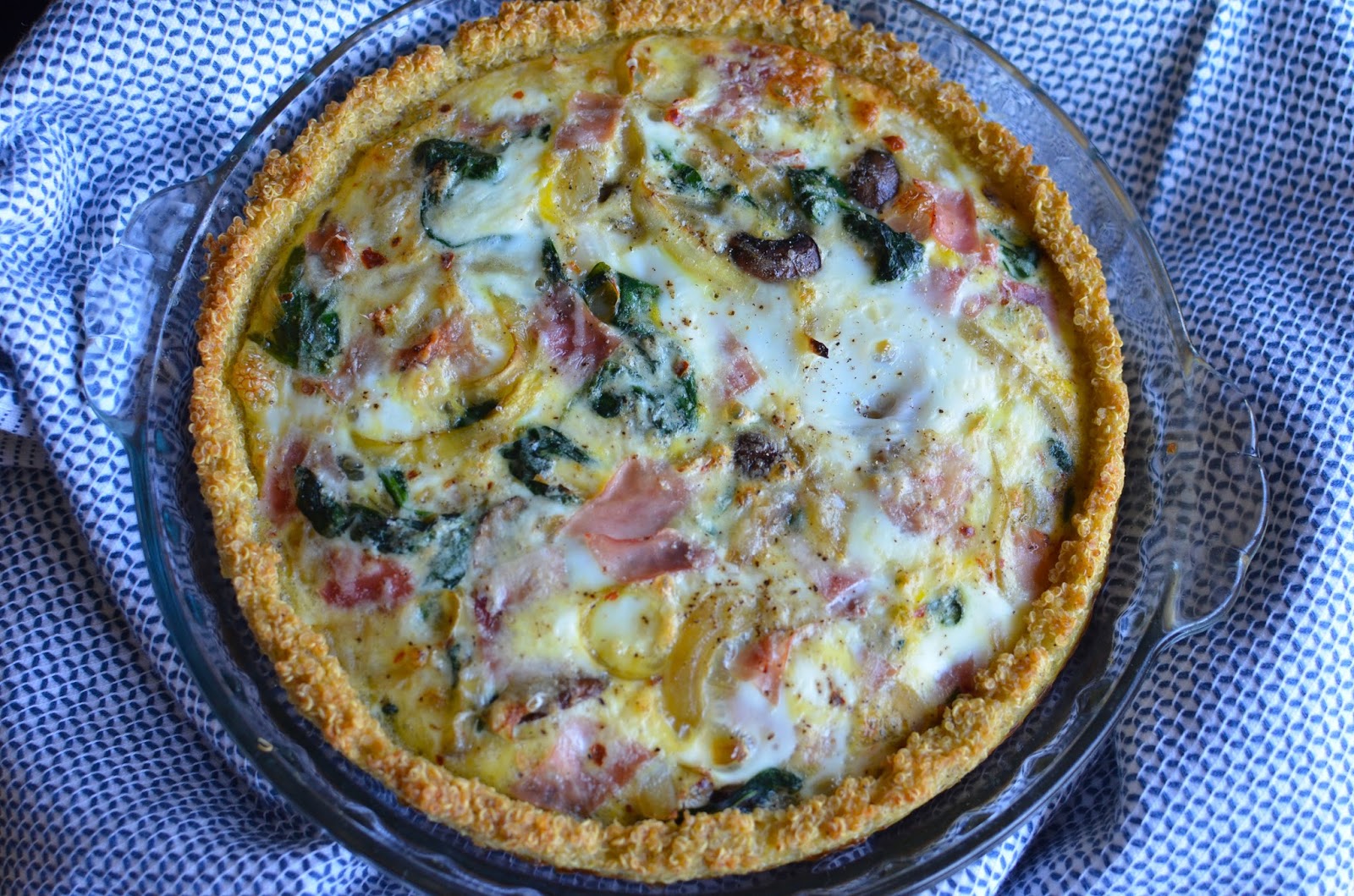 One of the recipes I got to try out during Christmas vacation was this quiche.  I am talking about a quiche with a quinoa crust!!  Talk about genius!  The idea/recipe popped out at me from the December 2014 issue of Cooking Light and as someone who's always looking for ways to eat healthier yet still deliciously (as well as a fan of quinoa), I knew I had to try it. 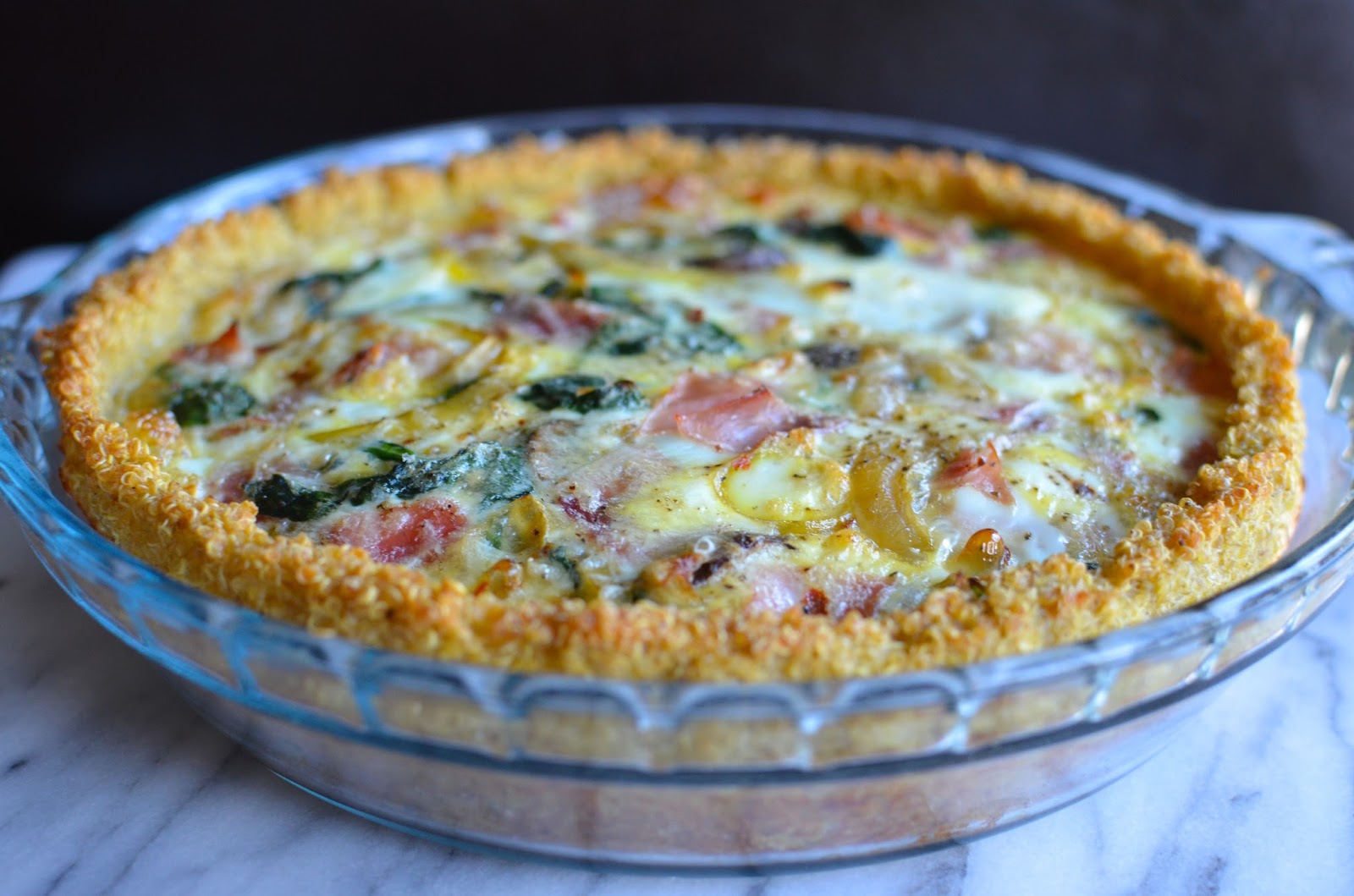 I know the trend is to lighten up in January.  That's sometimes a necessity after the holidays but I have realized that I am just not into dieting.  I don't like gorging one day only to deprive myself the next (I speak from experience).  So I try not to approach January with a sense of repentance for my December indulgences.  I try to maintain a year-round eating philosophy of balance - eating plenty of healthy, whole foods and also savoring my sweets because dessert makes me happy and sweeten my life in more ways than one!  To that end, I tried to "indulge responsibly" during the holiday season, and I think I did pretty well.  But of course, the emphasis is always on "trying" and in general, I think it's good to remind yourself not to be too uptight about it one way or the other.

So I don't think of a recipe like this lighter quiche as "diet food".  I think it's just a smart way to eat.  You swap out the rich, buttery crust that you typically expect with a quiche for this hearty fiber-full quinoa crust that's built on just quinoa and an egg as binder (along with some seasoning).  It acts as a great foundation for whatever you wish to fill your quiche with.  That's the beauty of a quiche or a frittata - the filling options are endless and infinitely customizable. 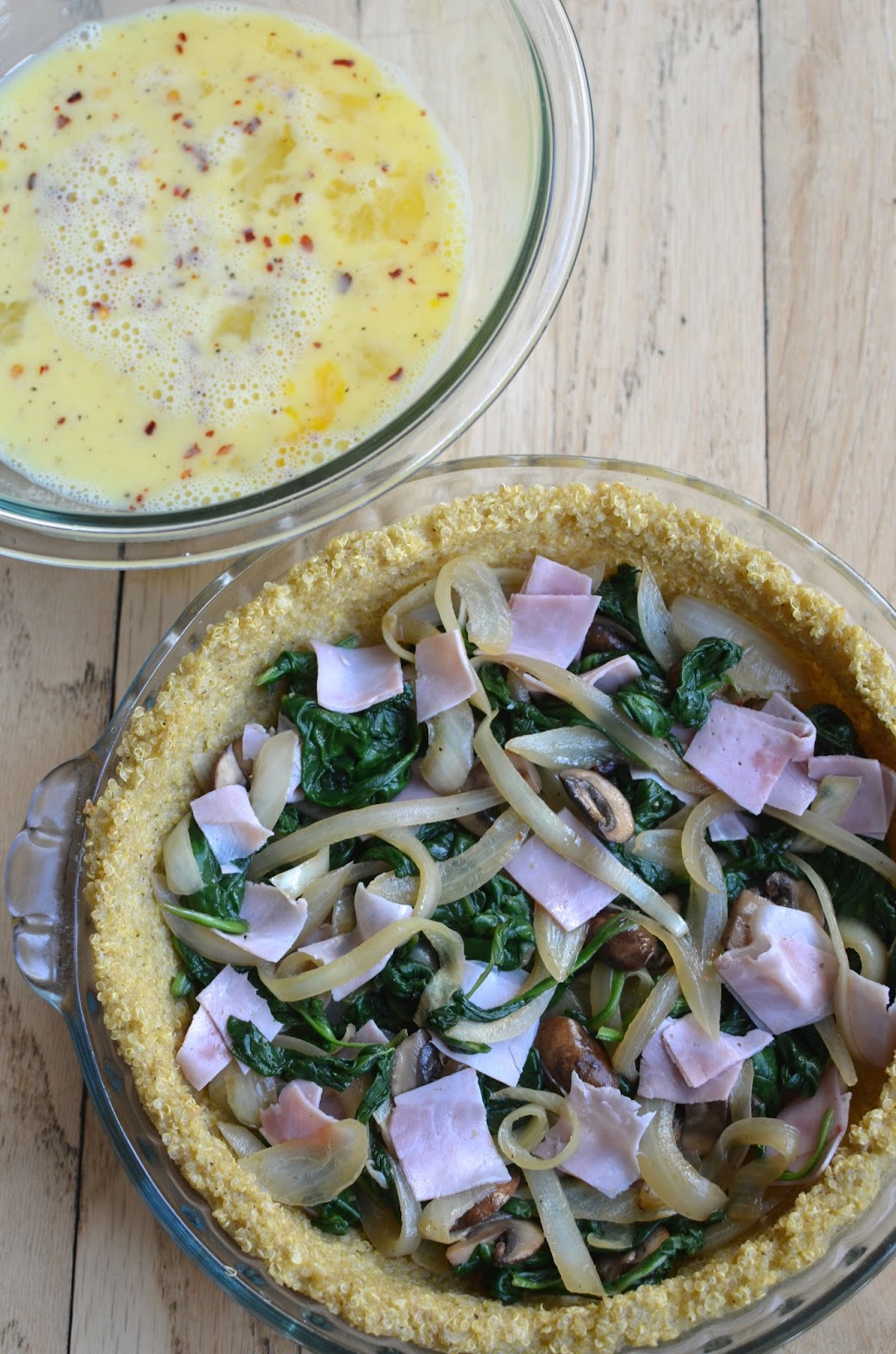 I built on the Cooking Light recipe, starting with spinach and onions and adding some mushrooms.  You can keep your quiche vegetarian or add some meat, like I did with a little ham.  I couldn't help but think that just a little bit of cooked chicken sausage would be great if you're looking for something a bit more substantial.  Instead of feta cheese, I used some parmesan cheese in my quiche.  And with just half a cup of 1% milk, a few eggs and egg whites to pull everything together, I had a flavorful quiche that didn't weigh me down at all. This is great for breakfast, lunch (brunch), or dinner, and leftovers rewarmed quite well.


For the quinoa crust, you need 2 cups of cooked quinoa.  The quinoa should be chilled so I made a batch a day ahead (whenever I cook quinoa, I wonder why I don't do it more regularly since it's so easy and quick).   I make sure to rinse my quinoa thoroughly and I use a little less than 1 2/3 cup of water to 1 cup of quinoa and in about 15-20 minutes, I have fluffy quinoa ready to go.  One cup of uncooked quinoa makes almost 4 cups cooked.
Stir 1 beaten egg into the quinoa and season it with some salt and pepper.  Then, just press the mixture into a lightly greased 9-inch pie plate.  Bake for 20 minutes at 375 degrees.  It won't be very brown at this point but will be dry and set. 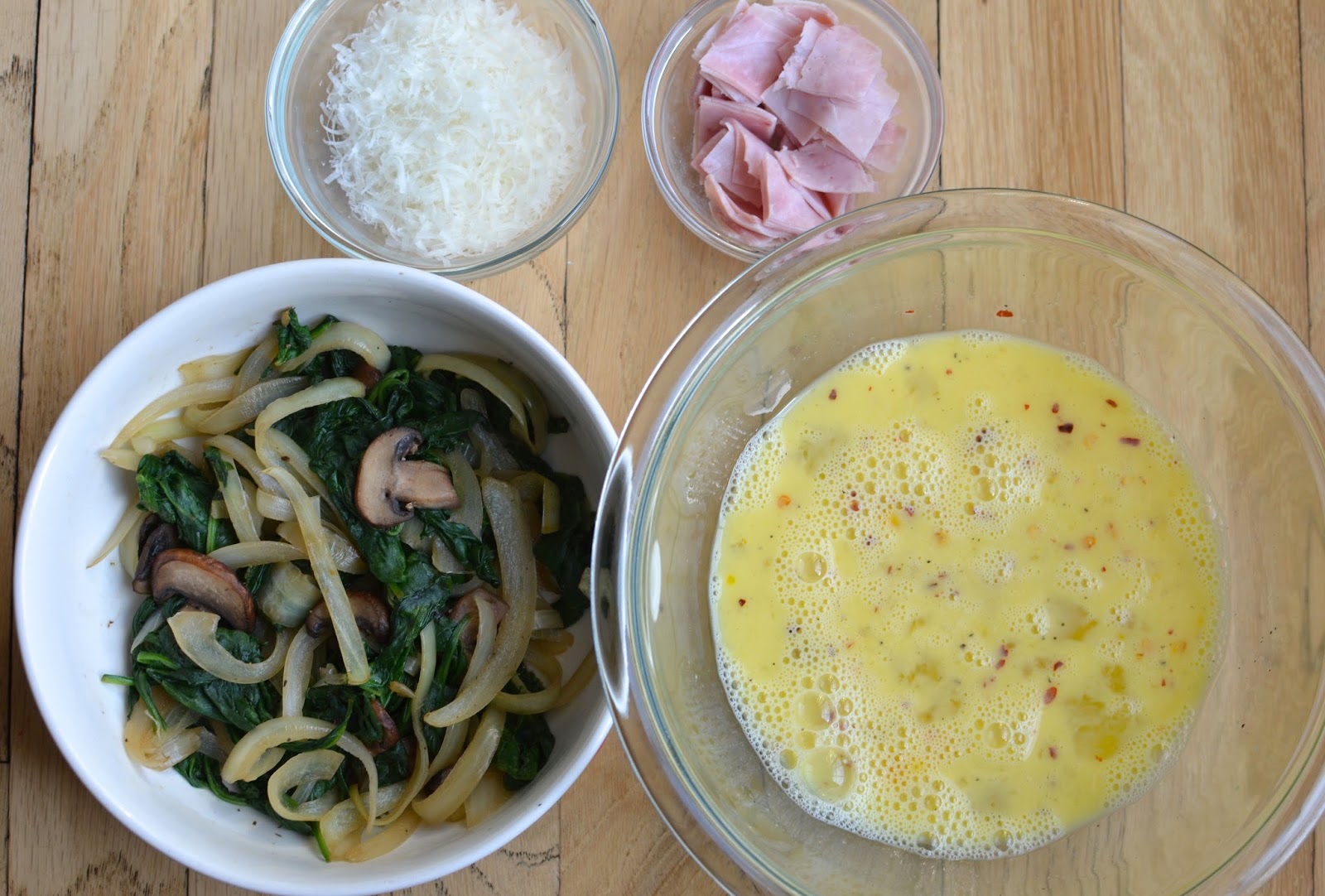 For the filling, I cooked up some onions, spinach, and mushrooms.  I also added a couple slices of deli ham and a bit of grated parmesan cheese. 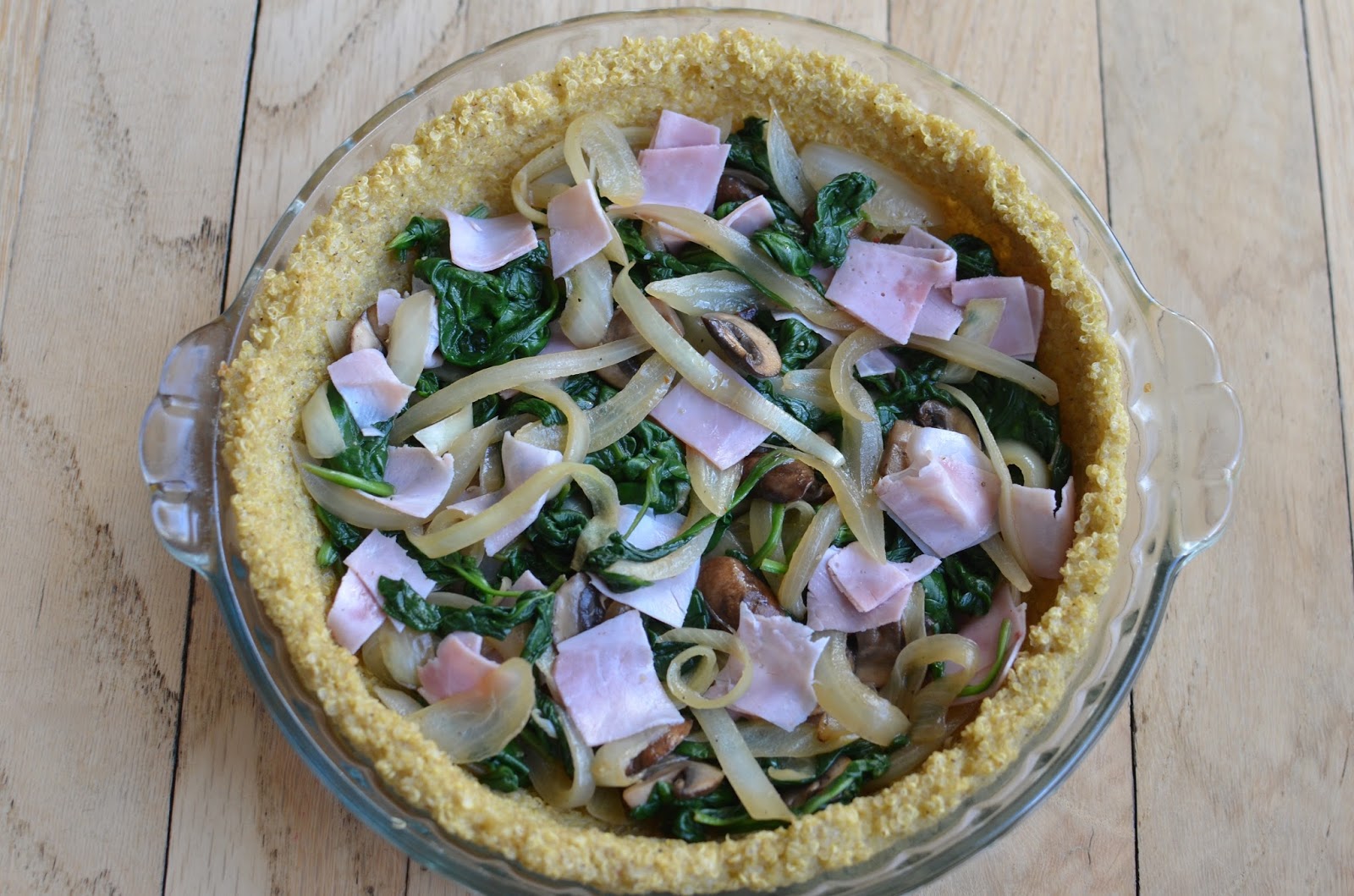 For the custard, I decided to use 3 extra-large whole eggs (instead of 4 large ones per the recipe) and 2 large egg whites, along with half a cup of 1% milk. 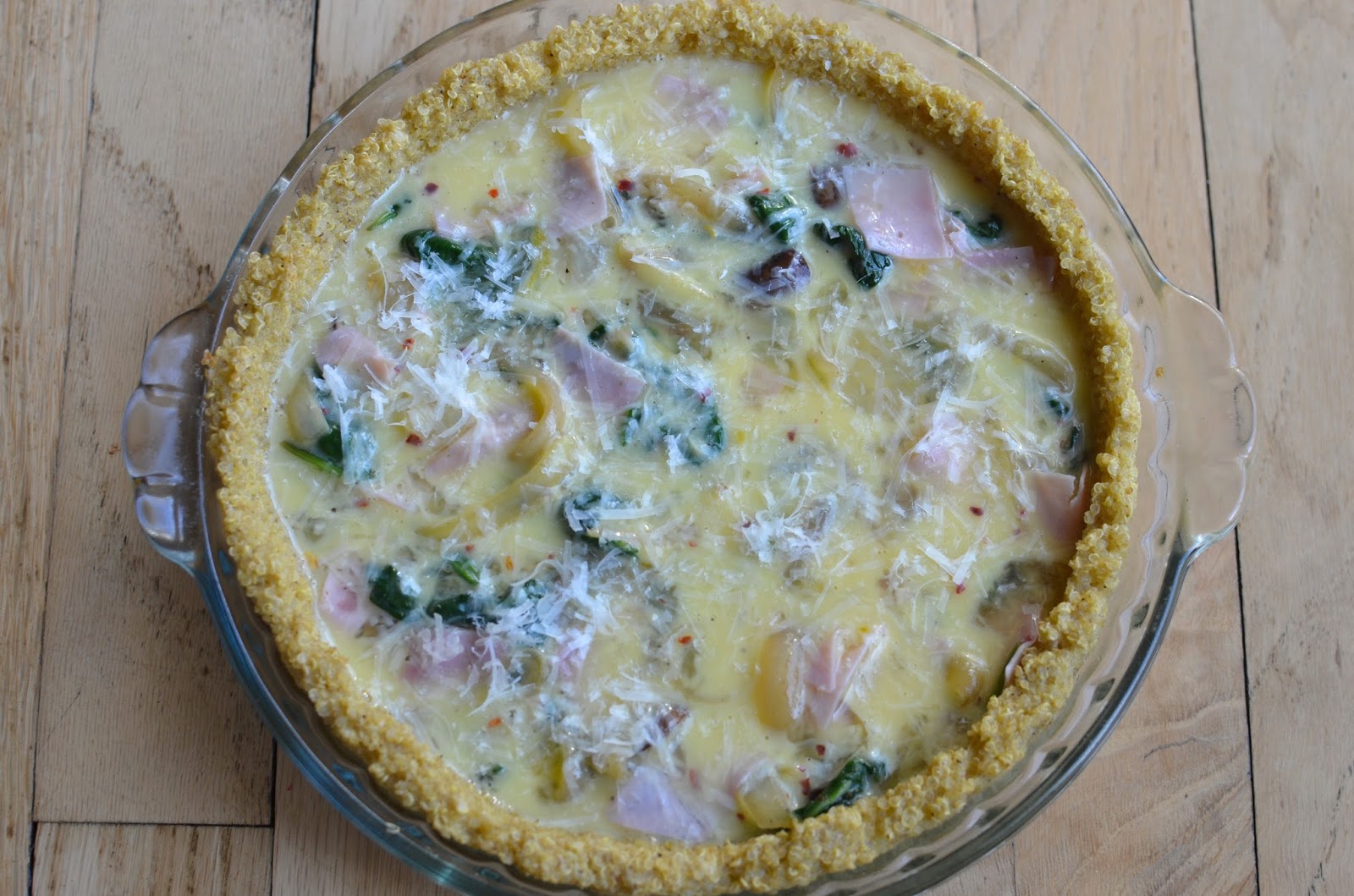 After about 35 minutes in the oven, the filling is set and the quinoa crust is nice and golden (plus, crunchy) along the rim. 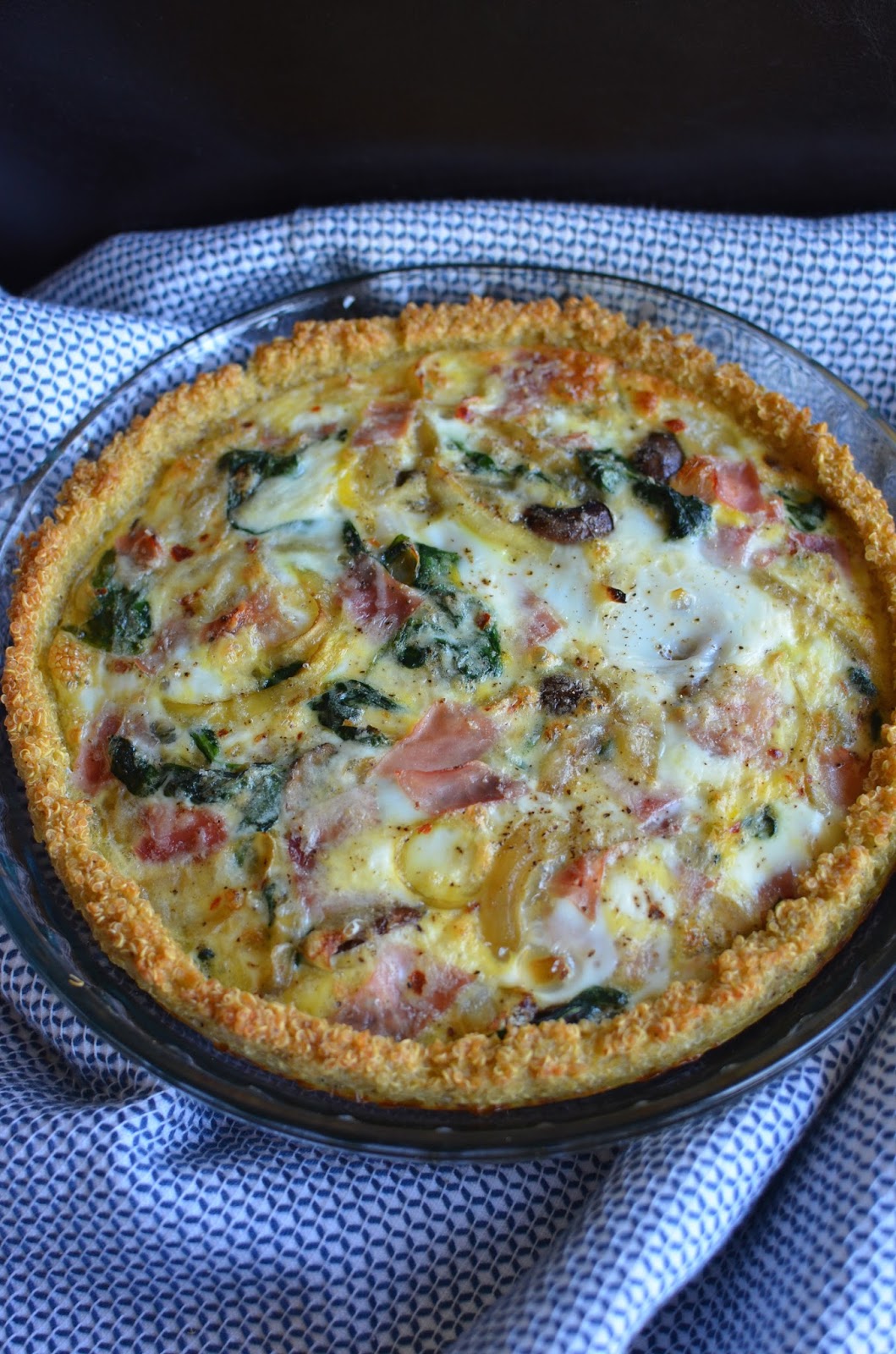 I was proud to pull this quiche out of the oven and happy to dig into it for lunch right after these pictures were snapped.  The quinoa crust is sort of a quiet foundation for the flavorful filling.  My husband and I really enjoyed it.  We thought it looked rich but tasted so wonderfully light! 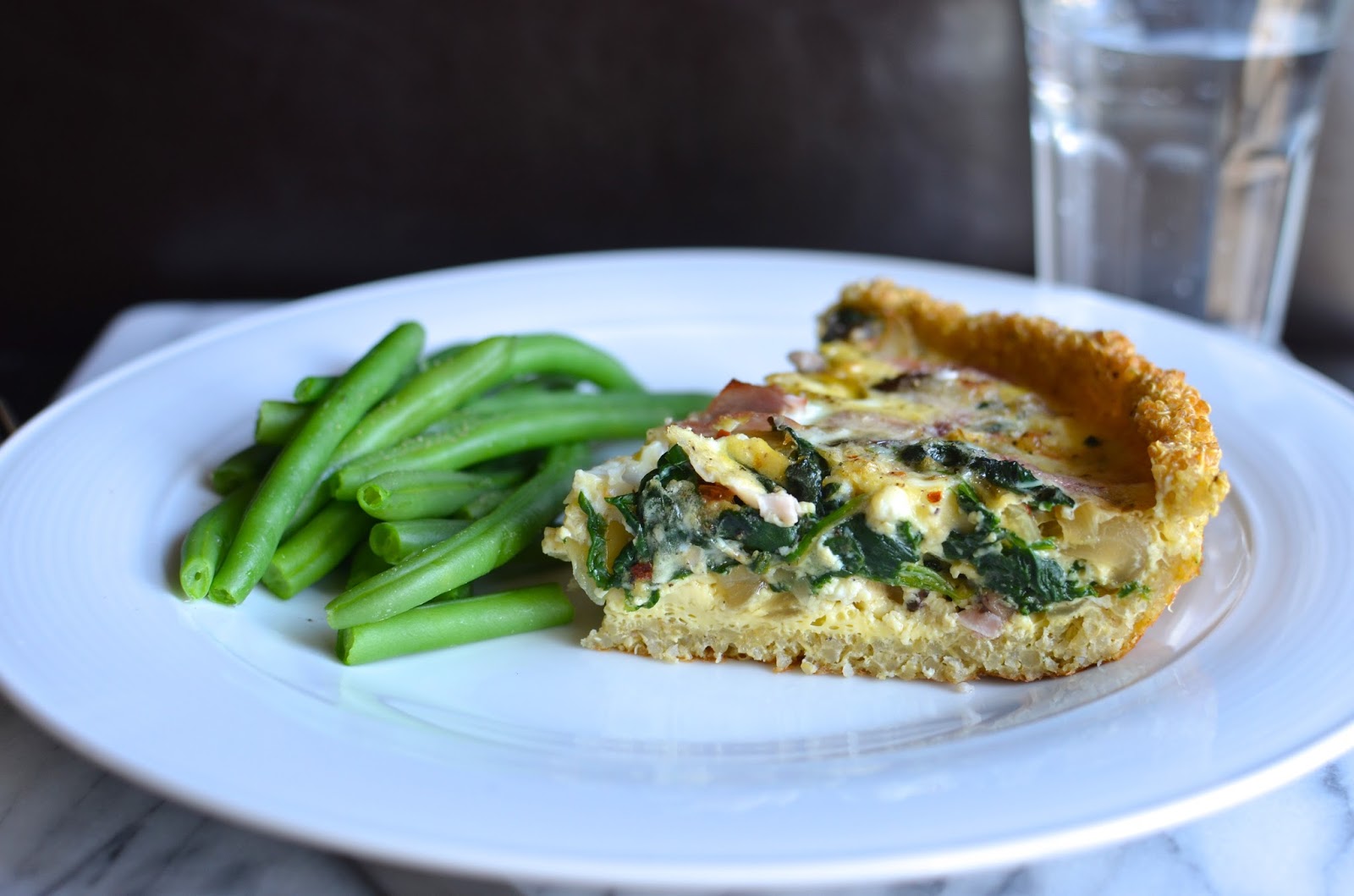 This is intended to be divided into four portions, which is quite generous.  The recipe from Cooking Light, which had feta cheese in it, clocked in at under 300 calories per generous serving.  I'm not saying you need to count calories but I do think the stats are pretty impressive in this case.

Here's to a great start to a New Year filled with good things!

Make crust: Preheat oven to 375 degrees.  Lightly spray a 9-inch pie plate with cooking spray.  Season quinoa with some salt and pepper and stir in the egg using a fork.  Press mixture into the bottom and up the sides of the pie plate.  Bake for 20 minutes, then let cool.

In a mixing bowl, whisk together the milk, 1/2 teaspoon salt, 1/4 teaspoon of black pepper as well as crushed red pepper flakes, the eggs, and half the parmesan cheese.

Arrange the filling (omitting any liquid from the bottom of the pan) into the quinoa crust and scatter the ham around.  Pour the egg mixture on top of the filling and sprinkle the remaining parmesan over top.  Bake at 375 degrees for 35 minutes, until filling is set and the crust is golden brown.  Let cool about 5 minutes before serving.