I've been curious about making macarons using the Italian method for a long time. Until now, it's always been the French method (so called because it's based on the method of making French meringue by simply whipping egg whites to stiff peaks).  It can be hard to force yourself out of your comfort zone, particularly one relatively hard-earned as was the case for me when it comes to macaron-making.  So I've been putting it off and waiting for the "mood" to hit...it finally did and I gave it a try last week (on Bastille Day, coincidentally).
When it comes to the Italian method of making macarons, the recipe involves an Italian meringue, where hot sugar syrup is poured into egg whites and beaten to stiff, thick, glossy peaks.  To hear it, that alone is a little intimidating.  Plus, it adds another step to the already intricate macaron-making process.  But I'd heard good things about this method - how it makes the meringue more stable and provides you with a more consistent result.

So I'm here to report my findings; pardon me for being too wordy because I do realize this may only be this interesting to me...

The Process and the Result

For my inaugural batch of macarons made using the Italian method, I used Dorie Greenspan's recipe from Baking Chez Moi because what better teacher than Dorie for a project like this.  As I often do, I divided the recipe in half thinking I didn't need 45 macarons in the house (in the end, however, my quantity turned out quite a bit smaller than expected).  Dividing the recipe isn't difficult using a scale but working with a small amount of egg whites is a bit tricky.  In the end, it worked out just fine from what I can tell. 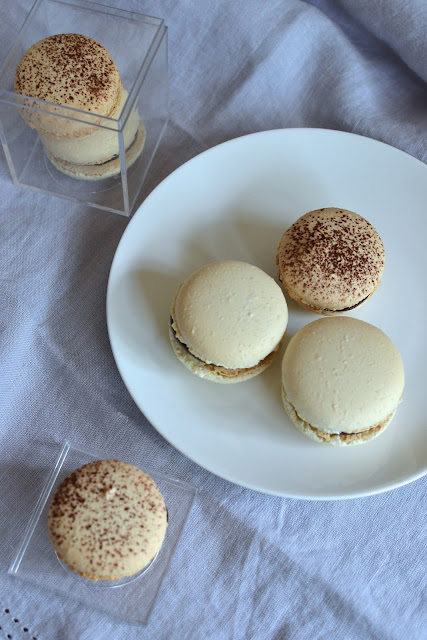 To focus on the method itself, I made basic almond macarons (no food coloring or additional flavors; I did dust a few with cocoa powder for aesthetics).  The filling is a chocolate-hazelnut ganache, which I went with mainly because I wanted to use up some leftover hazelnut praline paste, and because it's delicious.
There definitely is a learning curve here and while I'll need to give it another round or two to fully get the hang of it, I have to say that this method did make for a more "professional" (for lack of a better word) caliber macaron.

I've almost always had trouble with hallow shells, or a bit of a gap/air pocket in my macaron shells, and this batch turned out dense and chewy, without that noticeable gap.  That's pretty major to me since that has always been the main thing bugging me about my homemade efforts.  These macarons were sturdier, less-fragile than the ones I make with the French method. 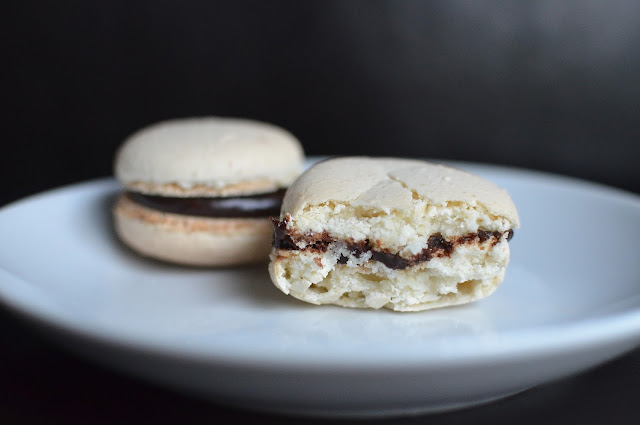 Overall, making these macarons was a learning experience.  I'm convinced it takes about 3 attempts at a macaron recipe to get it "right" or to be comfortable with it because there's so much like your oven temperature and so on involved that calls for a little "watch-and-see".  That said, I've learned not to sweat it.  Making macarons requires paying attention to the steps but they don't need to turn out perfect.

Much like the French method I've used in the past, I never really know exactly what I'm going to get.  Sometimes you get lofty height and prominent feet while, other times, that feet is not quite so pronounced.  It was the case here.  The macarons on the first baking sheet that went in the oven puffed up quickly and I was actually afraid the shell might split so I actually turned down the oven temperature a bit near the end.  Ironically though, the macaron shells settled down after baking and that first batch ended up with a less pronounced feet than the second batch! 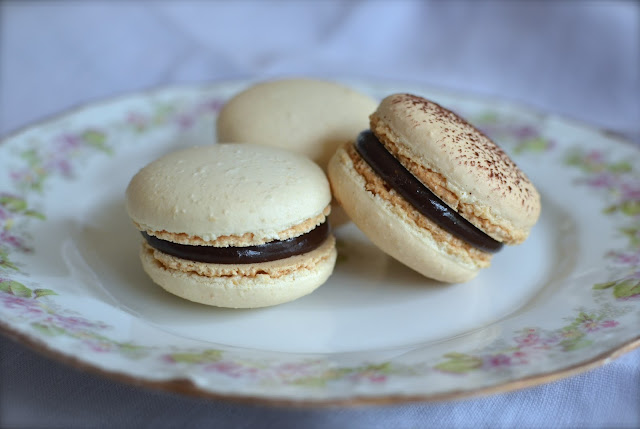 When it comes to the Italian vs. French method of making macarons, here are the pros of the Italian method from my experience: 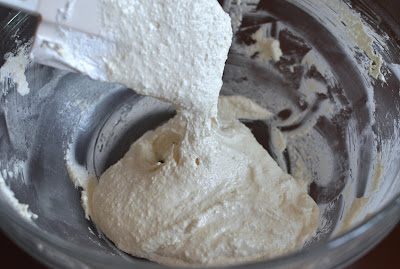 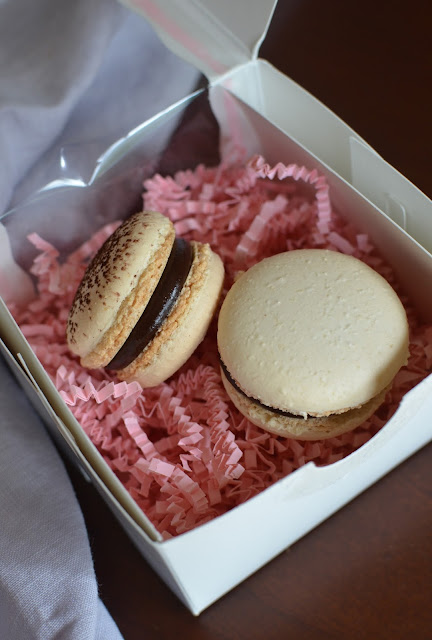 This was my first attempt at the Italian method so I'll need more firsthand experience to answer definitively...but as of this moment, I have to say that I prefer this Italian method!

I love that they don't have the hallow shell issue (hopefully, it's not a one-time thing) and they just seem sturdier.  The process is more time-consuming but I like how the batter is less delicate to work with.  The next batch of macarons I make will be using the Italian method. 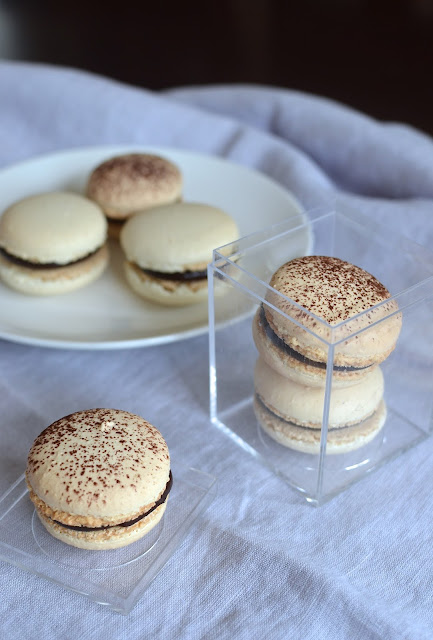 An interesting side note, do you ever wonder which of these methods the pastry shops - those known for their macarons - use?  When my husband tasted this batch, he commented that they were more like Bouchon Bakery's macarons and I agreed.  With a little research, I see that (at least according to published recipes) Bouchon Bakery uses the Italian method, as does Pierre Herme.  But...Laduree, the pastry house synonymous with macarons, uses the French method (you can find recipes in their book).  Interesting...

As with most new recipe or technique you're trying for the first time, you learn and realize things you might want to do differently next time.

I found Dorie's detailed instructions helpful and easy to follow.  The one thing that tripped me up (aside from my own inabilities such as not being able to pipe the shells the same size - they always start off about the intended size but then get larger and larger!) was the process of whipping the egg whites while the sugar syrup heats up. 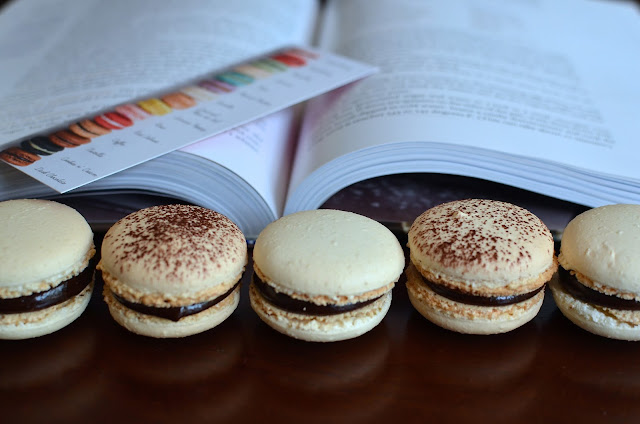 You whip the whites in the mixer to medium-firm peaks and then the recipe says to turn the speed down to low while the sugar comes up to temperature.  Without any sugar in the whites at that point, I found my egg whites breaking.  When I added the syrup and everything was incorporated, my meringue was thick and glossy but there were small lumps that I felt shouldn't be there.  Next time, I'm going to time the whipping of the whites closer to when I expect the syrup to be ready.  Luckily, there were no issues with the taste and final texture of the baked macaron shells. 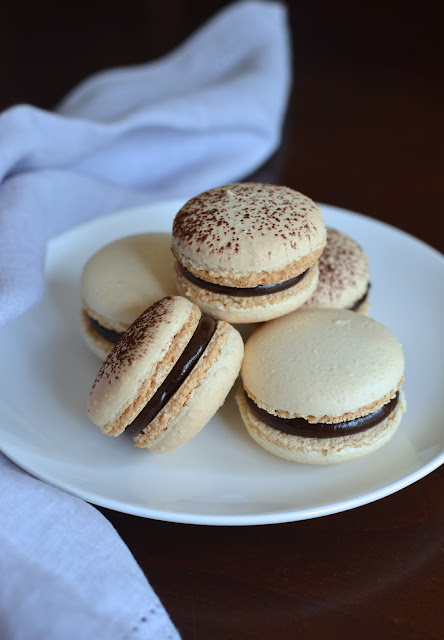 Also, the oven temperature for baking these, at 350, was higher than the typical 300 degrees I'm familiar with.  I find you might want to keep a close eye on them.  While I kept the temp. mostly at 350, I did adjust it in some moments when I thought the oven might be running too hot.  Macarons are just entirely unique in some of these nuances.  Or is it just me?!

What do you think? If you've tried both the French and Italian methods of macarons, I'd love to know what you think and which you prefer.  I'm very curious! Any suggestions, comments, tips would be much welcomed!

Macarons, the Italian Method
Macaron recipe adapted from Baking Chez Moi by Dorie Greenspan (more detailed recipe/instructions in the book), with some of my notes
Chocolate-hazelnut ganache filling from my past experiment

For chocolate-hazelnut ganache filling:
2 ounces semisweet chocolate (or you could use a mix of milk and dark chocolate), finely chopped

Set a strainer over a large bowl and press the almond flour and confectioners' sugar through the mesh.  Whisk to combine.

Place half the egg whites in a bowl of a stand mixer fitted with the whisk attachment. Pour the other half of the whites over the almond meal/confectioners' sugar.  Using a rubber spatula, mix and mash the whites into the dry ingredients until you have a homogeneous paste.  It will be thick, almost resembling almond paste.

In a small saucepan, bring granulated sugar and water to a boil over medium heat.  If there are spatters on the side of the pan, wash them down with a pastry brush dipped in cold water.  Using a candy thermometer, cook syrup until it reaches 243 to 245 degrees, about 10 minutes.

In the meantime, beat the egg whites on medium speed until they hold medium-firm peaks.  Reduce the mixer speed to low to keep the whites moving until sugar syrup comes up to temperature [I know this is tricky but I'd try to time this close to when the sugar comes to temp to avoid over-whipping the whites since they tend to break when whipped without sugar.]

When sugar is ready, carefully take the pan off the heat, removing the thermometer. With the mixer on low speed, carefully pour the hot syrup in between the moving whisk and the side of the bowl.  You'll have some sugar splatters but ignore them; do not try to incorporate them into the meringue.  Raise the mixer speed to high and beat until meringue cools to room temperature, about 10 minutes.  You'll be able to tell by touching the bottom of the bowl.

Give the almond meal mixture a quick mix, then scrape meringue over it and fold together with a sturdy rubber spatula.  Do not be gentle; you are using the spatula to cut through the meringue and the thick almond mixture.  Cut your spatula down into the bottom of the bowl, bring it over the top and press it against the side of the bowl (fold, mix, and mash pattern).  Continue doing this until the batter reaches the consistency of lava (lift your spatula up and it should flow down in a thick mass that settles into itself).

Spoon half the batter into the pastry bag.  Hold bag vertically about 1 inch above the baking sheet and pipe out 1 1/2-inch rounds, spaced at least an inch apart.  Pick baking sheet up about 8 inches above the counter and let it fall - this helps eliminate bubbles and promote smooth tops.  Refill bag with the rest of the batter and repeat with the second sheet.

Let batter sit on baking sheets in a cool, dry place until the surface is slightly dry (you can test by very lightly touching one with your finger and there should not be any batter sticking), about 15-30 minutes depending on temperature and humidity.  While this is happening, preheat oven to 350 degrees and have a rack set in the center position.

Bake macarons, one sheet at a time, for 6 minutes.  Then rotate the pan and bake for another 6-9 minutes, or until macarons can be lifted from mat or carefully peeled from the paper.  Remove from the oven, slide parchment or silicon mat with the macarons off the sheet and place onto a cooling rack to cool to room temperature.  Repeat with second baking sheet.  Once cooled, carefully remove macaron shells from parchment or baking mat and pair them up in size for filling.

Beginning at the center, slowly whisk the chocolate and cream together until combined.  Add the hazelnut paste and mix together.  Let the mixture sit at room temperature, stirring occasionally, until the ganache is fully cooled and thick enough to spread.

Finish macarons:  To pipe (this is fastest method), transfer ganache into a pastry or zip-lock bag, with a tip cut off.  Otherwise, simply use a small offset spatula to spread ganache (amount depending on your preference) onto a flat side of a macaron shell before sandwiching with another and gently twisting the top macaron until filling spreads to the edges.  Once sandwiched, place macarons into an airtight container and refrigerate for at least 24 hours (this "rest" allows them to soften slightly and for flavors to meld), or up to 4 days.  Bring macarons to room temperature before serving.