I don't watch a lot of TV in general but I do watch plenty of cooking shows.  I DVR my favorites (Giada deLaurentiis, Ina Garten, The Pioneer Woman, The Chew, The Cook's Illustrated shows on PBS...) but sometimes, I use the shows more as background noise while I'm thumbing through magazines or reading rather than something I'm watching earnestly.  It's not very often I'll watch a show that captures my undivided attention and makes me want to run into the kitchen to make a particular dish... 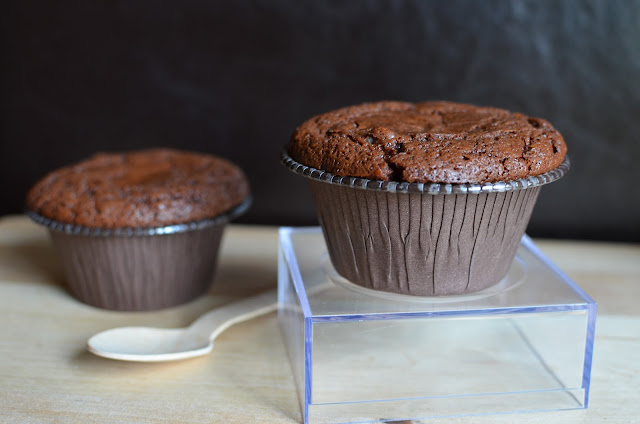 But it happened a couple of months ago when I was watching Ina Garten's Barefoot Contessa.  The premise was cooking restaurant food at home and it caught my attention when she started talking about re-creating a fish dish she had at Spago and then making a visit to Rao's in New York (that restaurant that's virtually impossible to get a reservation into).  Man, the food on this show looked amazing!  I wanted to make the prosciutto wrapped bass and skillet brownies right away!

I couldn't stop thinking about that dessert...warm (practically hot) individual brownies made in cute little individual portion skillets, served right from the oven with vanilla ice cream!  That pretty much sums up my ideal dessert!  The only problem was I didn't/don't have 3 1/2 inch mini cast iron skillets!  I actually thought about buying some but I knew that wouldn't be a smart move, particularly without even trying the recipe first.  I figured I could use ramekins but those little skillets really do look adorable! 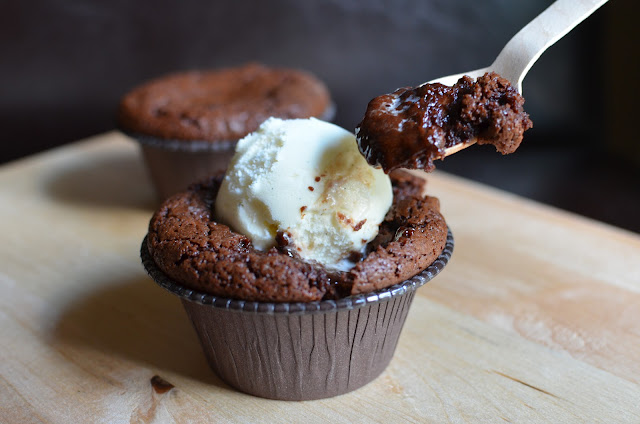 So my lack of mini skillets kept me from making these warm individual brownies for a while.  I finally decided to use these disposable baking cups from Garnish, a site I discovered recently and just adore!  You could definitely bake these individual brownies in ramekins, disposable pie tins or a cast iron skillet of whatever size you have (to share, family-style).  You'll need to adjust the baking time depending on what size dish you use but it's relatively easy to tell when the brownies are ready - they will puff up slightly, crust and firm up on top, but should still have a little wiggle to them when lightly moved.  You don't want to over bake them. 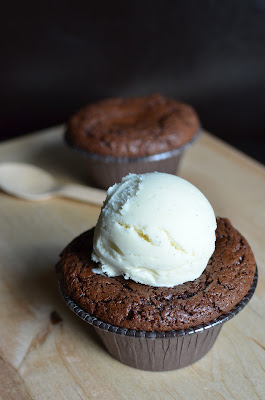 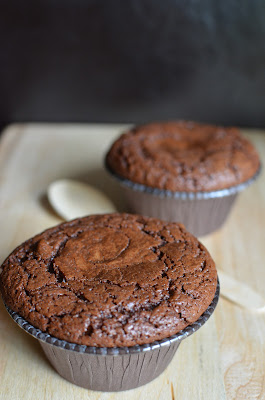 These are very much like molten chocolate cake, only with a bonus crusty top.  And we seriously loved the crust on these brownies that you can literally pick off with your fingers and eat.  Just crack into that sweet, crusty, chewy surface and spoon your way into the soft, warm, gooey center.  Topped with some homemade vanilla ice cream, it was a delicious after lunch dessert for us on a recent Sunday. 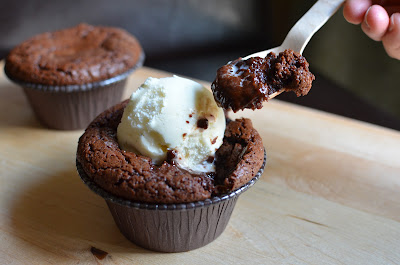 I couldn't get this simple dessert out of my mind and I'm sure glad I tried it.  If I had any complaint, I'd say the brownies were just a tad sweeter than necessary but that's just me being picky.  And by the way, I made the prosciutto roasted bass featured on the same show less than a week after watching it and that was delicious too! (I skipped the roasted vegetables and just baked the fish and topped it with a simple squeeze of lemon.  The ham really kept the fish moist and added a great salty flavor.)


I've been doing a few brownie recipes lately but it's just the kind of simple yet utterly satisfying dessert I love to bake and eat!

This recipe comes from Ina Garten, who says she was inspired by a restaurant meal in New York City where she had a very similar dessert.  Her version is based on her own brownie recipe, which I'd never made before and was happy to try out in the form of this warm, scoopable version here.

I divided her recipe in half and it was just the perfect amount of batter for two of my baking cups.  In Ina's recipe, she uses 3 1/2 inch mini skillets and the full recipe below should fill 5 such skillets.  Again, don't be afraid to use whatever size skillets/cups/bowls/ramekins you have.  Just keep an eye on the brownies as they bake and adjust the baking time as I discussed earlier.

Ina's brownie recipe is a fairly simple hand mix affair.  For half the recipe, I melted 2 ounces of semi-sweet chocolate chips, 3/4 of an ounce of unsweetened chocolate, with 4 tablespoons of butter.  Since I don't have coffee granules, I used instant espresso powder (to amp up the chocolate flavor) instead, stirring 1/4 teaspoon of it to the mixture.  Once melted, set aside to cool.  Also set aside 1/4 cup of chocolate chips, mixed together with 1/2 tablespoon of flour. 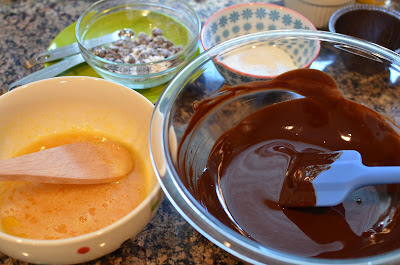 In another bowl, I gently stirred an egg together with about 1/4 cup of sugar and 3/4 teaspoon of vanilla.  Add the chocolate mxture to it and stir together.  Let it cool to room temperature.

Sift together just 2 tablespoons of flour, 1/2 teaspoon of baking powder, and a pinch of salt.  Stir this into the batter with a wooden spoon until incorporated. 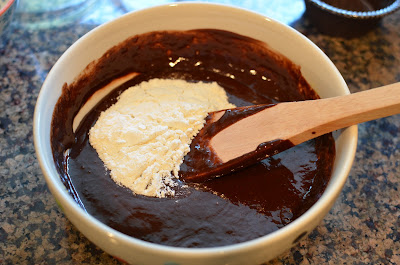 Then add the chocolate chips.  Coating them in a bit of flour prevents them from sinking to the bottom.  And making sure the batter is at room temperature ensures that the chips don't melt before they even head into the oven. 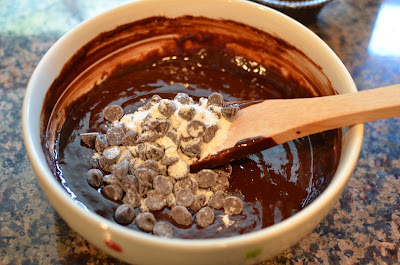 Spoon the luscious batter into your baking dishes and bake in a 350 degree oven.  If you are using the 3 1/2 inch skillets, it should take roughly 25 minutes.  Mine took about 22 minutes or so but please keep an eye on the oven to avoid over baking.  You want some chocolate pudding beneath that crackly and delicious crust!  Again, the brownies are ready when they puff up slightly and a crust has formed on top.  When moved, they should wiggle slightly. 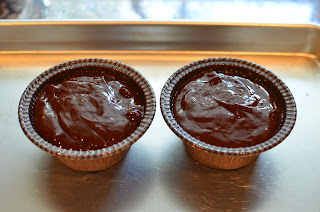 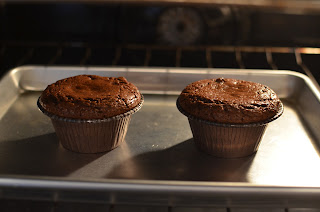 I love how these brownie cakes look (and taste)!  The mixture of hot and cold, chewy crust to soft puddle-like center wrapped in chocolate is very satisfying. 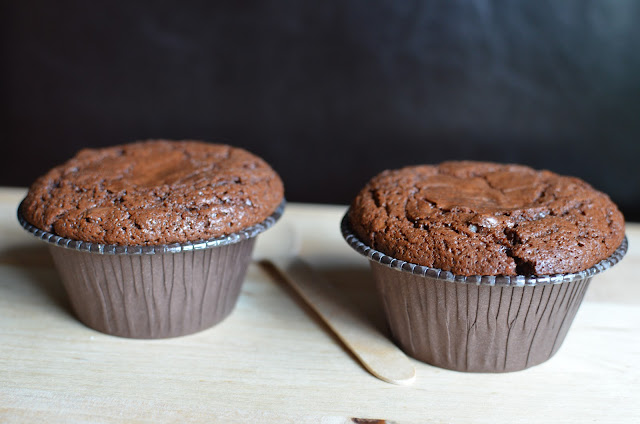 Please add vanilla ice cream.  It's a must!

- Approximately 5 servings (depending on size of your baking dish) -

*Notes: Instead of instant espresso powder, the original recipe uses 2 teaspoons of coffee granules, stirred in with the egg mixture.  It also uses 1/2 cup plus 1 tablespoon of sugar but a scant 1/2 cup is enough for my taste.  Ina uses extra-large eggs in her recipes but I use large ones, and you can go either way here.

Melt butter, chocolates, and instant espresso powder in a heatproof bowl over a pan of just simmering water.  Remove and set aside to cool for about 15 minutes.

In a large bowl, gently stir the eggs, vanilla, and sugar together with a wooden spoon.  Add the chocolate mixture to it and stir together until incorporated.  Let cool to room temperature.

Sift flour, baking powder, and salt together in a small bowl.  Toss 1/2 cup of chocolate chips together with 1 tablespoon of flour (this prevents them from sinking to the bottom).  Stir the dry ingredients into the room-temperature chocolate mixture, followed by the chocolate chips.

Spoon batter into five 3 1/2 inch cast iron skillet and place them onto a baking sheet.  Bake for approximately 25 minutes, or until brownies puff up slightly and a somewhat crackly crust has formed on top.  When lightly moved, they should wiggle slightly.  (You can bake the brownies in baking cups, ramekins, disposable tart/pie pans, a larger cast iron skillet, etc.  Adjust baking time accordingly and look for the same signs of doneness.)  Do not over bake!

Serve directly from the oven with ice cream on top.