As the weather turned seriously chilly recently (although nowadays, anything below 60 degrees equates to "freezing" for me), I've been nesting.  Okay, definitely not nesting in any way relating to having another child but nesting in the sense of wanting to stay home, cook, bake, eat, and repeat.

I've been making some "old-school" favorites lately...baking banana bread, different kinds of cookies, and chocolate cake, in addition to the recent items I've posted.  And as much fun as it can be to try new recipes and talk about them here, it puts a big smile on my face when I go back to those "old" recipes I love and smell/taste those familiar foods.  There have also been plenty of pancake breakfasts on weekend mornings as well as explorations on the savory end.  I've been cooking cauliflower, roasting squash, and learning to make tandoori chicken in the oven to create semi-homemade Indian dinners.  Needless to say, I have been going through a lot of groceries lately for our family of three!﻿
I don't know if you feel the same way but as it turns colder and the days get shorter, I get hungrier and have this desire to stay close to home, particularly in the evening.  I want a cozy dinner at home with my family and a little something sweet to cap off the day (or to brighten up the midday).  Sometimes it means sharing a plate of cookies, other times it may be a slice of cake (cake is a really good thing).  This time in the sweets department, I went ahead and tried something different, something especially for the little one closest to my heart.﻿ 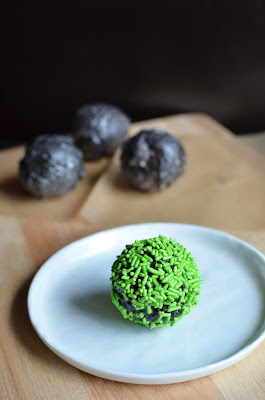 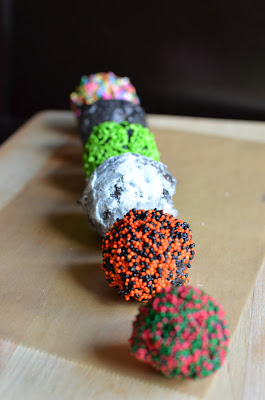 I stepped out of my comfort zone and ﻿made a batch of "munchkins" for my munchkin, if you will.  I saw this recipe for chocolate cake donut holes (shaped like donut holes or what we call "munchkins" but they're really little fried chocolate cakes) on this beautiful blog and I thought I'd try it for the little guy, who, like most kids, loves his (occasional) donuts and munchkins/donut holes from Duncan Donuts.  And the thing is, my little guy always goes for the chocolate ones when it comes to those munchkins so these are right up his alley. ﻿
Now, the good news is my little munchkin was excited about this endeavor and he really liked these cake/donut holes!  I was surprised, but he really enjoyed them.  Taste wise, he preferred the simple glazed ones (that's his usual munchkin preference though he requested a mixture of both plain glazed and sprinkles for this homemade experiment) but he was also obviously drawn to some of the "special" ones with sprinkles - particularly, the green one since that's one of his favorite colors.  And I say I was "surprised" he liked them so much because for me, while this was an interesting project, it's not something I would make again.  I found the cake batter and finished cake too dry (I had to add extra buttermilk in the end to make the dough bind together better) and dense, and the flavor too mild.

And with few exceptions, I rarely make fry food at home and these chocolate cake donut holes are fried.  I seriously can't believe I basically fried chocolate cake!  There are obviously plenty of reasons against frying and I agree, which is why I rarely do it.  I don't enjoy the "fragrance" that lingers in the air after frying but I have to say the actual smell of chocolate frying is pretty good!  And frying these little bits of cake cake gives the crust a nice crisp texture and fried at the right temperature, with the help of a thermometer, they do not absorb much oil.﻿﻿﻿﻿
A simple glaze is a must for these.  The cake balls need the added moisture and sweetness.  A subsequent roll in sprinkles is not be mandatory but I highly recommend it.  Aesthetics is important in this instance and these should be fun and not taken too seriously.  They clearly won't put Duncan Donuts out of business but it put a smile on a 7-year old boy's face.﻿
Now, let me tell you...this whole exercise has got me craving beignets.  "Luckily," the little one is not a fan of those or I might have an excuse to go there.  He's got this thing against a lot of warm/hot foods (a clear exception being a warm molten cake but the ice cream on top mitigates that).  But my husband and I sure wouldn't mind a few of those warm doughy donuts covered in powdered sugar, preferably served with a bowl of warm chocolate sauce for dipping.  But I think I'll go to a restaurant and let someone else do the frying...

The recipe for these chocolate cake donut holes can be found at the blog, How Sweet It Is, which I discovered just recently.  I love her gorgeous photography and am amazed by how often she updates her site!


A few highlights from my experience with this recipe:

- I divided the recipe in half, which should yield about 18 donut holes as per the recipe.  Don't ask me why but I made mine too big and I definitely recommend going small.  They puff up during frying and given the dense texture, smaller bites with more glaze to cake ratio would be better. 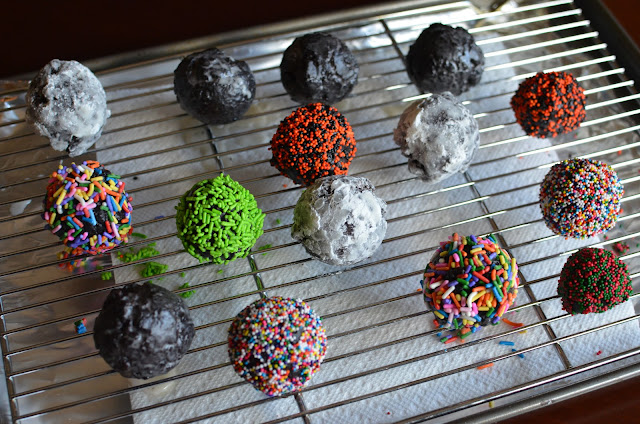 - The cake batter is a simple wet and dry ingredient mix.  My dough was too dry and I had to add about another tablespoon of buttermilk in the end to get it to come together smoothly.  I don't think dividing the recipe in half had anything to do with it.  I did notice that the original Martha Stewart recipe that inspired this had caramel candy tucked inside the cake balls so you end up with a liquid caramel filling.  I think that could explain the dense texture for these cake balls, as it would make more sense with a liquid filling.  I think this recipe as is, without the filling, needs more butter and buttermilk for added moisture. 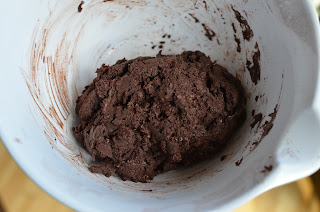 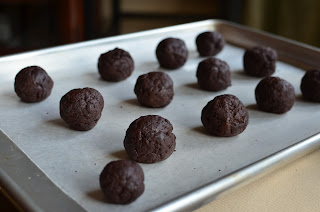 - I highly recommend using a candy thermometer to check the temperature of your oil when frying, particularly if you are like me, and don't do it very often.  Try and maintain the oil at 350 degrees so they fry up without absorbing too much oil. 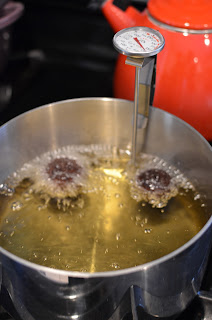 - The glaze is a simple mix of powdered sugar and milk, with a touch of vanilla extract.  It is a must with these chocolate cake donut holes because they need the additional sweetness and a bit of moisture.  Use the recipe as a guideline and adjust the ratio of powder sugar and milk just so you get a glaze that's fluid enough to coat but not so thin that it wouldn't give it enough coverage.  I also rolled a few in powdered sugar instead of the glaze and I prefer the glaze since it sets and drys and is easier to handle. 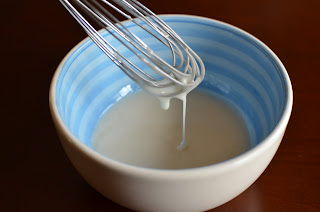 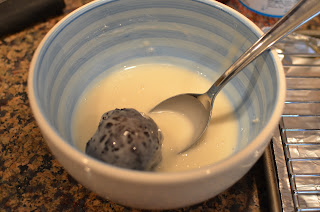 - A word on sprinkles.  Go for it here!  I love using holiday sprinkles or special colors as an easy way to get seasonal or celebrate something.  I bought a jar of green sprinkles recently because it's one of my son's favorite colors.  I rolled one of the cake balls in it and it became highly coveted one.  I found the nonpareil sprinkles easiest to work with.  They just adhered right to the donut holes. 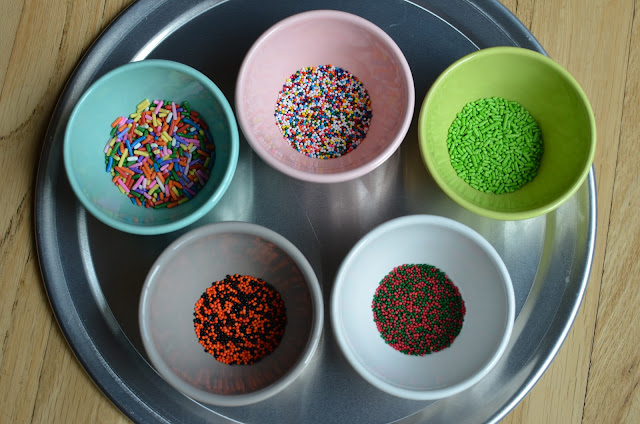 Presentation wise, I think these chocolate cake donut holes are really cute.  I think they would've been better if I'd made them a bit smaller.  But frankly, though, I wish they'd tasted better since the inside really was too dry... 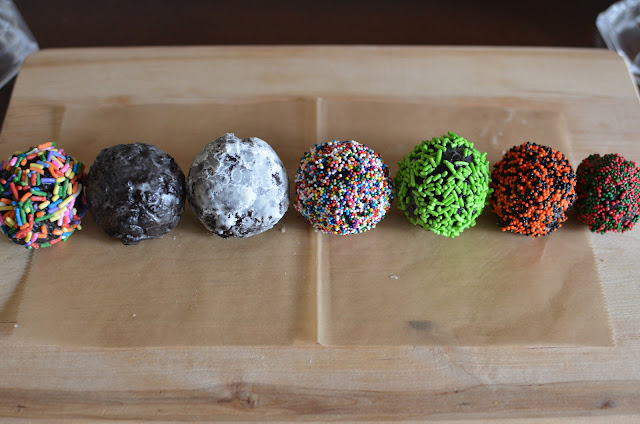 The little one was pretty happy with them (he wouldn't let me throw out the leftovers!) so it was worth the experiment.  Regardless, I think I'll be making a trip to my local Duncan Dunuts one day soon for a little taste of the real thing.