Are you a fan of Pinterest?  I love checking out the "Food & Drink" category.  There are amazing photos of all kinds of food and sweets (not to mention cool tips and tricks) to ogle over.  Plus, it's nice to know there are so many people like me, who are obsessed with food!  I've actually tried a couple of recipes I found via Pinterest and this one came about the same way. 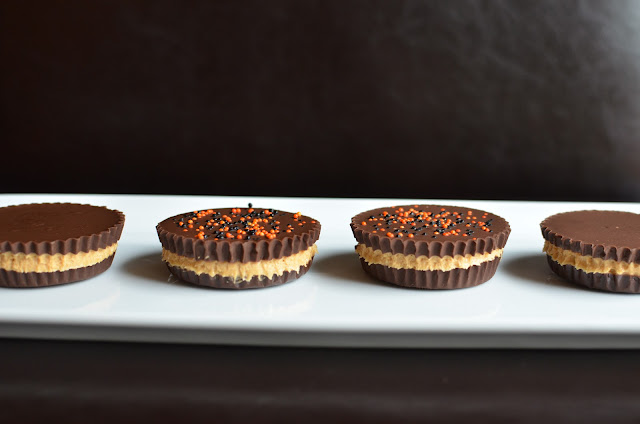 Homemade peanut butter cups caught my attention partly because I thought my little one would enjoy it.  With Halloween around the corner, I also can't help but have candy bars on my mind, especially since they're everywhere right now.  And once in a while, I just get a hankering to try making homemade copies of store bought things - even though it usually ends up reminding me there's a good reason why the item is best store bought.

With Halloween in mind, I sprinkled some black and orange nonpareils over some of my peanut butter cups.  Why not add different kind of sprinkles for whatever holiday you're celebrating.  Kids are big fans of sprinkles and they were the first of my little batch to go.  But I'm not suggesting you make these to pass out on Halloween...I actually don't think that would be practical (please read on)... 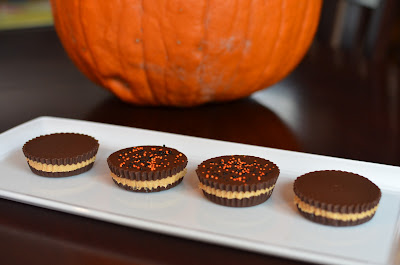 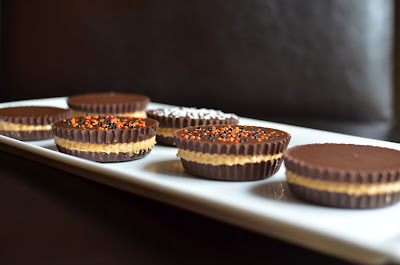 To make these, you layer chocolate, peanut butter whipped with a bit of butter and confectioners' sugar, then chocolate again, in some cupcake liners.  Freeze each layer for about 15 minutes and before you know it, unwrap your liners and you have homemade peanut butter cups.  It's not exactly Reese's Pieces but I really like being able to see the layers of chocolate and peanut butter, and I think it's a fun little project to do if you're into making homemade renditions of store bought candy.

For the chocolate, I used a mix of (mostly) semisweet and milk chocolate.  You could use what you prefer; milk chocolate would be sweeter and should give you a softer texture than dark.  I used standard cupcake size wrappers to make my peanut butter cups.  You could go mini, using a mini muffin tin and liners.  That would be a little more labor intensive but looking back now, I actually think minis would've been a better idea.  Since these tend to melt (you need to store them in the refrigerator, the chocolate is not tempered) and be a bit messy to eat, it'd be a big plus to be able to pop one whole piece into your mouth! 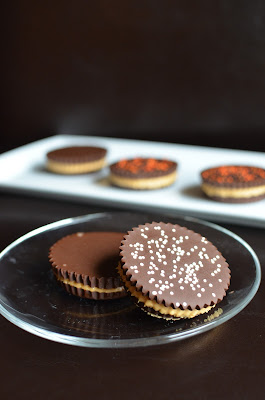 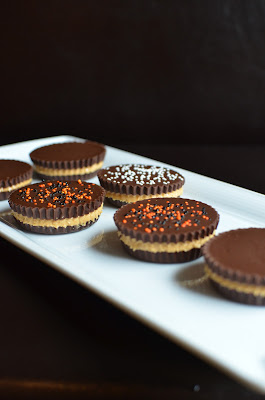 Overall, this was a fun little project.  The plus side is you made very tasty homemade peanut butter cups!  The downside is you can't really transport these since they're a little messy to handle.  They start sweating and melting on your fingers once taken out of the refrigerator - and you do need to let them rest a few minutes at room temperature before eating so that the chocolate layers aren't quite so hard (those chocolate layers are purely melted chocolate, with no butter or corn syrup to soften them).  In contrast, the peanut butter layer is softer than the chocolate and tends to squish out when you bite into it.

To contain the mess a little, I think it's a good idea to serve each one of these in a cupcake wrapper so that there's something to hold onto.  But hey, store bought candy can be messy too, right? 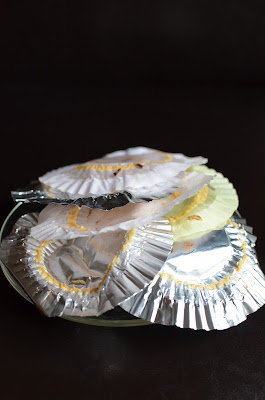 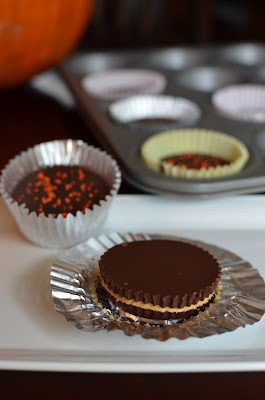 The kids I served these to needed a lot of napkins but they were very happy (which makes me happy)!  Now if only there was a recipe for homemade Kit Kat bars...

The recipe (very barely adapted) for these homemade peanut butter cups comes from Fifteen Spatulas, a very interesting site I found thanks to Pinterest.


I only wanted to make a small batch to give this project a spin.  I ended up with 6 standard cupcake/muffin size peanut butter cups.  Again, minis are something to consider.

I started with 7 ounces of chocolate.  I used 4.5 ounces of semisweet chocolate and 2.5 ounces of milk chocolate.  No particular reason for that formula other than wanting to throw a little bit of milk chocolate sweetness into the mix even though I generally prefer dark chocolate.  Melt half of it at a time over a double boiler (the microwave, if you want to live dangerously) and divide it into 6 cupcake liners.  Drop/bang the pan down onto the counter so that it evens out and spreads evenly (that part is very satisfying). 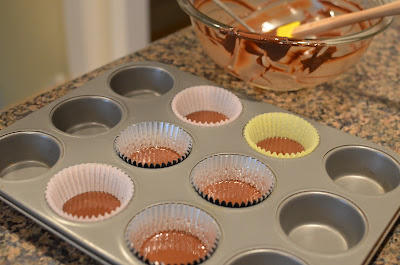 Freeze the muffin tin for 15 minutes.  In the meantime, beat/whisk 1/4 cup of creamy peanut butter with 1 tablespoon of softened butter and 3 tablespoons or so of confectioners' sugar (you can taste and adjust the sugar to your liking - baring in mind what type of chocolate you are using to pair it with).  Whisk until the peanut butter mixture is light, fluffy, and smooth. 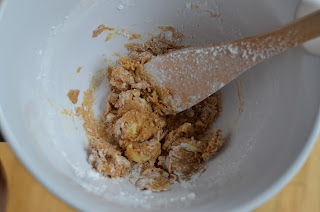 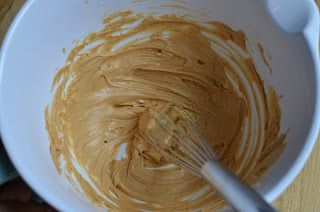 Dallop the peanut butter mixture onto the chocolate layer, dividing among the 6 cupcake liners.  Again, bang the pan against the counter several times to help it spread evenly.  Return the pan to the freezer for 15 minutes. 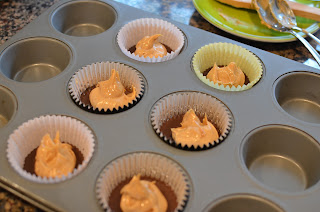 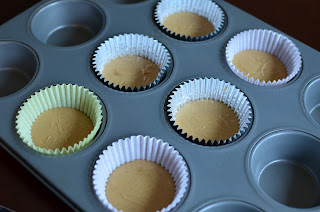 Melt the remaining half of the chocolate.  Remove the pan from the freezer and divide the chocolate among the cups.  Bang the pan to flatten the chocolate after filling each cup since it will set quicker on top of the frozen peanut butter layer.  Repeat with the rest of the cups.  Quickly add sprinkle over the top, if using. 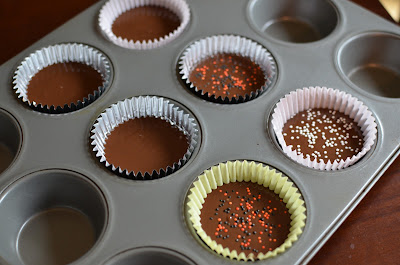 Return it to the freezer one last time for 15 more minutes to set.  Then, I recommend placing it in the refrigerator for a bit before simply peeling away the wrappers.  I didn't wait and found mine a little too ready to melt.  You could also store them in the refrigerator with the liners and remove it when you take it out of the fridge just before eating.  I used both foil and regular paper liners; both worked equally well. 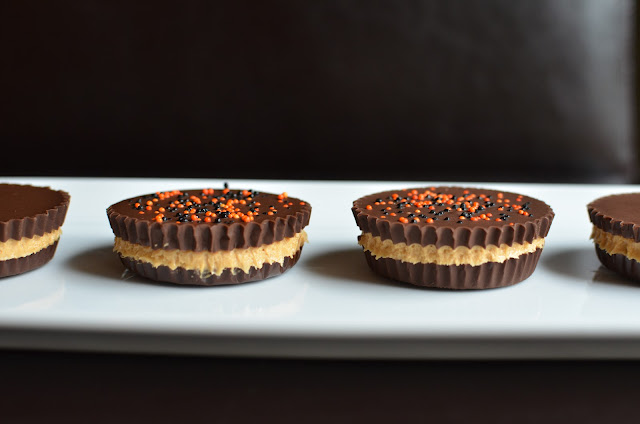 Keep your homemade peanut butter cups in the refrigerator.  Before eating, set it out at room temperature for a bit (maybe 10 minutes or so but depending on the temperature of the room).  Otherwise, you will find the chocolate layers very hard and the peanut butter layer squishing out since it's much softer.  Serve each with a cupcake wrapper to keep the mess in check.

- Makes 6 standard muffin size peanut butter cups (I also recommend making them in mini muffin cups, which should yield up to 18) -


* Purely in terms of texture, bear in mind that milk chocolate has a softer texture that should blend better with the softer peanut butter layer when eating.


Line 6 regular size muffin cups with paper liners.  Set half of the chocolate in a heatproof bowl set over a pan of just simmering water.  Stir until melted.


Spoon melted chocolate and divide among the muffin cups.  Bang/drop the pan on the countertop several times to evenly distribute the chocolate.  Set pan in the freezer for 15 minutes.

Remove muffin tin from the freezer and divide the peanut butter mixture over each.  Bang the pan against the counter to spread evenly.  Return pan to the freezer for 15 minutes.

Melt the remaining half of the chocolate.  Remove pan from the freezer and distribute chocolate over each, banging the pan after filling each muffin cup since it may harden quickly on the frozen surface.  Quickly add sprinkle or toppings, if using.  Freeze for another 15 minutes until set.

I highly suggest serving each with a cupcake wrapper and napkins.  They do melt in your hands and tend be messy (but tasty).