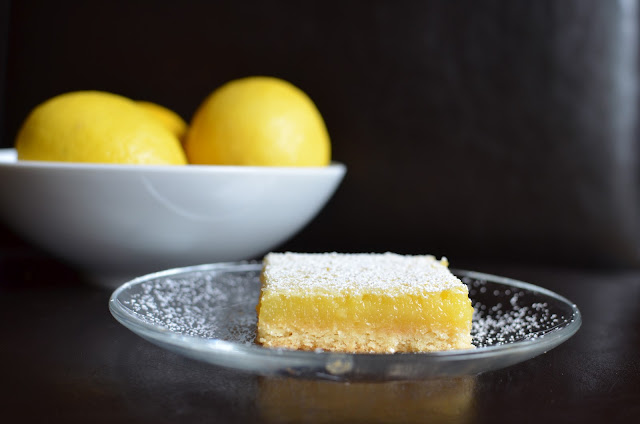 I've had (and love) lemon tarts but not a basic lemon bar with shortbread crust and lemon curd topping that I can pick up with my hands and devour.  Although I have to ask...is it still lemon curd when there's no butter and you add flour to it?

I've wanted to make lemon bars for a while since I love lemon but I was really motivated to bake a batch after seeing a recipe for a lighter version in Cooking Light magazine. 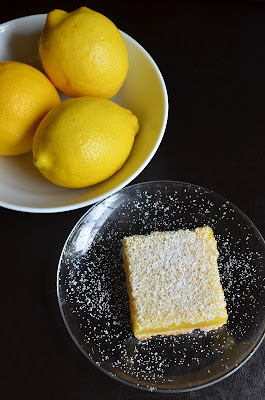 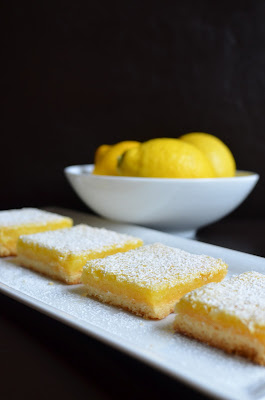 But to make a long story short, I actually did not make the Cooking Light version but went with the well-known Ina Garten recipe instead, with some help from Smitten Kitchen.  Although I love the idea of lightening up these rich treats (pine nuts in the crust sounded good to me), how can I make a lighter version before making/tasting the "real" thing first?  So as a compromise, I just made a smaller version of the real thing.

And I think this is the real deal...rich, buttery (very fragrant) shortbread crust and tangy yet sweet lemon filling.  I'm glad I didn't slim down the lemon layer.  I actually figured I'd like a bit more lemon to shortbread ratio, and I was right. 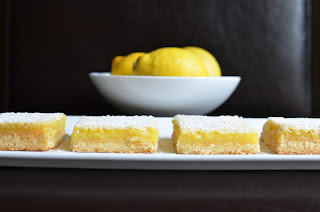 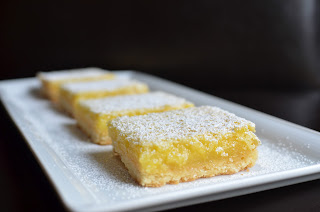 I didn't know making lemon bars could be a bit of a high wire act though!  I thought I came a little too close to over baking mine.  Who knew you could over bake lemon bars!  I was worried about under baking - you read about fillings not setting and how difficult they are to cut.  And of course, since I divided the recipe in half and baked them in a 9-inch square pan instead of a 9x13 inch pan, the timing was thrown off.  And boy, I had lots of ugly air bubbles on top of my lemon bars - why hasn't anyone talked about that?

Luckily, I found that after cutting away the dried sides of my lemon bar, the center was still soft and, almost surprisingly at this point (since I'd lost confidence), very tasty!  Maybe it just goes to show you do need to bake lemon bars a bit longer than you think.  Next time, though, I'll play it safe and keep a closer eye on the oven.  I think the idea is to remove them about 5 minutes after the filling sets; directions are not very precise, for sure.

And also luckily, a generous dusting of powdered sugar does a good job of hiding those unsightly air bubbles.  The downside is that this almost-mandatory powdered sugar topping melts once covered so it's not ideal to travel with them (another point against the bake sale idea - particular during humid weather) or if you want to package them as a gift. 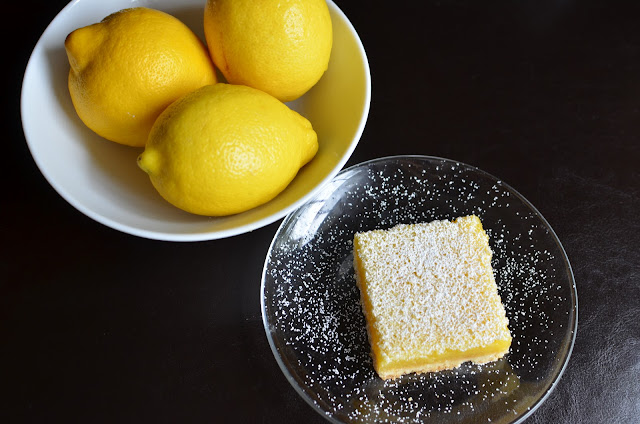 Now I know what the big whoop is about lemon bars.  They're a great balance between sweet and tangy, with that fresh lemon cutting through the rich buttery flavor of the crust.  And is it me or is there something a little extra special about bar desserts?  Casual yet special.  Next time you're at a bake sale, see if you find lemon bars.  They may be geared more towards adult rather than young palates but look at it this way, we all become adults eventually...

Making lemon bars is just a matter of making the shortbread crust then literally whipping together the lemon filling.  It's all pretty easy but I think the trick is to keep an eye on the oven and try not to under or over bake the filling.


I used Ina Garten's recipe, very slightly adapted with help from Smitten Kitchen, which was to mainly reduce the sugar a bit.  I think they're plenty sweet enough even with the reduced amount.  I divided the recipe in half and baked it in a 9-inch square pan.  I used 9" instead of an 8" inch pan since I wanted the bars a bit thinner.  But I didn't follow Deb from Smitten Kitchen's suggested option of making a thinner lemon layer.  I like a bit more lemon to shortbread crust.

First, to grease or not to grease?  The pan, that is.  Ina's recipe doesn't ask you to but I took the extreme safe route of not only greasing but also lining the pan with 2 pieces of parchment paper (buttering the paper as well), leaving an overhang I used to lift the bar out.  I found doing so had a negative side effect though.  A lot of butter around the edges makes the sides darken and almost burn by the time you're done baking.  As a result, I recommend trimming the sides.  It's not a big issue but I leave you to decide if it's worth it.  You might want to just lightly grease the pan and leave it at that.

The crust is really quick and easy to put together.  Just cream the butter and sugar together until thoroughly mixed together.  Then mix in the flour and a pinch of salt.  The hole thing goes into your baking pan. 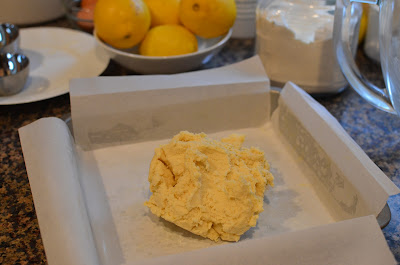 Lightly dust your hands with flour and press the dough out and around the pan.  It's a cinch to do since the dough is super soft and buttery.  The recipe says to build a 1/2 inch edge on all sides but I'm not sure why this is necessary. 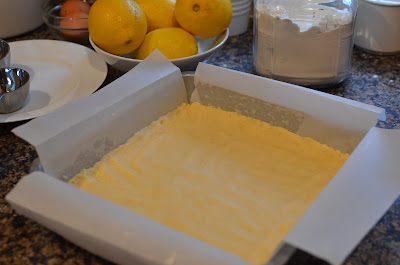 Before baking, place the pan into the refrigerator to chill for about 15 minutes.  Then bake at 350 degrees for roughly 20 minutes until lightly browned.  Let cool and work on the lemon filling. 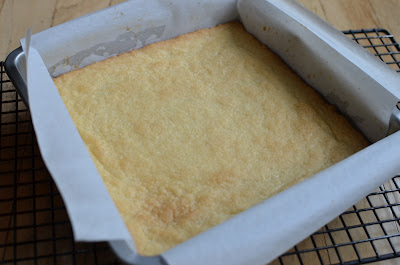 For my lemon filling, I used 1/2 cup of fresh lemon juice.  It could take anywhere between 2 large juicy lemons to 4 smaller ones. 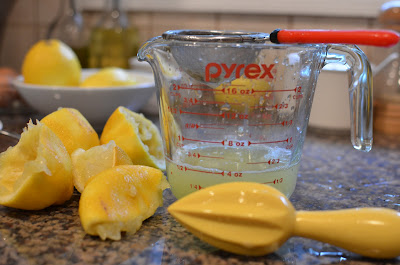 For my half recipe, I used 1 1/4 cups sugar.  Zest 2 lemons directly into the sugar and I like to rub the two together to release the lemon's essential oils and flavor. 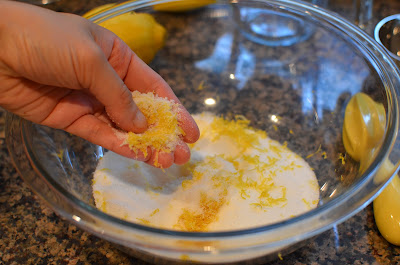 Is it possible to whisk a mixture gently enough not to cause air bubbles?  I might have been more energetic than I realized because I had a lot of air bubbles on the surface of my filling.  Add eggs, lemon juice, and flour to the sugar mixture and try to be a little less enthusiastic when whisking everything together (though I think some air bubbles can't be avoided). 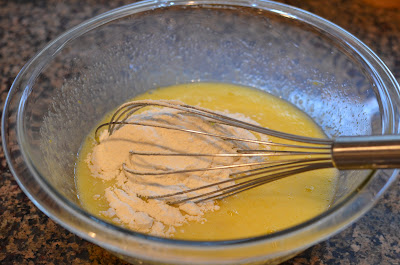 Pour the mixture onto the crust and return to the oven. 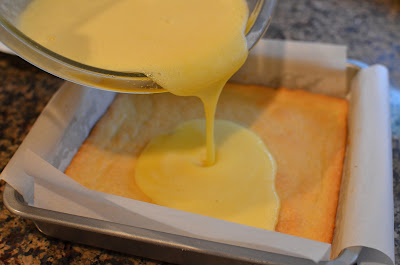 This is the point where you want to be vigilant.  I've learned it's important to keep a close eye on your lemon bars when they're in the oven, especially if you mess with the recipe and use a different size pan like I did.  Unfortunately, it's hard to pinpoint the exact baking time.  According to Smitten Kitchen, they should be removed from the oven about 5 minutes after they've just set.  It's obviously hard to be precise but start checking early.  I baked my 9-inch pan for close to 30 minutes.  Next time, I'd begin checking by the 20 minute mark just in case. 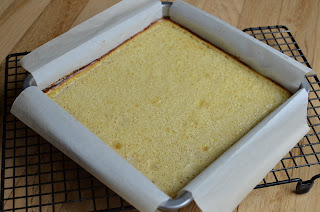 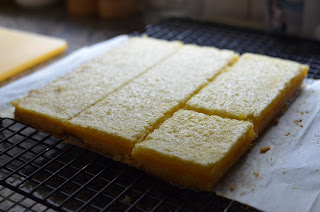 The edges of my lemon bars were dark and dry so I trimmed it away.  I had no problems slicing the lemon bars.  I was so happy to see lovely yellow, moist lemon filling as I sliced! 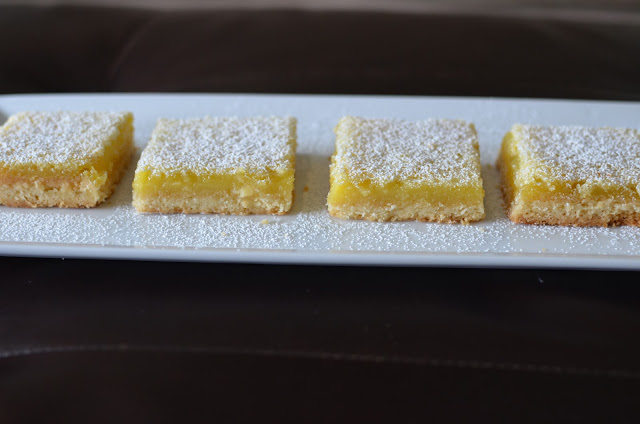 - For one 9-inch square pan (this is the portion I prefer but double the recipe, as intended, to bake in a 9 by 13 inch baking pan) -

To make the crust, cream butter and sugar together in the bowl of a stand mixer fitted with the paddle attachment.  Combine flour and salt together.  On low-speed, gradually add the dry ingredients until just combined.  Press the dough together into a rough ball with a rubber spatula and turn the dough out onto the baking pan.  Lightly flour your hands and press the dough evenly around the pan, building up a 1/2 inch edge on all sides.  Chill the pan in the refrigerator for about 15 minutes.

Bake crust for 15-20 minutes, until lightly browned.  Let cool on a wire rack.  Leave the oven on.

For the lemon layer, place the sugar into a large bowl and add lemon zest.  Rub together until slightly moistened (by the oils in the lemon zest).  Gently whisk in eggs and lemon juice, followed by the flour.  Pour over the crust and return to the oven.  Bake for roughly 25 to 30 minutes, or about five minutes beyond the point where filling is just set.  (Begin checking around the 20 minute mark).  (Also, if doubling the recipe and baking in a 9 by 13 inch pan, it should take around 30-35 minutes.)

Remove from the oven and let cool completely before slicing.  If necessary, trim away any darkened, dryer edges of the lemon bars and then cut into desired size and shape.  Dust the tops with confectioners' sugar.  Note that the confectioners' sugar will melt once covered so plan to do so just before serving.  If storing lemon bars in the refrigerator, let them come fully to room temperature before dusting.