For my little ninja

This is the time of year when I find myself making - or attempting to make -things that I normally wouldn't.  Last year, there were owl cupcakes (which are rather adorable, actually).  The year before that, I made spider cupcakes which involved some legwork in tracking down licorice wheels.  This year, I've played around with peanut butter cups and donut holes and now, we have these...﻿
I don't generally do cute - or crafty even - because I don't have the patience for it and because I prefer old-fashioned chocolate cake with no frills over playing with frosting.  But for whatever reason - come holiday time particularly - I start seeing cute ideas and something inevitably catches my eye and I have to go there... 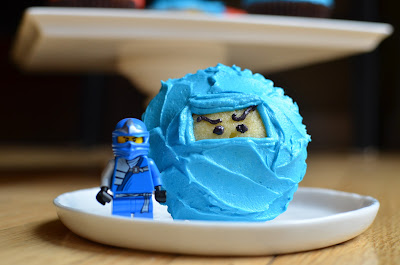 This time, I've gone Ninja!  If you have a 7 year old (or thereabouts), you might know what I'm talking about.  Ninjago is big.  It's all about Ninjago - the legos, the show, the corresponding spinners and cards.  Not surprisingly, my little guy will be a ninja this Halloween and I expect to see plenty of 2nd grade ninjas parading around next week (assuming Halloween is not a complete wash-out due to the storm).﻿
I hadn't planned on doing anything "special" for the occasion because, frankly, Halloween is not my favorite holiday (I'm really looking foward to Christmas though).  But when I stumbled upon pictures of ninja cupcakes online, I thought they would amuse my rapidly growing little guy...I wouldn't go so far as to say impress him because he doesn't impress easily.

I had a lot of reservations about making these.  It's one of those frosting projects that I don't exactly adore or have a lot of experience with so I wasn't sure I'd be able to execute it.  The cupcakes I saw online were done using store-bought frosting and I wanted to stay homemade as much as possible but thought it might be difficult to get homemade frosting colors bright enough.  In the end, I decided not to let perfection be the enemy of the good.  Happily, they actually turned out to be fairly easy and I was really happy with the result!  Best yet, it put a smile on my little ninja's face.  Another added bonus, these cupcakes actually tasted good! 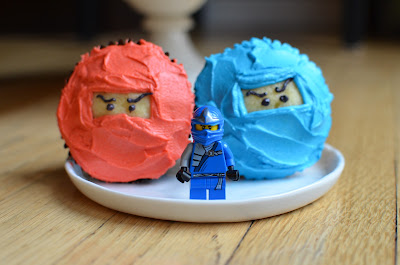 The ninjas of Ninjago (my son would be able to rattle their names off for you) each sport a different color: red, blue, green, white, and black.  To keep things simple, I stuck with red and blue since they are my son's top  two favorites (although this changes from day to day).  I am really grateful for Martha Stewart's recipes, which rarely steers me wrong and didn't here.  I made these using Martha's yellow buttermilk cupcake and buttercream frosting recipes.  I didn't need much frosting on these cupcakes - one stick of butter was more than enough to decorate all dozen (I even threw some extra frosting out).  And the cake itself was tender and flavorful, a big improvement from my last yellow cake experiment. 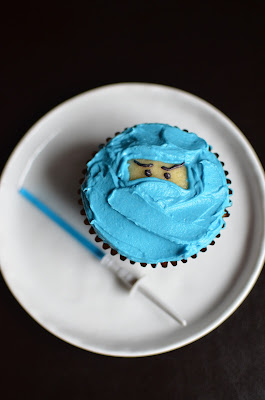 I got a real kick out of seeing smiles crop up on the faces of the little ones that we share these cupcakes with.  But most importantly, this was for my special little ninja.  For him, I say "may you unlock your true potential..." (Ninjago people will know what I'm talking about) 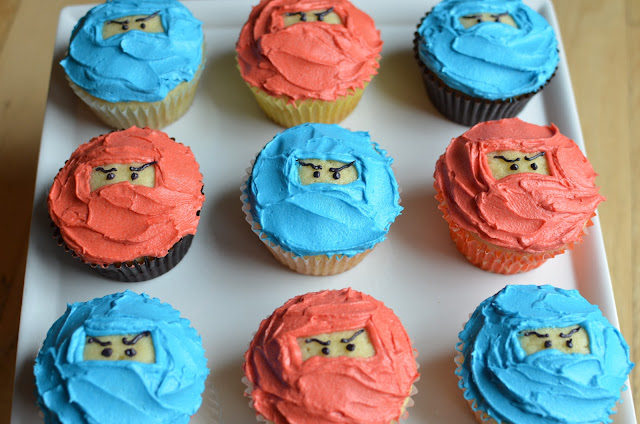 
Both the cupcake and frosting recipes (at the bottom) come from Martha Stewart's Cupcakes.

I made yellow buttermilk cupcakes.  You want to use yellow cake to mimic the lego Ninjago's face color.  Not many surprises when it comes to this recipe, which I divided (from 36 cupcakes) to make one dozen.  A combination of mostly cake flour as well as some all-purpose flour keep them light yet sturdy for handling, while buttermilk makes them tender and adds a nice flavor.  I only got to eat about two bites but I thought it was moist, flavorful, and light - yet sturdy enough that it stays together and doesn't cause a huge mess when eating.

I recommend thoroughness in beating the butter with the sugar in the first step to fully aerate the batter. 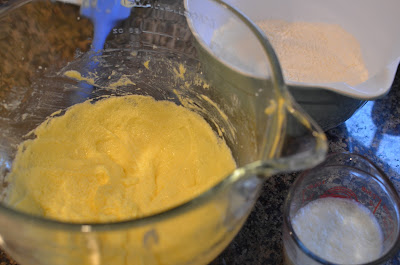 The dry ingredients are added in 3 batches, alternating with 2 batches of buttermilk, ending with dry.  Take time to scrape the bowl and beat the mixture together properly.  I like the extra egg yolk in the batter; I think it adds not only color but a little needed flavor to yellow cake. 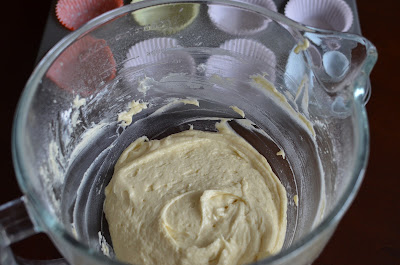 The batter is smooth and airy (not only from the mixing but a good dose of leavening in the recipe).  I divided it into 12 cups, filled about 3/4 way up.  It bakes up and rises quite a bit. 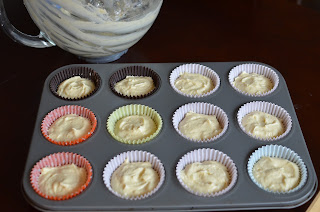 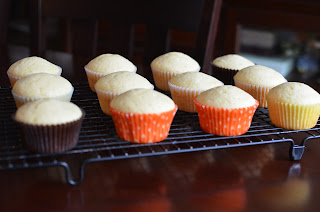 
I used a simple vanilla buttercream frosting for these cupcakes.  I've always been a little "scared" of plain buttercream for various reasons but I think I might have gotten over now!  This frosting turned out fluffy and smooth.  It didn't need any milk and the result had a clean white color to it, a great base for tinting with color like I needed to do in this case.

I used 1 stick of butter, 1 1/3 cups sifted confectioners' sugar, and a little vanilla extract to make this buttercream.  It may look like very little but was more than enough to decorate the dozen cupcakes (I didn't want too thick an icing layer).  The trick is to aerate the frosting well by mixing it thoroughly and adding the sugar in several installments to get it very pale and fluffy. 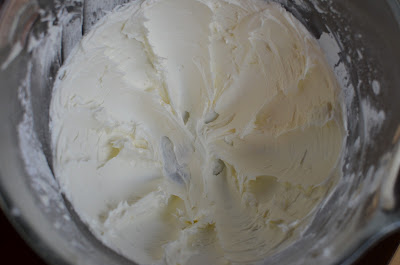 To tint the frosting, I used gel paste food coloring in red, blue, and black.  It's not really relevant in this case but I've learned it's a good idea to set a little plain frosting aside if you go overboard and need to lighten the color.  Another thing I also learned is that the tinted buttercream tends to deepen in color as it sits!  The pictures in this post show the cupcakes freshly decorated; after a couple of hours, they were a bit darker in color. 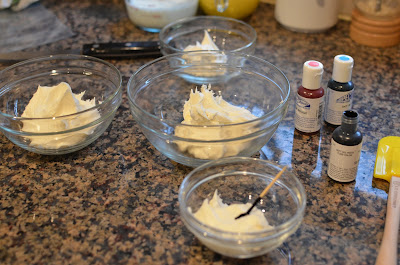 I was pretty casual about the coloring since I needed dark, bright colors for my cupcakes but, in general, start with a drop or two and stir, adding more as needed. 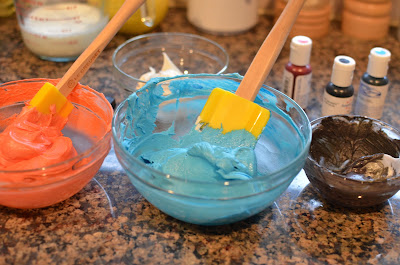 Putting the "Ninjago" cupcakes together


Like the owl cupcakes, once you see these, I think it's fairly easy to figure out how to get the look.  I simply put a little bit of each frosting into little baggies and snipped off the ends.  I used this to first draw a border for where the eyes go and to pipe on the eyes and eyebrows. 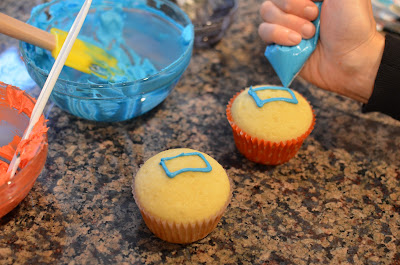 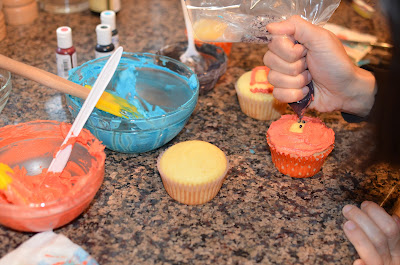 Now that I'm done and it turned out well, I'm thinking maybe I should have attempted other colors!  I also think they would look and taste great with a dark, shiny, fudgy chocolate frosting to mimic the black ninja.  I am always thinking chocolate! 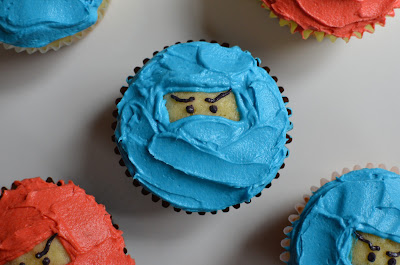 I wish everyone a fun and safe Halloween! 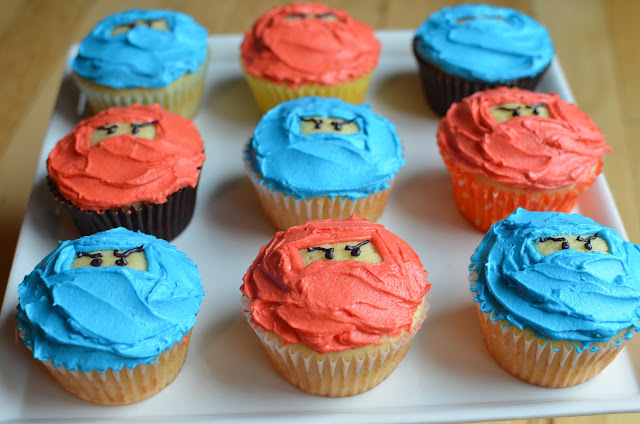 *The only change I've made to the recipe is to divide it down to make one dozen instead of 36 cupcakes as per the original recipe.  Note the use of 1 2/3 egg; I know this sounds crazy and you could try using 2 eggs but I lightly beat the egg and eyeball two-thirds into the batter.

Sift the flours, baking soda, baking powder, and salt into a bowl.

Cream butter and sugar together on medium-high speed in the bowl of a stand mixer until pale and fluffy.  Reduce speed to medium and add one whole egg, beating until incorporated.  Add the remaining portion of the second egg and mix, scraping down the sides and bottom of the bowl, as needed.  Add egg yolk and beat until completely combined.  Reduce speed to low.  Add dry ingredients in three installments, alternating with two additions of buttermilk, ending with the dry ingredients.  Beat well after each.  Beat in vanilla extract.

Divide batter evenly among the 12 cups.  They should be about 3/4 full.  Bake, rotating halfway through, until cupcakes spring back when lightly touched and a cake tester inserted into the centers comes out clean, roughly 15-20 minutes.

Remove tin from the oven and let cool on a wire rack for 10 minutes before turning out to cool completely.

Cupcakes can be stored overnight at room temperature or frozen up to 2 months, in an airtight container.

* I reduced this recipe down to one-third from the original 4 cups (which is a lot of frosting and I think a little goes a long way on cupcakes despite how much children tend to love it).

Cream the butter on medium-high speed for about 2 minutes, until pale and creamy.

On medium speed, add the confectioners' sugar, roughly 1/4 cup at a time or in 6 installments, beating well after each addition and scraping the sides and bottom of the bowl as needed.  After every two additions, raise the speed to high and beat for about 10 seconds to aerate the frosting, then return it to medium speed.  The frosting should look very pale and fluffy.

Add vanilla extract and beat until frosting is very smooth.  You can now tint the frosting with color (I use gel paste), if desired.

The frosting can be refrigerated up to 10 days in an airtight container but you'll need to bring it to room temperature and beat on low speed until smooth before using.