I tend to hoard my favorite almond paste and only reluctantly pop open a can when I think I have a really worthwhile recipe to use it in.  Two of my favorite ways to use almond paste is in those delectable Italian tri-color cookies and to make almond macaroons.  I love the stuff but it's not cheap and I want to use it for a good cause where it's worth every ounce.  This almond cake I recently made qualifies.  It is so moist and fragrant, rich with almond flavor thanks to that paste. 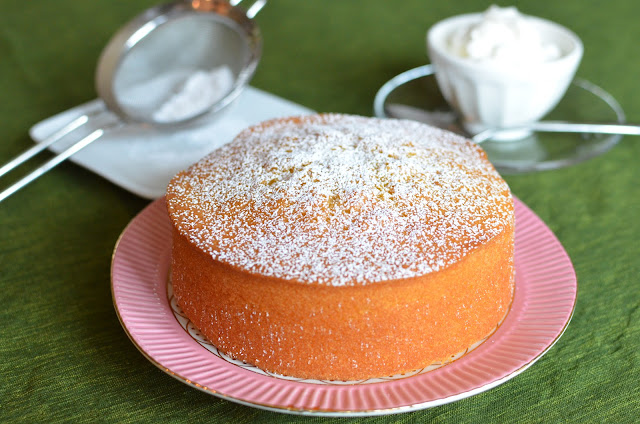 I was drawn to this recipe because I love almonds and, well, cake.  This is a somewhat rustic, "everyday", kind of cake, which I can never get enough of.  It's simple, one-layered, with no need for frosting.  You can call it a "finger-cake," one you simply eat with your hands or consider it a tea cake and enjoy it a bit more delicately in the afternoon along with a cup of tea (that's how I prefer it).  I made a little whipped cream to go with this almond cake but I don't think it needs it since it's plenty moist on its own.  Suggested accompaniments also include some fresh fruit or ice cream.  Ice cream goes with everything. 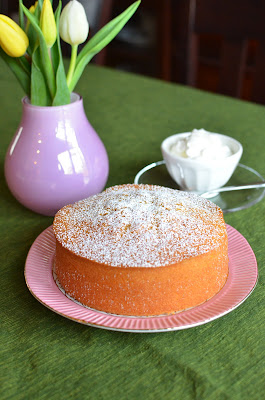 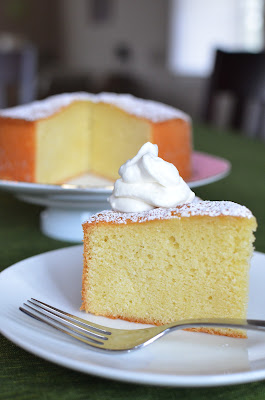 This cake is one of David Lebovitz's favorite; I love his recipes and if this is a favorite of his, I knew it would be good.  And I thought it was excellent.  I made a slight modification to the recipe by reducing the amount of butter in the recipe because I really wanted the almond flavor to shine and I was trying to cut down on the fat a little bit.  With all the baking I've been doing regularly, I also decided to make a mini, 6-inch, test version.  This way, I also have more almond paste left.  I told you I hoard that stuff! 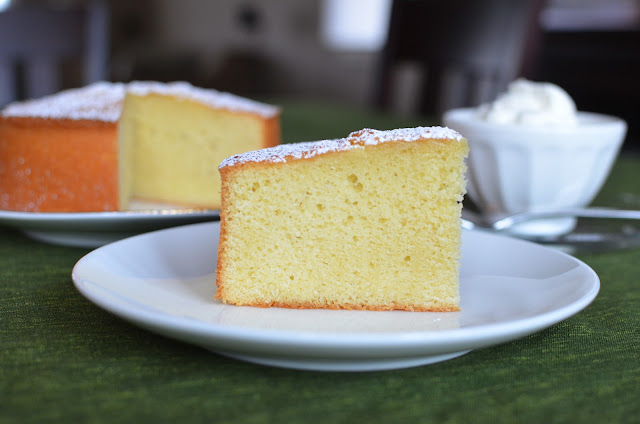 Luckily, the cake turned out terrifically moist.  I was a little worried that reducing the amount of butter (I used 6 tablespoons as opposed to 8 for half the recipe) might be risky.  David mentioned that the recipe had been re-worked and already contained less butter than the original, but 2 sticks of butter (for a full size cake) is still quite a bit for an everyday cake.  I saw a couple of comments on his website from people who had dialed the butter done further and since there was so much talk about the cake being so moist, I had a feeling it would work.

The fun part about making this rich almond butter cake is I got to make up the batter in a food processor, a first for me.  As much as I dislike having to wash that piece of equipment, it's neat to do things a little differently.  The cake rises pretty significantly while baking but luckily did not overflow.  It has a tight crumb and the best way to describe it is moist, and full of almond flavor.  And with the almond paste, it's far heartier and denser than say, a light chiffon cake.  It's buttery, even with the little bit less I used, and rich.  I would say it's almost like an almond pound cake.  I would love to bake it in a loaf pan next time but a round cake always seems a bit more special. 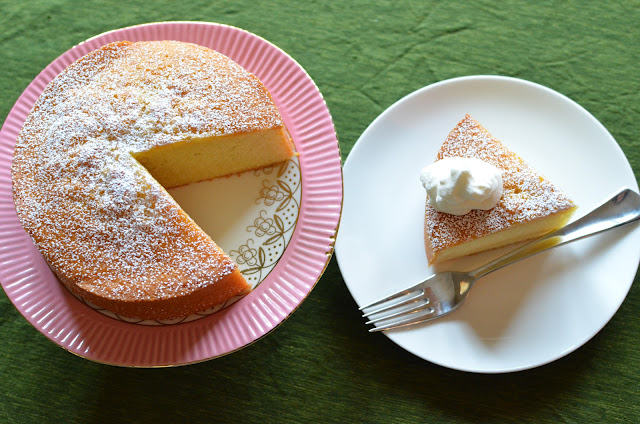 All in all, this is one great everyday cake.  I'm glad I cracked open that almond paste.

To start on this almond cake, grab your food processor because the batter comes together very quickly in it.  If you do not have one, you could use the stand mixer and paddle attachment to break down the almond paste (much like with the tri-color cookies) as thoroughly as possible first.  The food processor is ideal in this situation because it efficiently breaks up the almond paste so that there are no lumps and the paste is spread evenly throughout.

This recipe (below) is intended for a 9 or 10-inch cake.  You need a cake pan with a minimum 2-inch height since the batter does raise pretty significantly in the oven.  I went with half a recipe and made a small 6 inch cake.  As I mentioned earlier, I think this is a great recipe to bake into a loaf pan as well.

First, break down the almond paste by grinding it with sugar and some flour in the food processor until there are no lumps. 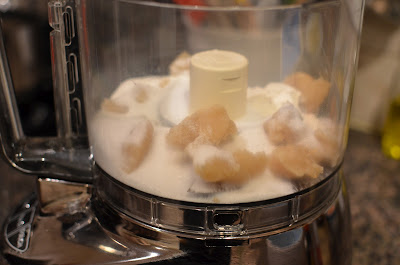 Once that's done, start adding the butter that's been cubed, along with vanilla and almond extracts. 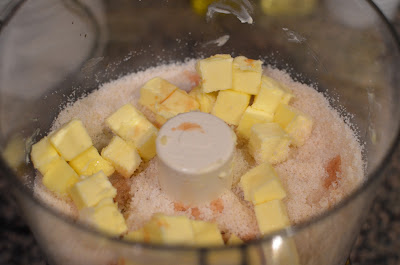 It should look fluffy and smooth once the butter has been incorporated. 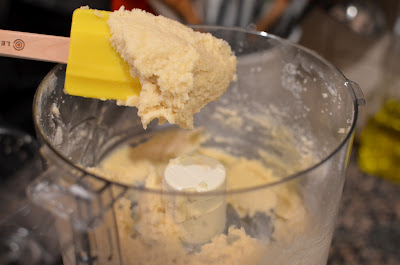 Eggs go in next, added and pulsed together one at a time.  Scrape around the sides of the bowl a couple of times to make sure everything is getting evenly incorporated. 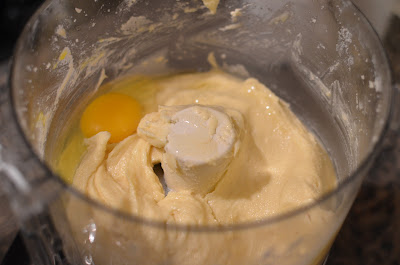 Lastly, add remaining flour, along with salt and baking powder, in 2 installments, pulsing after each until just combined. 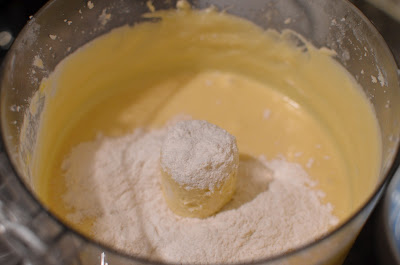 Scrape the cake batter into a prepared cake pan.  Use a springform or cake pan at least 2 inches in height.  The pan should be buttered and floured, with a parchment round at the bottom.  I've just started using a cooking spray made specifically for baking and it worked just fine (though I find that particular spray comes out quite heavy and I need to wipe it down a little to spread around).   Here's my mini version ready for the 325 degree oven: 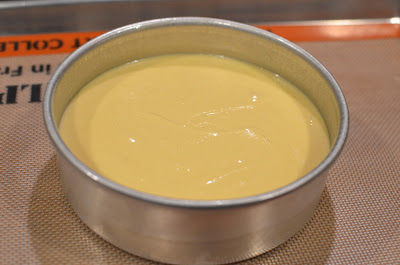 Notice there's probably a good 1-inch clearance from the batter to the top of the cake pan.  When it baked in the oven, the cake rises significantly, up to the very top, but did not overflow.  If you use a 2-inch tall cake pan, there shouldn't be any problem but it's not a bad idea to put a baking sheet under your cake pan if you are at all concerned.  A regular size cake is supposed to take approximately 65 minutes to bake but my small one took roughly 45 minutes.  Plus, it didn't turn out as dark as I expected (that's alright since the inside was perfectly moist) but I took it out when the cake was set in the center.  Run a knife around the side of the cake pan once out of the oven and let cool completely before turning out. 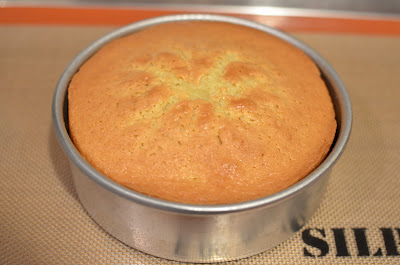 The top of the cake is a bit crinkly so a dusting of confectioners' sugar is nice.  All in all, this is a very moist, rich,  almond cake.  Enjoy it alone, with some fruit, whipped cream, or ice cream.  It's a treat any way. 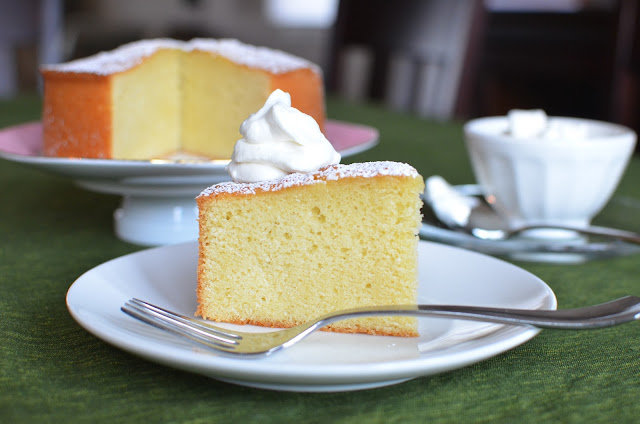 * I've slightly adapted the recipe by dialing down the butter even further.  I use 1 1/2 sticks of butter for a full recipe instead of 2.  The cake was plenty rich enough for me with that amount of butter so feel free to experiment.

Preheat oven to 325 degrees.  Butter a 9 or 10-inch springform or cake pan and line it with a round of parchment paper.  Grease parchment paper and dust the entire pan with flour, tapping out excess.  (Alternatively, you could use a cooking spray made for baking purposes).  Place cake pan over a baking sheet.

Grind sugar, almond paste, and 1/4 cup of flour in a food processor until almond paste is broken up and the mixture looks like sand.

Whisk remaining 3/4 cup flour, baking powder and salt together in a bowl.

Add the cubes of butter, vanilla and almond extracts to the bowl of the food processor and process until batter is smooth and fluffy.  Next, add eggs, one at a time, processing after each addition.  Scrape the sides of the food processor bowl a couple of times to make sure the eggs are evenly incorporated.  (The mixture might look curdled after all the eggs have been added; it will come back together after adding the flour.)

Add half the flour mixture and pulse a few times before adding the rest.  Pulse until the flour is just incorporated.  Do not overmix (you could also fold in the dry ingredients with a rubber spatula.)

Scrape the batter into the prepared cake pan and bake for approximately 65 minutes, until the cake is a dark brown and the center is set.

Remove the cake from the oven and run a sharp knife around the sides of the cake.  Let cool completely in the pan before turning out and removing the parchment paper round.