A childhood favorite of mine - red bean pudding cakes

It may sound odd but I have relatively few childhood memories.  I'm not sure if that means I just had a humdrum (boring) kind of childhood or that I'm repressing something (I hope not!).  It's to the extent where my family will tell me fairly eventful details about life when I was a child and I have no recollection of it whatsoever (when it's something that I really should remember).  I wonder if moving here to the States from Hong Kong when I was about eight has something to do with it...

And what I do remember is sometimes vague, as though I'm not sure I really lived it or if I just saw it on TV.  Sometimes I'll think of something and ask my sister to corroborate and she'll look at me like she has no clue what I'm talking about.  I think I'm making it sound more bizarre than it is (my sister's probably just messing with me) but suffice it to say, while I do have memory snapshots, I don't have lots of vivid childhood memories that link together.  But...some things I do remember include my love of certain childhood snacks.  It always goes back to food - no surprise!  If you're not Chinese, you might have no clue what this is but for me, it is one of my childhood loves.  Closest way of translation, they're "red bean pudding cakes." 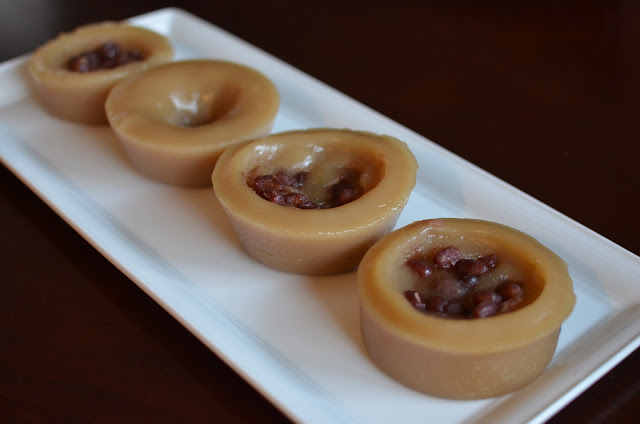 These were a kind of street food or snack you'd get from a cart back in the day in Hong Kong.  I "remember" the vendor used to come around to our apartment building selling them; he'd shout them out and I'd beg my mother for one.  They would be served on a stick, much like a lollipop!  The texture is chewy and dense, sweet with bits of red beans.  I love them, then and now. 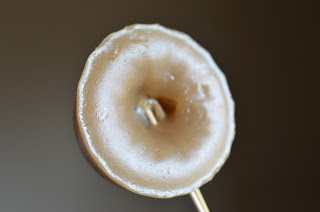 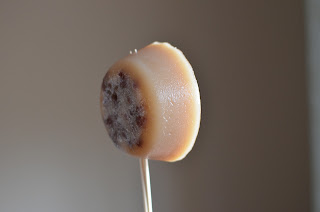 It's hard to find these little red bean pudding cakes around here.  When we went on a trip to Toronto, Canada (where there's great Asian cuisine), we found them in a few Asian bakeries and discovered a lady on the ground floor of a mall who made a delicious version that really brought me back.  But around here in the NY/NJ areas, they're not so common.

So after making some Asian desserts recently, I started looking for a recipe for these pudding cakes.  I found what seemed like a simple recipe and thought I'd give it a try.  As a major shortcut, I used canned or precooked red beans, which saves a lot of time since that's where the majority of the effort comes in.  These Chinese red bean pudding cakes are steamed and the batter is actually quite simple to mix together once you get your hands on the correct flours. 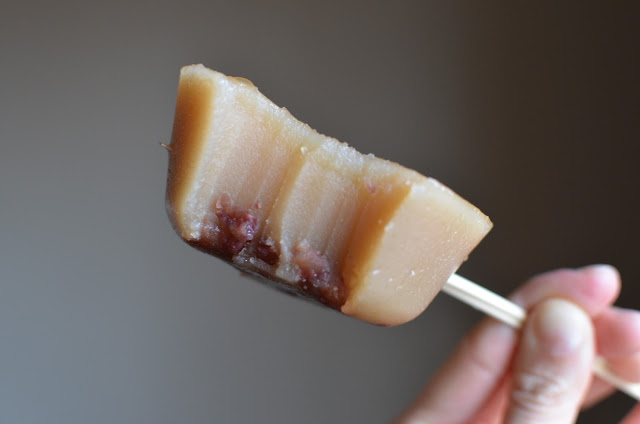 I am so happy I made these; I feel like I solved a little mystery since I'd always wondered how they're prepared.  This was like nothing I'd ever made and I had no idea what to expect.  But when I lifted the steamer, I was thrilled to see that the liquid and loose batter had come together to form these little cakes that looked very much like the ones I adored as a child.  I'll admit they're not the best red bean pudding cakes I ever had but as a simple, homemade version, it's great.  And short of making a trip back to Hong Kong, I'm happy to have this recipe for when I have a hankering for a real childhood snack.

I think these pudding cakes are best eaten the day they're made, after they've cooled down.  The edges are nice and chewy, my favorite thing about them.  I find that once they've been refrigerated, they lose that almost-bouncy chewiness around the edges, though the center is still nice with the bits of sweet red beans.

So here's to childhood memories and favorite childhood snacks, whatever yours may be.


To make these Chinese red pudding cakes, you need to track down two kinds of flours: rice flour and wheat flour (or wheat starch).  You see them pictured below and they should be readily available in Asian supermarkets. 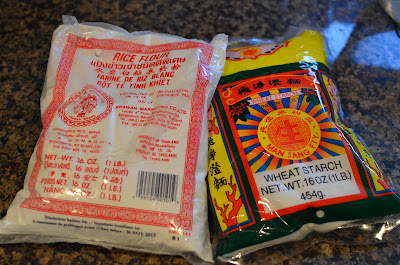 The other important aspect of these pudding cakes is the red beans.  You can add as much or as little as you like into the little cakes but ideally, you should cook some "raw" red beans by boiling them until they're softened.  This could take up to an hour so I took a short cut.  I found precooked red beans at the same market where I bought the flours and decided to use that, which really makes prepping these pudding cakes a very quick process.  Cooking the red beans yourself would be better since I found the canned red beans softer and sweeter (thought I tried not to use much of the syrup they're sitting in) than I prefer but the time saving is phenomenal.  I'm not sure I'd want to make these if I had to start with boiling the red beans first. 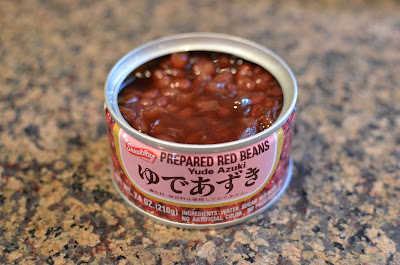 Once these ingredients are in place, it's just a matter of some water and brown sugar to put it all together before they get steamed.

To make about 6 red bean pudding cakes, I start with the sweet base of the pudding.  Fill a small saucepan with 1 1/4 cups water and add 4 oz. brown sugar (use granulated sugar if you want to make the "white" version of these pudding cakes).  Bring the mixture to a boil, making sure the sugar has fully dissolved.  Set it aside to cool for a couple of minutes while you work on the flour mixture. 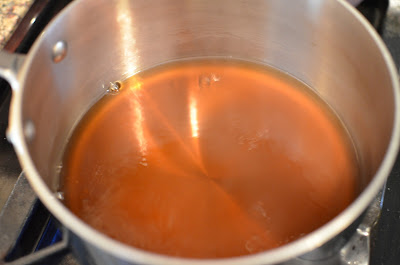 Sift 3.25 oz. of rice flour and 2 oz. of wheat flour into a bowl (I don't know how I ever managed without my little kitchen scale before).  Add 1/2 cup water and stir with a wooden spoon until combined.  The mixture will be like a thick paste. 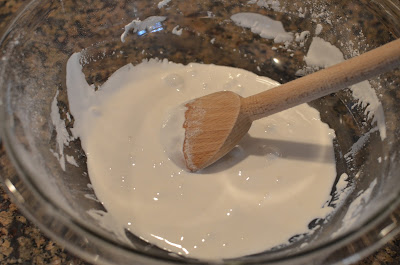 Add the brown sugar mixture to the flour paste and stir until smooth.  The mixture will be thin and won't look right to you but it works (in my experience). 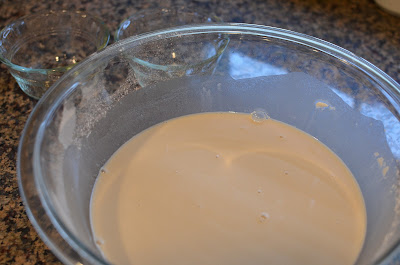 Lightly grease custard cups or small bowls with cooking spray (they will pop right out later).  I used a mixture of custard cups and ramekins and found that the rounded custard cups or bowls make more authentic looking red bean pudding cakes. 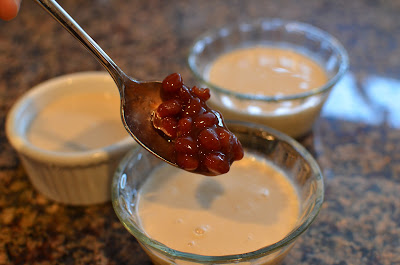 Fill the bowls and add red beans, as much or as little as you like.  The red beans sink to the bottom when adding them at this stage.  If you'd like some red beans in the middle or top of the pudding cakes, add more half way through the steaming time.  You can steam these in a steamer basket like I did.  Ideally, I'd want to steam them all at the same time but since I couldn't fit more than 2 or 3 at a time, I had to do it in batches.  It could be a coincidence but I thought my first batch came out best. 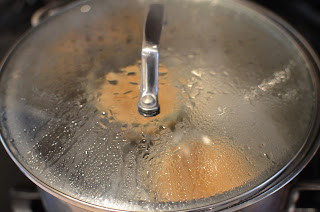 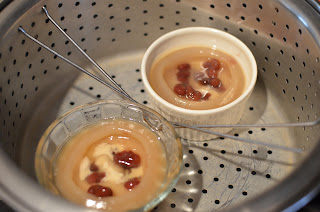 Steam the puddings for about 20 minutes; you can tell they're done when the tops have set.  There will be a typical indent in the center of these cakes. 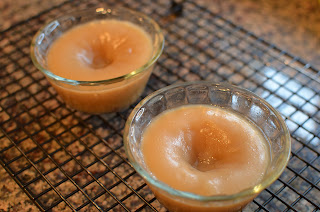 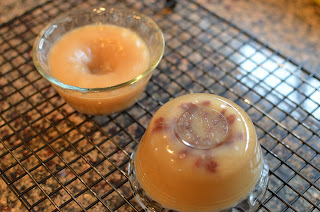 I found these best eaten fresh, just as they're cooled.  The texture is just right, with a chewiness and bounciness I really love.  You can keep them tightly wrapped in the refrigerator for a couple of days but I find they harden in the fridge and you lose a lot of that chewiness. 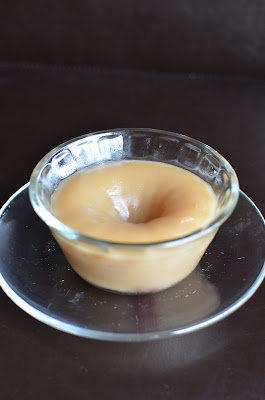 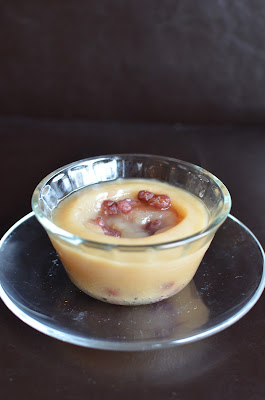 Place 1 1/4 cups water into a saucepan and add the brown sugar.  Bring to a boil and cook until sugar is dissolved.  Set aside to cool for just a couple of minutes while you work on the next step.

Sift the rice and wheat flour together into a bowl.  Add 1/2 cup water and stir together with a wooden spoon until smooth.  Add the sugar mixture and stir quickly until mixture is incorporated and smooth.  The batter will be quite thin.

Fill custard cups with the batter.  Add red beans (I try not to use much of the syrup the red beans are packed in).  These beans will sink to the bottom.  Steam for 20 minutes, or until tops of the puddings are set.  About halfway through the steaming time, you can add more red beans if you'd like to have some in the middle or surface of the pudding cakes.

These are best eaten the day they are made, once cooled.  You can refrigerate them, tightly wrapped, for about 2 days but I find that they harden in the fridge and won't be as chewy as they are when fresh.