I have to tell you, this is not the best looking banana bread that I ever made.  I didn't have very high hopes for it when it came out of the oven, looking super dark and sagging in the middle.  But as we all know, it's what's "inside" that matters and luckily, the taste far surpassed its appearance.  This banana bread is seriously moist and the flavor of the toasted walnuts really pops. 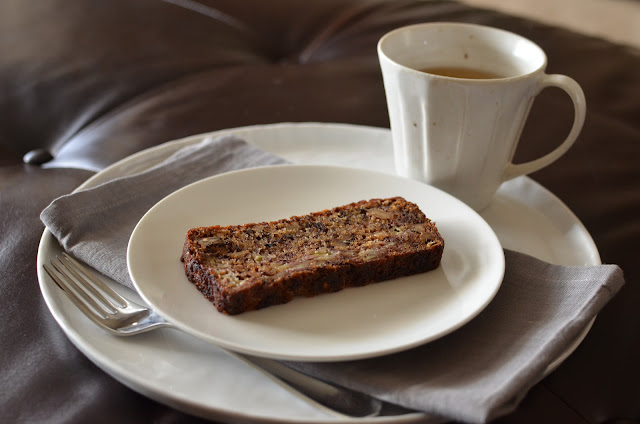 I never really thought I'd be so interested in banana-related recipes.  But my husband has always enjoyed them and my eyes were opened by some wonderful recipes I found including these fabulous banana muffins and that seriously-addicting banana bread with chocolate, just to name two.  So this recipe I'm trying today is "Flour's Famous Banana Bread", from the cookbook of Flour Bakery in Boston.  Aside from the bananas, this bread relies on canola oil and crème fraîche for moisture while the toasted walnuts contribute a key flavor.  And I place an emphasis on toasted since that makes a huge difference in the final result. 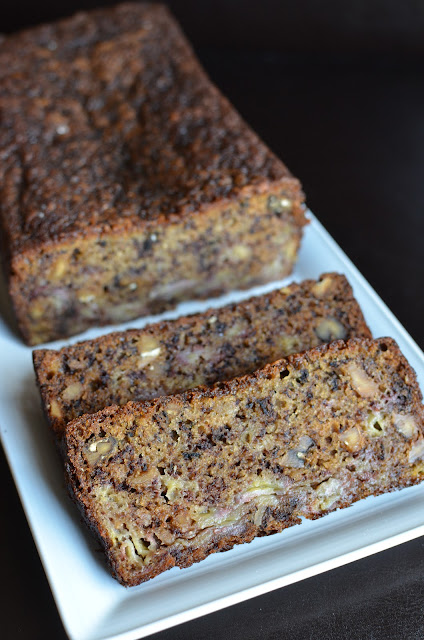 The process of putting this banana bread batter together is a little different from what I'm used to.  It's not simply a matter of mixing dry and wet ingredients together like you'd generally expect when it comes to muffin and quick-bread recipes.  In this case, you use the stand mixer and start by whipping the sugar and eggs together for a good five minutes to aerate the batter and go from there.  So in a way, it's more like mixing a cake batter, which helps explains the moist, cake-like texture of this banana bread.  The batter is quite liquid and as you can see, it came out quite golden (alright, just plain dark!) but I think that browning gave it a good caramelized flavor. 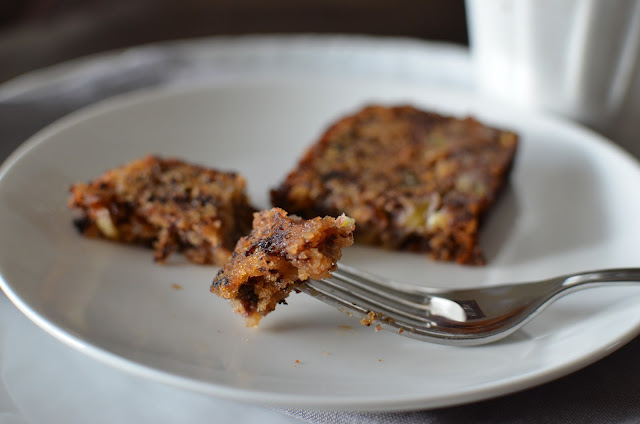 Now the down side, of course, is it takes a little more time/work to put this batter together versus some other banana bread recipes.  I thought the bread's flavor was very similar to my favorite banana muffin recipe, which is more of a quick mix and doesn't require the stand mixer.  If I were to pick, I'd more likely go with that banana muffin recipe versus this one given the similar taste, better appearance, and ease (I'm just being honest here), but if I find myself with some extra crème fraîche, I'd certainly think of this recipe because that caramelized flavor and moistness is quite nice.


As I mentioned, it's really important to toast the walnuts.  The aroma and flavor of the walnuts are magnified ten fold from the toasting.  I placed mine in a 350 oven and toasted them for almost 15 minutes until the nuts are golden brown and you can clearly smell them.  Then cool the walnuts slightly and chop coarsely. 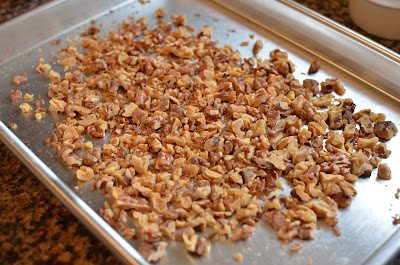 Sift the dry ingredients (flour, baking soda, little bit of cinnamon, and salt) into a separate bowl and set it aside. 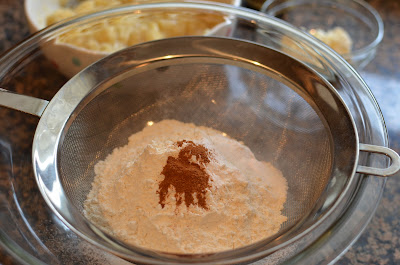 In a stand mixer fitted with the whisk attachment, beat the sugar and eggs together on medium speed for 5 minutes.  The mixture will look light and fluffy, and be increased in volume.  Turn the mixer to low and very slowly drizzle in 1/2 cup of canola oil.  Do it slowly so as not to deflate the sugar and egg mixture and give it time to incorporate. 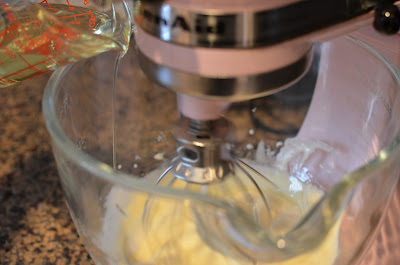 The mashed bananas (1 1/2 cups from about 3 large bananas), crème fraîche, and vanilla extract go in and get mixed until just combined. 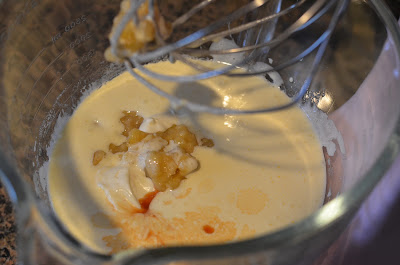 Then remove the bowl from the stand mixer and fold in the flour mixture and then the toasted walnuts with a rubber spatula.  You'll find that the batter is very thin.  Pour it into a 9 by 5 inch loaf pan.  I greased the pan with cooking spray but would recommend lining the bottom with a piece of parchment paper because I had a little problem with some of the bottom sticking. 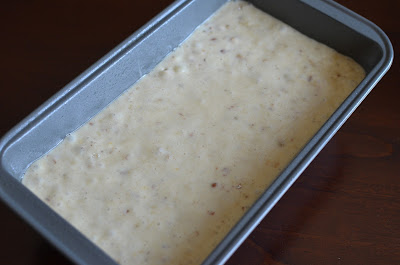 The bread bakes in a 325 degree oven for 1 hour to 1 1/4 hours.  Mine took a solid hour and 15 minutes.  I found the loaf was quite dark at the hour mark but the middle was still sagging (not springing back to the touch like it should when properly cooked).  I tented the top in the last 15 minutes but as you can see, the banana bread is quite dark throughout.  Let the loaf cool for at least 30 minutes before removing from the pan and letting cool completely on a wire rack. 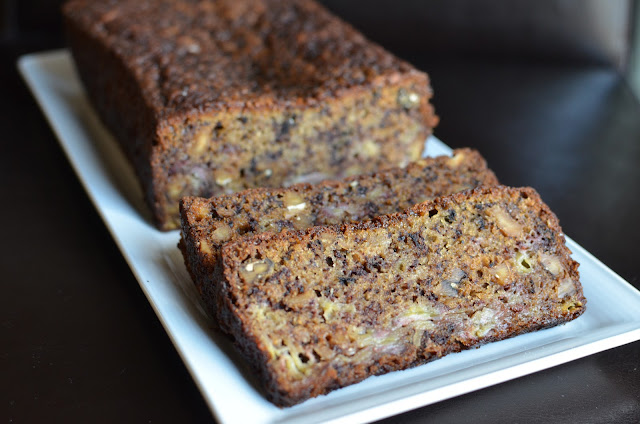 * This recipe comes from the cookbook itself and is the one I used but a very similar version is provided through Food Network.com.  That recipe uses 1 2/3 cups flour, 2/3 cups of walnuts, and bakes at 350 degrees for 45 minutes to an hour.

Sift the flour, baking soda, cinnamon, and salt into a bowl.

Using a stand mixer with the whisk attachment, beat the sugar and eggs together on medium speed for about 5 minutes (8 minutes if using a hand mixer), until light and fluffy.

Turn the mixer to low speed and slowly drizzle in the oil over the course of about 1 minute.  You want to slowly drizzle the oil so as not to deflate the sugar and egg mixture and to allow the oil to be absorbed.  Add the bananas, crème fraîche, and vanilla, mixing on low speed until just combined.

Using a rubber spatula, fold in the flour mixture and the nuts until just thoroughly combined.  Pour the batter (which looks thin and quite liquid) into the prepared loaf pan, smoothing the top.

Bake for 1 to 1 1/4 hours, or until the center springs back when you gently press it.  (If like me, you find your banana bread quite dark but not yet done, tent the top with a piece of foil).  Let banana bread cool in the pan for at least 30 minutes before removing from the pan to finish cooling completely.