I'm welcoming a very special guest in the kitchen with me today.  It's my six-year old son, Jalen, and he's joined me to make a very colorful treat. 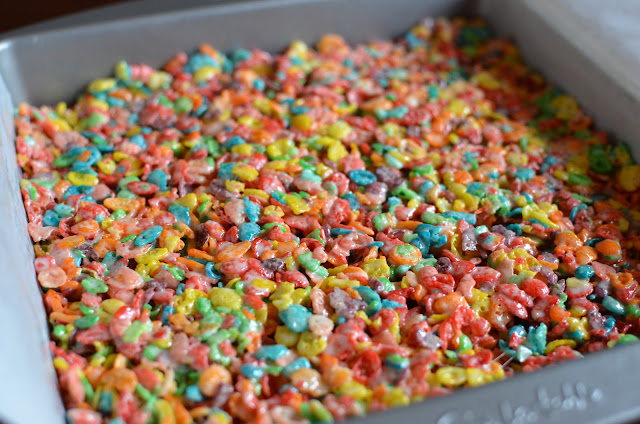 My little guy (or "big guy" as I like to call him) is actually in the kitchen all the time - but he's there eating, not usually helping me cook or bake.  I wish I could say he loves being in the kitchen with me and we bond by baking cookies and brownies together but the truth is, he isn't particularly interested.  I remember one time a couple of years ago, I got him in the kitchen helping me roll meatballs; I thought he would find it so much fun but he couldn't wait to wash and get that squishy stuff off his hands after the first meatball.  It was really funny actually.  And sure, he'll decorate cookies during the holidays and I can talk him into helping me stir a thing or two but usually, if I ask whether he'd like to help me make something, he'll say "of course, no!" as though he has so many better things to do.  I think he prefers his role as chief taste-tester for the time being.

So this is a special occasion and for that, I was willing to pop open a curiously colorful box of cereal we'd never tasted before to make this colorful treat. 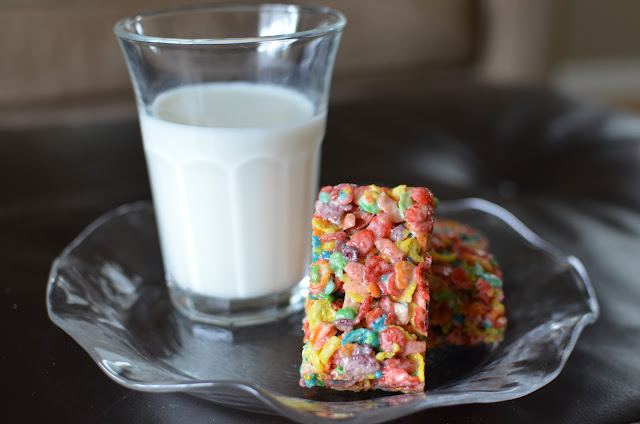 Jalen likes to eat Rice Krispies cereal (separate from his milk though) and he fairly enjoyed those chocolate treats I made recently for the first time.  One day, he saw an igloo shaped rice krispy treat (a holiday edition) on the cereal box and asked if we could make that.  I wasn't exactly up for the challenge of making an igloo (and the holidays were long past) but I wanted to seize upon any interest in making something with me.  I remember seeing pictures of these fruity pebbles treats and thinking I might make a batch one day since I'd heard that my nephews are fans of the cereal.  My son was interested in helping me make them and that was all the excuse I needed to get in the kitchen.  So we found ourselves in the kitchen mixing and stirring up a batch of these Fruity Pebbles marshmallow treats one early Sunday morning. 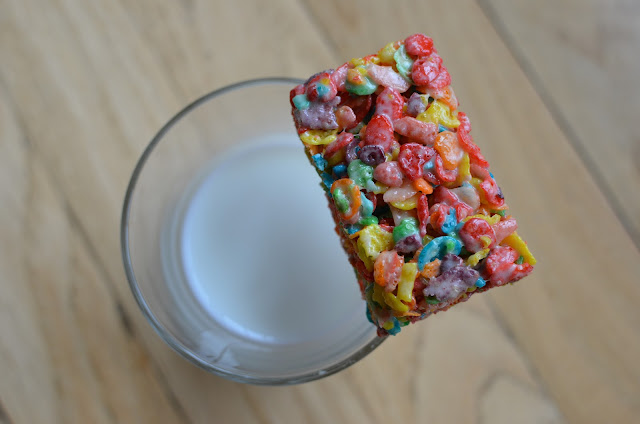 It was a blast to do this simple project with him!  I think there's a hidden cook/baker in there somewhere and I look forward to persuading him to play some more in the kitchen with me in the future.  Obviously, these are very simple treats to make with kids, allowing them a chance to scoop, stir, mix and press before it's all done.  We made a pan of the treats within 15 minutes or so and had some cut-out treats packed and ready to deliver to the little guy's cousins in no time. 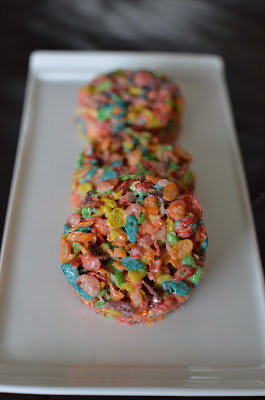 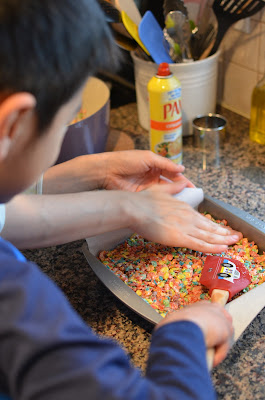 Now all that being said, I have to confess that I don't think it's very likely I'll be making these treats again.  I've never tried this cereal before and the little one liked it (of course) but it is very sweet and as appealing as all the colors are visually, I can't help but think about what it must've taken to achieve those vibrant colors.  But everything in moderation, right?

Thank you, Jalen, for joining me in the kitchen today.  I had a blast mixing things up with you; you did a superb job!  Thanks also to my husband for helping us and being our photographer too. 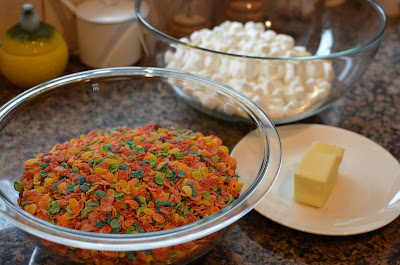 Simply melt the butter in a large heavy-bottomed pan over medium-low heat.  Add the marshmallows and stir until it's also melted. 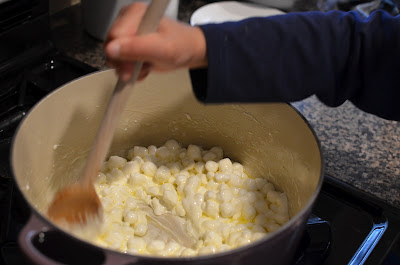 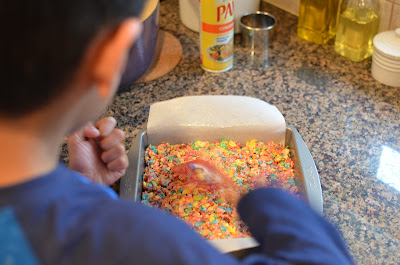 Let the mixture cool until set.  Then simply lift out of the pan using the parchment overhang to cut into squares or any shape you like.  If you don't mind scrapes, try using cookie cutters to cut some fun shapes.  I made some rounds but stars or flower shapes would be fun. 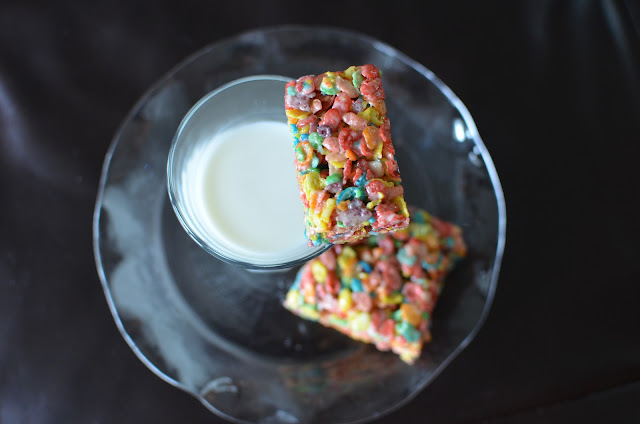 Grease an 8-inch square baking pan and line it with a piece of parchment paper, with about a 2-inch overhang on two sides.  Lightly grease the paper.

Melt the butter in a large heavy-bottomed pan over medium-low heat.  Add marshmallows and stir until melted.  Turn off the heat and add the cereal, stirring thoroughly until combined.

Transfer the mixture to the baking pan.  Use clean wet hands or a lightly greased spatula to press the mixture down evenly around the pan.  Let cool and cut into squares or other shapes you desire.  Try using cookie cutters to make fun shapes.