Recently, my husband celebrated a special birthday.  We'd made lunch and dinner plans out but I asked what he'd like for breakfast since we'd be home together and he requested financiers.  I popped open a jar of chestnut cream for filling the financiers and that got me thinking about how I should use the rest of the precious jar.  Then I got to thinking...the other thing my husband often requests for breakfast are cinnamon rolls... 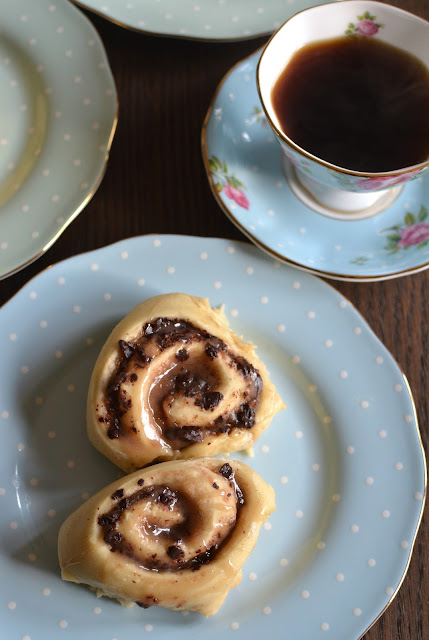 A couple of years ago, I had a craving for cinnamon rolls and found a small batch recipe that I adapted.  Since then, my family and I have been hooked and you may have seen me make versions from Nutella-hazelnut to one featuring an almond paste filling.  With the holidays, I always think about chestnuts and I got to thinking that I should use some of my chestnut cream as a filling for my next batch of cinnamon rolls.  So this batch of cinnamon rolls with a chestnut cream filling - and a little chocolate - was born and it was a hit at my house...though I have to say that every version of homemade cinnamon rolls has met with approval here! 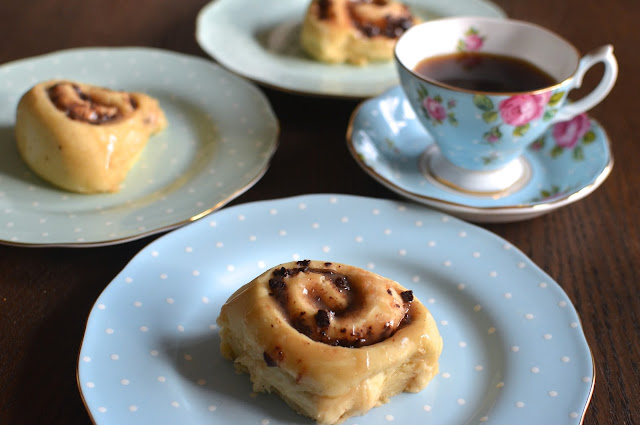 It's a special morning we look forward to when there are homemade cinnamon rolls coming out of the oven for breakfast!  There's nothing like enjoying them warm.  The rolls themselves are super soft, tender, and squishy.  The filling here is simply chestnut cream, with a modest amount (a scant ounce is enough) of finely chopped dark chocolate, and, of course, a touch of cinnamon.  My family and I really enjoyed the flavor; the chestnut cream provides a wonderful nutty sweetness and the chocolate melts and turns the filling into a marvelous chestnut cream-chocolate paste, that is very enjoyable. 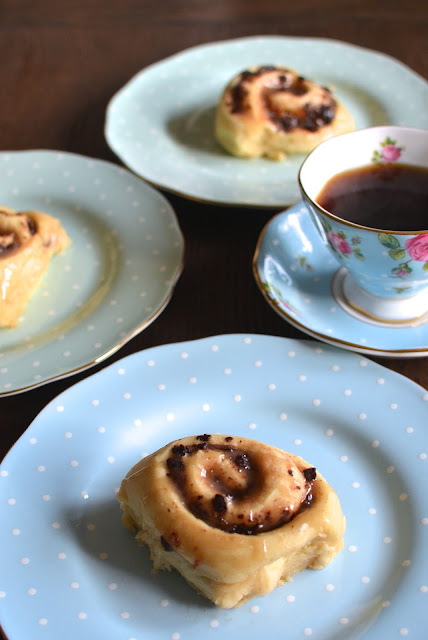 To make things extra sticky, sweet, and tactile, I topped the warm rolls with a simple chestnut glaze I made with a little confectioners' sugar, low-fat milk and a little more chestnut cream.  Oh my...this was another great use of my chestnut cream stash.

Like all delicious things, these cinnamon rolls vanished all too quickly.  We find ourselves whipping at the last bit of sticky glaze from our plates and wondering when we can have cinnamon rolls again...it's a recurring thing around here.

Here's one of my favorite ingredients, chestnut cream.  I use it in many ways (from cake to ice cream, just to mention two) and now I can add cinnamon rolls to the list of possibilities.  You can buy chestnut cream via amazon; the Clement Faugier brand is easier to find and very good. 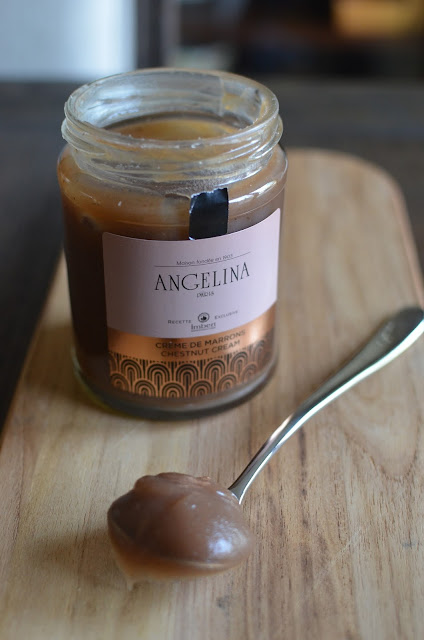 For this recipe, which makes 4 cinnamon rolls, I use a generous rounded 1/4 cup of chestnut cream.  Thinking that maybe I should thicken up the chestnut cream slightly to use as the filling, I whisked in about a teaspoon or so of confectioners' sugar to "stiffen" the cream up a bit; in retrospect, I don't think that's altogether necessary. 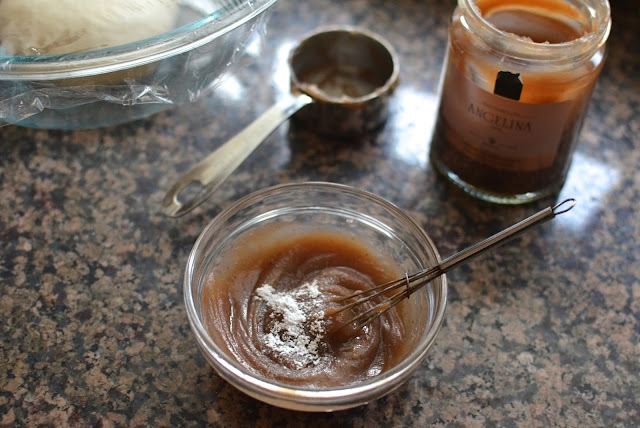 As for the chocolate, you could omit it if you want to.  I typically add just 1 ounce of dark chocolate into my batch of 4 cinnamon rolls.  In this case, you could even use a little less to let the chestnut cream flavor and sweetness come through.  It depends on your preference.  My son is definitely in favor of more chocolate; while I generally agree on principle, I actually wouldn't mind less chocolate in this case to let that chestnut cream flavor shine. 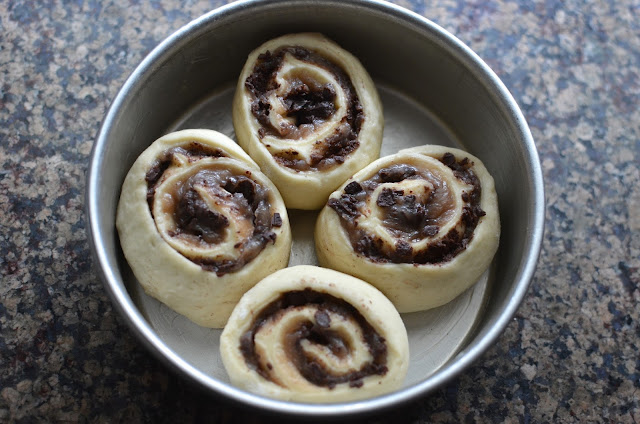 I always prep the rolls the night before and let them have a final second rise in the morning for about an hour or so before baking and enjoying them fresh - and warm - with my family!  It is a serious treat! 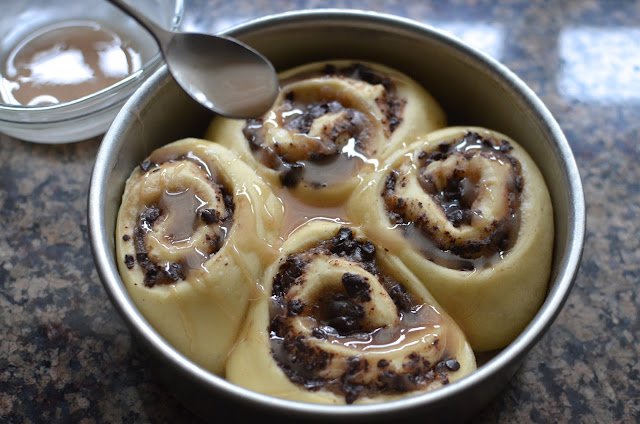 It becomes an even better treat once the rolls get their glaze treatment!  I just whisked a couple tablespoons of confectioners' sugar with a spoonful of 1% milk and a teaspoon of chestnut cream...at the last minute, I decided to add a couple drops of vanilla extract as well.  Adjust the glaze to the consistency you want (add more confectioners' sugar or milk) - a nice flow - and drizzle it over the warm rolls.  Then, it's just time to get them out of the pan, on to plates, and into our hands and tummies.  It gets messy and oh so enjoyable! 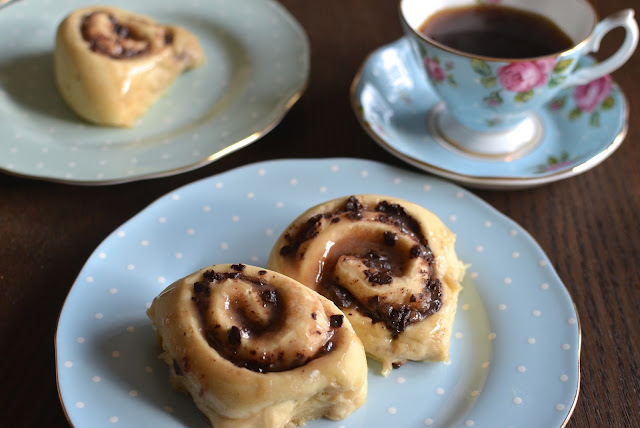 Cinnamon roll mornings are very exciting at my house!  I'm already looking forward to the next time (and I know for sure my husband is too)!

Turn the dough onto a lightly floured surface and roll or pat/press the dough into a 5x10 inch rectangle.  Whisk the teaspoon of confectioners' sugar into the chestnut cream (this is probably not totally necessary but I did it to stiffen up the cream a bit). Spread the chestnut cream filling evenly over the dough, leaving about 1/4 to 1/2-inch border along the sides.  Top evenly with chocolate and sprinkle cinnamon on top.

Let rolls cool slightly for about 5-10 minutes in the pan.  In the meantime, make glaze by mixing milk into the confectioners' sugar, then whisking in chestnut cream and vanilla until smooth.  Adjust with additional confectioners' sugar (or milk), as needed, until you have a fluid, spreadable consistency.  Drizzle the glaze over the rolls and serve immediately, while still warm.