Have you ever had a financier?  These little tea cakes are very common in Paris and were one of the memorable things we snacked on during our trip there last Spring.  Made with browned butter, there is something very special about them. 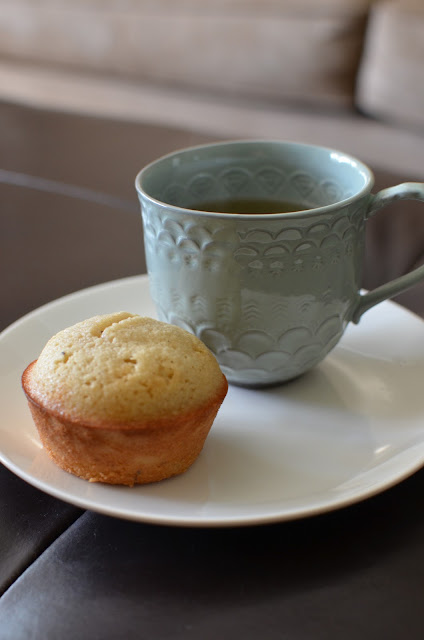 Maybe part of their appeal is you don't expect them to taste so good.  They're rather simple and unassuming looking.  Traditional financiers are shaped in a small rectangular mold or loaf and when baked, their golden color makes them look like a bar of gold.  I found that in Paris, you see financiers in boat or basic muffin shapes (and they're usually next to the madeleines).  They look like a simple little snack cake but when you take a bite, it will very likely make you stop and take a second look at what you're eating because it's that good.  At least, that has been my experience...﻿﻿

These little cakes (sometimes referred to as cookies though I find it hard to think of them that way) pack a delicious moist flavor that's really unique.  The secret is the browned butter.  They're somewhat surprisingly made with egg whites, as well as ground almonds, which add nice texture and flavor.  Financiers come in an array of flavors from pistachio to chocolate or chestnut (as shown in the photo above) so you can get creative with the type of ground nuts you use.  You could even experiment with fillings like I did.  I hid some chestnut cream (that I "imported" back from Paris) into a couple of mine.

﻿Now, back to the reality of making these in my own kitchen.  I wanted to recreate that memory of being surprised by how good they were when we tasted some from Ladurée and Le Bon Marche's Grande Epicerie (a mall with its own separate food hall) in Paris.  I used the recipe in Paris Sweets to make these.  They are easy to make and done right on the stovetop.  The only "trick" is to brown the butter and make sure it doesn't go over to black.

These homemade financiers did not disappoint!  They may just look like a bland corn muffin at a glance but they taste way better than they look.  The edges and tops are addicting crisp and sweet, while there is an interesting texture to them because of the ground almonds.  The best part - the cake is moist and flavorful; there is this almost mysterious caramel flavor to them (thanks to that brown butter).  I couldn't stop eating mine and I had devoured one before I knew what hit me.  Maybe it would've been better to make mini cakes, in mini muffin cups, in order to practice more self control. 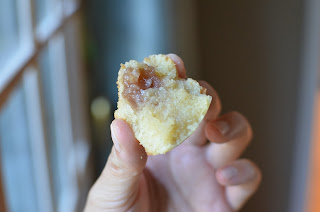 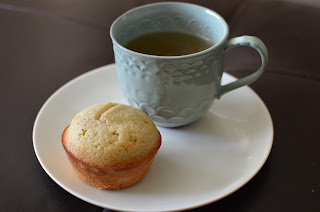 The bad news is these are best eaten fresh, the day they're baked.  We had one leftover that we ate the next morning; it was still good but fresh is definitely better.  Now, the good news is you can keep the batter refrigerated for up to 3 days and bake them in installments.  I didn't have this problem (or luxury) because I made half the recipe, which turned out only 4 standard size muffin-shaped financiers when I was expecting 6.  So no leftover batter this time but I'll correct that error next time around.

You need 5 ingredients to make these financiers:  butter, sugar, ground almonds, egg whites, and flour.  I made half a recipe so the proportions will look small below. 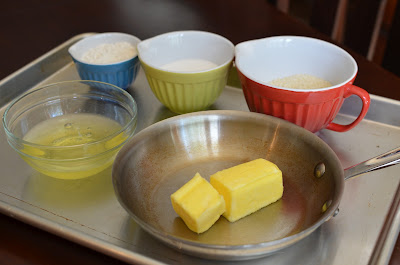 You can buy bags of ground blanched almonds (almond meal) but I like to grind my own when I need it.  It's a lot more economical to buy packets of blanched slivered almonds rather than the ground kind. 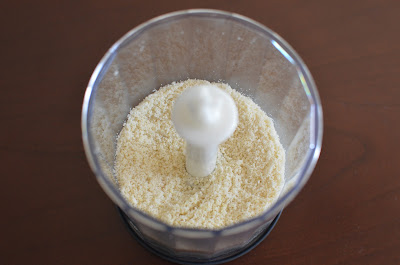 The key to the recipe is the browned butter, which adds that deep, rich flavor to the tea cakes.  For half a recipe, I'm heating 6 tablespoons of unsalted butter.  Heat it in the skillet or small saucepan over medium heat, swirling the pan once in a while as the butter melts.  It will sizzle and bubble, and you'll see the milk solids separate from the butterfat.  Heat it until the butter reaches a deep brown and gives off a nutty aroma.  The French call this "beurre noisette" or hazelnut butter - appropriate since the color and aroma given off is reminiscent of hazelnuts.

Keep a close eye on it as it darkens because it can easily burn/turn over to black in a matter of seconds.  (I really wanted to make sure my butter was properly browned to get the full effect.  Not having much experience doing this, I was a little concerned that I went a few seconds over the mark but the cakes came out delicious.)  Remove the browned butter away from the heat and keep it in a warm spot nearby. 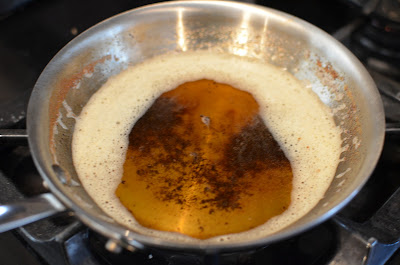 Next, mix the ground almonds and sugar together into a large saucepan, then stir in the egg whites.  Heat this combination over low heat, stirring constantly with a wooden spoon, until it is hot to the touch (about 3-4 minutes for me).  It will look a bit more loose, runny in consistency, and slightly white in color. 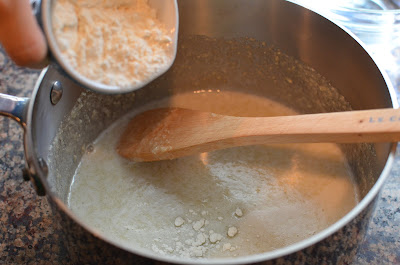 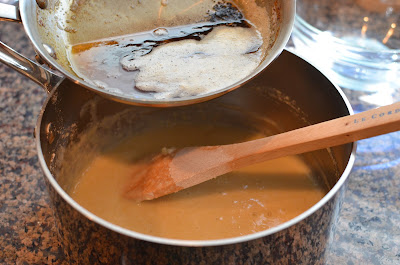 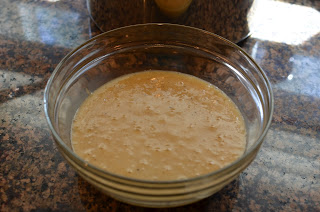 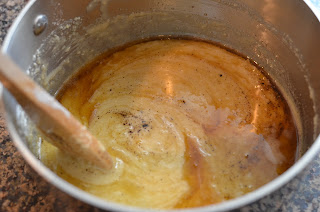 Gently stir the brown butter into the batter until incorporated.  Transfer the mixture to a bowl.  Since the batter is warm, it needs to chill for at least an hour (or up to 3 days) with plastic wrap directly on its surface.

Time to bake!  I went with standard-size muffin pans (mini's are a good idea and common, too).  In my experience, the half recipe only gave me enough batter to fill 4 standard cups.  Butter the cups you'll need and flour them, tapping out the excess.  It's better to butter/flour more in case you have more batter because it'll be very difficult to do so after some of the cups have been filled (use baking spray if that happens).

Fill each cup almost to the top with batter.  When we were in Paris, I brought back a few jars of chestnut cream because I love chestnuts, it's so common/inexpensive there, and hard to find here.  I also bought a couple of cute mini cookbooks at Lenotre - one featured recipes using chestnut cream, the other for Nutella.  In the chestnut cream book, there is a picture of some financiers stuffed with chestnut cream so I ran with the idea.  The books are written in French so I can't compare recipes! 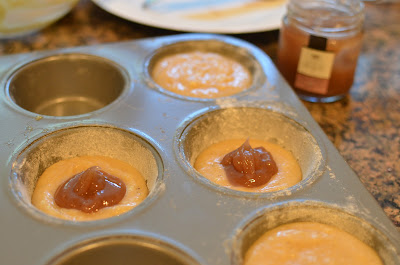 I took a guess and placed a heaping teaspoon of cold chestnut cream into the batter.  Then I filled it with more batter. 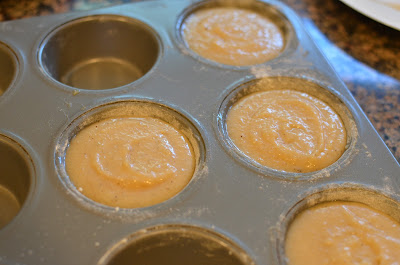 Bake the cakes for roughly 12-13 minutes but baking time depends on what type of mold/how much batter you used in each.  I find that mine are done closer to 15-16 minutes so that the center is set (bare in mind the batter starts out chilled from the fridge; it doesn't hurt to set the batter out a bit in advance to let it come closer to room temperature being baking).  They should be ready when the financiers are lightly golden.  They will have puffed up into a dome and feel springy when lightly touched. 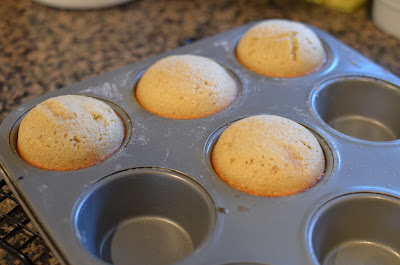 Remove the cakes from the muffin tin, using a blunt knife or small offset spatula to help you.  Let them cool on a wire rack.

I love the chestnut cream filling but they are wonderful without it as well.  You can make other flavors (using say pistachios or hazelnuts instead of almonds) or try adding some Nutella, jam, or even a piece of fruit on top, the way the recipe from Dorie Greenspan suggests. 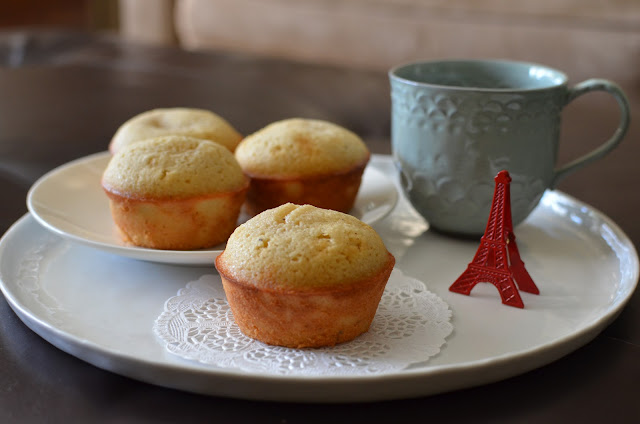 They are a delicious little taste of Paris at home...I'll be making them again.


Update (November '12):  I have made them again recently and they really are just delicious!  I highly recommend baking these as needed so you can enjoy them fresh from the oven when they are at their best.  Don't be afraid to fill the molds fairly close to the top.  The cold batter spreads and the crispy, crusty sides are worth fighting over.  If you do experiment with fillings, try adding it closer to the 3/4 full mark.  I found that the filling stayed closer to the center instead of sinking to the bottom. 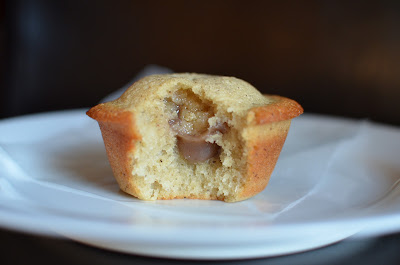 
Brown the butter: Place butter into a small skillet.  Cook over medium heat and bring it to a boil, swirling the pan occasionally.  It will sputter and sizzle as it cooks.  Continue cooking until butter turns a deep brown.  Watch closely since it can turn black in a matter of seconds.  Remove pan from the heat and keep it in a warm spot nearby.

Mix sugar and grounds almonds together in a large saucepan.  Stir in the egg whites and place the pan over low heat.  Stirring constantly, warm the mixture until it turns runny, slightly white in color, and feels hot to the touch, about 2 minutes (took me 3-4 minutes).  Remove the pan from the heat.  Stir in flour.  Then gradually stir in the browned butter until incorporated.

Transfer the batter into a bowl and cover it with plastic wrap pressed directly against the surface.  Chill for at least 1 hour (or up to 3 days).

Preheat oven to 400 degrees.  Butter and flour (I find baking spray also works well) 8 cups of a standard size muffin tin.  Fill each cup almost all the way to the top with batter.  Bake until financiers are golden, have domed, and feels springy to the touch.  This takes about 12 to 13 minutes but bear in mind that baking time will vary if you use a different size mold (I find that mine need a few extra minutes).

Turn the financiers out (using a blunt knife if necessary) to cool on a cooling rack.  They are best eaten the day they are baked.

Optional fillings:  Stepping away from tradition, you could consider fillings for your financiers.  After spooning the batter into the molds, you can press a sliver of fresh fruit into the center of the batter before baking.  You could also experiment with jam, Nutella, or chestnut cream like I did.  For regular muffin size financiers, I dropped a heaping teaspoon of chestnut cream after filling the muffin cup about 2/3 to 3/4 of the way with batter, then covered the filling with a big dollop of additional batter.