Chocolate and mint.  I'm not sure how it all began but it is one of my favorite combinations.  And brownies are among my favorite things on earth.  I pretty much love all things chocolate! 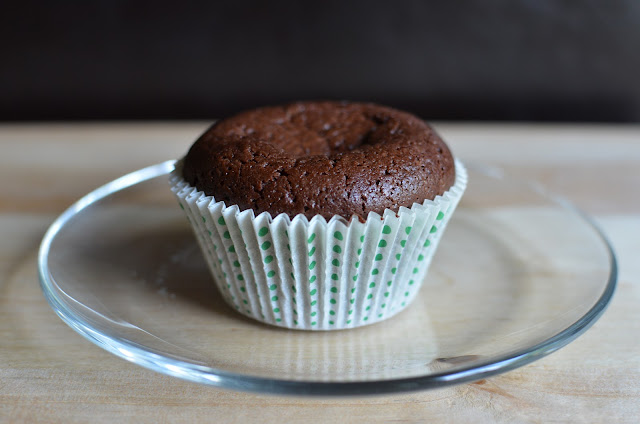 I know it's been out for years but I only recently bought a copy of Martha Stewart's Cupcakes.  While I love a chocolate cupcake with ganache frosting, I'm not a huge cupcake fan, mainly because I'm not a frosting - particularly, buttercream - lover (again, unless there's an overwhelming amount of chocolate involved).  But when I last flipped through the book, I couldn't help but notice many recipes I'd love to try eventually.  Plus, I can't go wrong with one of Martha's books.  It's always well organized, reliable, and I love that there's a photo for each recipe.  Ever since Cupcakes came out, I've been waiting for a "Martha Stewart's Cakes" book that has still yet to materialize; I would buy that in a heartbeat! 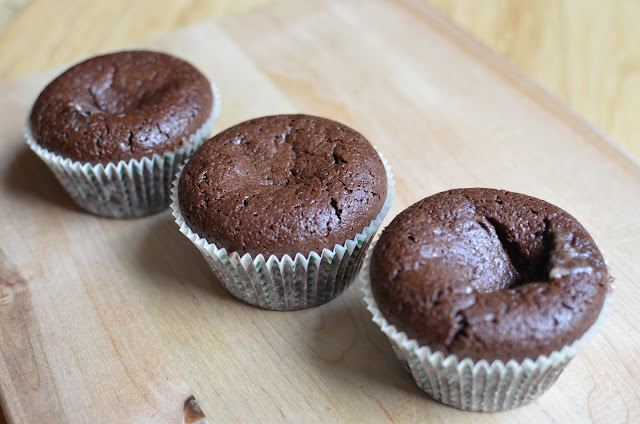 
It's not quite a surprise filling, I find, since the peppermint patty "leaked" out of most of my cupcakes even though I was pretty careful to follow the instructions on hiding them.  I kind of like the volcanic look to them and really don't mind a little peppermint lava flowing out.  If you make these and get a particularly "runny" batch, maybe we could just rename them "mint lava brownie cupcakes".  You could tidy them up a bit or hide any filling poking out by dusting some cocoa powder over the top.  I think they're fine either way. 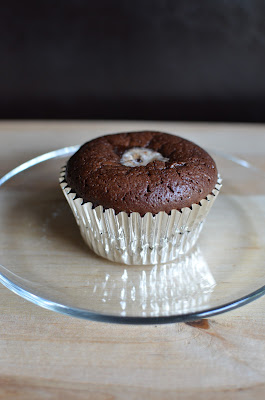 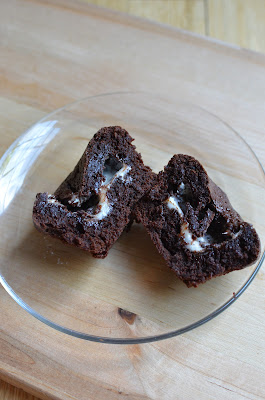 I really enjoyed these.  I love the crisp, shiny, crackly, almost hard tops on these brownie cupcakes.  Be careful not to overbake them so that the center is not only minty, thanks to a York peppermint patty, but also fudgy and chocolaty.  The brownie-cupcake batter was so good, I'd even make these plain, without the peppermint patty inside.  Or instead, I'd just add a touch of peppermint extract or almond extract to the batter.  And the thing that really makes this recipe a keeper is that these cupcakes retained their texture, staying moist and fudgy with a crisp top even on its third day!  They're also very easy to make. 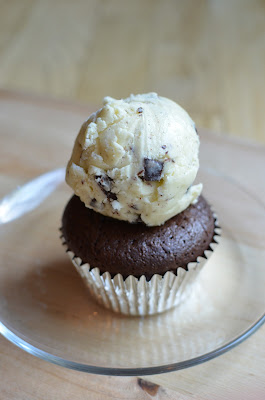 The craggy, sunken tops seemed to call out for a scoop of ice cream.  That's probably over the top but I did it anyway.

Much like most brownie recipes, these brownie cupcakes are very easy to make.  I used small York peppermint patties for my "stuffing". 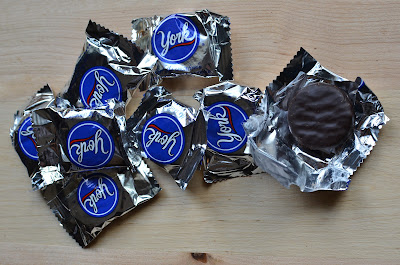 After making them, I remembered I had a stash of Godiva mint medallions that I picked up on sale recently.  They're so good (though my favorite is their midnight swirl)!   I wish I'd thought to make the brownie cupcakes with a few of these medallions but the Yorks work perfectly well. 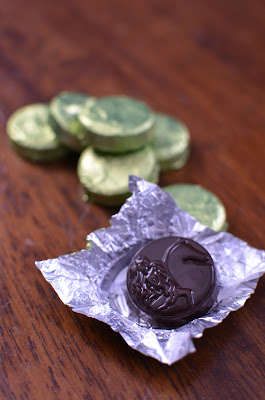 I divided the recipe in half, which made 5 cupcakes (not 6).  To make the brownie cupcake batter, start by melting 4 ounces of dark chocolate with half a stick of butter and 1/4 teaspoon of espresso powder (optional). Once melted, whisk in half a cup of sugar and a bit of salt.  Then whisk in eggs until combined.  Lastly, add 1/4 cup of flour and 2 tablespoons of sifted cocoa powder, then whisk until just combined. 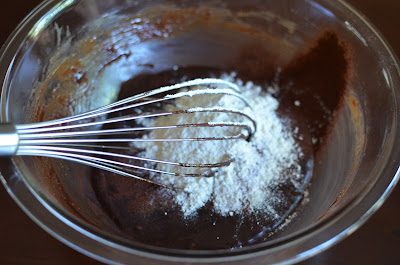 Spoon a heaping tablespoon of batter into each paper lined muffin tin.  I lightly sprayed my spoon so the batter would slide out easier.  Then gently press a small peppermint patty into the center of each. 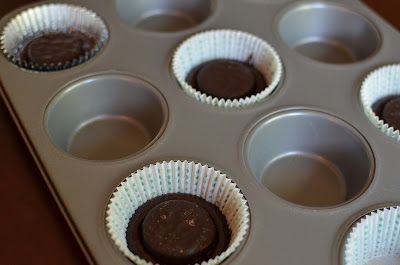 Cover peppermint patty with 2 more tablespoons of batter, spreading it around evenly.  As I mentioned, I didn't have enough batter to make a 6th cupcake.  Instead, I just divided up the remaining batter among the five. 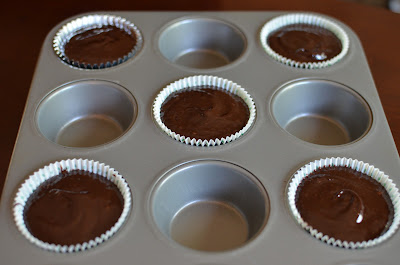 For me, these brownie cupcakes took about 25 minutes in a 350 degree oven.  The recipe suggests 35 minutes but check on them early if you want the center to be moist and fudgy.  Rotate the pan about halfway through baking and test the cupcakes with a cake tester or toothpick inserted above the peppermint patty.  It should have some moist batter crumbs attached to it.

I'd read about the potential for peppermint overflow so I wasn't too surprised when it happened to me.  Here's how they look right out of the oven. 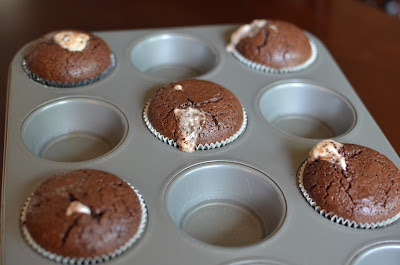 A little messy, right?  But as they cooled, some of the filling sunk back in and I neatened them up a bit by wiping/smoothing out the tops.  No big deal!  I think you'd have to make larger cupcakes to ensure that the filling doesn't seep out. 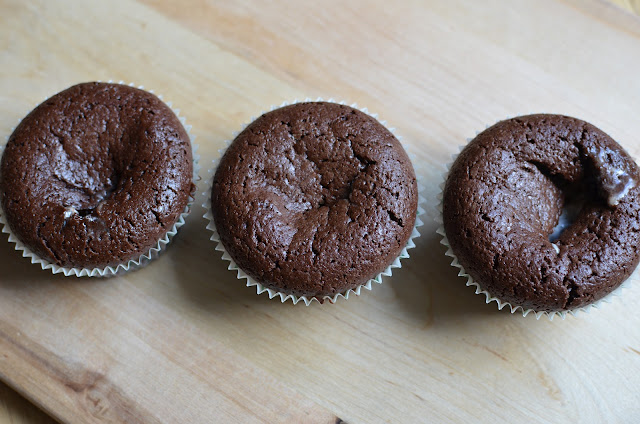 These are definitely fun and tasty, a nice brownie cupcake recipe even if you choose to omit the peppermint patty!  I loved that they kept well and remained moist inside for about 3 days in an airtight container. 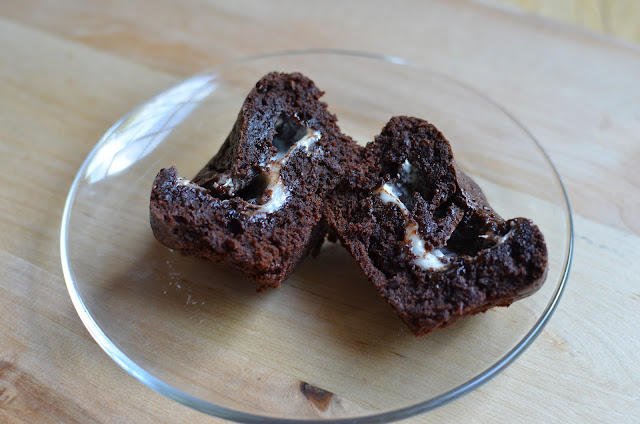 
Place chocolate, butter and espresso powder (if using) into a heatproof bowl set over a pan of simmering water.  Stir together until melted.

Remove bowl from the heat.  Whisk in sugar and salt until smooth.  Whisk in eggs until combined.  Lastly, add flour and cocoa and whisk until just smooth.  Avoid overmixing.

Spoon 1 heaping tablespoon of batter (it helps to spray the spoon lightly with cooking spray) into each paper lined cup.  Place a peppermint patty into the middle of each, gently pressing it down into the batter.  Add 2 generous tablespoons of batter over the top of the peppermint patty, spreading the batter around to make sure the patty is completely covered.

Bake, rotating tin halfway through, until cake tester inserted halfway - above the peppermint patty - comes out with just a bit of moist crumbs attached, about 25 to 35 minutes (mine were done at 25 minutes; check on them early to avoid overbaking so you have a moist brownie).  Transfer tin to a wire rack and cool before removing brownie cupcakes.

Store cupcakes in an airtight container at room temperature for up to 3 days.