With September and  the start of a new school year, I took a crack at making cheese crackers.  With any luck, I thought maybe I'd have a little homemade snack for the little guy to take to school... 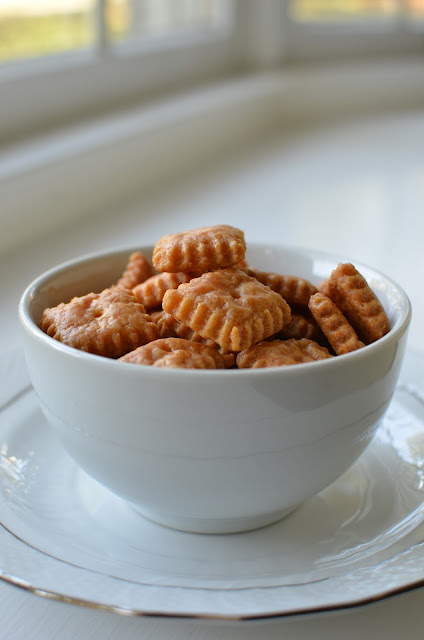 In a perfect world (if you're a mom who enjoys cooking/baking), these cheese crackers - like everything else you make - would be gratefully and enthusiastically received by your little one.  In reality, your little one might take his first bite, make a funny face, and say they don't taste a bit like the Cheez-Its that you tried to imitate! 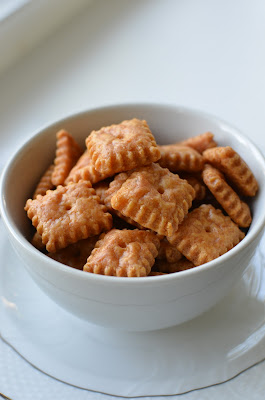 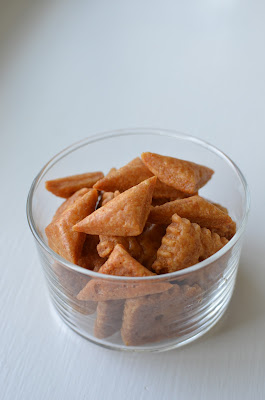 In retrospect, maybe it would've been wiser to cut these crackers into another shape so as not to set up expectations and comparisons.  But while the initial critique was harsh, I noticed these homemade cheese crackers quickly grew on the 7-year old food critic and he ate every single one I'd put into his bowl.  And for the following three nights at dinner, he managed to down quite a number of them (in fact, asking for more!) with both enjoyment and eagerness.  So, all in all, I actually think this venture was a success despite the rough start! 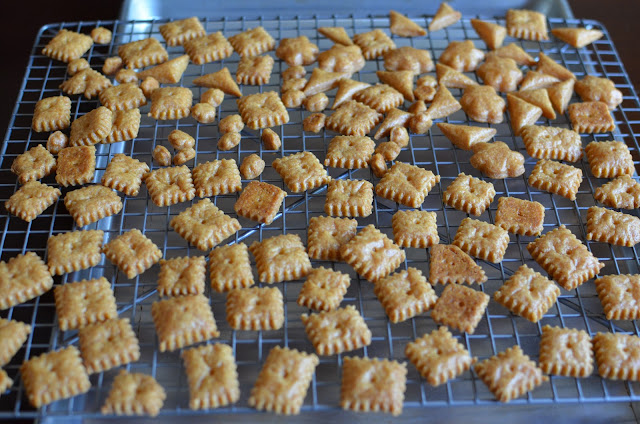 From an adult point of view, I thought these homemade crackers had amazing flavor - real cheese flavor that far surpassed the boxed/bagged variety.  I used a "Mammoth" sharp cheddar cheese from Wisconsin and since cheese is the predominant ingredient, the flavor of the one you choose really comes through.  They're more like cheese crackers or cheese straws you'd serve at a cocktail party than Cheez-Its, which is certainly not a bad thing!  My husband says they're addicting and I don't think he was just saying that to soothe my feelings after the aforementioned critique.

Texturally, my cheese crackers were crunchy but they could've been crisper, thinner (which is entirely "my bad").  I think that's where these came up short in my 7-year old's initial comparison of them against those Cheez-Its (which he likes but is not a particularly big fan of so maybe I was setting myself up).  Inevitably, I could've rolled the dough out thinner.  I say "inevitably" because I was mindful of this starting out (since I believe thinner=crisper in the case of crackers) but since I seldom take out my rolling pin, it's a challenge for me to get it just right.  I also think I lack patience for the art of dough rolling.

The bottoms of the crackers were quite crisp.  The crackers puff up in the oven and I found the tops of mine a bit denser and chewier than the bottom, but still very tasty.  Cheesy, salty flavor with crunch is an addicting combination. 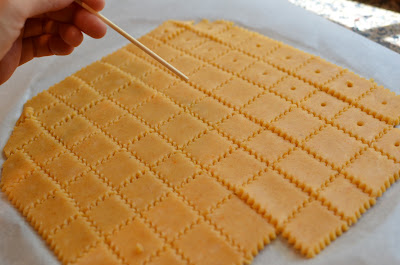 I really couldn't resist mimicking the Cheez-It shapes since it gave me a chance to use my fluted pastry cutter, which I bought over a year ago knowing I'd eventually find a use for it!

I also used some small flower shaped cookie cutters I have on hand.  The little ones would make excellent croutons on top of a bowl of tomato soup (and if you live in New York, Bouchon Bakery makes an excellent one)!  For whatever reason, I liked the look of the little triangle shapes best, and I did notice the thinner crackers from the edges of my dough were crisper. 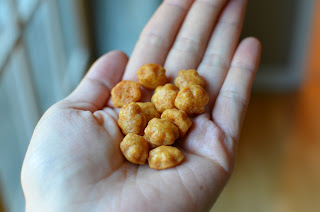 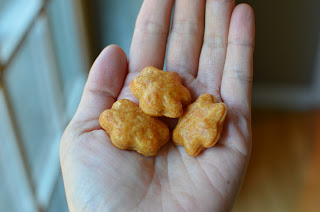 So these crackers didn't end up as a school snack for the little guy as I initially envisioned but the effort wasn't for naught.  We really did enjoy eating these at home for a few nights, and I am glad I gave this project a try. 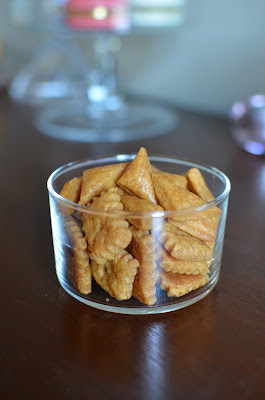 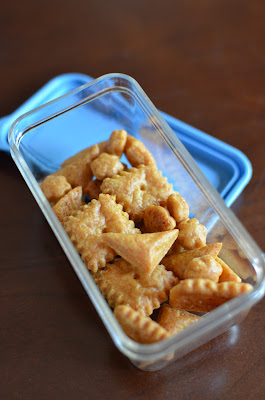 I adapted the recipe I used from a few that I found online.  Overall, the cheese cracker recipes I looked at are all very similar.  Mostly, we're talking about a good dose of cheese, some butter, flour, and a bit of seasoning.

Start by grating 8 ounces of cheddar cheese.  The little guy and I found a "Mammoth" sharp cheddar from Wisconsin that we used for this.  You could get adventurous and use a white cheddar or even a different kind of cheese. 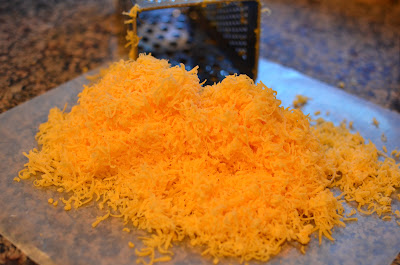 I like using a food processor to make this kind of dough that involves cutting in cold butter.  I used a combination of all-purpose flour and white whole wheat flour for this recipe - half a cup of each.  Add that, along with 3/4 teaspoon of salt, and 1/4 teaspoon of paprika to the food processor and give it a few pulses to combine the dry ingredients.

As for seasonings, I used a little paprika that I have around the house for just a little jazz in the background.  I like that paprika is not too spicy (for kids).  I've seen recipe that use a bit of black pepper, cayenne, and dried mustard powder.  You could even add a dried herb that makes sense to you. 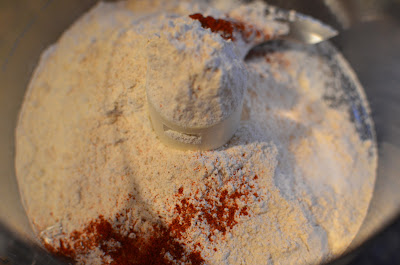 Add 4 tablespoons of unsalted butter that's been diced into small pieces.  Pulse together until the mixture looks like coarse meal. 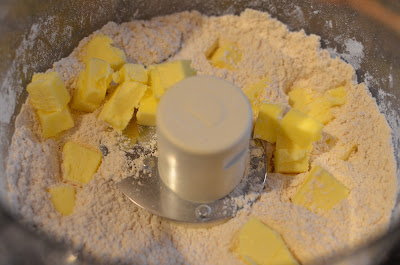 Time to add the cheese, in a few installments, until incorporated and the mixture looks again like coarse meal. 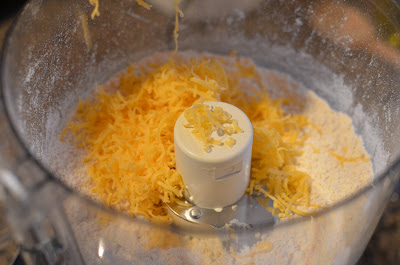 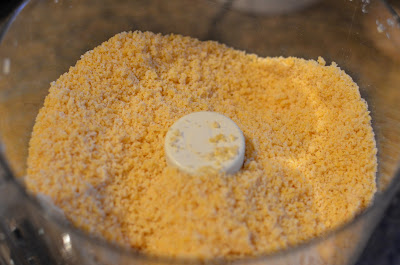 Like pie dough, use cold water to bind the dough together.  It should take 2-4 tablespoons.  Pulse in a tablespoon at a time and stop when the dough combes together and forms a ball. 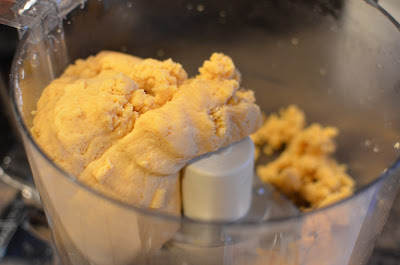 Wrap the dough in plastic wrap, formed into a round disk shape.  You might actually want to separate the dough into 2 pieces and wrap them separately.  I chilled mine in one piece but ended up separating it, rolling about 3/4 of the dough first and the rest in a second batch just to make it easier and have more space.  Chill the dough for an hour, or overnight (like I did).

Take the dough out of the refrigerator and let it sit until just softened enough to roll out.  Roll the dough to a 1/8 inch thickness (or even slightly thinner) - this is very important because thinner means the crackers will come out crisper.  Mine could've been rolled out thinner (pay close attention to the center, which may be thicker than the edges). 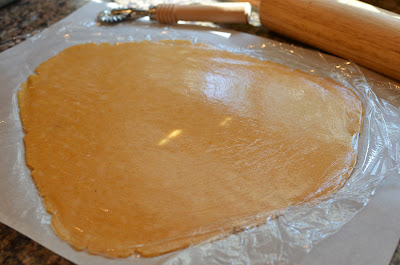 I found that rolling the dough out between a piece of parchment paper and plastic wrap works very well.  I like being able to see the dough clearly with the plastic wrap on top. 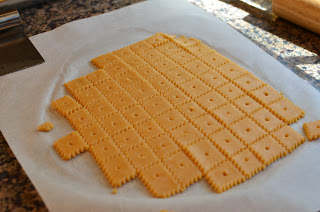 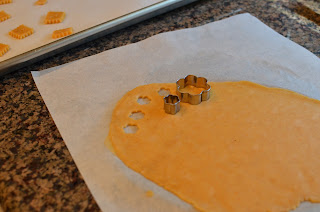 Time permitting, I recommend chilling the cut dough in the refrigerator for about 20 minutes or so before baking, particularly if it is hot in your kitchen.  Cold crackers should bake up crisper and will retain their edges/shapes better. 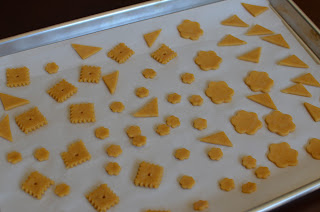 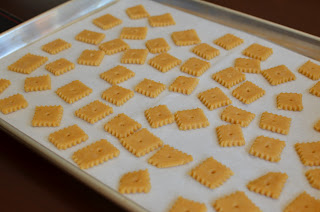 Bake in a 350 degree oven for about 20 minutes, rotating the baking sheets halfway through.  The crackers are done with they are golden brown and the bottoms are crisp.  Keep an eye on them early and check the bottoms to make sure they are not over browning, or worse - burning. 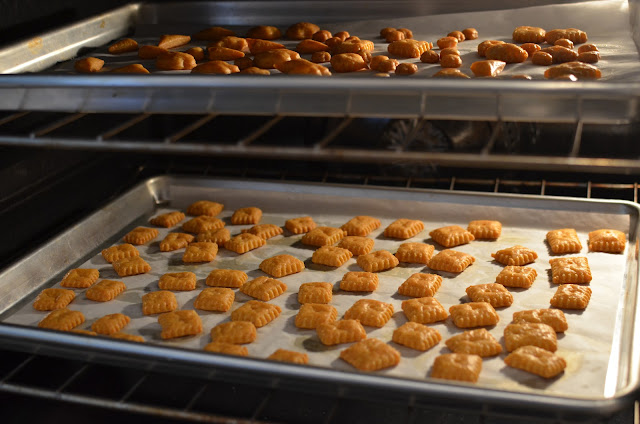 * Now a tip I picked up from 101 Cookbooks' recipe is to leave the crackers in the oven, turned off, with the door propped open with a wooden spoon, for at least 20 minutes.  I think this way of letting the crackers dry out helps them retain their crispness for a couple of days.  I think it really worked!  My crackers tasted essentially the same even after 3 full days stored in an airtight container.

Once you remove the crackers, let them fully cool before storing in an airtight container.  I loved opening up the jar and taking a whiff of that cheesy goodness.  Three nights later, we munched on the last of them, without the need to re-crisp them in a warm (about 250 degree) oven though you could try that if you want to refresh them.

Homemade Cheese Crackers
Adapted from this recipe from Home Cooking In Montana I found via theKitchn, 101 Cookbooks, and the Baked blog

- Yields many dozens (I didn't count), depending on size and shape you choose -

Add water, a tablespoon at a time, and pulse until the dough comes together into a ball.  Remove the dough from the food processor.  Wrap dough in plastic wrap, forming it into a flat disk (you can also separate the dough into 2 disks).  Chill for at least an hour or overnight.

Rolling and baking: Remove the dough from the refrigerator and let it sit at room temperature until softened just enough to roll out.  Preheat oven to 350 degrees and line 2 baking sheets with parchment paper.

Roll the dough out so that it is 1/8th of an inch or thinner (thinner=crisper).  I(I rolled the dough out between a sheet of parchment paper on the bottom and plastic wrap on top.)  Use a knife, pizza cutter, or fluted pastry cutter to cut 1 inch squares.  If desired, use a skewer to poke a hole in the center of each cracker.  Alternatively, you can cut other shapes using a knife or small cookie cutters.

Place cut crackers onto the baking sheets.  Refrigerate the cut crackers for about 20 minutes.  This helps them bake up crisper and maintain their shape during baking.

Bake until crackers are golden brown and crisp at the bottom, roughly 18-22 minutes.  Rotate the pans halfway through the baking time and begin checking on them early to avoid over-browning or burning.

Turn off the oven and leave the crackers in the oven for at least 20 minutes, with the oven door propped ajar using a wooden spoons.  This drying process helps them retain the crispy texture.

Remove from the oven and cool completely on a cooling rack.  Crackers can be stored in an airtight container for about 3 days.