Unexplained cravings for a cinnamon roll

Ask my husband and he'll tell you that a couple of months ago, I had this unexplained craving for a cinnamon roll.  That might not sound all that unusual in itself but coming from me, it is.
I'm usually not a particular fan of them and I've never craved one before.  While a fresh batch sure smells enticing, I'm not really one for sweet rolls or sugary icing (as hard to believe as that may be). And as we're talking about cinnamon rolls, I'm not altogether a big fan of the spice itself.  Don't get me wrong - I like a little cinnamon tucked into a banana muffin or blended into some knockout spiced cookies but I'm not a fan of it in abundance (I really dislike it when a cappuccino arrives at the table dusted with cinnamon).  That said, I was craving cinnamon rolls!  I tried to ignore, then resist, the urge but a couple of months passed and I was still craving one so you know how this story had to end.
I still can't figure out exactly why I started craving a cinnamon roll but I think I can place some of the "blame" (or I should say, "credit") on all the good-looking cinnamon rolls I saw on many of the food blogs I like to visit.  Because right around the time I noticed this craving, I seemed to see them pop up here and there on my screen.  Coincidence?  I think not...
So I had to get baking!  There are 3 of us at my house so I really needed a small batch recipe because I'm thinking that having a dozen or so cinnamon rolls around might not be a wise idea. Luckily, I found a small-batch recipe (that makes 4) from Oh, Ladycakes.  I used that as the basis for my first batch of cinnamon rolls but made a few changes along the way.

The recipe, like the focus of the blog itself, is vegan and since I'm not, I used the conventional counterparts (i.e., butter and milk).  From there, I took a little inspiration from this Joy the Baker-Pioneer Woman cinnamon roll mashup (love that video of them making the rolls together) and filled mine with a combination of sugar, orange zest, and dark chocolate.  Of course, there's cinnamon since it is a cinnamon roll after all, but I used a light hand.  Once baked, I topped the rolls with a simple orange glaze of confectioners' sugar and fresh orange juice. 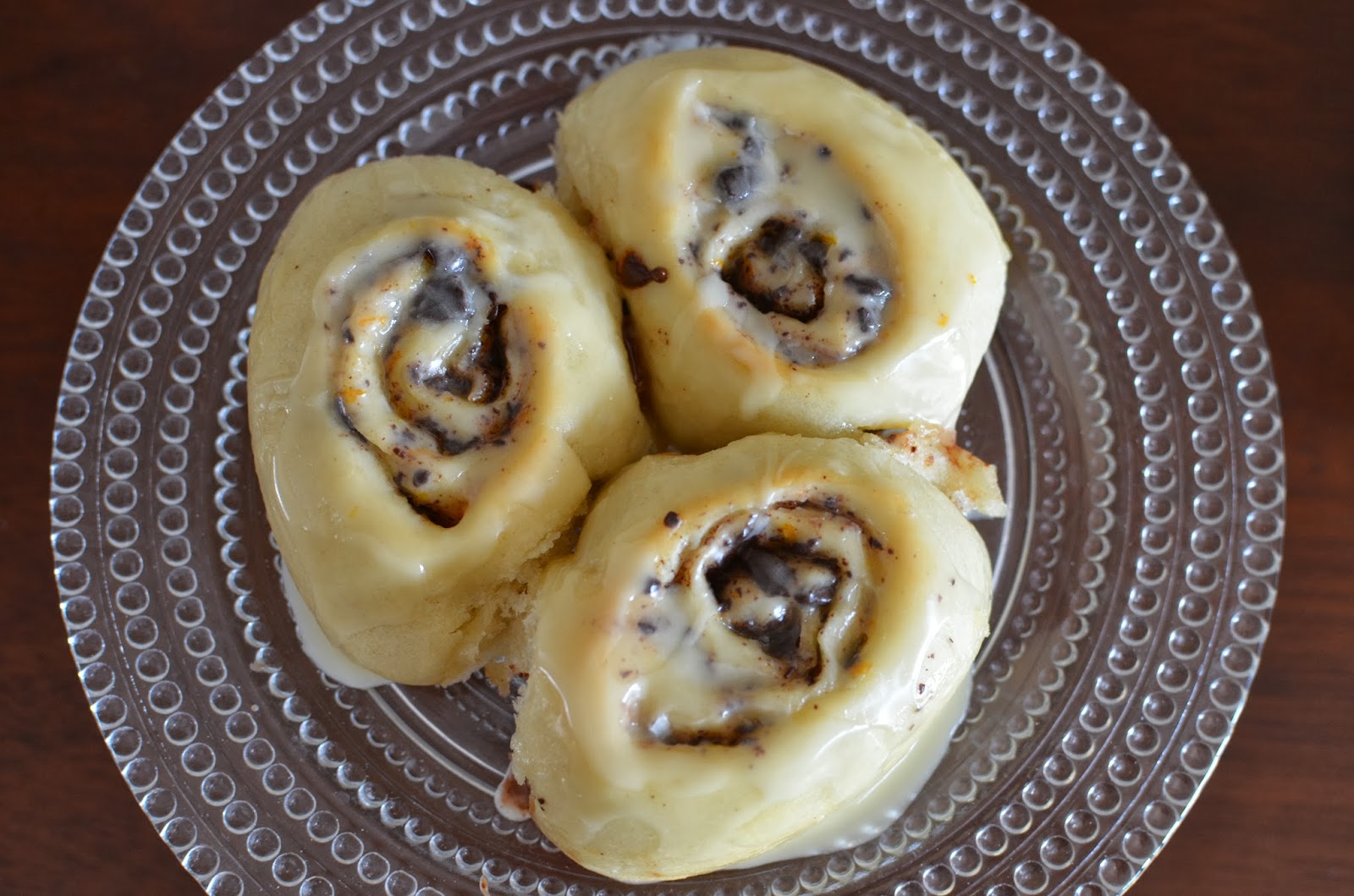 Even a cinnamon roll novice like me knows you have to eat them fresh and warm from the oven.  I prepped the rolls the night before, stopping and refrigerating them at the point where the rolls were sliced and placed into the pan.  The next morning, I removed the pan from the fridge, placed it in a warm spot for a little over an hour for a final rise before baking.  With that, we had warm cinnamon rolls for our Saturday morning breakfast!  I sat down, sank my teeth into it, and finally satisfied my craving for a cinnamon roll.

I'm starting to really enjoy working with yeast because the results are little bit like magic.  These rolls turned out so soft - amazingly soft and pillowy. They were just squishy and squidgy in the best possible way!  How did that happen?  I'm not really sure but I'm happy for it.
I had fun making these; every time I think about it, it puts a smile on my face for some reason.  And eating the rolls was a fun weekend breakfast treat. The super soft, tender texture of the cinnamon rolls really stood out.  Once we sunk into that soft doughy bun, we tasted sweetness, chocolate, and a big pop of orange flavor.  These make a great occasional treat and I say if you're going to eat cinnamon rolls, you're far better off making them at home and determining/knowing exactly what you put into it.

What an awesome craving this turned out to be!  And while it's satisfied for now, I wouldn't be at all surprised if I'm hit with another craving for one of these cinnamon rolls one day soon. 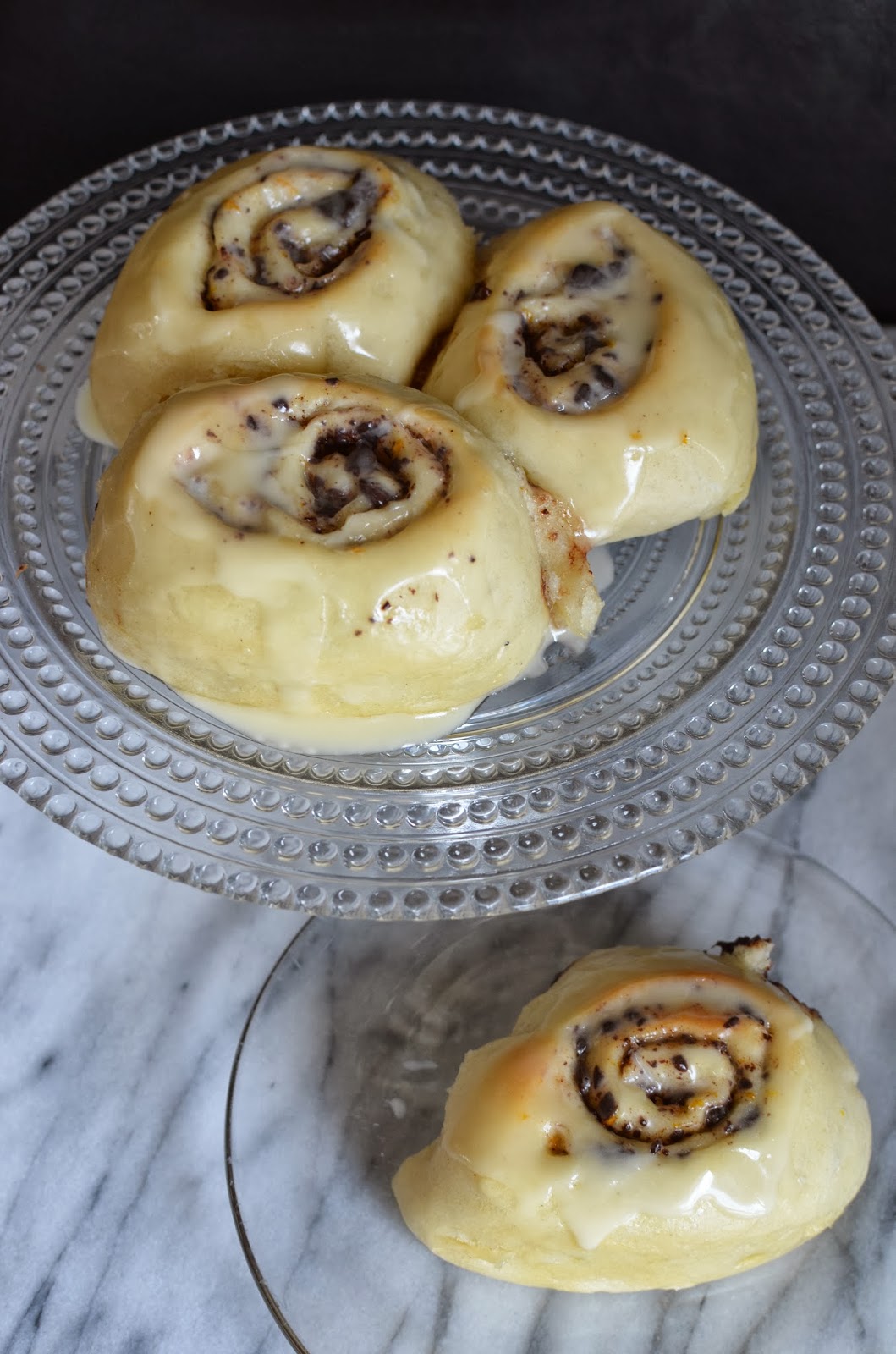 - Makes a small-batch of 4 cinnamon rolls -

In a small bowl or measuring cup, lightly stir yeast into the warm water.  Add a pinch of sugar, cover, and set aside until foamy, about 10-15 minutes.  If the mixture does not foam after that time, you will need to start over.

In a large mixing bowl, combine the flour and salt.  Make a well in the center and add both the yeast and butter mixtures.  Stir with a wood spoon until dough comes together, then remove from the bowl and knead with your hands for 4-5 minutes.  Transfer the kneaded dough to the prepared mixing bowl, cover with plastic wrap, and place in a warm spot until doubled, about 45 minutes (or more).

Turn the dough onto a lightly floured surface and roll or pat/press the dough into a 5x10 inch rectangle (I rolled the soft, pliable dough out between parchment paper and plastic wrap).  Spread the softened butter over the dough, top with mixture of sugar-orange zest, dark chocolate, and cinnamon.  Starting at the short end, tightly roll the dough, trim off the ends, and slice into 4 even pieces.  Place rolls into the prepared cake pan and place in a warm spot to rise again until doubled in size, about 30-60 minutes (60 minutes being optimal).  [Do ahead: Once the rolls have been sliced and placed in the pan, cover and refrigerate overnight.  In the morning, remove the pan from the refrigerator, set it in a warm place to rise again - this may take a bit more than an hour - and bake.] Bake in a 375 degree oven for 12-14 minutes until rolls are lightly browned on top.

Let rolls cool for 10 minutes in the pan.  In the meantime, whisk 1 tablespoon of the orange juice and the vanilla extract into the confectioners' sugar.  Add additional juice, as needed, to reach a thick yet spreadable consistency.  Top glaze over the rolls and serve immediately, while it's still warm.