I started sitting down to write this post right after I just ate the last piece of this cake. I think the overriding thought I have is that a little dessert - a little something sweet - just makes the day a bit better. 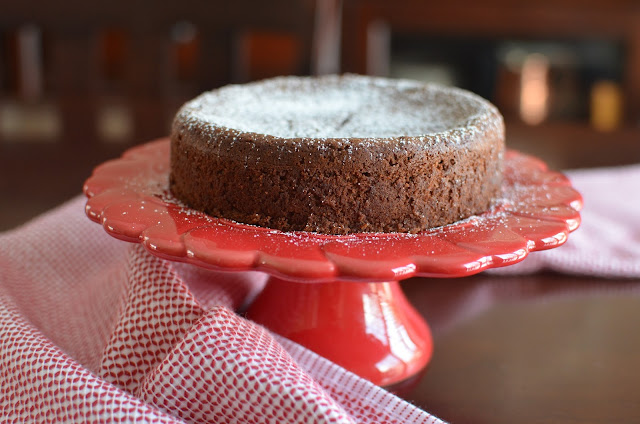 So since it's February and Valentine's day is circled in red on the calendar, and more importantly, because chocolate is a beautiful part of my everyday life that I wouldn't want to live without, let's make and savor another chocolate cake and make life just a touch sweeter. At this point, I think I've established the basis of my favorite things so this is going to sound familiar.  This small 6-inch cake is essentially a flourless chocolate cake (a cake we adore that I most recently made a couple of weeks ago after realizing I'd neglected it for too long), with the addition of chestnut cream.

The chestnut cream lends extra moisture and adds a sweet nuttiness that I love.  It makes the cake a bit heftier or denser compared to a regular flourless chocolate cake, in a wonderful way by giving it a satisfying mouthfeel.  The texture is very smooth and velvety, with a creaminess that has substance to it. 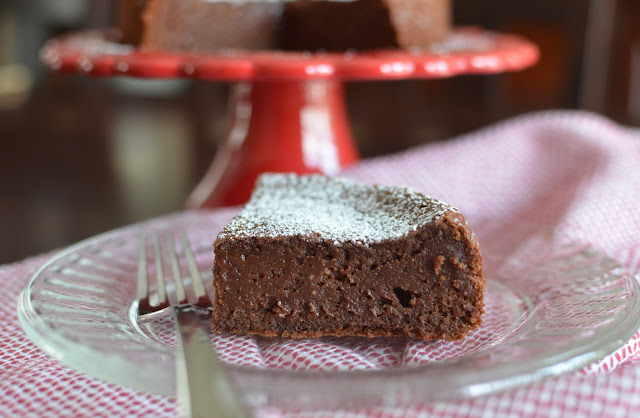 I know I like to find all sorts of ways to bake with chocolate and chestnut cream and, in fact, I made a very similar torte two Christmases ago using a recipe that started with chestnut puree (something I accidentally bought and wasn't at first sure what to do with) rather than chestnut cream.  This cake, using chestnut cream, is even easier to make!  And since I have plenty of chestnut cream on hand, this little cake will not be a stranger in my house.  In fact, I may not divide the recipe in half next time to make just a 6-inch version; it's definitely special enough for a dinner party. 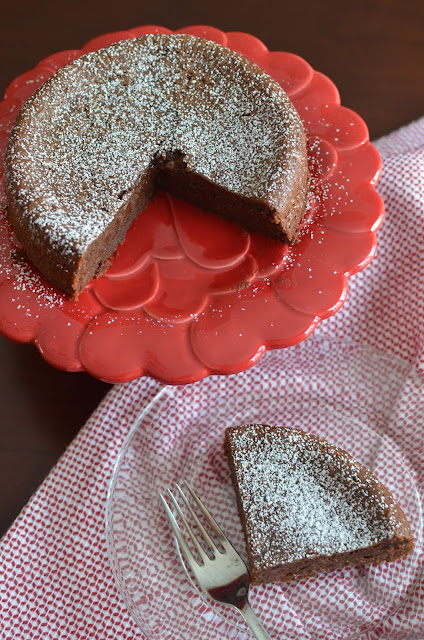 I was looking for a simple, familiar recipe for chocolate-chestnut cake and settled for this one that's essentially a flourless chocolate cake recipe with the addition of chestnut cream.  It only involves a handful of ingredients, which is a big lure for me. 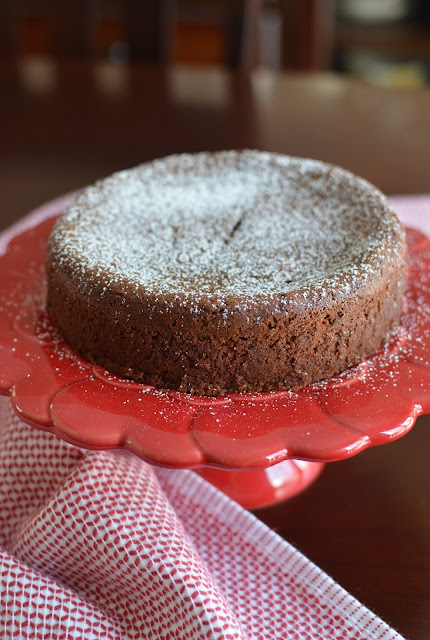 I adapted the recipe slightly, first dividing it in half to bake in a 6 inch (rather than 8-inch) pan.  I rounded down the amount of butter and rounded up the amount of chocolate in the recipe and added a splash of vanilla extract.  You could also flavor it a bit further with a little rum if you like.

You might notice that the recipe does not call for sugar.  The chestnut cream provides plenty of sweetness so it's not needed.  Just bear in mind that without sugar to stabilize the egg whites, be careful not to over whip the egg whites (I did it by hand in a large bowl, and this gave me better control over it) or it will become dry and separate; that makes it hard to fold the whites into the batter and it won't do its job of lifting the cake and lightening it the way you want. 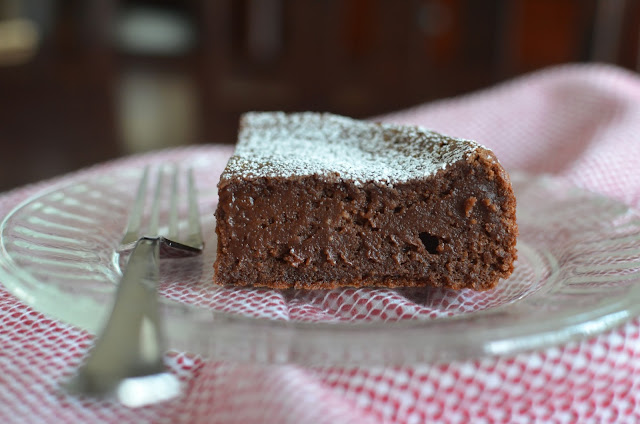 The moist, fudgy, sweet chocolate-chestnut cake is perfect with just a dusting of confectioners' sugar (or unsweetened cocoa powder) and really doesn't need anything else with it.  I have to say it tastes like Christmas to me though I'm using Valentine's Day as an excuse!  It's not too heavy or as rich as it might look so consider doubling the recipe below and baking an 8-inch cake instead.  It's also the kind of cake that holds well for a few days. I like to store it in the refrigerator and just set it out to sit at room temperature for a bit before serving.

Happy February!  I think it's going to be a sweet month for us all.

Preheat oven to 350 degrees.  Butter a 6-inch round cake pan (I used one with removable sides but it's not mandatory) and line the bottom with a round of parchment, lightly greasing the paper.

Place chocolate and butter in a heatproof bowl set on top of a pan of just simmering water.  Stir until melted, then remove from the pan and let cool slightly.  Then stir in the chestnut cream, vanilla extract, and egg yolks.

In a large bowl, whisk the egg whites with a pinch of salt until it just reaches stiff peaks (be careful not to over-whip the whites or it will separate).  Fold 1/3 of the egg whites into the chocolate-chestnut cream mixture to lighten the batter.  Then fold it the rest until just incorporated.  Transfer batter into the prepared cake pan, smoothing over the top.  Bake until cake is just set, approximately 30 minutes.

Let cake cool on a baking rack before removing from the pan.  Dust the top with confectioners' sugar.