When I lived in Brooklyn and went to school and worked in New York, one of my favorite things to do was to go eat at some of the amazing restaurants in the city.  We'd grab that annual Zagat and check out the list of most popular restaurants and decide which we really wanted to try.  Now that I have a child and moved to the burbs,  we don't get to do this very often but we still love to eat out locally and do so a lot.

I think one of my first visits to one of these "fancy" New York restaurants was when I was about 17 or 18 years old.  My brother took us (that would be me, my then boyfriend/now husband, and my sister) to Gotham Bar & Grill.  I hate to date myself but that was roughly 15 years ago and this restaurant is still extremely popular today.  I remember almost everything I ate that day.  I had a leek soup with a dollop of goat cheese on top (I'm not sure I'd ever had goat cheese until then), seared cod with some kind of potato puree, and this deliciously decadent warm chocolate cake.  We still reminisce about that meal today.  And fast forward all these years later, my brother, sister, and I try to get together every 6-8 weeks or so for a siblings' night out to eat and chat.  We love to eat and hang out together.

When I make this flourless chocolate cake, it reminds me of that warm chocolate cake I had at Gotham Bar & Grill.  I know I'm supposed to be playing with flour in the kitchen but we won't take that too literally. 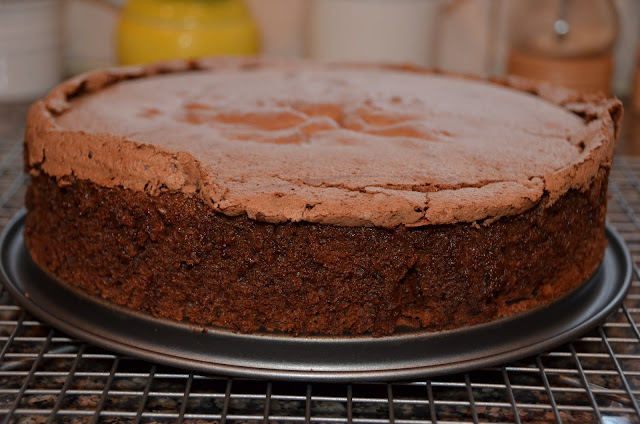 The warm chocolate cake served at Gotham Bar & Grill is similar to this one in that they're both flourless.  Both are essentially all about the chocolate and that lofty texture that melts in your mouth from the whipped egg whites.  But this one that I often make at home is quite simple and quick in comparison to the restaurant version.  I know this firsthand because my husband recently gave me a present of a cooking class in the city, where the theme was recreating "Great New York Restaurants' Signature Dishes".  Gotham's warm chocolate cake was the dessert so now I have the recipe and got a chance to help make it in class.  I can tell you that the restaurant cake is far more rich and decadent, and involves working with both egg whites and whipped cream, as well as baking in a water bath and chilling for hours after baking before re-heating it back up before service.  It is a lot of work!  I took pictures of the dishes we made at this class but I regret not taking one of the cake....I was too busy devouring it (plus, I didn't realize then that I would be starting this blog/journal).  While the cake was delicious, it isn't something I could eat everyday and I think is probably best reserved as an indulgence at the restaurant.

This flourless chocolate cake I make at home only requires 4 ingredients so I often make it when I'm in the mood to bake something and it's one of my husband's favorites.  It's basically just chocolate, eggs, butter, and sugar but you'll need a springform pan.

Start by melting 8 ounces of semi-sweet or bittersweet chocolate with 6 tablespoons of butter.  I add a bit of instant espresso powder to heighten the chocolate flavor but that is totally optional.  The dense mixture becomes silky once you whisk in 6 egg yolks you've separated to the cooled chocolate. 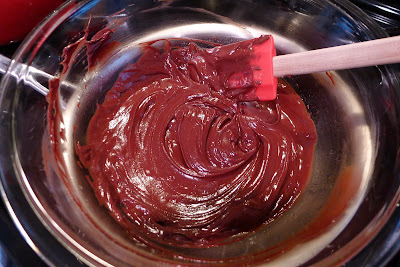 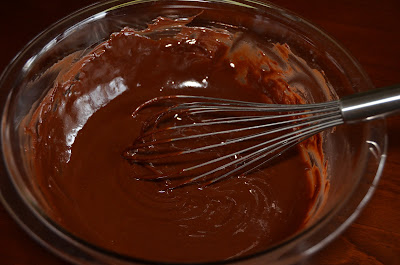 Egg whites are the critical components to this recipe, providing all the lift and substance to your cake in the absence of flour.  Take 6 egg whites and start whipping them in a stand mixer (having your egg whites at room temperature will help them whip up more easily).  Once it reaches soft peaks, I start adding half a cup of sugar gradually, and whip it to stiff peaks.  I try not to over whip the egg whites (something I tend to do) since it will likely leave your cake with a few little specks of egg white inside.  It doesn't taste bad but it also doesn't look too good. 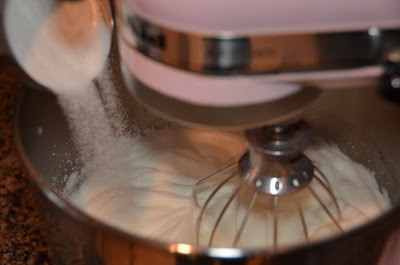 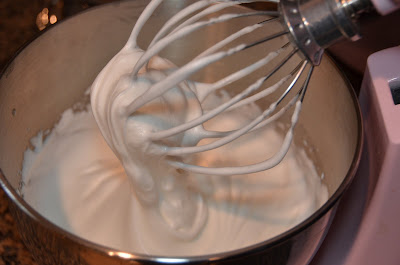 My favorite part is when the egg white mixtures meets the chocolate.  You add a quarter of the whipped egg whites to the chocolate to introduce them to each other. 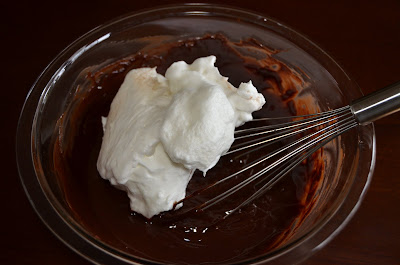 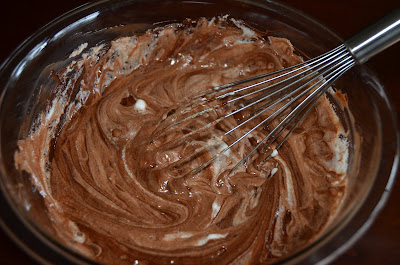 Then you can add this chocolate mixture to the rest of the egg whites.  Fold in gently since you don't want to deflate the whites too much. 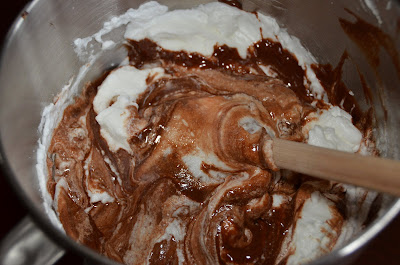 This cake bakes slowly at a low 275 degree oven for about 50 minutes. 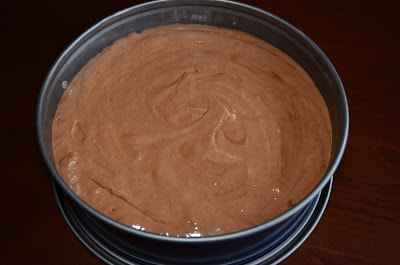 The cake puff up while baking but within moments out of the oven, it deflates somewhat.  You get this slightly crisp, almost brownie-like, top while the texture is creamy and smooth in the center.  It's not too sweet and just disappears in your mouth. 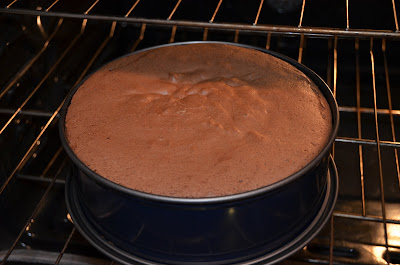 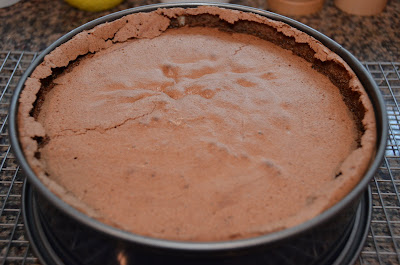 Still a little bit warm and gooey, we couldn't wait any longer to dig in.  You can dust a little confectioner's sugar on top but I like a little unsweetened cocoa powder.  If you have some heavy cream around, it's fun to make a little whip cream by hand and serve it up alongside.  It's also great all on its own. 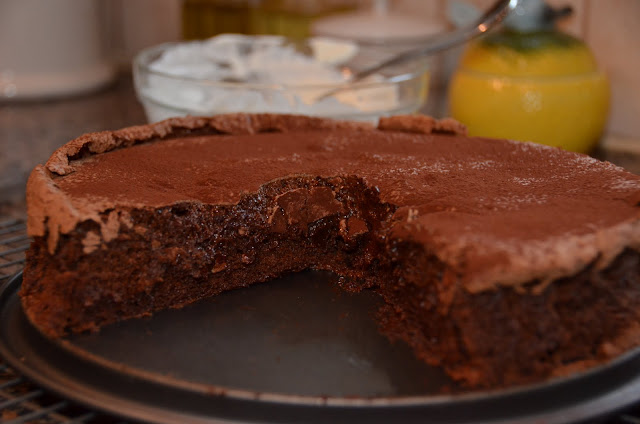 I've been talking about this little blog with my five-year old and when he was eating a piece of this cake, he asked me if he could put a comment on my post.  He said he would write that he loves this cake!  How cool is that. 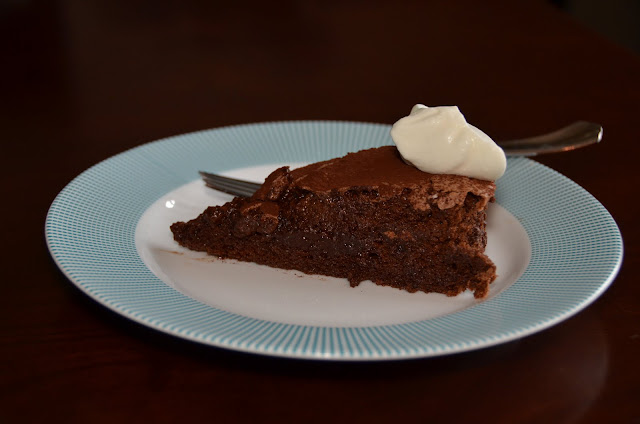 Update:  I just wanted to show you how the cake looks when it's a bit more set up. 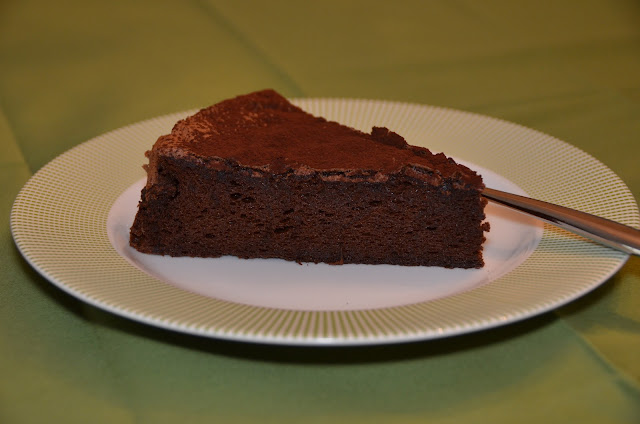 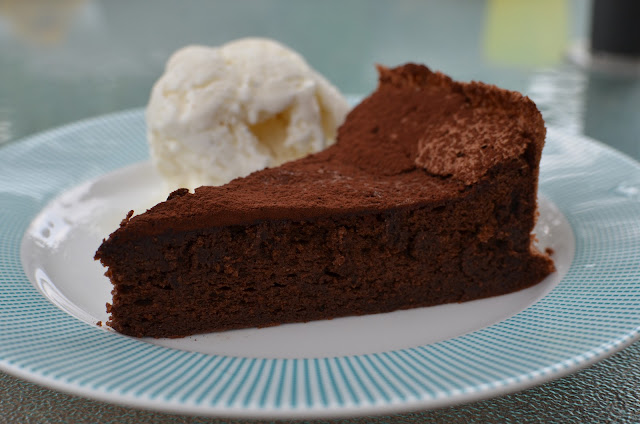 Update #2 (June 9, 2013) - Try this cake cold!  I've made this cake many, many times and it's a family favorite but, for some reason, I never thought to try it cold, straight out of the refrigerator.  I usually keep the cake at room temperature and even if I refrigerate it, I bring it back up to room temp before eating.  This past weekend, my husband and I were having a quick lunch together and I had 2 slices of this cake left over in the fridge.  He mentioned that he wouldn't mind having a slice and, long story short, since we were short on time, I suggested trying it cold.

Right out of the refrigerator, the cake tastes a little fudgier and more decadent - more truffle-like - than at room temperature.  It's a toss-up as to which way is "better" but I certainly would not mind a cold slice!

Preheat oven to 275 degrees and place an oven rack in the middle of the oven.  Butter a 9-inch springform pan.

Place chocolate, espresso powder (if using), and butter in a heatproof bowl set over a pan of barely simmering water.  Stir occasionally until melted.  Cool the mixture slightly.  Whisk in egg yolks.

In the bowl of a stand mixer, beat egg whites with the whisk attachment until soft peaks.  Gradually add sugar and whip until stiff and glossy.  Whisk 1/4 of the whites into the chocolate mixture to lighten.  Then, gently fold in the remainder of the egg whites.

Pour batter into the prepared pan, smoothing the top.  Bake for about 45-50 minutes until cake pulls away from the sides of the pan and the center is just set.  The cake will have puffed up.  Remove from the oven and let cool completely on a wire rack.  The cake will deflate as it cools and you'll have a crackly, crisp top and moist center.