My newly acquired addiction to homemade cinnamon rolls continues.  A year ago, I discovered that small-batch cinnamon roll recipe and I've been hooked on making cinnamon rolls ever since!  After that first sweet combination of chocolate and orange, I went on to make that crazy-delicious almond version and now, I made rolls with a Nutella and hazelnut filling. 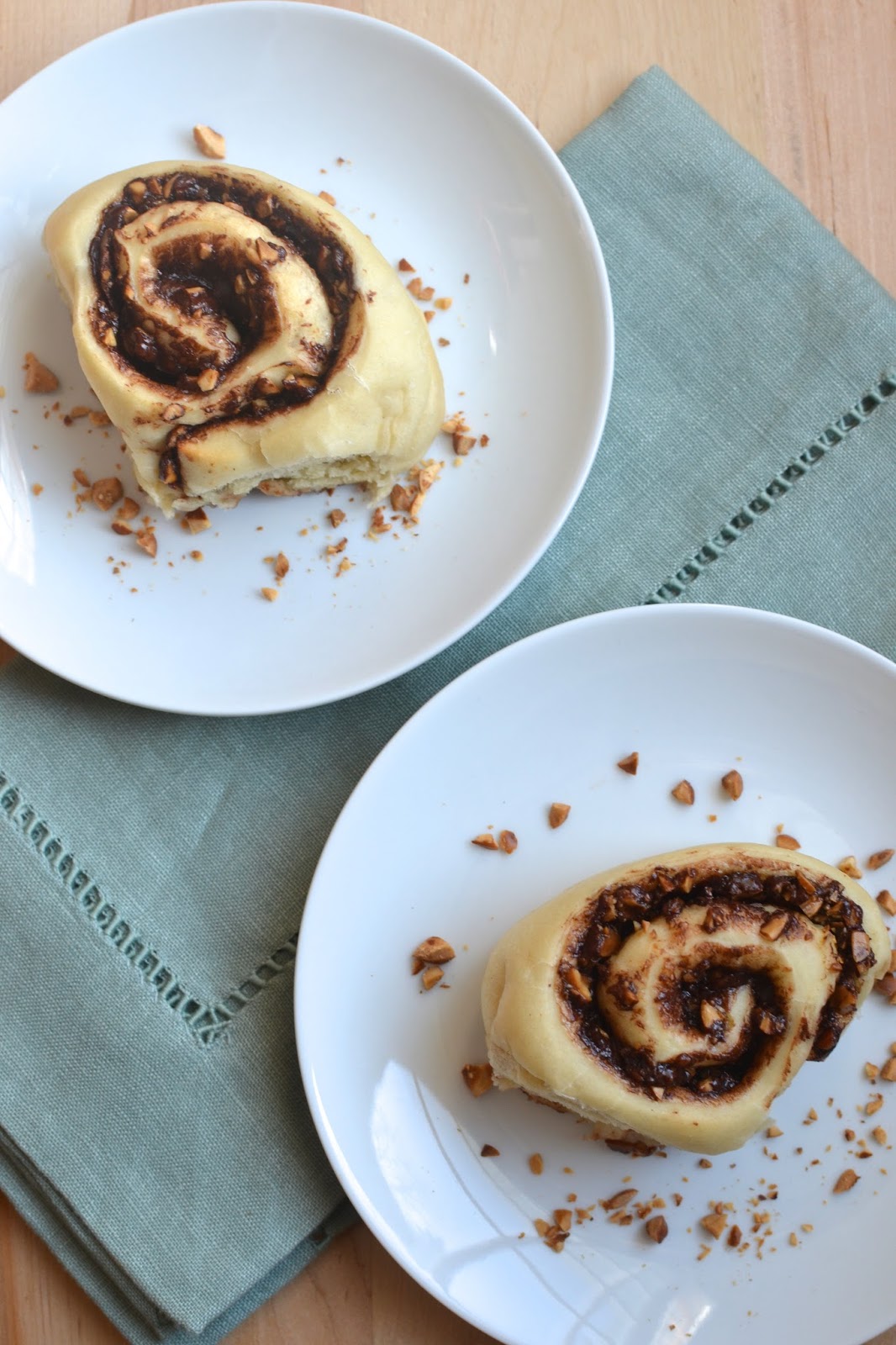 This was inevitable.  I've been thinking about possibilities as far as fillings for this deliciously soft and squishy cinnamon roll dough ever since I first made and tasted it, and Nutella would always pop into my head.  It's just too easy and tasty.  Now it's done and I can be so happy that I made them.  Seriously, what a treat!

I think if you love Nutella like we do, I need not explain why these rolls were so good. But I have to give props to the cinnamon roll dough itself, a small-batch recipe for 4 rolls that I adapted from Oh, LadyCakes (who I can't thank enough for this, no matter the impact on our waistlines).  It makes for such wonderfully soft and tender rolls that are like warm edible pillows encasing whatever sweet fillings you tuck inside! I feel like I have an ideal canvas to play with.
In this case, it was Nutella and chopped hazelnuts, along with a dusting of cinnamon. It couldn't be easier.  I'm crazy for nuts and a little texture in my desserts so I added toasted hazelnuts to give the rolls a contrasting texture as well as a nutty flavor.  The cinnamon brings a hint of spice in the background.  All in all, this filling couldn't be simpler and it's honestly getting altogether too easy to make cinnamon rolls to enjoy warm and fresh on a weekend morning! 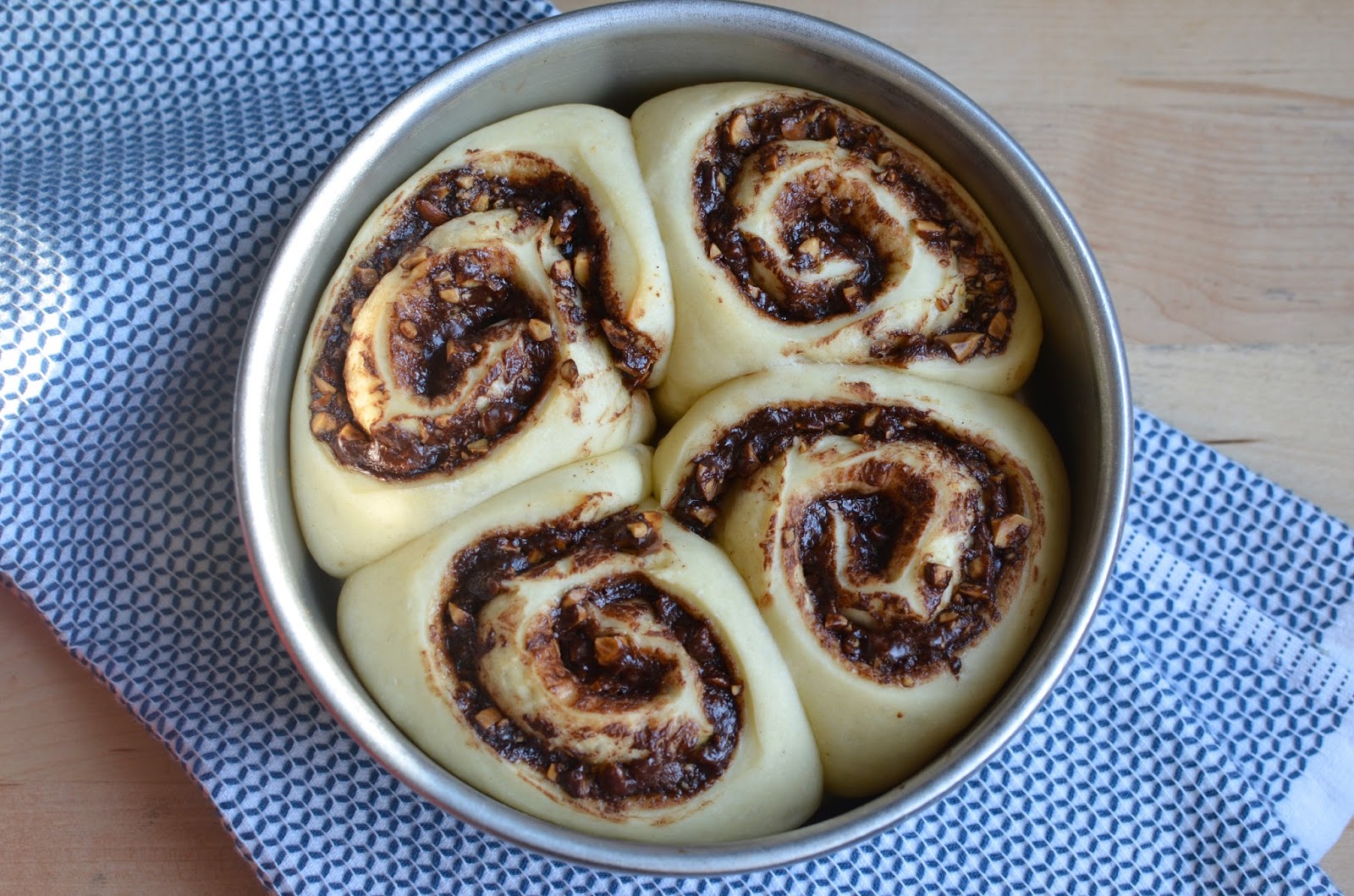 Given how delicious these are, we are more than happy to indulge.  After a long week, this is the treat to start the weekend morning off right.


Is it possible that I considered myself someone who didn't like cinnamon rolls a year ago?!  Finding this cinnamon roll recipe and learning to make them at home has changed everything.  Though I still have no craving for them outside of the house, the urge to make and enjoy them at home is always lurking!  And when I can customize them to the flavors I love, all bets are off and I have a feeling other versions are yet to come... 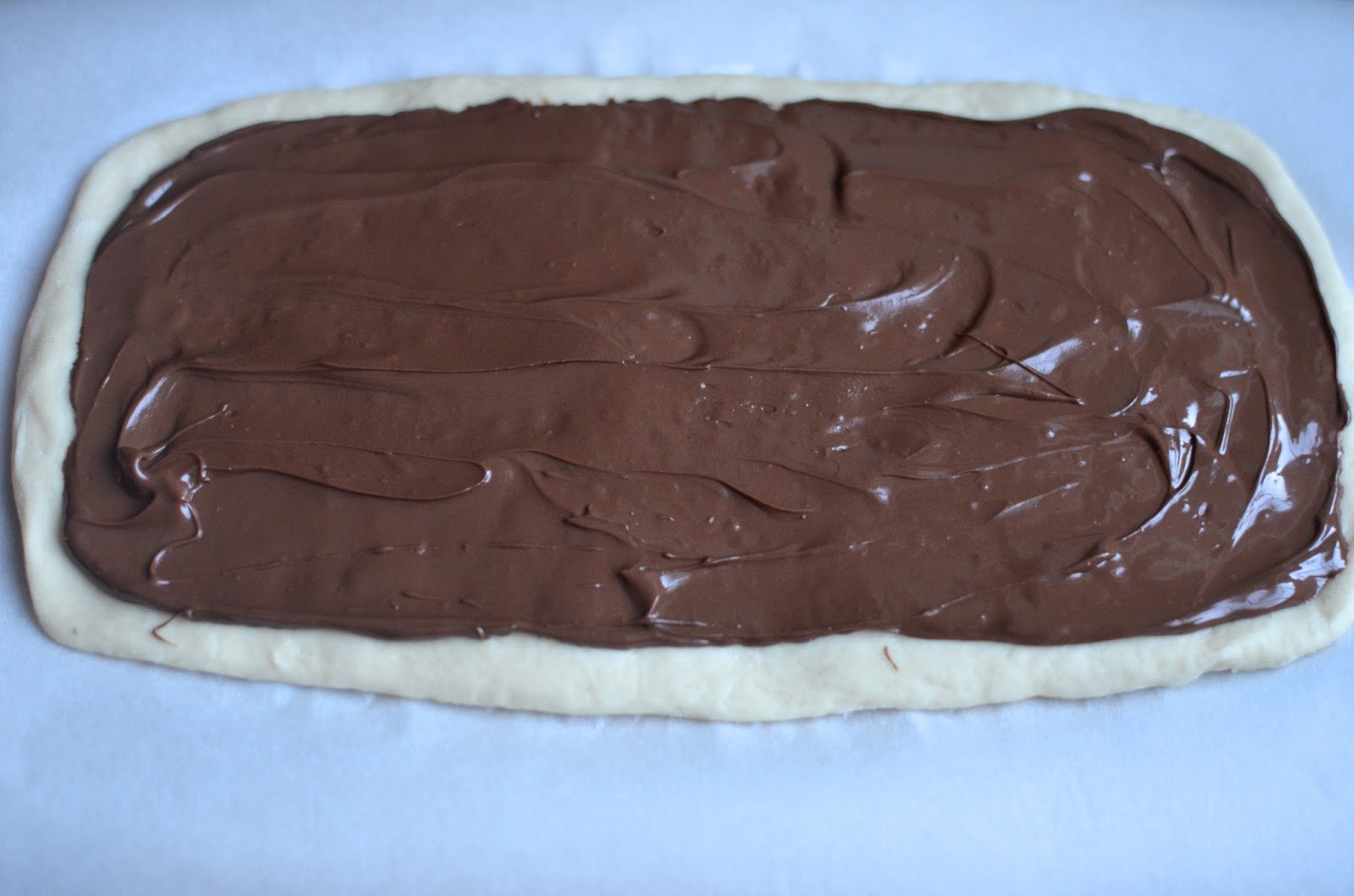 So this recipe makes 4 rolls.  I slathered the 5x10 inch rectangle of dough with 1/4 cup of Nutella chocolate-hazelnut spread.  I've been eating this stuff forever and I always have some, along with peanut butter, in the kitchen.  I find that warming the Nutella for just about 10 seconds loosens it perfectly to spread easily. 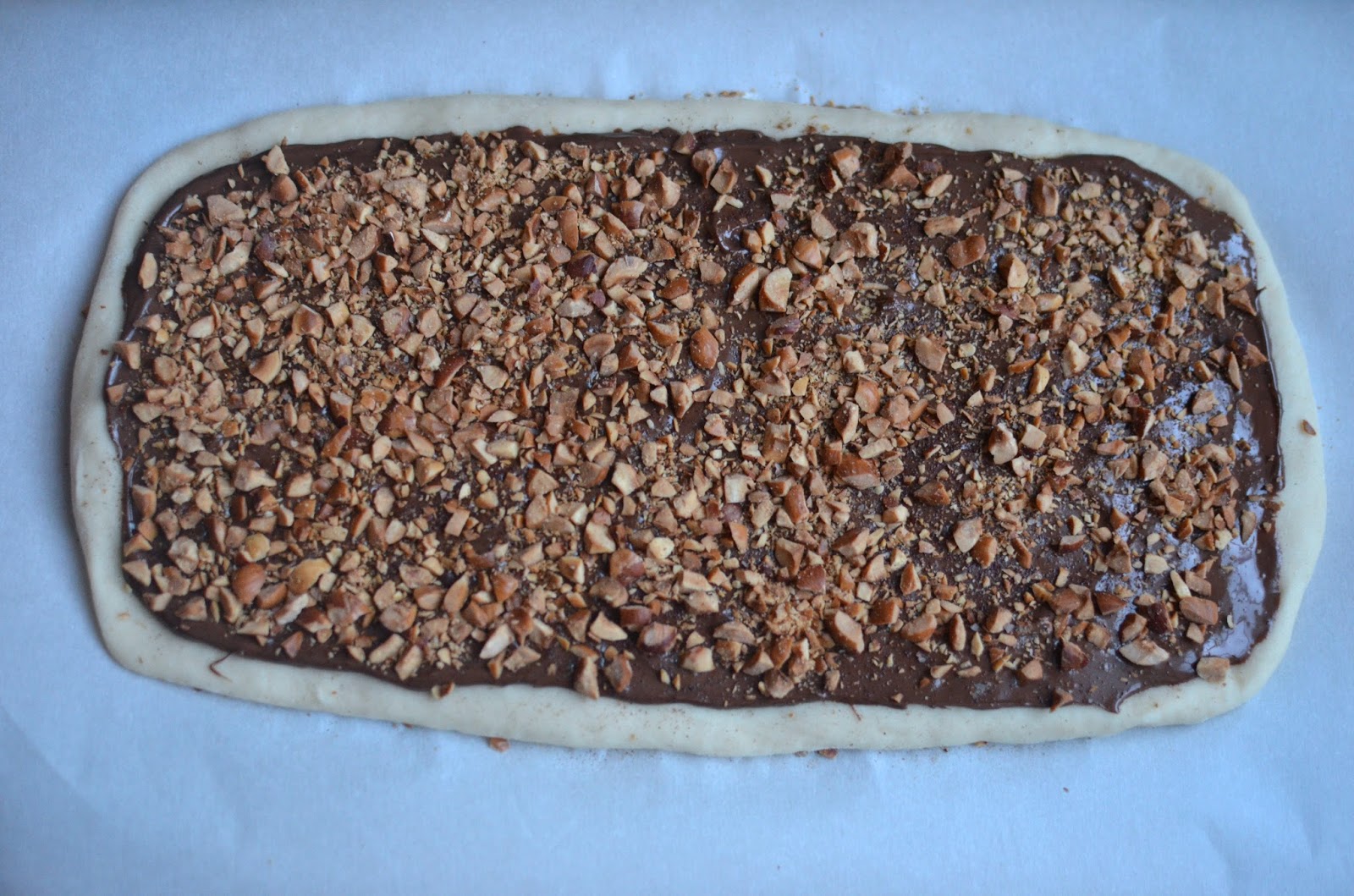 Next, dust some ground cinnamon on top.  It feels mandatory to add some cinnamon into your "cinnamon rolls".  I like the cinnamon in moderation so I use about 1/4 teaspoon, maybe a little less.  You can stop there but I really wanted to add some texture and increase the nutty flavor by incorporating some toasted, chopped hazelnuts. 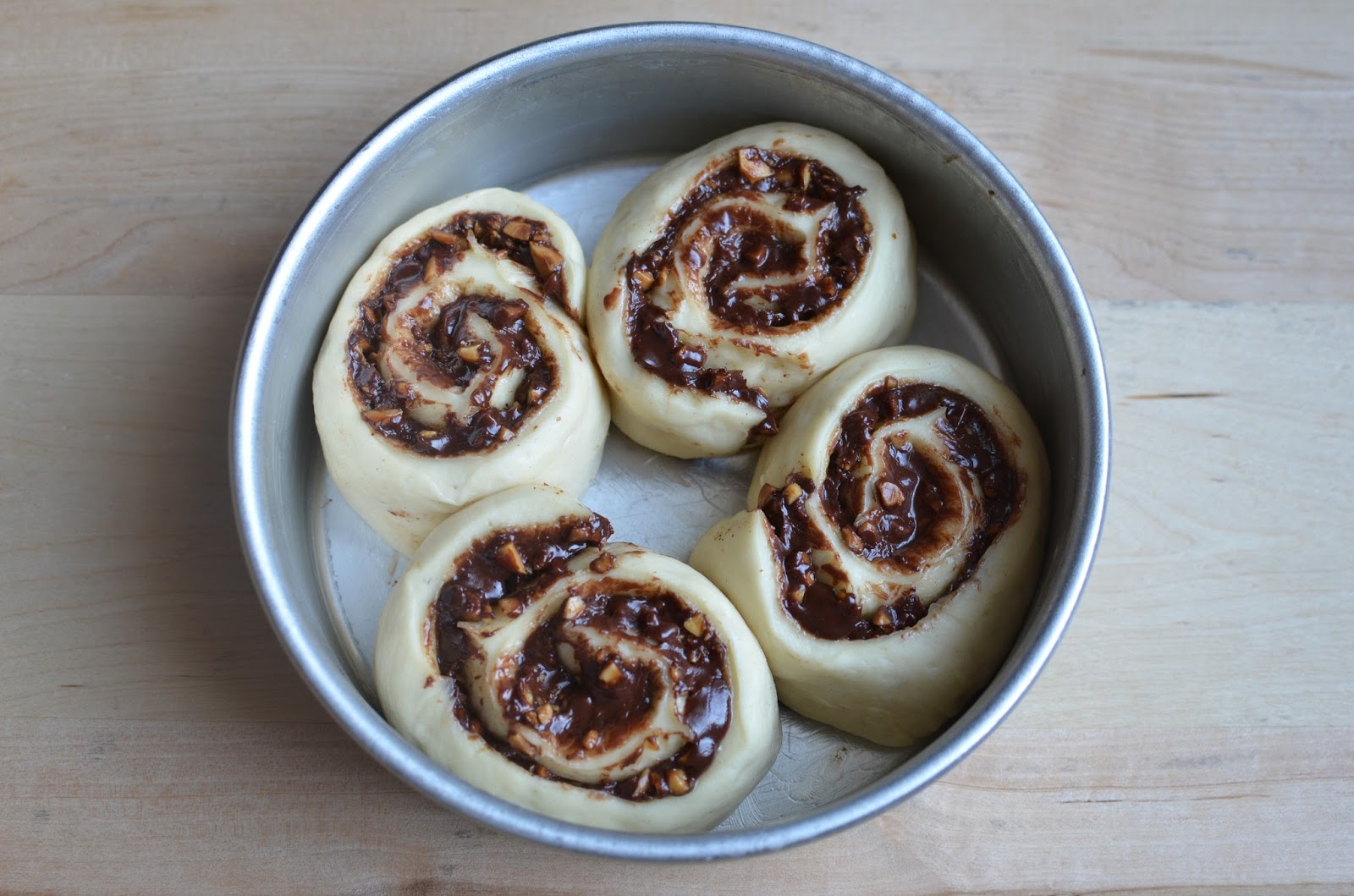 This is how the rolls look (above) before their second rise.  I make the rolls the night before and store it in the fridge.  I'm the early riser in the family so I take them out of the refrigerator in the morning and let it rise again in a warm spot for about an hour or so.  Then, it only takes about 12 minutes to bake.  They don't brown very much after baking (below) but will have expanded and puffed up nicely. 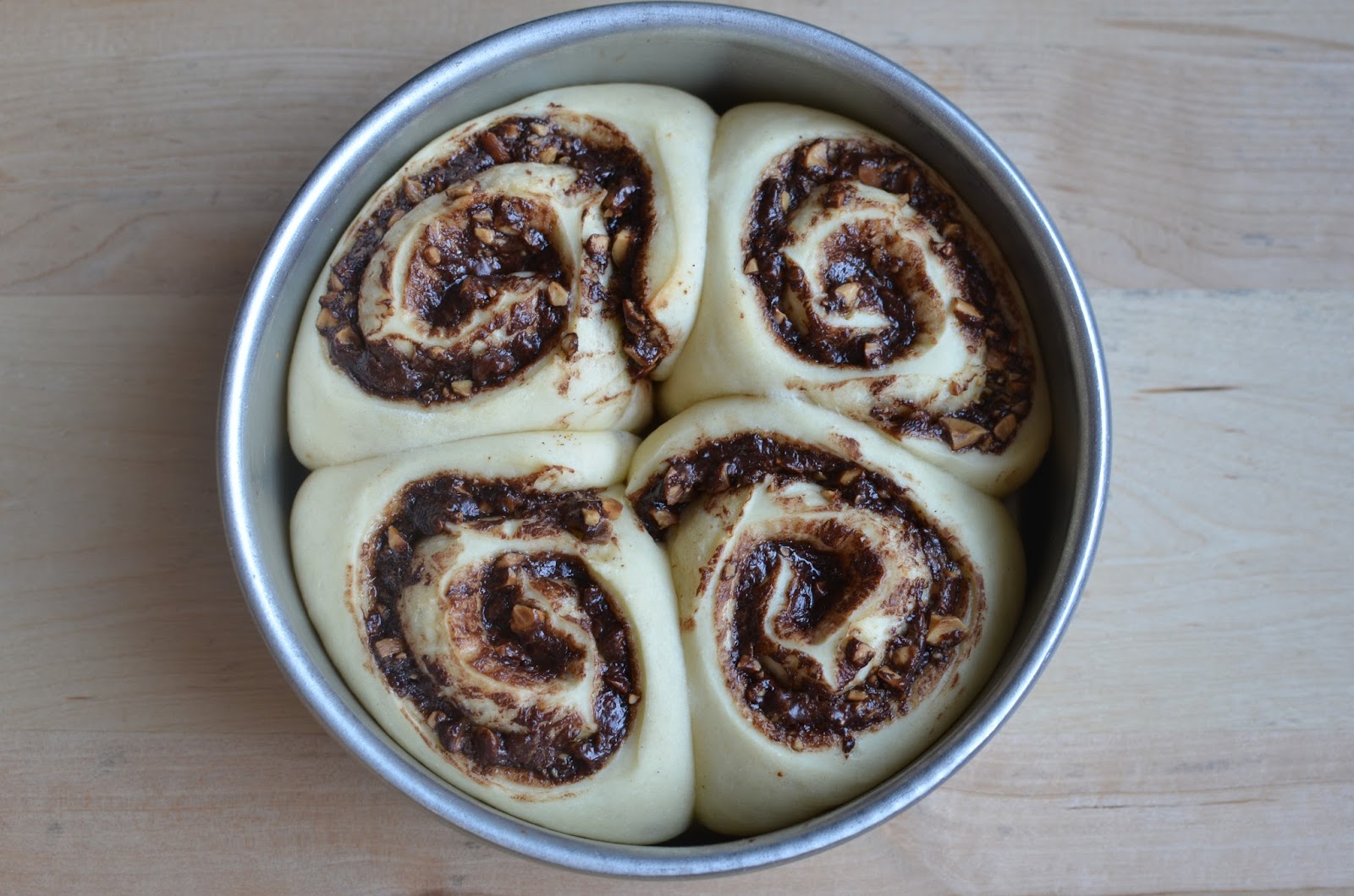 I didn't feel the need for a glaze.  You've got plenty of flavor in the delightfully soft dough with Nutella and hazelnuts in every bite.  You must enjoy them warm and I love a cup of coffee on the side.  It's just crazy good!  There's really nothing else to say...

In a small bowl or measuring cup, lightly stir yeast into the warm water.  Add a pinch of sugar, cover, and set aside until foamy, about 10-15 minutes.  If the mixture does not foam after that time, you will need to start over.

Turn the dough onto a lightly floured surface and roll or pat/press the dough into a 5x10 inch rectangle (I rolled the soft, pliable dough out between parchment paper and plastic wrap).  Spread the Nutella evenly over the dough, leaving about 1/4 to 1/2-inch border along the sides. (If necessary, place Nutella in a dish and heat for 10 seconds in the microwave to loosen it up for easy spreading.)  Sprinkle cinnamon on top of the Nutella, followed by the hazelnuts.

Starting at the short end, tightly roll the dough, trim off the ends, and slice into 4 even pieces.  Place rolls into the prepared cake pan and place in a warm spot to rise again until doubled in size, about 30-60 minutes (60 minutes being optimal).  [Do ahead: Once the rolls have been sliced and placed in the pan, cover and refrigerate overnight.  In the morning, remove the pan from the refrigerator, set it in a warm place to rise again - this may take a bit more than an hour - and bake.]  Bake in a 375 degree oven for 12-14 minutes.  The rolls will still look fairly pale after baking.

Let rolls cool slightly for about 5-10 minutes in the pan, then serve and enjoy while they are still warm.