This is the dessert I served during last weekend's pasta night, a matcha-almond roll cake with a sweet red bean cream filling.  My sister loves green tea desserts and my husband has been a big fan of this cake so I thought I'd whip up another version of it again. 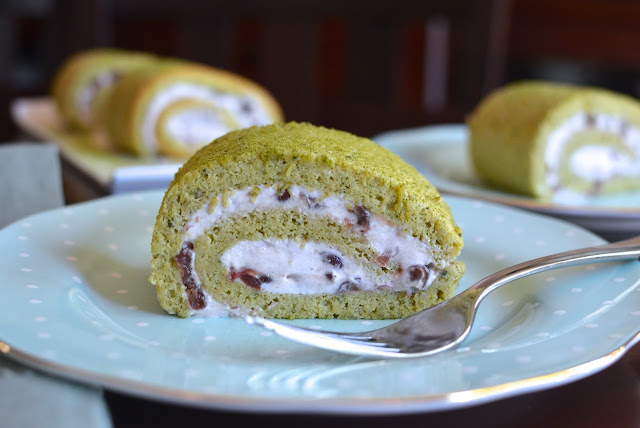 So I'm once again circling back to the matcha-almond sponge (it's that good).  I made the layer cake twice and each time, I was thinking it would be interesting to try and turn it into a roll cake.  The soft, spongy, and super-moist texture of the cake makes me think of roulades and I just had to give it a try.

Instead of a chocolate cream filling, I went with the Asian theme and made a sweet red bean filling.  The combination of green tea with sweetened red beans (azuki) is very common and popular in Asian desserts (from ice cream to red bean paste fillings for buns and cakes, which I adore).  You can simply buy prepared sweetened red beans like I did and fold it into some freshly whipped cream. 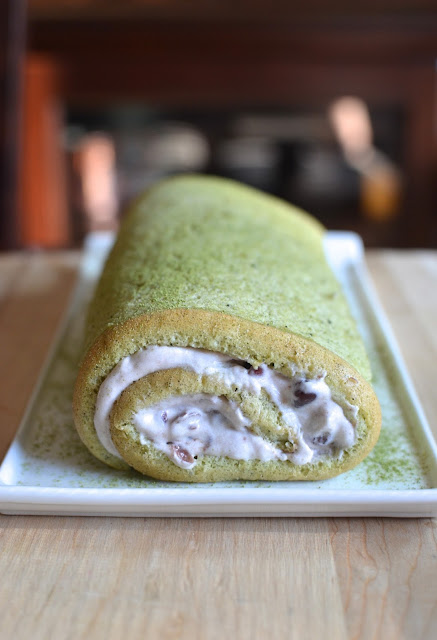 Need I mention that I'd never made a roll cake before?  It's probably pretty obvious. And should I also say that this might not have been the best first-time experiment since this particular cake is likely more fragile (almond meal adds a great taste and texture but it makes the cake all the more moist) than your typical roll cake recipe?

Excuses aside, I think I had acceptable success with turning this cake into a rolled one.  Ironically, despite all my worries about how thin and fragile the cake is and how it might stick to the towel, my "downfall" was actually not positioning the cake onto the towel properly so that I had to double fold the towel at the top before the first fold, which resulted in the towel "cutting" into the cake and breaking it in one section. There was some sticking but that was manageable.  If only I had placed the cake in the right position at the top of the tea towel!  But hey, 'don't let perfection be the enemy of the good', right?  I seem to tell myself that a lot. 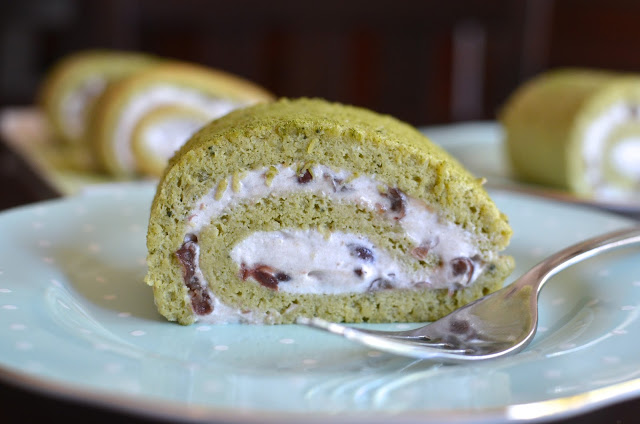 And when all's said and done (as well as filled and rolled), I think things worked out just fine.  The cake plates were wiped clean and we had a great time over dinner.  I think dessert just round out a meal and gives it the perfect little sweet finale.


For this roll cake of mine, I took the Sprinkle Bakes recipe and I once again baked it in a 9x13 inch pan.  This cake has only 2 tablespoons of flour in it and I wanted to add a bit more to try to firm it up a bit for rolling.  In the end, I was too scared to add more than an extra teaspoon of flour to the batter because I was concerned that too much would ruin the lovely moist texture.  I could probably have gone with a bit more.

This recipe will make a a small roll cake, yielding 4 to 6 modest servings. 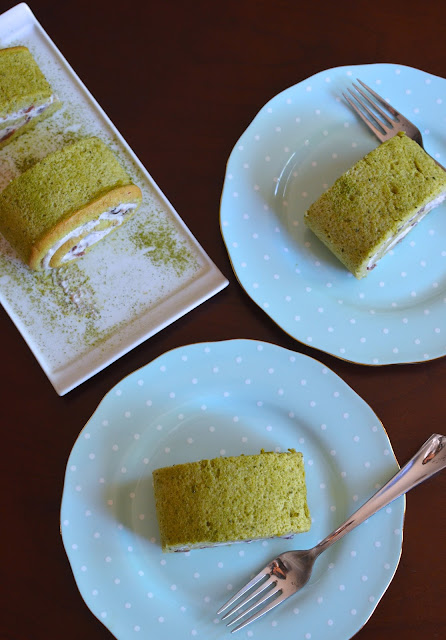 For the filling, I started by whipping up some heavy cream, which I just very slightly sweetened since the red bean mixture is already sweet.  I whipped 3/4 cup of whipped cream but wound up with quite a bit of filling leftover so I've reduced the amounts in the recipe below and I'd go with 1/2 cup of whipped cream next time.

For the red bean part of the filling, look for canned prepared sweetened red beans, as shown below.  You can find it in Asian grocery stores. 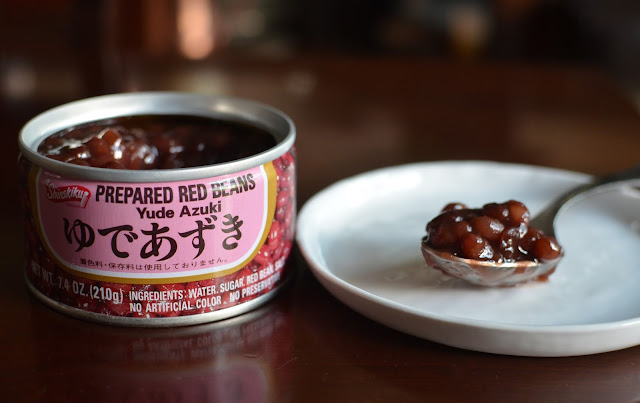 The red beans are cooked with sugar, soft and sitting in a thick paste.  I was worried about too much liquid in the filling so I placed the red beans in a sieve and mashed about half of it.  I removed some of the excess liquid that pushed out through the sieve but not too much because I find you do want some of that thick liquid to sweeten, flavor, and tint the whipped cream.  Mashing the red beans also lets the red bean flavor incorporate better into the cream while seeing bits of whole red beans in the filling lets you know what you're getting. 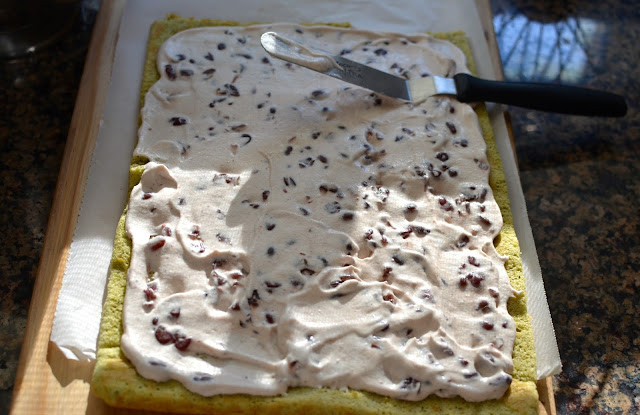 The picture above is not the prettiest but it shows what was happening in my kitchen. When the cake came out of the oven, I turned it out onto a clean tea towel to roll. My mistake was placing the cake near the center of the towel instead of at the top; that wouldn't be a problem if I could easily move the cake but since it's not easy to lift up and move (maybe dusting the towel with matcha powder would've helped but I didn't want to waste that much matcha), I double-folded the towel at the top before I starting rolling the cake up, and that thicker part of the towel cut into the cake and ripped it in one section.

When the cake cooled to room temperature (doesn't take long), I unrolled it (slowly because the bottom does stick to the towel but will remove pretty easily nonetheless) and placed it on top of a piece of parchment paper before spreading on the red bean cream filling.  Finally, I carefully rolled it back up and dusted the top with a bit of matcha powder. 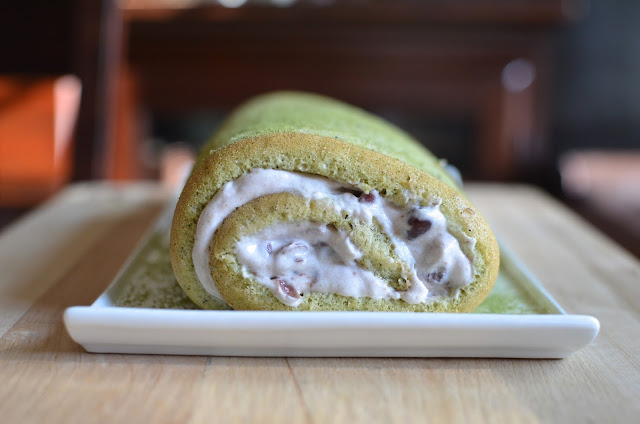 The roll cake can sit in the fridge until dinnertime.  Remove it from the fridge during dinner to bring it to room temperature before slicing and serving. 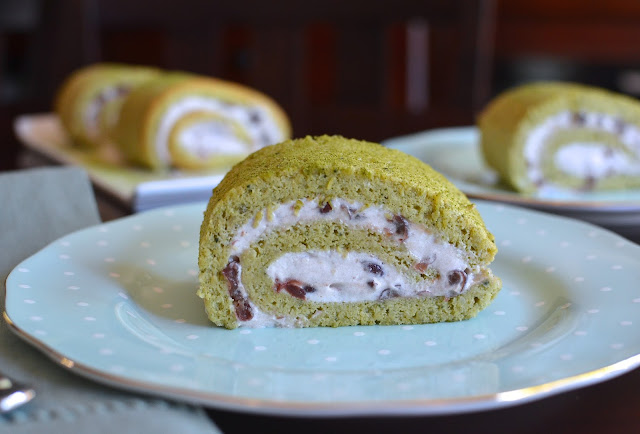 This cake is fragile but oh so light, soft, and moist.  The green tea flavor is very subtle but I think it does temper the overall sweetness.  You definitely get almonds from the almond meal in the cake itself and the sweetness from the red beans makes for a nice package.  We really enjoyed this little roll cake.  I think I'm now ready to tackle roll cake recipes now should I feel the urge (and if anyone else feels the urge to post a roll cake recipe for the holidays, I'd like to request a video)!

In a stand mixer fitted with the whisk attachment, begin whipping egg whites until frothy.  Add cream of tartar and continue to whip until stiff peaks begin to form. Gradually add sugar and whip to incorporate to stiff peaks.

Wipe the whisk attachment clean and using another bowl (or use the same bowl after removing the whipped egg whites and wiping the bowl clean), whip the 2 whole eggs with the confectioners' sugar, almond meal, and salt.  Whip until mixture thickens a bit and looks pale-yellow, scraping the bowl as necessary.  Add 1 1/2 teaspoons matcha powder and mix on slow speed to combine.

Pour batter into prepared pan.  Use an offset spatula to evenly distribute and even out the batter across the pan (be gentle so as not to deflate the batter).  Bake for about 5-6 minutes; cake will be set and a cake tester comes out clean.  Keep a close eye on it and do not overbake.

Remove cake from the oven.  Run a butter knife around the edges of the cake and carefully invert it on top of a clean, thin kitchen towel.  Position the cake so that the short end will settle near the top edge of the towel.  Gently remove the parchment paper attached to the cake.  Carefully roll the short end of the cake together with the kitchen towel.  Let sit, seam side down, until fully cooled to room temperature.

Make red bean cream filling: Place prepared red beans into a fine sieve.  Mash about half the beans with the back of a spoon.  Remove some of the liquid that has been pushed through the sieve.  Place the beans into a small bowl and stir together.

Place heavy cream in a bowl of a stand mixer fitted with the whisk attachment (or use a handheld beater).  Start beating the cream.  Gradually add sugar, then vanilla extract.  Continue to beat until cream reaches stiff peaks.  Fold the red beans into the whipped cream.

Assemble roll cake:  Set a piece of parchment on a work surface.  Unroll the cake on top of the parchment (go slowly since the bottom of the cake will stick to the towel but does release).  Spread the filling over the top of the cake, leaving about a 1/4 inch border. Starting at the short end, roll cake into a log, using the parchment to help you along.  Set cake on a serving plate, seam side down.  Place in the refrigerator for about 30 minutes or until ready to serve.  Before serving, bring cake to room temperature.  Dust the top with a bit of matcha powder, if desired.  Slice and enjoy.