This is not a green tea crepe cake.  It kind of looks like it, though, doesn't it, with all those thin layers of cake?
It is, in reality, what happened when I tried to make a matcha/green tea almond sponge layer cake but the cake turned out so thin I ended up doubling the stacks and making a 15-layer concoction instead!  It still only measured maybe a little over 3-inches tall with all those layers, by the way.

If you'd like a good laugh, I was aiming for this.  Sprinkle Bakes had a post on matcha cakes recently and at the end of it, she listed a few other matcha dessert recipes. The one for matcha-almond sponge layers really appealed to me and I thought I could tackle it (ha!).  But let me step back for a minute...do you visit Sprinkle Bakes? Heather is (literally) an artist, and a very nice person to boot.  When I first started this blog 4 years ago, she was one of the original baking blogs I started reading and I was so impressed by her work that I emailed her to tell her so (I'd never done anything like that before).  She replied with a very sweet and encouraging email, and I have continued to admire her creations.  To be honest, her desserts are totally out of my league and I essentially just gawk at her work.  It looks like I need to revert back to gawking... 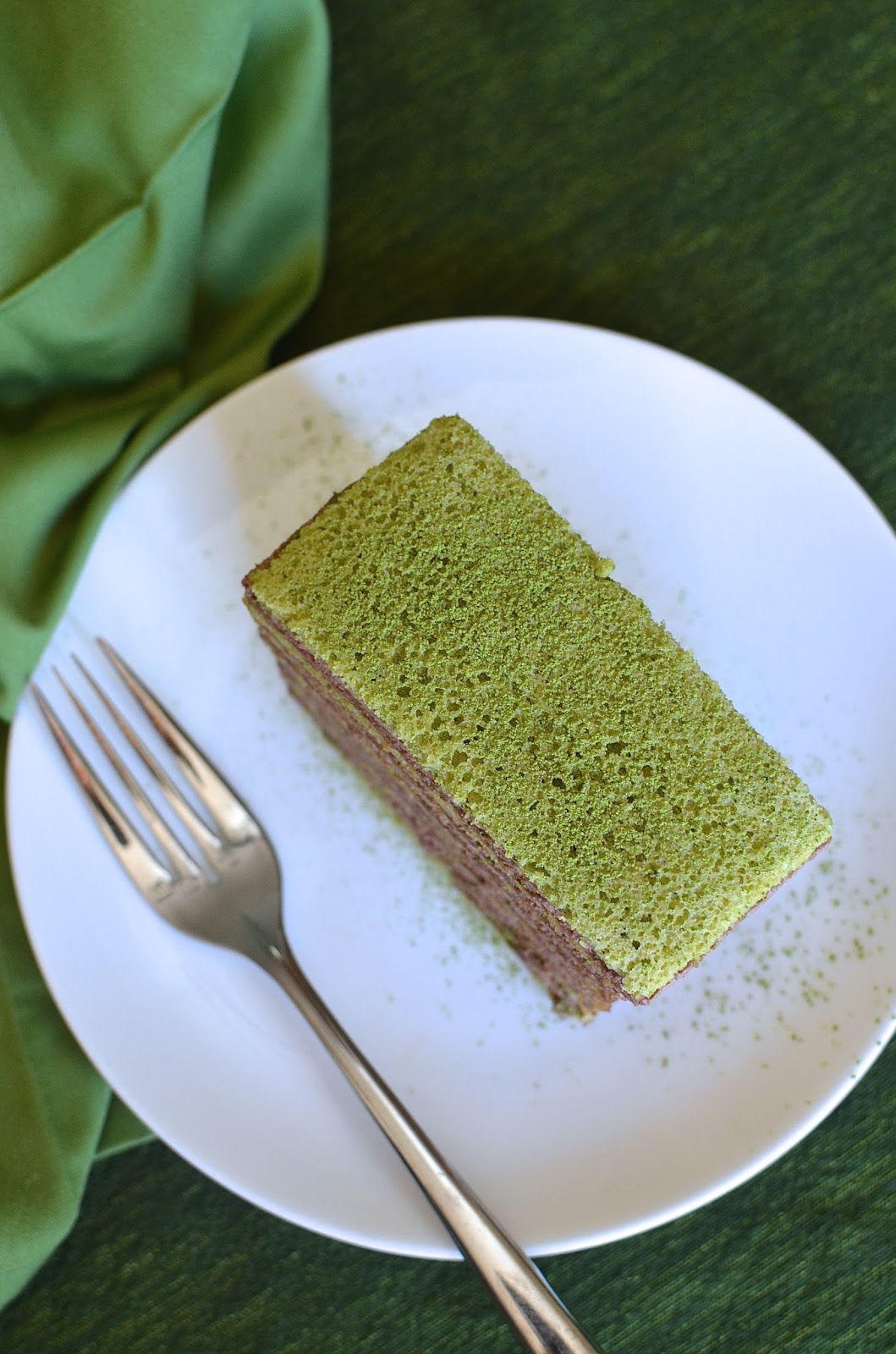 There was a moment when I was making this cake...when I realized how thin my cake was and when bits of it were sticking to the parchment paper...that I considered just scrapping the whole thing.  I only considered it for a second though because my general motto in the kitchen is to keep going and make the most of it when things go wrong.  I hate to waste - both effort and ingredients - so I try to avoid it and frankly, I find that most missteps still turn out rather tasty, as it did in this case.

So I kept at it and decided to double-stack my layers.  I only ended up with the 3 slices of cake you see here.  Had I trimmed my cake a little better, I might have been able to squeeze 4 slices out of it.  Maybe... 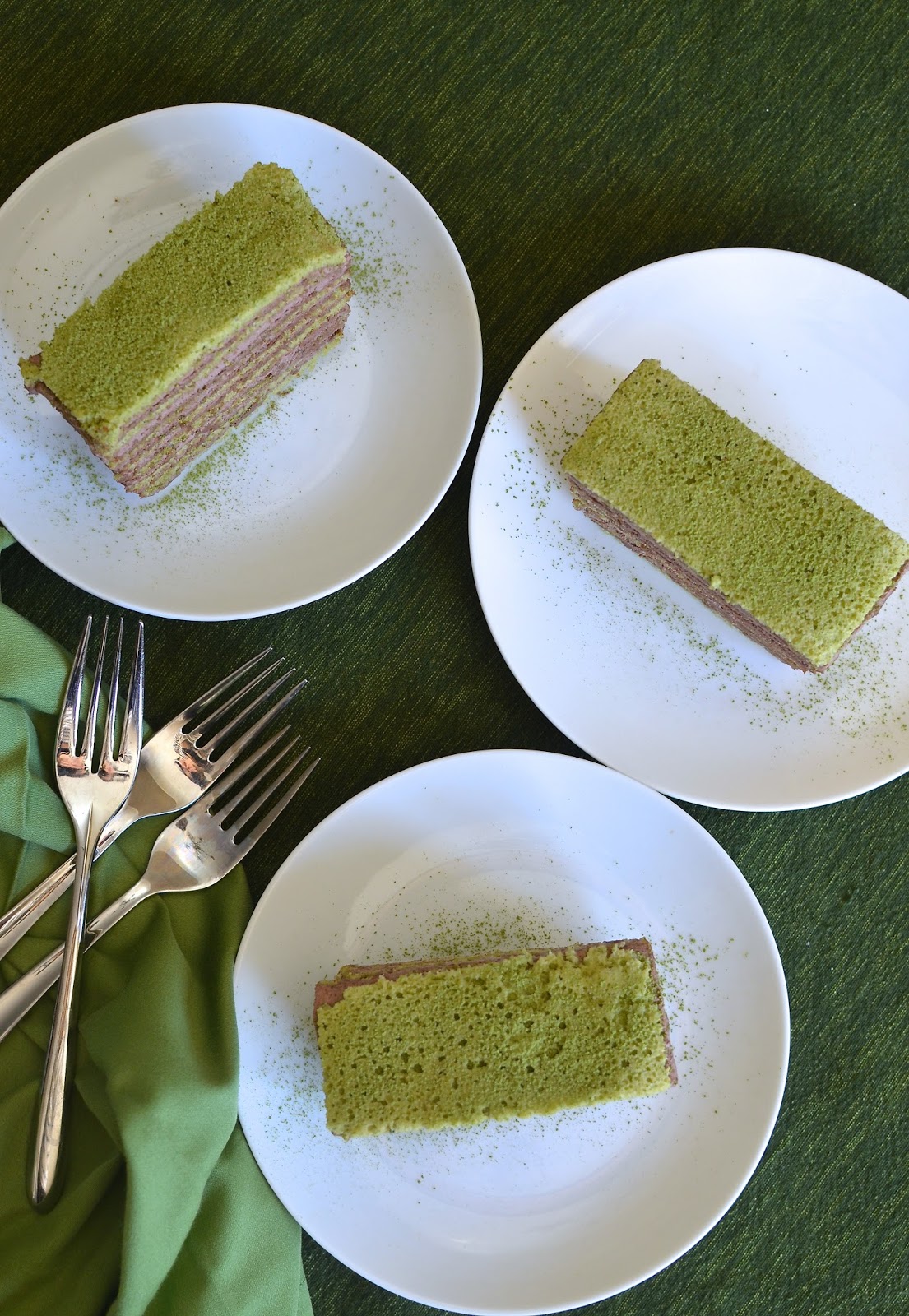 And you know that general advice about never trying out a new recipe if you're having someone over?  Well, it's a very good thing I had only invited my sister (and brother in law) over!  I think of her when I think of green tea desserts.  When things were looking rough, I warned her before her arrival that my project had turned out a lot more challenging than I imagined.  But luckily, I can say that these slices of cake disappeared from the table very quickly.  Everyone enjoyed it!  The matcha-almond cake itself is super moist; the matcha powder gives the cake a great hue but the flavor of green tea is mild.  The cocoa whipped cream I slathered between the layers adds creaminess and of course, a chocolate flavor, which I love.

All in all, this was an interesting experience!  I'm glad I still got to serve something and it was actually quite tasty.  I honestly don't think my sister would have been the wiser had I served this and told her it was supposed to be this way, a torte of sorts. My husband wished we had more of it and I did too but I'm just glad it worked out in its own way and nothing was wasted.  I can only laugh and say that I'm glad I just do this for fun!


When something doesn't go according to plan, we all think about what happened or what went wrong.  I'd like to partly blame this photo below. 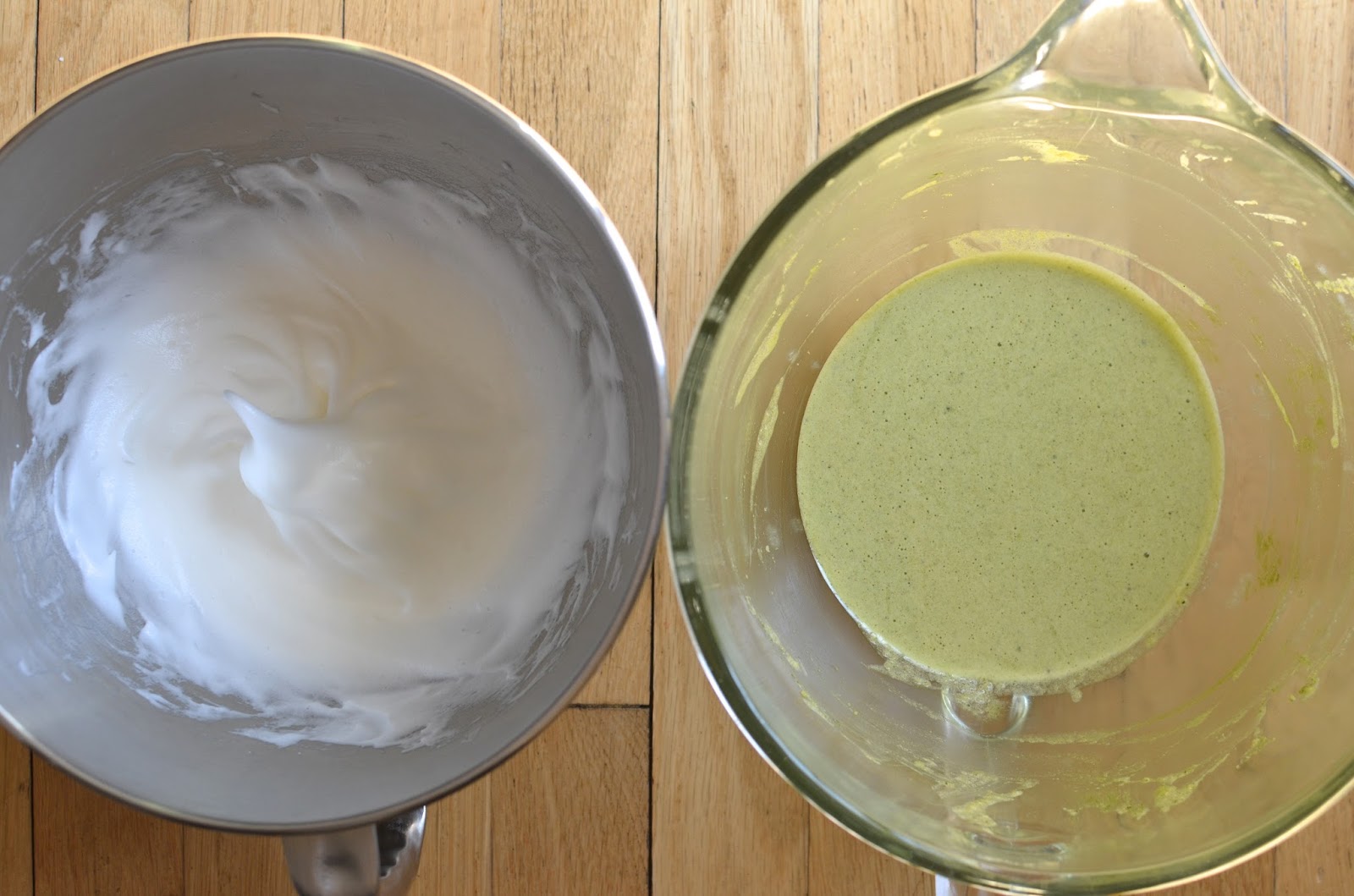 I took this picture and proceeded to combine the egg whites with the rest of the batter.  It wasn't until the batter was on the baking sheet that I remembered I'd left some of the egg whites on the whisk attachment.  Precious egg whites that I needed every last drop of in this case!  I'm not saying those extra couple of tablespoons would have made a significant difference but I wish I hadn't lost any batter. 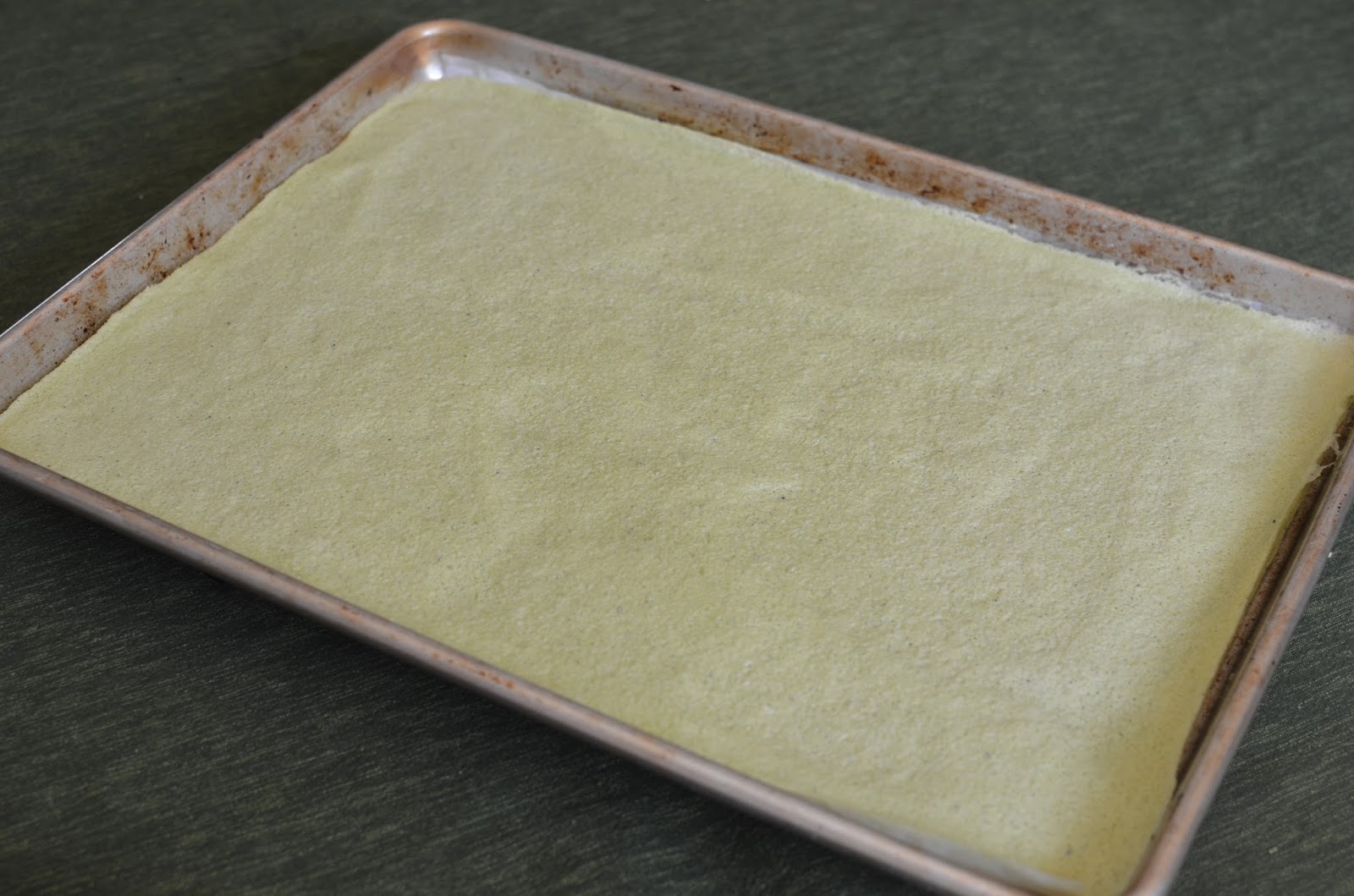 The recipe notes that the batter, which is spread into a sheet pan, will be THIN.  And mine certainly was.  You can see the baked sponge cake above.  Everything looked alright for the time being... 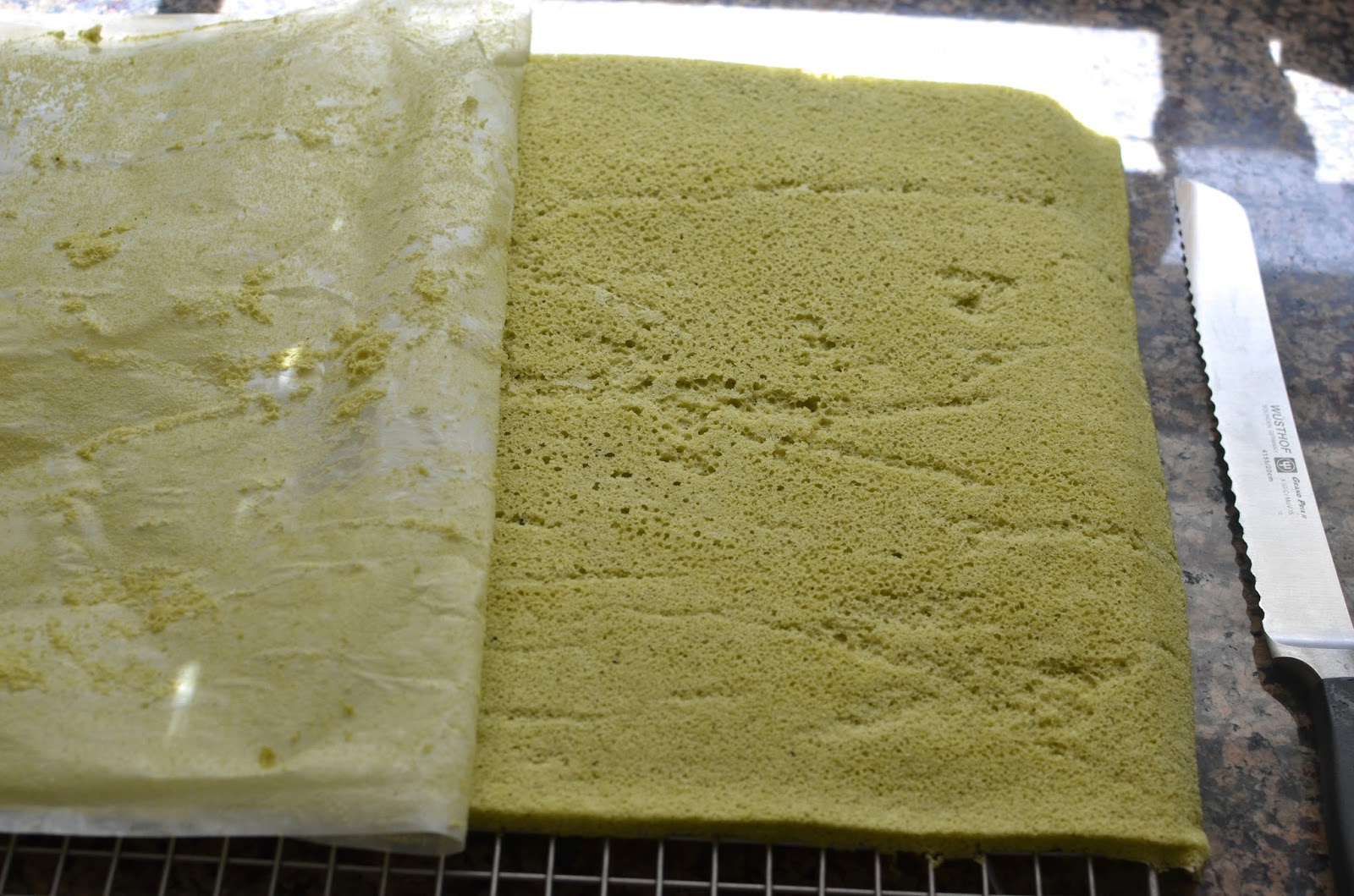 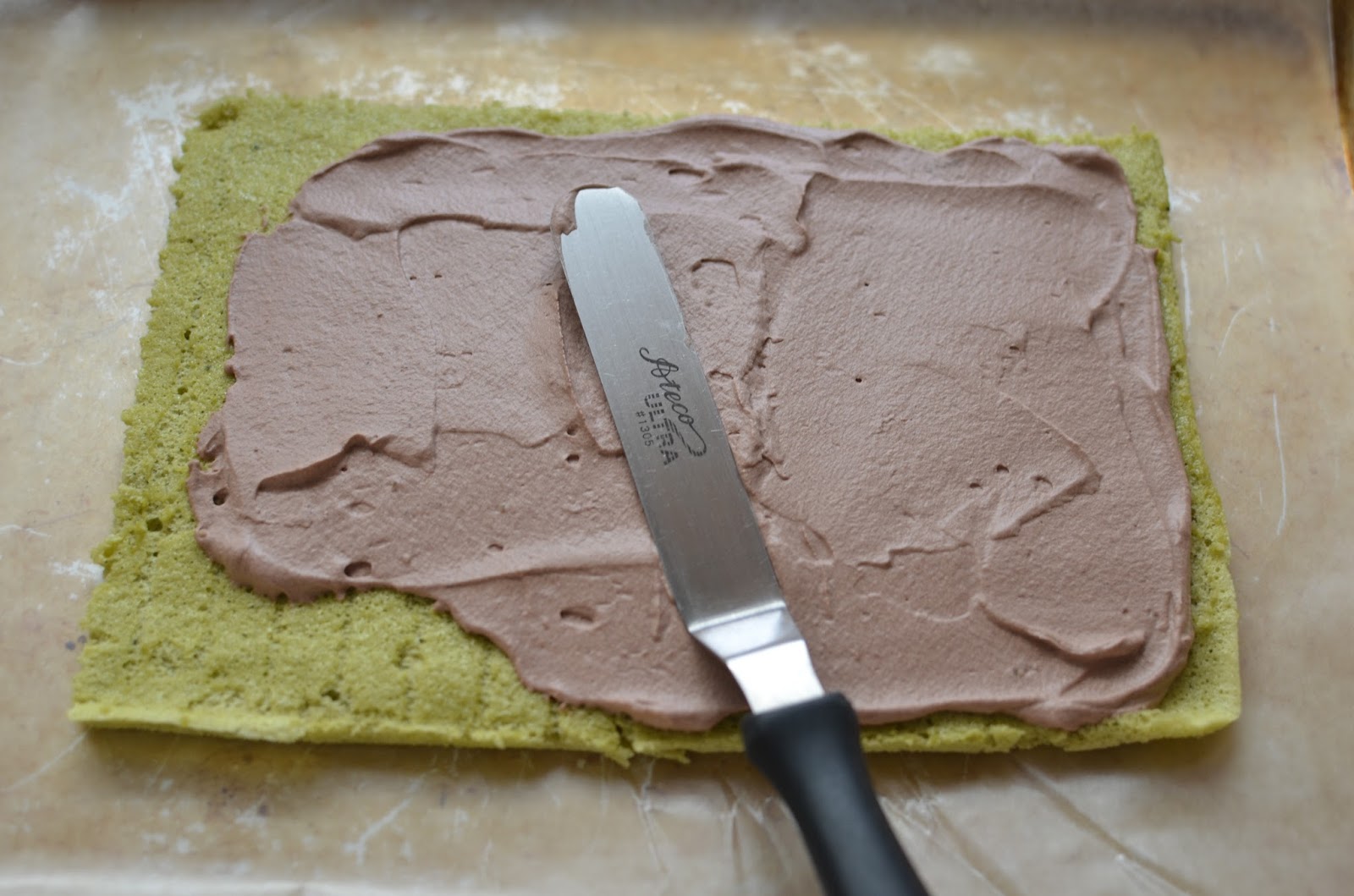 The situation got sticky (literally!) when I realized the sponge cake was sticking to the cooling rack I had set it on.  The ground almonds in the sponge batter makes the cake delicious and moist but I think it contributed to this particular stickiness.  In retrospect, I would have laid a piece of parchment paper on top of the cooling rack first.  So there followed another painstakingly slow process of removing the cake from the cooling rack and turning it around again.  After that, I cut the rectangular sponge cake into 4 equal pieces.  The filling (I decided to make it a cocoa whipped cream filling) should be spread between the layers. 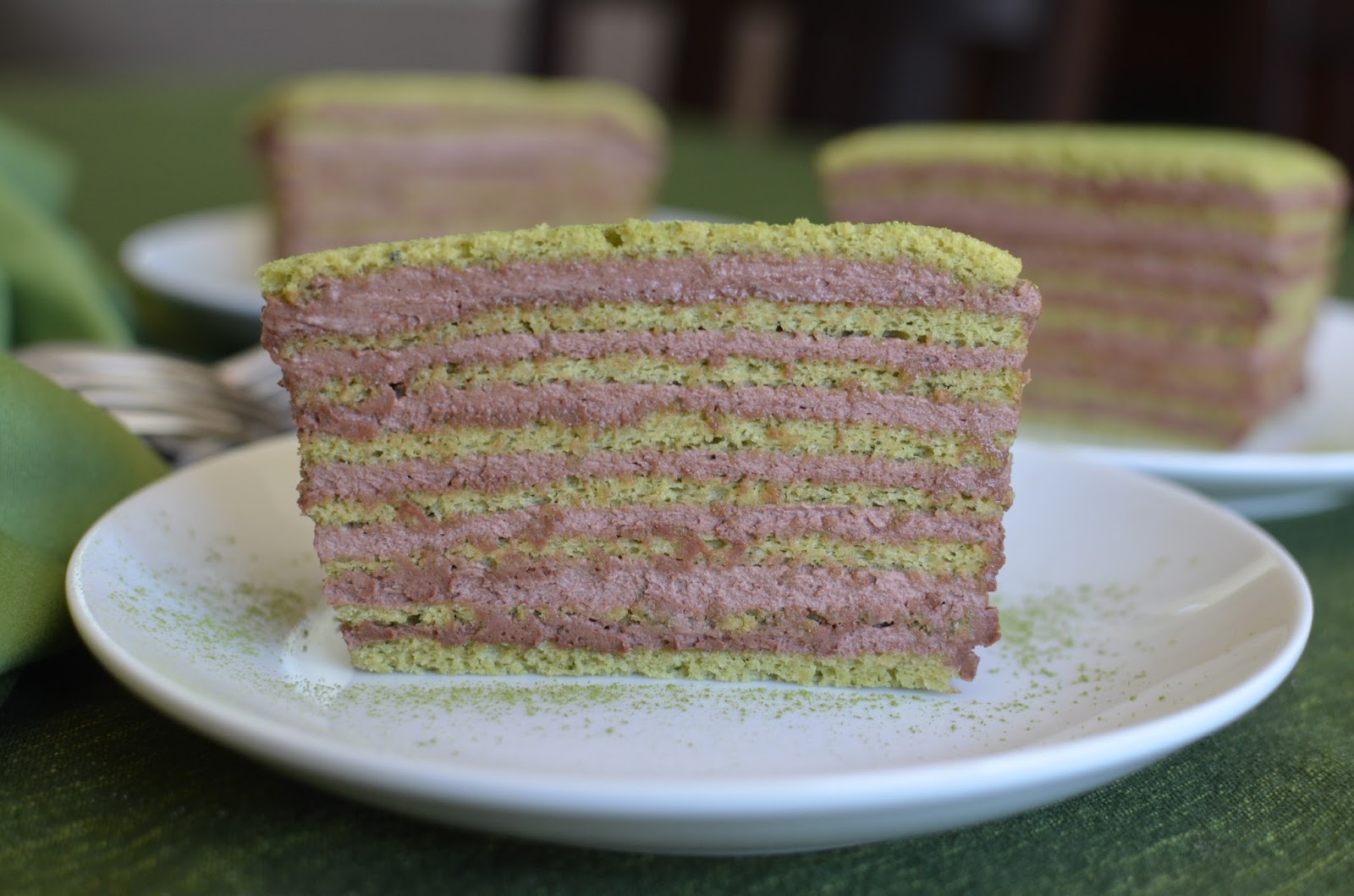 And finally, I come to the realization that my cake slices would just have been too short if I done it as intended - 4 layers of sponge with 3 layers of cream filling in between.  So I opted to slice my cake in half again, spread another layer of cocoa cream before stacking the other half on top of it.  That made a total of 15 layers...albeit very thin ones! 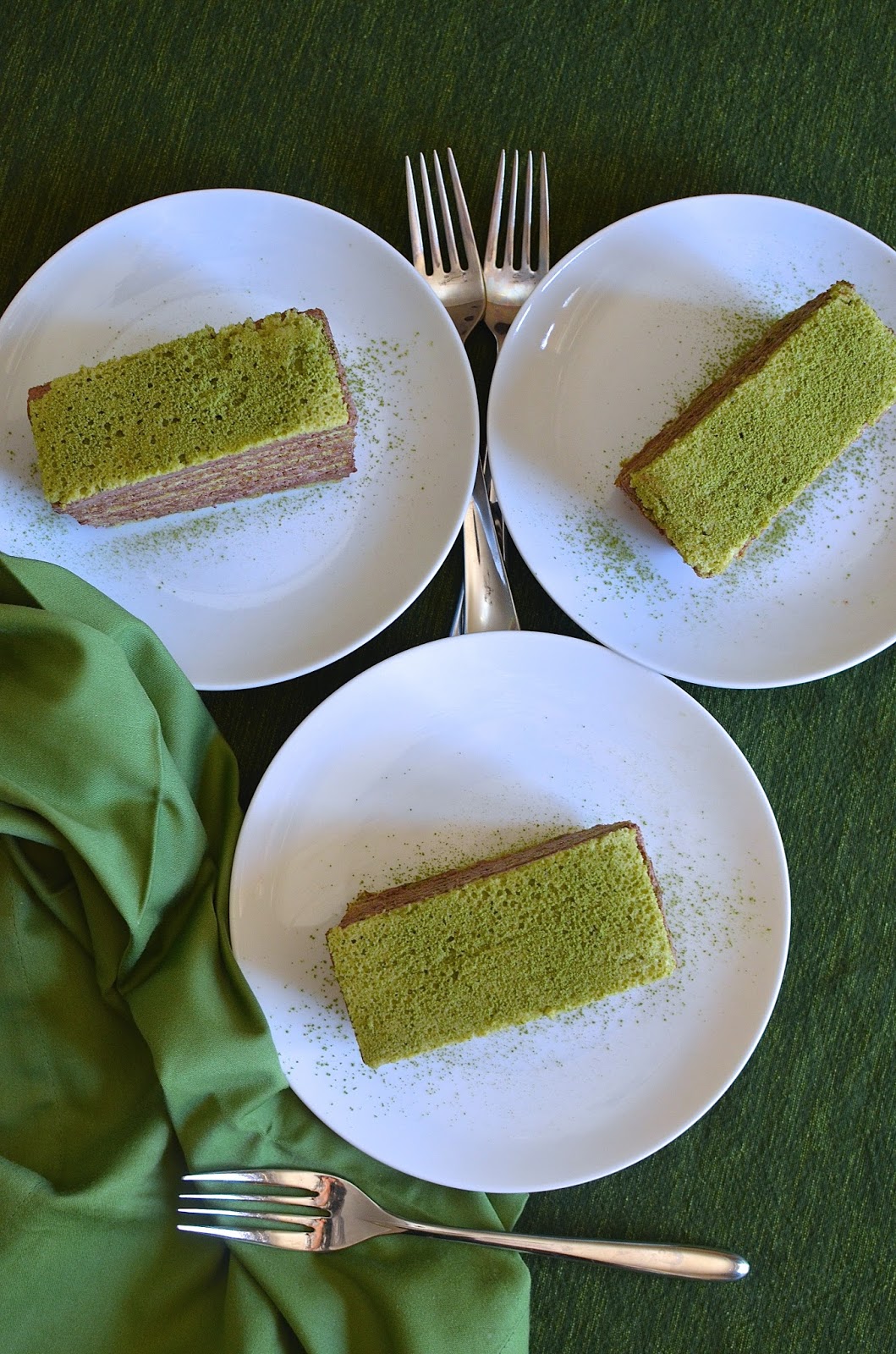 I sliced what I had into 3 portions and just dusted the tops with a little matcha powder.  The cake was honestly very tasty.  Our forks glided right through the super soft layers and every bite was creamy and moist.  It was a rough process getting to the tasting point but we got there.

Looking back, maybe I should have baked my sponge cake in a 9x13, instead of a 12x16 baking sheet.  Regardless, I'm just happy we still had something to eat with our coffee that afternoon.  All's well that ends well!

Given my eventful experience making this cake, I'll revert you directly to the original recipe from Sprinkle Bakes: here

Notes:
- The key takeaway is my sponge cake turned out extremely thin.  I ended up doubling the stacks, resulting in 15 thin layers.  I would consider baking the sponge in a smaller, 9x13 inch, baking pan instead of a sheet pan.

- I had trouble with the moist sponge cake sticking to the cooling rack.  To help with this, I would first set a large piece of parchment paper over the cooling rack before turning the cake out on top of it.  Then, remove the parchment attached to the cake, and then flip the cake over again right-side-up.

- I omitted the white chocolate matcha topping; I had always intended to.  I simply dusted the top with a touch of matcha powder.

For the filling I used:

Place cocoa powder, sugar, and vanilla extract into a large measuring cup.  Add enough cream to make a thick paste.  Add the rest of the heavy cream and stir/whisk together to combine.  Set mixture in the refrigerator for an hour or overnight (this creates a thicker, richer flavor).  Whip in a stand mixer fitted with a whisk attachment (or use a handheld mixer) until it just reaches stiff peaks.