The weather here (in New Jersey) has taken a decided turn.  We've pulled the comforter out and I've got my fuzzy slippers on standby.  I've been nesting a little bit, finding a lot of comfort in cooking and baking up old-favorites, recipes I've discovered thanks to this little blog. 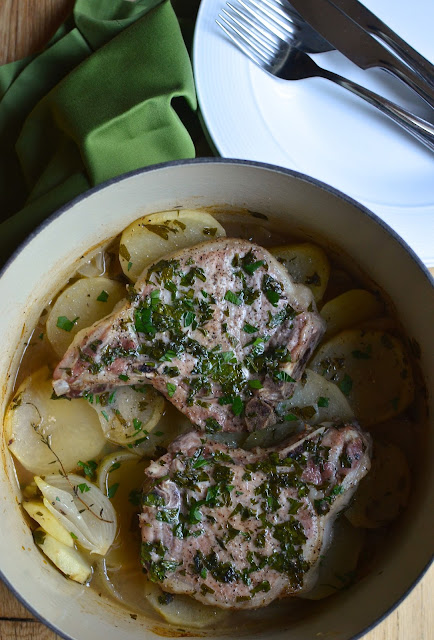 This past Sunday, happy that the rain and stormy weather had stopped (luckily, it hadn't been too bad for us to begin with), I thought I'd try something new.  I pulled out a recipe I'd saved from a magazine for a very easy one pot meal for dinner.  Who can resist a one-pot meal?

And I'd saved it for now because it calls for apple cider.  Since apple and apple-picking season is in full swing here, it's good timing because it isn't hard to get your hands on some apple cider right now.  My husband loves cider so I had him in mind, while my little one loves pork chops/meat.  However, I failed to remember how much the little guy does not like apple cider so he wasn't a fan of the potatoes, which had absorbed much of that sweetness from the cider.  All in all, it was still a nice change worth trying.  Just make sure you and your family like apple cider! 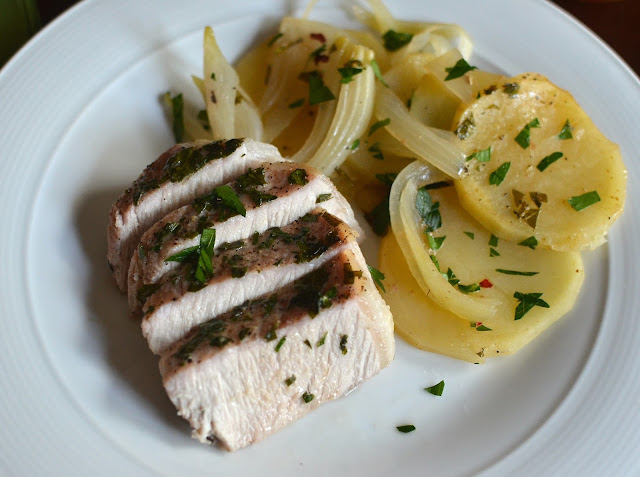 This meal takes little effort - not much beyond gathering the groceries for it. Everything - layers of thinly sliced potatoes and onions, 2 cups of apple cider, then the pork chops - literally gets placed in the pan with some herbs on top.  It bakes in a 400 degree oven for about 45 minutes.  Check on the pork chops and remove them by the time they reach an internal temperature of 145 degrees.  By that time, the vegetables should be tender.  Then, just slice, plate, and serve.

Admittedly, the dish does come out rather anemic-looking but I think it's a fair trade since you don't have to turn on the stovetop to brown anything.  It's not exactly a rich dish but it made a hearty, satisfying dinner with very little hands-on work.  I've been craving my husband's grilled pork chops that we enjoyed so much during the summer and while this may not be those smoky pork chops seared on the grill, it still hit the spot on a chilly Fall night.

Everything for this one-pot meal, besides the salt and pepper for seasoning, is shown below.  I didn't have rosemary and substituted with a few sprigs of thyme instead. There's still some left in my little herb box (which is just barely hanging on to life at this point).  The parsley actually came from my gardening-neighbor.  Somehow she manages to grow everything from tomatoes to garlic, zucchini, and herbs right across the street! 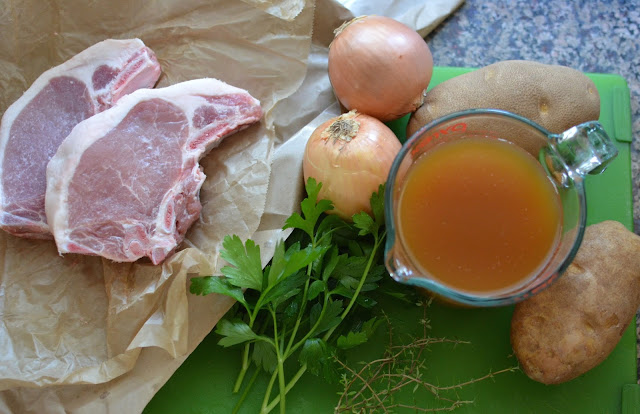 Back to the pot, slice a large onion (or two smaller ones) thinly.  Peel and slice about 1 1/2 pounds of potatoes thinly.  Place half the onions in a single layer in the pot, followed by half the potato slices on top of that.  Season with salt and pepper, then repeat, seasoning again.  Next, pour in 2 cups of apple cider.  That's a generous amount of cider and it goes a long way to helping cook down and soften the vegetables.  I found that I probably could have cut down the liquid by about 1/4 cup if I wanted to. 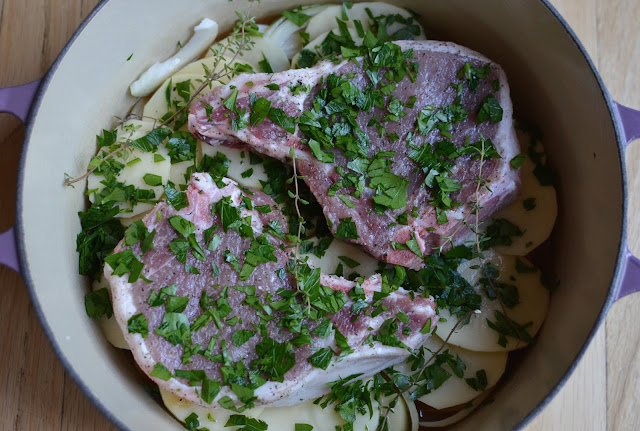 For the pork chops, I trim away the excess fat and then season them generously with salt and pepper.  Then place them on top of the veggies.  Sprinkle chopped parsley and the thyme sprigs on top.  Then it simply goes into the oven, uncovered, for about 45 minutes. 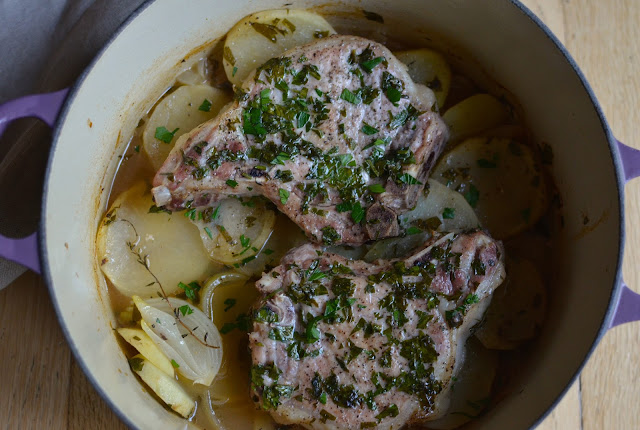 Hands-off cooking is luxury sometimes.  I checked on the dish starting about 10 minutes beforehand so as not to overcook the pork chops.  The latest guidelines for cooking pork chops is for an internal temperature of 145 degrees.  Let the pork chops rest for at least 5 minutes or so before slicing and serving.  By the time the pork chop is done, the potatoes should be tender since they're sliced so thinly. 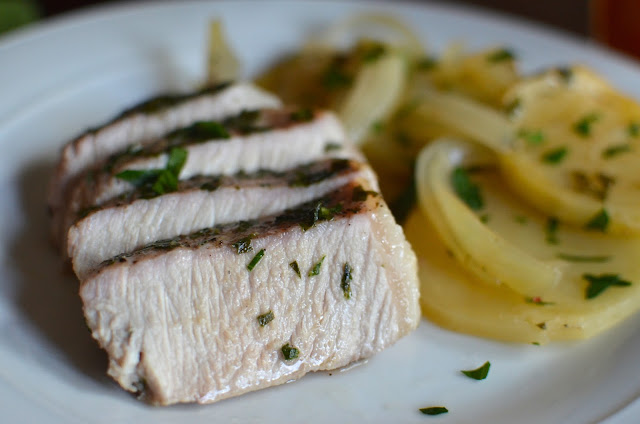 So this was our latest Sunday night dinner.  I'm looking forward to the next one, and to trying new recipes every so often!

Preheat oven to 400 degrees.  In a 5-quart Dutch oven, place half the onions in a single layer.  Top with half the potatoes.  Season with salt and pepper.  Repeat with another layer of onions, then potatoes; season.  Pour in apple cider.  Season pork chops generously with salt and pepper.  Place on top of the vegetables.  Top with parsley and thyme.

Place in the oven and bake, uncovered, until potatoes are tender, about 45 minutes. Pork chops should be cooked to an internal temperature of 145 degrees.  Let pork chops rest for 5-10 minutes before slicing and serving with the vegetables and an additional sprinkle of fresh parsley, if desired.