Time to talk cake - ice cream cake!  I love that my son's birthday falls in June - it's perfect ice cream season.
Ice cream cake was always my favorite kind of birthday cake growing up.  It makes sense since my birthday's in August but given how much I love ice cream, I'd have wanted ice cream cake for my birthday even if it happened to be in January!  My now 8-year old is an equal fanatic when it comes to ice cream and this is the third year in a row that I've made some kind of ice cream cake concoction to celebrate his big day.

Two years ago, I simply stacked 3 layers of ice cream together in a loaf pan and topped it with some melted chocolate and sprinkles.  Last year, I got a tad more adventurous and made a 3-layer coffee ice cream cake for the birthday boy.  The child is a big fan of coffee ice cream, cookies, and such!  That cake had a base layer of dark, dense chocolate cake, followed by coffee ice cream, and another layer of chocolate ganache.  It was scrumptious and I used that framework for this year's ice cream cake.

The difference is I went with a brownie base this time instead of the cake.  While the fudgy chocolate cake was possibly the best part of that ice cream cake for me last year, it was very difficult to cut.  I got to thinking of making a thin brownie layer instead; I mean, you just can't go wrong with brownies and ice cream, right?  Right! 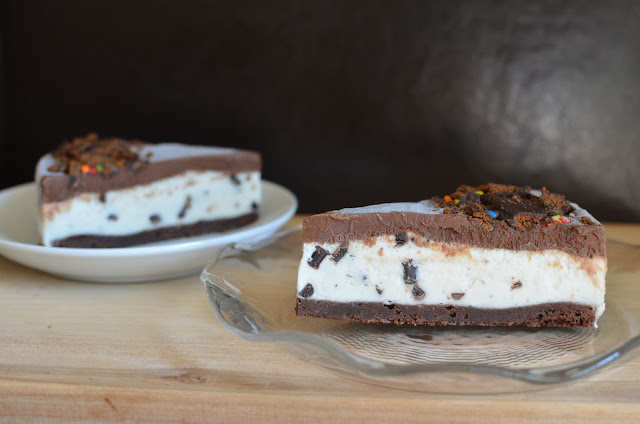 As you can probably tell just by looking it, the cake is simple to put together but I'll tell you all about it anyway because I could talk about food all day long...

I started with half a recipe of this brownie cake, which is just the Smitten Kitchen brownie recipe baked in the round.  (Incidentally, I think it just might be my favorite brownie recipe and that's saying a lot because I love them all!)  Half a recipe makes a nice thin layer at the bottom of this ice cream cake (after all, it's about the ice cream).  You just need to take care not to over-bake the brownie.  It takes only about 10 minutes in the oven to bake this thin portion in a 9-inch springform pan.  And the brownie bottom did turn out much easier to slice.

In an ideal world, I'd fill this cake with homemade ice cream but in reality, this is a crazy time of year and I'm grateful to use some good store-bought stuff.  If I went homemade, I'd have to make more than one batch to fill this cake since you need at least 3 pints of ice cream for the cake.  This year, we decided to go with mint chocolate-chip ice cream.  It's another one of the birthday boy's favorite (and mine, too).  We talked about maybe going with vanilla next year for a classic spin.
To finish this cake, I added a top layer of dark chocolate peppermint ganache.  I think a ganache topping is great not only because it is rich and delicious but because it stays so soft and easy to cut through and eat.  I thought about making a mint brownie base but decided not to so I thought a touch of peppermint flavor to the ganache would be nice.  Knowing I was going to make this cake for my son's birthday, I saved a few Girl Scout Thin Mint cookies to crush up and decorate this cake with.  Some colorful sprinkles always make a birthday cake better, too.

To start, I was aiming for a thin layer of brownie at the base of this cake and I think this was the ideal amount for me.  You could certainly play with the proportion and make a thicker if you like. 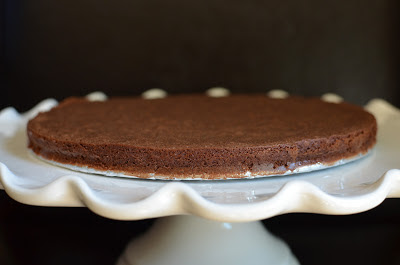 I line the bottom of a 9-inch springform pan with foil before baking.  When the brownie layer is cooled, turn it out, remove the foil, and put the brownie back (right side up) onto the pan and reattach the sides of the springform pan.  Removing the brownie like this will make it easier to cut and remove later.

I urge you not to over-bake the brownie.  As you can see, it was nice and moist baked for 10 minutes in my oven.
Then all you have to do is add ice cream of your choice.  Soften your ice cream in the refrigerator and press it into the pan on top of the brownie using an offset spatula or the back of a spoon.  The recipe calls for 3 pints, which is the portion of some of the standard store-bought ice creams.  From past experience, I decided to add a bit more.  You can never have to much ice cream and you know there's a lot of air in store-bought ice cream. 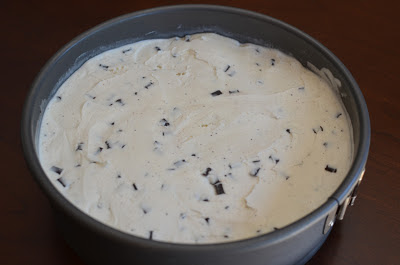 Finally, add a layer of chocolate ganache.  I decided to go with 6 oz. (or 3/4 cup) of heavy cream and dark chocolate; I don't think you need a ton of ganache on this cake.  I added about 1/8 teaspoon of peppermint extract to the ganache to punch up the mint flavor. 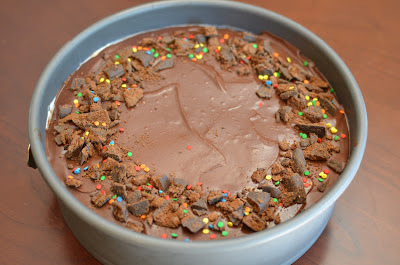 The extent of my cake decorating creativity doesn't go much further than some crushed Thin Mint cookies and sprinkles.  I was thinking about adding a whole layer of finely crushed cookies beneath the ganache but this was much easier.

I like that I can make this cake a few days in advance.  Set it in the freezer at least a few hours.  When you're ready to serve, gently run a knife around the pan and remove the sides of the springform. 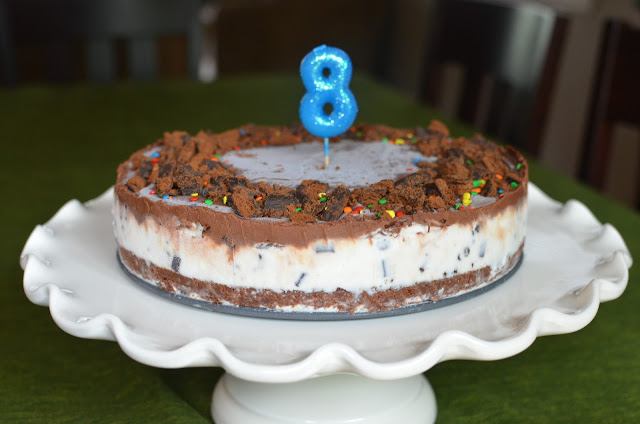 Making an ice cream cake is actually fun!  And it's a great treat for any summer occasion. 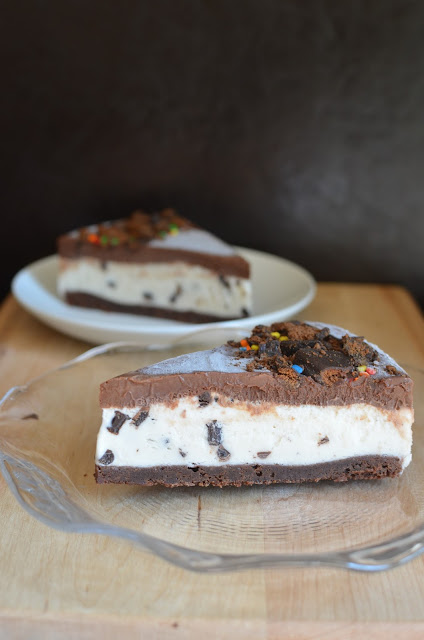 
Preheat oven to 350 degrees, with a rack positioned in the center of the oven.  Remove the sides of a 9-inch springform pan and wrap the bottom with foil.  Butter the foil as well as sides of the pan.

Make brownie layer:
In a heatproof bowl set over a pan of just simmering water, melt the chocolate, butter, and instant espresso powder if using.  Remove the bowl from the pan and whisk in the sugar.  Whisk in the egg, then the vanilla and salt.  Stir in the flour using a rubber spatula.

Scrape batter into the prepared pan, spreading batter evenly and smoothly around.  Bake until a toothpick inserted into the center comes out mostly clean, about 10 minutes.  Avoid over-baking so that the brownie layer will be fudgy and moist.  Let cool on a wire rack.

Make ganache:  When the cake is almost fully cooled, make the ganache by heating the heavy cream in a saucepan over low heat until the cream is hot (not boiling).  Pour the cream over the chocolate and let it sit for a minute.  Then whisk until the chocolate is melted and the ganache is smooth.  Whisk in the butter until incorporated.  Stir in peppermint extract, if using.  Let the ganache cool until slightly thickened but pourable.

Pour the ganache over the top of the ice cream.  Tilt the pan to spread it evenly or use an offset spatula.  Top cake with crushed cookies, sprinkles, or other decorations.

Wrap the cake, in its pan, with plastic wrap and then aluminum foil (make sure to wrap the bottom as ice cream is very likely seeping out).  Freeze overnight or up to one week.