Birthday bonbons and other treats for my 8-year old!

My little guy turns "8" today!  Needless to say, I want to give my son a great big shout-out on his special day:
HAPPY BIRTHDAY, J!!

It's funny but I'm always referring to my son as the "little" guy here but I don't call him that in "real life".  It may occasionally be my big guy or "big man" when I'm talking to him.  But I am the queen of nicknames so I call him by many things.

In all seriousness, he is growing up so fast!  Having a child speeds up time (and ages you) like nobody's business!  We were at the library the other day  checking out a few books when the lady asked him what grade he'll be going into next Fall.  When he answered "third", she was really surprised and said: "weren't you just in kindergarten!"  That just about sums it up because it really was yesterday that he was in kindergarten and now he's finishing second grade and looking forward to third.
So here we are again, another milestone!  A child's birthday is a major thing.  We did some celebrating on Saturday since his birthday, today, is a school day.  I wanted to make a few treats for the special occasion.  I'll be posting the recipe for the ice cream cake next - it's very similar to the one I made last year.

As per the birthday boy's request, I also made Ninjago cupcakes again, this time in blue and green.  He was really into Ninjago for a while and is still a fan (he'd love some new episodes to watch but it seems the TV series was a short one).  He actually asked if I could make gold ninjas but since I don't have gold food coloring, he settled for these.  The recipes and directions for the cupcakes are available in an old post. 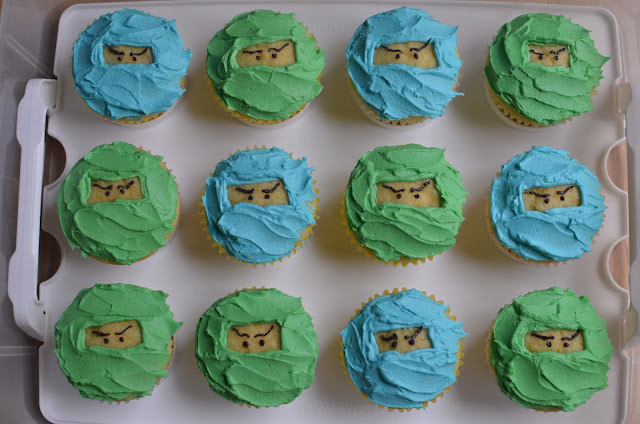 I think he got a kick out of these little treats; I feel like I'm the real beneficiary to get to see the quirky smile on his face!  And he was a good sport, taking some pictures with us earlier in the day so I can blog about it here.  When it came time to blow out the candle and actually dig into our birthday goodies, we switched over to Star Wars disposable tablecloth and plates!  With a few old-school streamers floating overhead, it was a festive little celebration.  Happy birthday, sweetie pie! 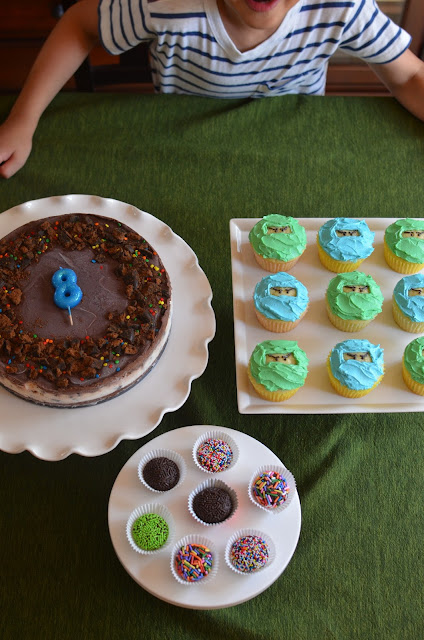 My first boss out of college is something of an expert on Brazil.  He used to vacation there at least 2-3 times a year but while he educated me plenty about Caipirinhas (the drink), Carnival, and women's beach attire, he never did mention brigadeiros.  So while I can't personally confirm whether they really are such a staple at children's parties, it sure sounds like a good idea to me! 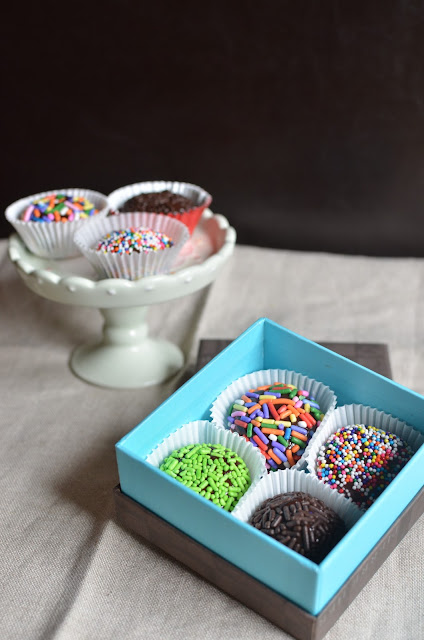 The cool thing about brigadeiros is they are made with just 3 main ingredients: sweetened condensed milk, a little cocoa powder, and a bit of butter, plus toppings such as sprinkles of your choice to roll them in.  As you can tell from the ingredient list, they are a cross between fudge and caramel.  As my son would tell you: "they are fudgy, 'caramelly', and chewy."  He really liked them and you can see they are appealing to children on looks alone.  Upon trying one, I think his exact words were "mmmm....mmmm" with a nod.  The birthday boy approved.  To me, they're a sweet sentiment and just fun to look at because sprinkles tend to make people smile, don't you think?


These birthday bonbons are sweet little treats.  I made half a recipe for just a handful to have on-hand as a birthday sentiment.  With only 3 ingredients, the trick to this recipe is to watchfully cook the ingredients together over medium-low to low heat, stirring constantly with a wooden spoon, until you reach the right consistency.

The right consistency is where the mixture thickens and holds together, no longer liquid and spreading loosely when you stir.  You'll feel the resistance as you stir when it's ready.  Plus, it will be shiny and thick and dense.  You want to be able to pinch a bit together, roll it round, and have it stay in the shape of a ball without spreading.  This was my first time making brigadeiros and I'm no expert but I think it turned out fairly well. 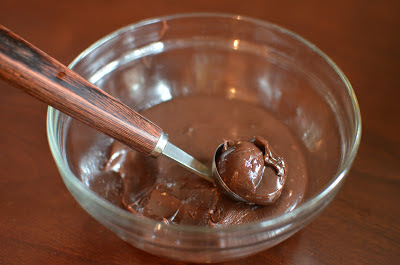 It should be ready in a little over 10 minutes.  As I got closer, I turned the heat down to make sure I didn't burn any at the bottom of the pan (particularly since I was working with a small amount).  When it's done,  transfer the mixture to a greased bowl, let it cool, and then scoop away. 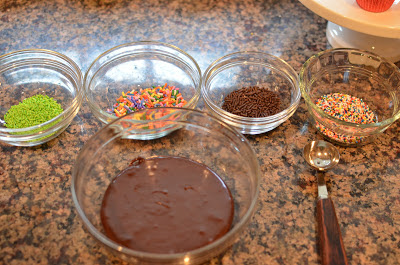 The fun part is in decorating.  I choose some sprinkles and I think colorful ones are ideal for a child's birthday.  Mine came out nearly 1 1/2 inch round.  It might be a good idea to make them a little smaller since they are sweet bites and you probably don't want kids to have too many but I wanted them to fit the paper candy liners/baking cups that I had. 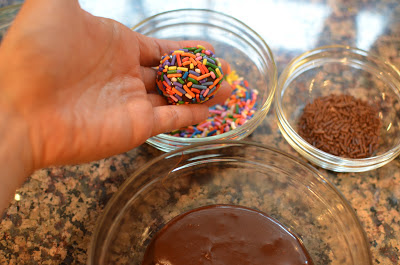 I found a greased melon baller worked really well for scooping out some of the candy.  Then I rolled it in clean, greased hands to shape into a ball before rolling them thoroughly in sprinkles.  You can get creative with your topping.  Rather than sprinkles, try any other typical truffle toppings such as cocoa powder, confectioners' sugar, chopped nuts, or even coconut flakes.

Keep the brigadeiros in the refrigerator if you're not serving them right away but be sure to leave plenty of time to bring them back up to room temperature before serving so that they are soft and chewy in the center like they should be. 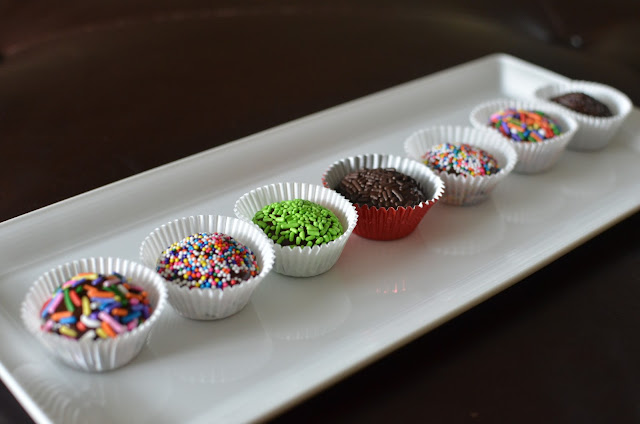 Lightly grease a bowl or baking dish and set aside.

Stir the sweetened condensed milk, butter, and cocoa powder together in a medium-size saucepan.  Cook over medium-low heat, stirring continuously with a wooden spoon.

Cook, stirring constantly, until mixture thickens enough where it comes together and no longer spreads in the pan.  Lower the heat slightly towards the end as it thickens, if necessary.  When done, it will be thick, dense, shiny, and you'll feel resistance as you stir.  (It's important to cook it enough so that it holds its shape when you form the balls.)  This should take a little over 10 minutes.

Transfer the mixture to the greased bowl and let cool to room temperature.  You can place it in the refrigerator to speed up the process.  Lightly grease a spoon or melon baller as well as your hands.  Scoop out a round of the mixture and roll it into a 1 to 1 1/2 inch round ball (or whatever size you prefer) with your hands.

Roll the candy thoroughly into sprinkles or other topping of your choice and place each one into a paper candy cup or liner.  If not serving right away, store brigadeiros in an airtight container in the refrigerator.  Make sure to bring them to room temperature before serving so that the bonbons are soft, fudgy, and chewy in texture.