I had some extra heavy cream in the refrigerator the other day after making ganache for the brownie cake and decided I'd try a do-over and make chocolate panna cotta again.  I posted about it back in April 2011 when I first started this blog.  Back then, I was motivated to make it after having a delicious version of it at a nearby Italian restaurant.  Since my husband enjoyed it so much, I tried recreating it at home.  Unfortunately, it didn't come out nearly as well as the restaurant version.
The main problem I had last time was I didn't get the chocolate to melt thoroughly into the cream and milk mixture.  I ended up with a darker top layer where the chocolate kind of sank into (the top is actually the bottom since it's flipped over when you unmold the custard) and a paler base.  I really wanted to see if I could get the custard smoother and achieve a more even result the second time around.

This time, I adapted a recipe from the William Sonoma website.  Because I didn't want to go overboard with the richness (we are talking about a dessert whose name translates into "cooked cream"), I used cream and a little bit of milk and skipped the mascarpone cheese.  The recipe isn't all that different from the last one I tried.  The main thing I wanted to do was try to incorporate the chocolate more fully throughout. 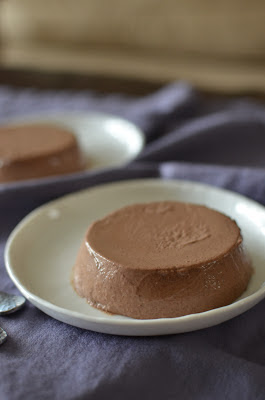 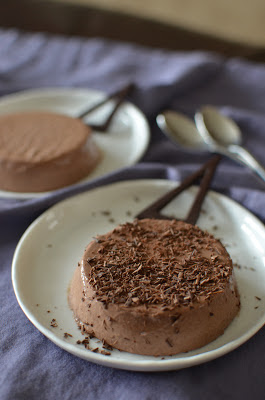 When I added the chopped dark chocolate into my cream and milk mixture, I had the same problem I faced last time.  The chocolate doesn't fully melt and you see specks and grains of chocolate in the mixture.  This time, I put the saucepan back on the flame, on the lowest possible setting, and continued to whisk it until the chocolate melted some more and the whole thing thickened further.

I seriously think I'd need to call in the blender or go at it with an immersion blender to completely smooth it out because dark chocolate can be difficult to melt in this way (in David Lebovitz's ice cream book, the Philadelphia-style chocolate ice cream mixture needs to be processed through a blender because of that very issue with the chocolate).  I took the simple way out and just kept whisking away on the stove top until it was as smooth as possible.  It also helps to strain the custard through a sieve as a final step - something I didn't do last time. 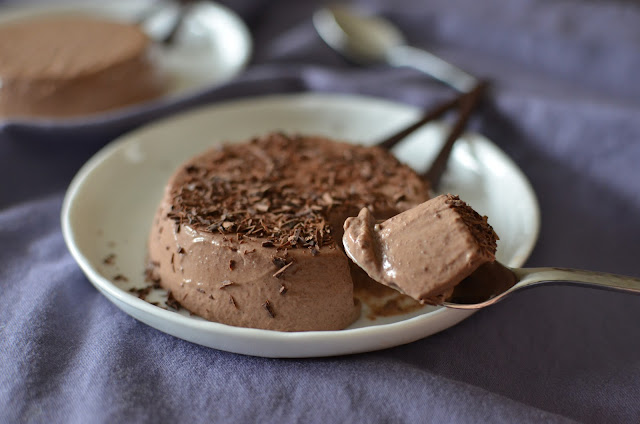 I was much happier with my redo.  This panna cotta came out a whole lot better than the first.  No funky sunken chocolate or uneven layers this time; the chocolate is fairly distributed throughout (though not perfectly).  In my memory, it's still not as good as the restaurant version but I'm happy with this and my husband enjoyed it.  I think I can now close the panna cotta chapter of this blog for the time being.


Panna cotta is an Italian custard made by cooking cream and, in some cases also milk, with a bit of sugar and other flavorings.  A chocolate one obviously involves a little chocolate (I also throw in a pinch of instant espresso powder); others might simply call for some vanilla.  To make the custard set, we use a little plain gelatin.

I made 2 small servings, about 4 ounces each.  Since these are so rich, a little goes a long way.  Instead of all cream, I "lightened" it up with a little bit of milk.  I went about 70% cream, 30% milk in this case purely to use up my leftover cream.  You can go as far as half and half, and literally use half-and-half in the recipe.

As I mentioned, the trick with the chocolate panna cotta seems to be in getting the dark chocolate to melt thoroughly.  When the cream and milk mixture comes to a near boil, add the chocolate off heat and whisk to combine.  As you see in the photo on the right, there are quite a bit of chocolate specks in the mixture. 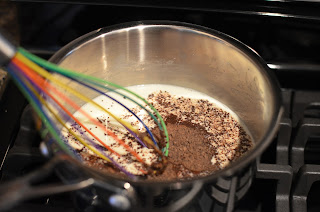 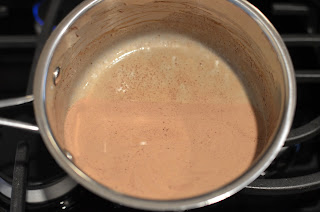 I put the pan back on the heat, on the lowest possible setting so as not to scorch anything, and continued to whisk constantly until the chocolate melted further and the mixture thickened (below, left).

When that's done, stir in some gelatin that's been dissolved in a little bit of cream or milk.  Another thing I found useful in the recipe is to strain the mixture through a sieve before dividing it into the serving dishes.  Straining it is another step that helps give us a smoother custard. 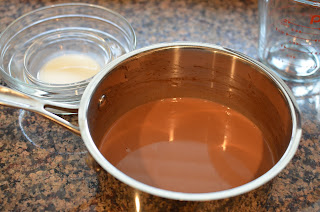 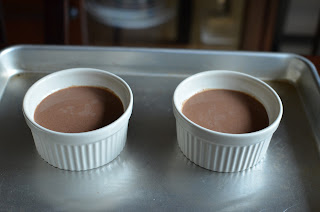 Refrigerate the panna cotta for at least 3 hours or overnight.  To remove, set them in a bowl of warm water for 5-10 seconds (not too long or the sides will start to melt), then run a knife around the ramekin before inverting onto a chilled plate.  I think it's a good idea to pop the plated panna cotta back in the fridge for a few minutes to firm it back up.  Chocolate shavings and other embellishments are totally optional. 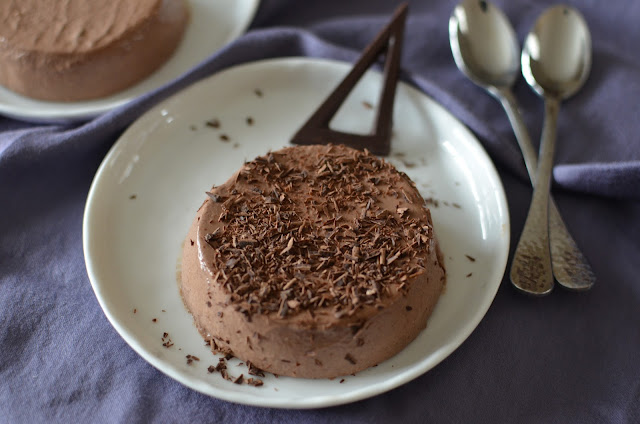 Chocolate Panna Cotta (for two)
Adapted from this recipe on William-Sonoma.com

Place 2 tablespoons of the cream in a small bowl and add the gelatin.  Let sit for about 10 minutes until gelatin softens.  Place the bowl into a larger bowl filled with hot water and stir until gelatin dissolves.  (Use hot, not boiling water; if using glass bowls, the smaller could crack if not heat resistant.)

Pour the rest of the cream, the sugar and salt into a small saucepan and cook over medium-low heat until it just comes to a boil.  Remove the pan from the heat and add chocolate and instant espresso powder, if using.  Whisk until smooth.  If, like me, you still see chocolate grains in the mixture, return the pan back to the heat under the lowest possible flame.  Whisk constantly, removing the pan occasionally from the flame to avoid over-heating, until chocolate is melted and mixture is as smooth as possible.

Remove the pan from the heat and add the gelatin mixture to the chocolate mixture, stirring until blended together.  Pour the mixture through a fine strainer into a measuring cup.  Divide custard among the two prepared ramekins.  Let cool to room temperature.  Then, cover loosely and refrigerate for at least 3 hours or overnight to allow the custard to set.

To unmold the panna cotta, set the bottom of the ramekin into a bowl of warm water for 5 seconds or so.  Run a knife around the sides of the ramekin a couple of times and invert it onto a chilled plate.