There's a bakery in my town that sells a small round "brownie cake" among their offerings.  It has a thin layer of chocolate frosting on top and a festive crown of sprinkles around it.  When I first saw it, I thought "what a cute idea", followed quickly by "I can do that".  So here is yet another way to enjoy brownies - one of the most satisfying chocolate desserts ever invented.  We've already done pie so now let's do cake.  This is my little "knock-off" of that bakery's brownie cake. 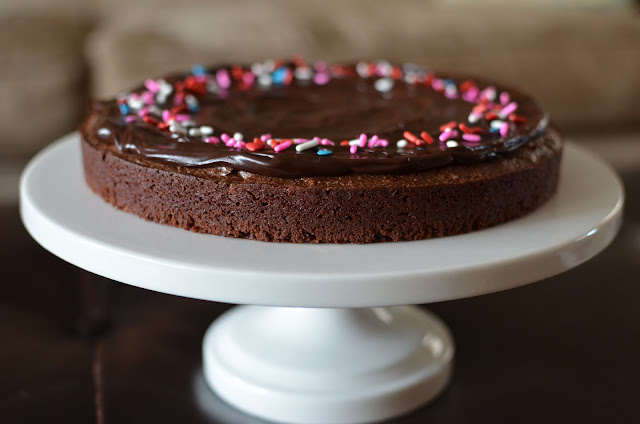 This is really simple and straightforward.  I'm not sure if theirs is done the same way but mine is literally a brownie.  I used a good brownie recipe and instead of the typical square baking pan, I baked it in an 8-inch round cake pan.  A springform pan would make life a lot easier but since mine measures 9 inches, I think the cake would be too thin.  Just make sure to line the bottom of your cake pan with a round of parchment and grease the sides and you should not have a problem removing the cake. 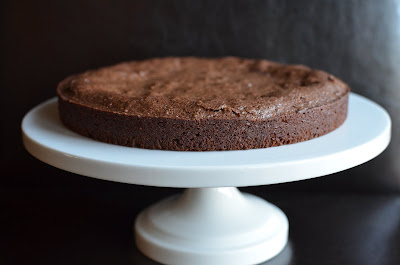 Once the brownie is baked and cooled, I added a thin layer of dark chocolate ganache, my frosting of choice. 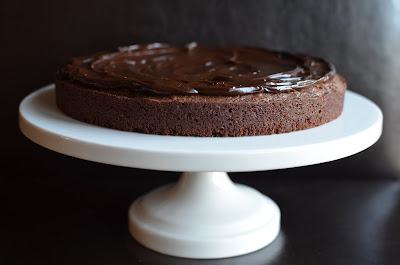 And since Valentine's day is coming soon, I decided to make this an early Valentine's Day dessert with some appropriate sprinkles.  It looks a bit like a giant chocolate donut from some angles!  The thing I like about it is not only does it make the everyday brownie a little bit more special, it's also rustic and casual enough to just pick up and eat too. 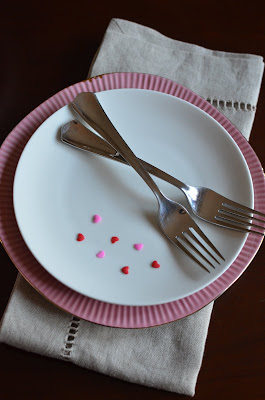 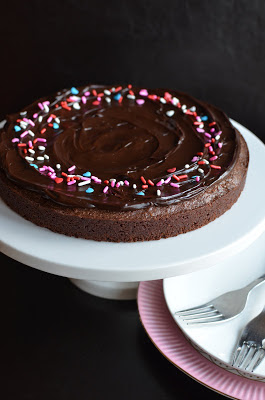 I used Smitten Kitchen's favorite brownie recipe, similar to the peppermint brownies I experimented with over Christmas, and it was a good decision.  The brownie is rich, with deep chocolate flavor; it's heavenly moist and fudgy in the center, with a bit of chew and crispness all along the edges.  It actually tasted very much like those Fat Witch brownies (the ones I buy at the actual bakery) that I love so much.  Very satisfying stuff!

If you ask me, a good brownie like this one needs no adornment (except maybe vanilla ice cream) and already has plenty of chocolate flavor.  I wouldn't normally add frosting but it's appropriate here since we're going for "cake".  You won't hear any complaints about frosting from kids.  I'll never forget a playdate a couple of years ago when I offered up some brownies.  My son's friend looked at it, a little puzzled, and asked me where the frosting was?  I told him I don't usually put anything on top of brownies and he looked a little surprised and dismayed.  He told me he and his babysitter make brownies together and add frosting and sprinkles too.  Well, I think he would approve of this version...I know my son did. 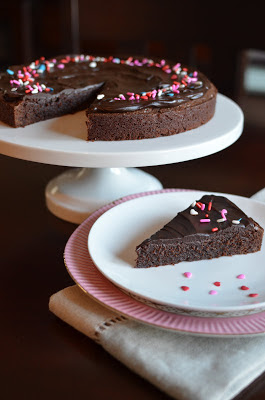 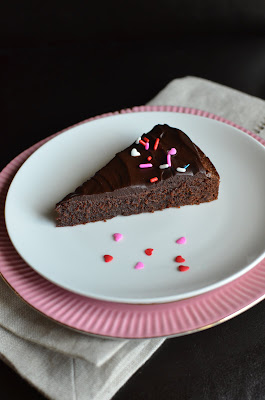 Now about Valentine's Day...I just love it!  When I feel bummed that the holidays are over, I console myself with the fact that at least Valentine's day is around the corner.  I love the hearts, the chocolate, the expressions of love and sweetness.  I hope you'll do a little something sweet for yourself that day and hopefully share it with someone you adore.

This recipe is straightforward, one of those terrific whip-by-hand brownie recipes that make brownies so irresistible.  I only have a couple of notes on this cake version:

- If you have an 8-inch springform cake pan, by all means use it.  It will make removing the brownie-cake a snap.  If you use a regular cake pan like I did, grease the entire pan with butter and line the bottom with a round of parchment (you can lightly grease the paper but it's not absolutely necessary).  To remove the cake, I let the brownie/cake cool in the pan until about room temperature.  Run a thin bladed knife all around the sides of the cake.  Then place a cool rack over the cake and invert it.  Give it a little push if you need to and the cake should release. 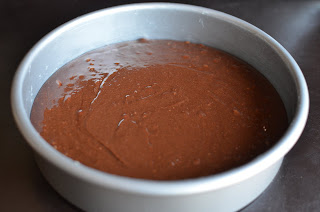 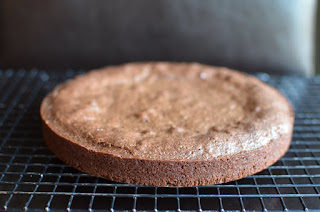 I actually thought about dividing the recipe in half and making a small 6-inch cake, partly because the one at that bakery seemed smaller than the typical 8-inch.  But when I looked at my teeny 6-inch pan and remembered that we're talking about brownies, I threw that idea aside.  Brownies go quick and this brownie keeps well, wrapped at room temperature, for several days.

- When it comes to the frosting, a little goes a long way.  The brownie is very rich and packs a wallop of chocolate flavor (thanks to unsweetened chocolate) so that the frosting actually gets a bit lost anyway.

I used 2.5 ounces of semisweet chocolate and an equal amount of cream to make the ganache.  I think I could've gotten away with using 2 ounces of each.  Let the ganache cool until thickened but still soft and smooth enough to spread.  Don't wait too long to check on it in case the ganache sets and you'll need to re-warm it to spread on the cake. 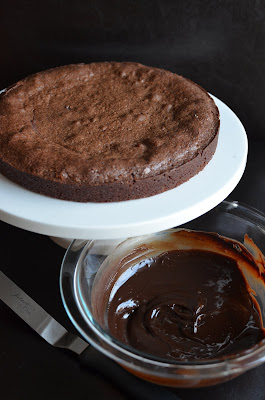 Drop the ganache right into the center of the cake and push it out almost to the edge of the brownie.  Sprinkles are optional (and fun). 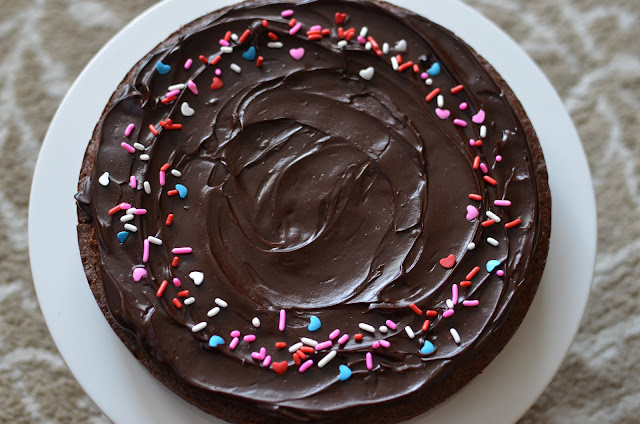 This cake can be a bit "fancy", sliced and served on a plate with a fork.  I also found that instincts take over and I just want to pick it up with my hands and dig in!  You can cut very thin, mini slices of this cake to serve as a little nibble for guests to pick up and eat.  Mini slices look really cute - particularly with a little heart shape sprinkle poking out of the frosting. 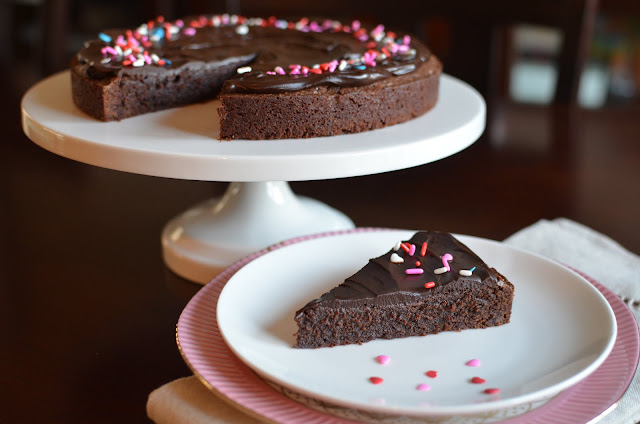 - For one 8-inch round brownie cake -

Grease an 8-inch round springform or regular cake pan and line the bottom with a round of parchment paper.  Preheat oven to 350 degrees.

In a heatproof bowl set over a pan of just simmering water, melt the chocolate, butter, and instant espresso powder if using.  Remove the bowl from the pan and whisk in the sugar.  Whisk in the eggs, one at a time, then the vanilla and salt.  Stir in the flour using a rubber spatula.

Scrape batter into the prepared cake pan, spread evenly and smoothing the top.  Bake for approximately 25-30 minutes, or until a toothpick inserted into the center comes out mostly clean.  Avoid over-baking; a bit of moist crumbs is fine.

To make the ganache, heat the cream and corn syrup to a light simmer.  Pour over the chocolate and let sit for a minute.  Whisk, from the center outward, until smooth.  Let sit, stirring occasionally, until ganache thickens slightly but is still smooth enough to spread.

Scrape the ganache over the cooled brownie cake and use a small offset spatula or knife (a spoon works too) to spread the frosting almost to the edge of the cake.  Garnish with sprinkles, if desired.