I'm interrupting our regularly scheduled sweet programing to talk...soup.  I made butternut squash soup today - certainly nothing earth-shattering but a first for me.  I liked it so much I wanted to put the recipe down here so I can pull it up whenever I need it. 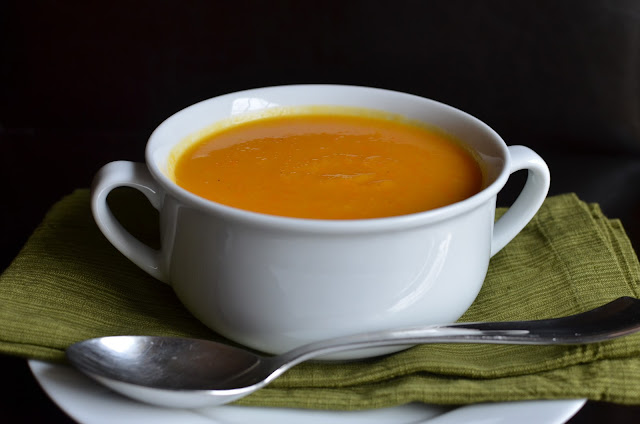 It's been bitterly cold here the last few weeks and as I sit here writing this, they're talking about a big blizzard coming our way.  The New England area could be hit with as much as 2-3 feet of snow while predictions for New Jersey are in the range of 10-12 inches right now.  Schools have already announced early closing tomorrow.  I hang my head in defeat hearing all this and just hope there are no power outages or gas shortages again.

So it was a good day to make soup.  It's comforting and I've been wanting to make butternut squash soup for a long time.  What I love is that thick, creamy sweetness you get without needing to use cream or any other dairy.  It's satisfying, hearty and good for you at the same time. 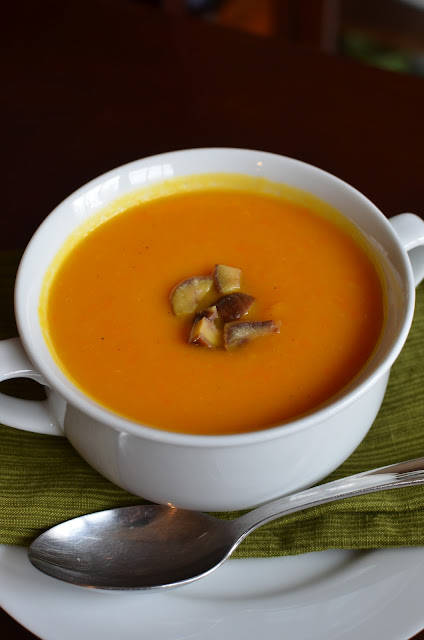 I probably looked at half a dozen recipes before making my version.  In the end, I took the basic premise of simmering butternut squash in broth with some aromatics in the form of onions,  carrots, and garlic, and then took inspiration from my cupboard.  I added a pinch of saffron (because it makes everything better, particularly anything involving broth), some paprika, ginger, and a bay leaf.

And I finally put my immersion blender to good use.  I've had that thing for years, probably got it over ten years ago when I got married.  I haven't thought much about it until I read somewhere recently that an immersion blender was more useful than a blender!  That got me digging mine out and I've been using it to chop small amounts of nuts and now, finally, to blitz up this soup.  It works like a charm!  If you have an immersion blender, I highly recommend it for soups like this.  It is far neater, quicker, and more convenient than using a blender. 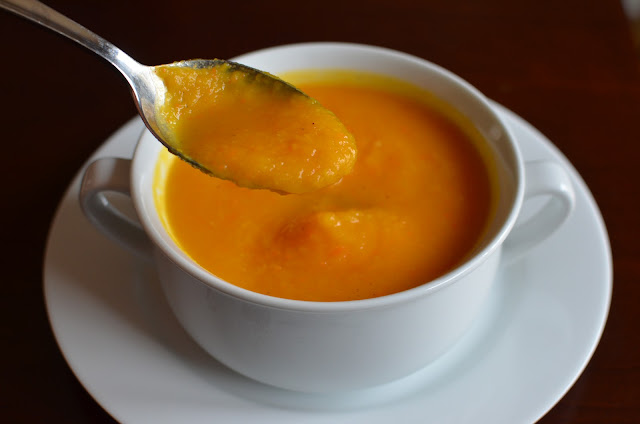 I like my butternut squash soup kind of chunky and hearty like this.  Others, including children, might prefer a thinner soup, in which case just puree it further and add a bit more broth if necessary.  I took inspiration from a restaurant nearby that serves a delicious creamless pumpkin soup and added some chopped chestnuts as a garnish like they do to my butternut squash soup.  I just used ready-to-eat chestnuts I buy at the Asian market.  The chestnut complements the flavor of the soup and adds a little extra texture to it that works really well.

They say that people who cook are more creative, free-thinking than those who like to bake.  Bakers are rule-followers.  I've noticed that when cook, I hardly ever use a recipe but I don't think I have a single dessert recipe committed to memory.  I've always been more of a draw-within-the-lines kind of a person but I'm trying to shake that up a bit.  And when I do try something new on the savory side and it works, like this soup today, it is a really good feeling!  That said, I'll be returning to chocolate tomorrow and baking a cake.  We need chocolate cake when a storm is coming...

As with anything else, I found many versions of butternut squash soup and what I ended up with is a fairly simple version and based on ingredients I like and have on hand.

I built the soup on the basics of butternut squash, onions, carrot, and garlic.  I added saffron for that amazing and hard-to-describe flavor and threw in some paprika and a bay leaf.  If I had some mild curry, I think it would work well here but since I didn't, I went with grated ginger for that peppery kick that I love. 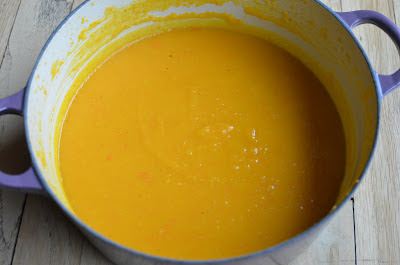 One more thing: to clean and chop a butternut squash, I first chop off the ends for a flat surface to stand the squash on.  Then, I slice it in half, de-seed it with a spoon, then peel it with a vegetable peeler.  Finally, I dice it into 1/2 to 1 inch cubes.  I write all this down not because I'm any expert but because I want to remember how I did it should I forget, which I tend to do...

Butternut Squash Soup
Adapted from many versions including this one

Add oil to a large dutch oven or stockpot and heat over medium heat.  Add onion and garlic, cooking until softened, about 6-8 minutes.  Add grated ginger, saffron, paprika, bay leaf (if using), along with the carrot and butternut squash, stirring well to combine.  Add broth and bring to a boil.  Once the mixture comes to a boil, reduce to a simmer and cook, partially covered, for about 20 minutes or until squash is fork tender.

Remove soup from the heat and let cool slightly.  Remove the bay leaf.  Puree with an immersion blender until smooth (or you could do it in batches, carefully, using a blender).  If you find that the soup is too thick, add a splash of broth.  Season with salt and pepper, to taste.

Ladle soup into bowls and serve hot.  You could garnish the soup with some chopped chives or maybe a dallop of yogurt.  I like adding some chopped chestnuts on top of the soup.  For a little bit of crunch, you could also add a sprinkle of chopped nuts.