What do peonies have in common with brownies? 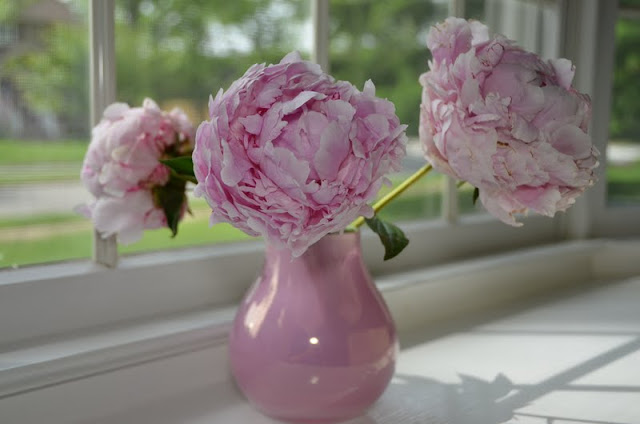 Well, nothing really...Except that when I think of peonies, I call them paper flowers because I remember making these flowers out of different color tissue paper when I was a kid at school.  They were so pretty.  And I'm nostalgic about brownies in a similar way.  I only spent a part of my childhood here in the States, having just arrived here from Hong Kong at eight years old.  But I'll be forever thankful that I met the very awesome, American brownie. 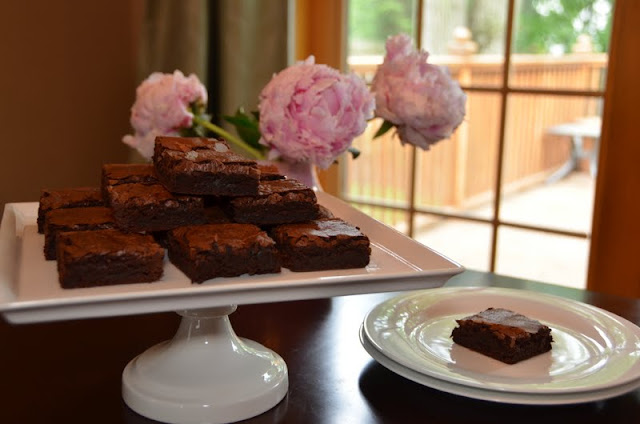 As a chocolate lover, brownies are one of my favorite treats of all time.  I am no snob but I'm generally pretty picky about dessert (and food in general).  But I have rarely met a brownie I didn't like.  To me, even the bad ones are pretty good.  I guess it's the simplicity that I love and the fact that it's all about the chocolate.  I also love that brownie texture, or that chewy bite you get when you sink your teeth into it.  It also helps that whenever you see brownies on the dessert menu - pretty often at one of the restaurant chains - it always comes with a scoop of ice-cream on top and maybe some chocolate sauce too.  Now, who can complain about that... 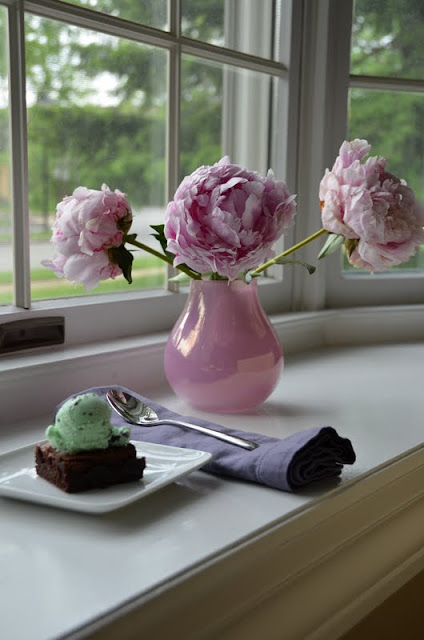 I love anything that gives me an excuse to eat ice-cream.  Whenever my son gets a brownie dessert as part of his kids' meal, I can't help but sneak a few bites.


My ideal brownie is soft and fudgy, maybe a little warm.  Of course, it should be full of deep chocolate flavor.  If you like this kind of brownie, you'll probably enjoy the double chocolate cookies I talked about in a previous post.

﻿﻿﻿﻿﻿It's not that I've done a ton of research but I think the best brownies I can think of are from Fat Witch Bakery in New York City.  My favorite "witch" is their walnut one.  It's so moist, rich and fudgy, with a great scent of vanilla (or I think that's what it is) - it's very excellent.  Since I can't stop by all the time to get one, I've bought their mix to try at home.  While it's fairly similar to the fresh ones from the store, I definitely prefer a fresh variety.  So I like to make a homemade version at home.  In reality, I'm almost afraid to know the actual recipe of some of these store-bought or restaurant treats.  I have a feeling it probably uses twice the amount of butter than we think it does.  Maybe some things are better left unknown and just kept as rare indulgences for when we go out.

For the longest time, I made brownies out of a box mix.  Mostly because it was what I was used to, I thought it tasted pretty good, and because most brownie recipes I'd seen seemed to use an exorbitant amount of butter and I just didn't have the heart to execute on it.  But I've found this brownie recipe that I really like, which uses a fairly reasonable 6 tablespoons of butter (less than a stick, which has 8 tablespoons), and makes a brownie that has deep chocolate flavor using both chocolate and cocoa powder.  On top of that, I add in a touch of instant espresso powder to amp up the chocolate flavor even more.

Let's get down to the nitty gritty of making these brownies.  First, start by prepping your pan.  I use a 9x9 baking pan but this recipe calls for an 8-inch square pan.  Either is fine though we'll have to adjust the baking time later depending on the pan.  Now, this is a great little trick.  Butter the pan and line it with a piece of parchment paper, leaving about a 2-inch overhang on 2 sides.  Then, butter the parchment paper as well (no need to butter the overhang since it's only used to help you lift out the brownies later.)  For the longest time, whenever I made brownies, I would just grease the pan and never use the parchment.  Then, I'd cut the brownies out from the pan itself (that's why you see the scuff marks in the pan below).  With the parchment method, the brownies will lift out beautifully. 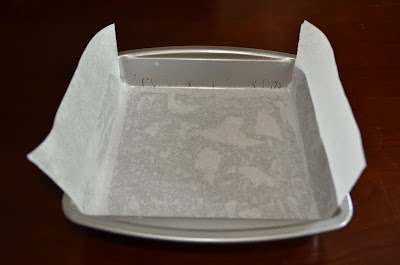 Place the chocolate, butter, cocoa powder, and instant espresso powder (if using) into a heat safe bowl over some simmering water to melt.  Set this aside to cool slightly; the chocolate mixture will be fairly thick. 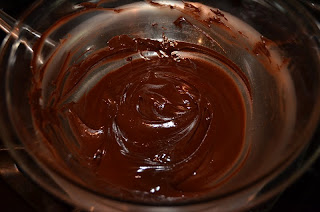 Get the dry ingredients ready by whisking the flour, baking powder, and salt together.  I love it when it's so easy where no sifting is involved. 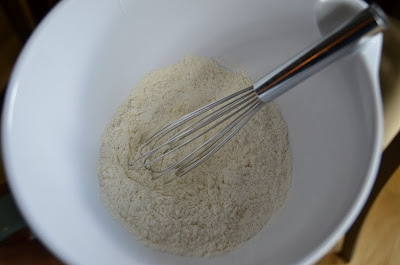 Now place the whisk attachment onto the stand mixer.  Add sugar, eggs, and vanilla into the mixer bowl.  I'm not totally sure about this but I think this is the part that creates that crackly top on the brownies.  You mix this mixture on medium speed for a good 4 minutes until it turns very pale in color and it has incorporated lots of air. 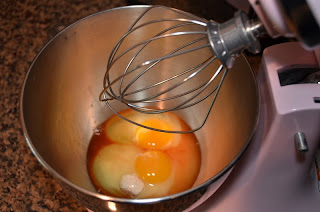 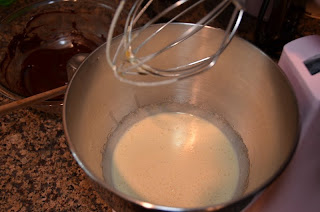 Add the chocolate/cocoa powder mixture into the bowl and mix until combined.﻿ 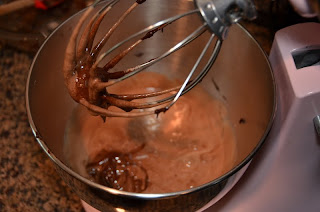 On low speed now, add the dry ingredients gradually and mix until fully combined.  Go in with a rubber spatula and scrape the sides of the bowl to make sure there are no pockets of flour.  The finished batter will be quite thick. 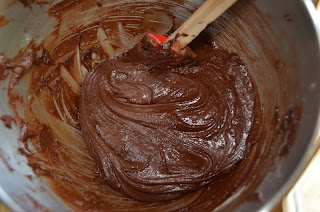 Spread the batter into the prepared, parchment-lined baking pan, smoothly out the top. 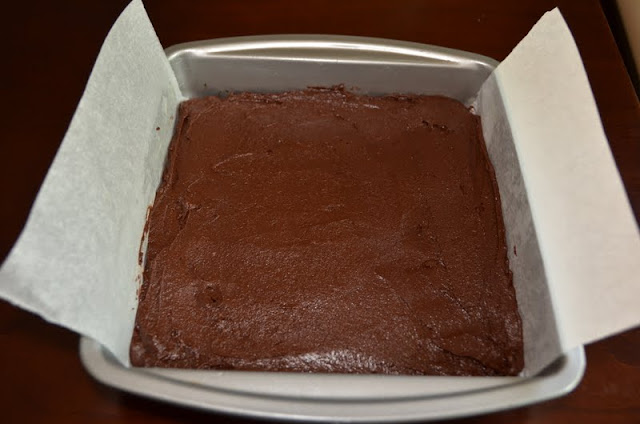 The recipe calls for baking in a preheated 350 degree oven for about 35 minutes, or until a cake tester or toothpick inserted into the brownie comes out with just a few crumbs but is not wet (we want it to be done but still moist and not dried out).  Remember, this recipe uses an 8-inch square pan.  I find that since I am using a 9-inch pan, mine are done in about 25 minutes.  So depending on the pan size you are using, check accordingly and early to be on the safe side.  You don't want to over bake to the point where the brownies dry out too much and you lose that soft fudgy center.  You can see where I inserted a toothpick and tested the brownies before taking them out of the oven.  Once cooled, the brownies lift out very easily using the parchment. 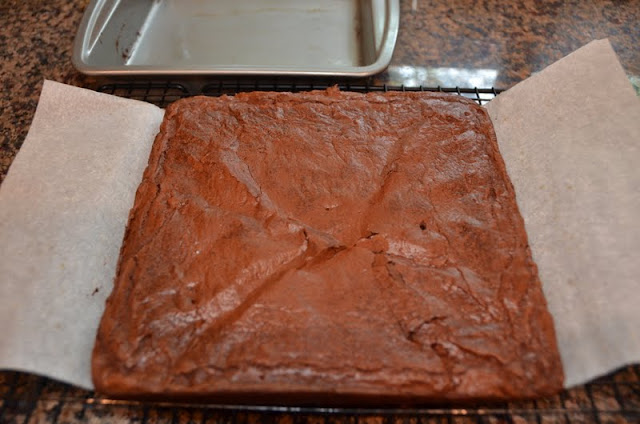 Let brownies cool completely and slice with a hot knife.  I like to cut mine into 16 small squares. 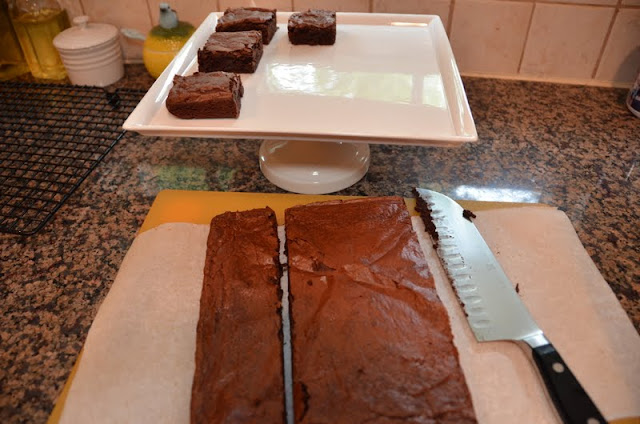 It's ready to eat just plain... 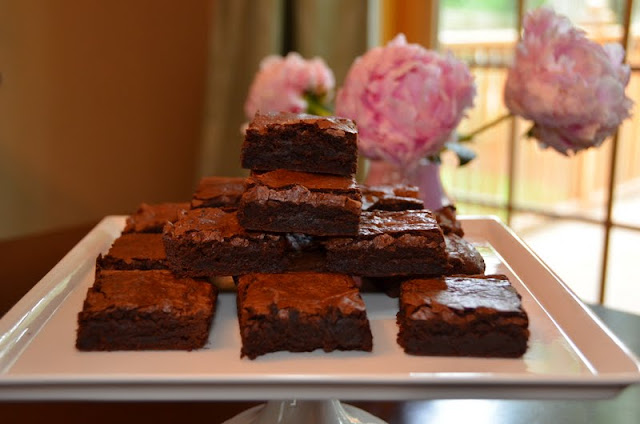 ...or with some ice-cream.  If you're having it the next day with ice-cream, warm the brownies up for about 10 seconds in the microwave. 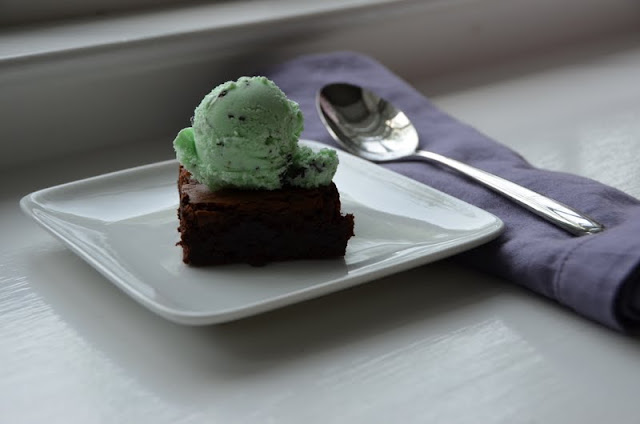 While I was trying to snap a quick picture of this, our little one was in the background saying "can I eat it now?  can I eat it yet?"  It was hard to keep his hand off of it for more than a minute.  He definitely inherited our love of chocolate.  Here he is finally getting the taste-test.﻿﻿﻿ 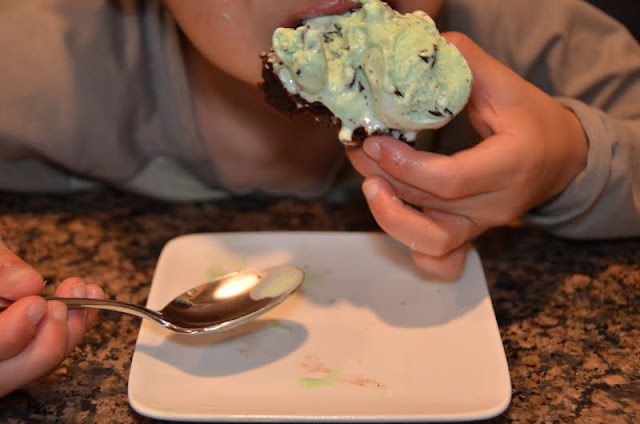 Not only did I have to add an extra scoop of ice-cream for him but he had another brownie right after as well!  I make him eat lots of golden delicious apples to balance out the chocolate intake.

Preheat oven to 350 degrees.  Line a buttered 8-inch square baking pan with a piece of parchment paper that has allows for about 2 inches of overhang on two sides.  Butter the parchment paper.

Put butter, chocolate, cocoa powder, and instant espresso powder (if using) in a heat-proof bowl.  Set the bowl over a pan of just simmering water, stirring occasionally, until chocolate and butter are melted.  Set aside to cool slightly.

Put sugar, eggs, and vanilla in the bowl of a stand mixer fitted with the whisk attachment.  Beat on medium speed until mixture turns pale in color, about 4 minutes.  Add chocolate mixture, beating until combined.  Add flour, beating until just incorporated, and scraping down the bottom and sides of the bowl as needed.

Pour the thick batter into the prepared pan.  Bake until a toothpick inserted into the center of the brownie comes out with a few crumbs, approximately 35 minutes.  Avoid over-baking (if you are using a 9-inch square pan, the baking time should be closer to 25 minutes).  Remove the brownies from the oven and let cool for about 15 minutes.  Then, lift out the brownies using the parchment overhang and let cool completely on a wire rack before slicing.


*There are so many variations of brownies.  You can make it more fudgy and decadent by adding a couple more tablespoons of butter.  But this is good enough for me.  You can also stir in some mini chocolate chips or walnuts into the batter before baking.