There are so many things I've yet to bake that I would like to try.  I have quite a long list and biscotti is one of the things on that list.  After the somewhat decadent chewy chocolate cookies, I thought it would be nice to change things up and go for something lighter and with a far different texture.  The result is this almond biscotti. 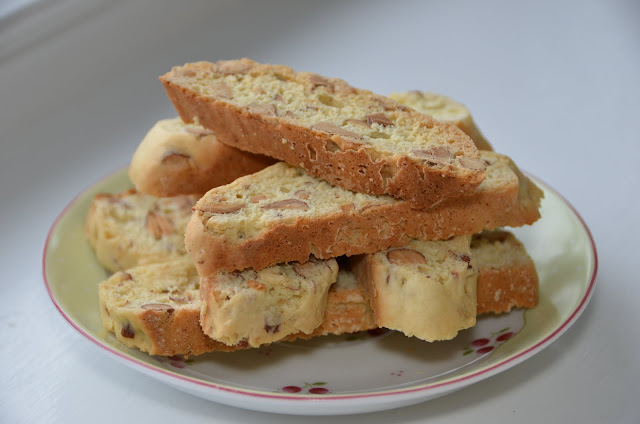 While a biscotti hardly ever makes anyone moan with pleasure, it's a nice accompaniment to a cup of coffee, tea, or hot chocolate.  That crunch and the nuts make it a great little pick-me-up.  Can't you see yourself on a Sunday afternoon sipping a coffee with an almond biscotti or two? 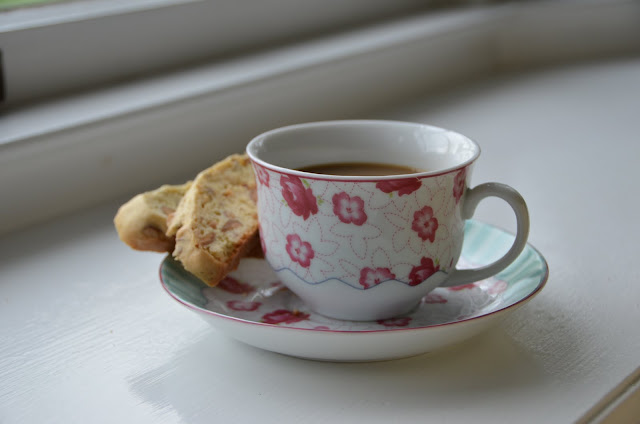 I love to order biscotti when I'm in a coffee shop.  I've always enjoyed them and it's partly because they feature something I love a lot - nuts!  Almonds are technically not a nut (I think it's considered more along the lines of a seed) but I love almonds all the same.  I remember when I was a teenager back in the early 90's, my sister and I used to love this Dolly Madison "Rocky Road" ice-cream.  It was chocolate ice-cream mixed with lots of almonds and had some marshmallow swirls running through (you could hardly taste the marshmallows, which was good since neither of us like them).  It's too bad they don't make it anymore.  Or maybe it's a good thing because the two of us used to do major damage to a quart in one afternoon and we're no longer teenagers.

Back to biscotti: almond biscotti is the model biscotti for me.  But as much as I enjoy them, I've never made my own.  Frankly, I felt the packaged biscotti we can all buy (you know the ones that are purportedly made by someone's "nonna") tasted fairly good so I wasn't sure it was worth the effort of making my own.  But those long expiration dates haunt me and encourage me to try making some myself.  So I've finally done it. 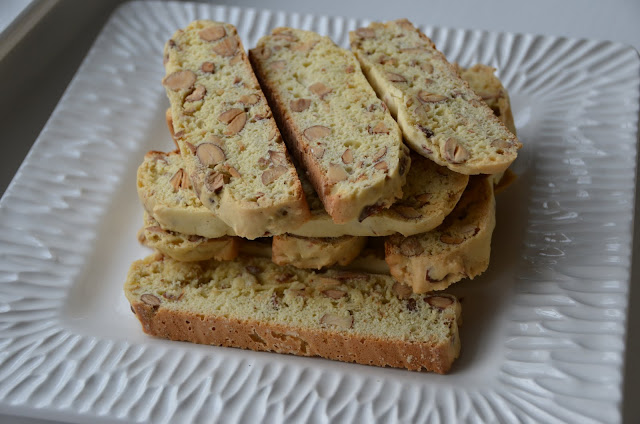 I am really excited about this experiment!  Making something you've never tried before is always exciting.  There's the promise of something potentially great as well as the threat of possible disaster.  While I was making this batch of biscotti, I felt a little of both.

Before starting, I searched around for ideas on a good almond biscotti recipe.  I knew I wanted to make the traditional kind, without butter (keeping it nice and light).  And the result I came up with is an adaptation of David Lebovitz's "Almond and Chocolate Chunk Biscotti" recipe found in his book, Ready for Dessert.  With his background as a professional pastry chef, David Lebovitz writes about his life in Paris and shares recipes through his books and blog by the same name.  Ready for Dessert is a great book (I wish there was a photo for every recipe but I know that's asking a lot) and I see quite a few recipes I'd like to try (and will).

In this biscotti I'm making, I'm not using any chocolate.  Chocolate is wonderful but I'm taking a chocolate break and going for a clean nutty flavor this time around.  Also, I really want to focus on the almond flavor so I'm adding some almond extract and cutting down on the amount of vanilla extract used in the recipe mentioned above.

First, we start with the almonds.  I'm using 1 and 1/2 cups of toasted almonds.  I bought mine already dry roasted and unsalted.  If you can only get raw almonds, you'll need to toast them in a 350 degree oven for about 10 minutes or in a skillet over a medium flame, moving them around frequently.  Coarsely chop them up.  You want to have nice chunky pieces of almonds throughout your biscotti. 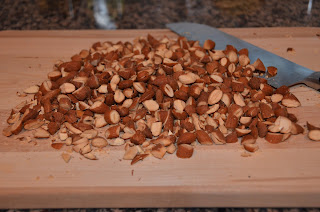 There are just 2 dry ingredients to mix together, 2 1/2 cups of all-purpose flour and a teaspoon of baking powder. 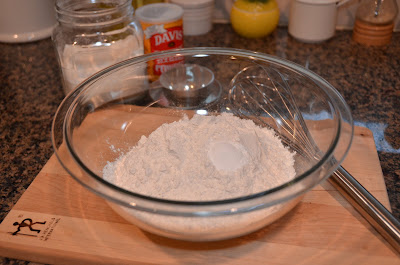 ﻿In the bowl of a stand mixer, add 1 cup of sugar and 3 eggs.  I also used 1/4 teaspoon of vanilla extract and 1/2 teaspoon of almond extract in my batch of biscotti.  I love almond extract (that smell is so amazing) and I'm eager to find more recipes to feature it in.  After tasting the result, I think I'd use even more almond extract, about 3/4 to 1 teaspoon, next time around.  I like a deep almond flavor but I was worried about using too much and making the biscotti bitter. 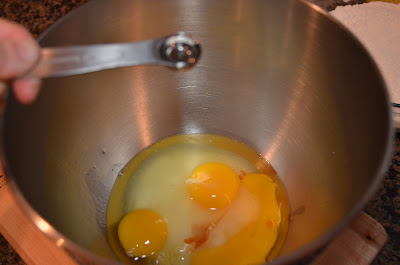 This mixture of eggs, sugar and extracts get whipped with the whisk attachment in the stand mixer for about 5-7 minutes until it thickens and holds its shape a bit.  It was a rainy and very humid day when I made this and I think that made it harder for the mixture to thicken up so I whipped mine for about 7 minutes or so. 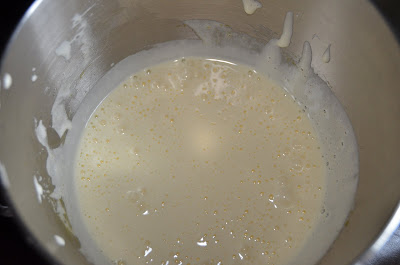 At this point, remove the bowl from the stand mixer and add in the flour mixture and stir it in by hand with a rubber spatula.  Then, drop in the chopped almonds and mix that in to combine. 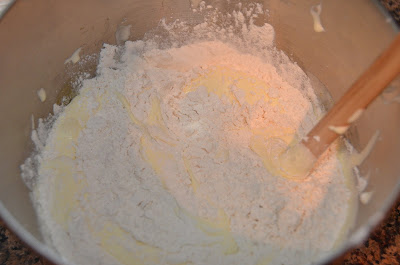 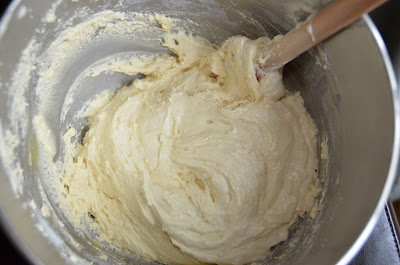 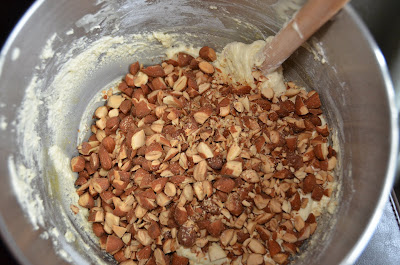 Turn the dough out onto a lightly floured countertop.  You want to divide the dough into two.  Again, I think the humid weather may have caused my dough to be very sticky.  This is when I began to worry a little bit. 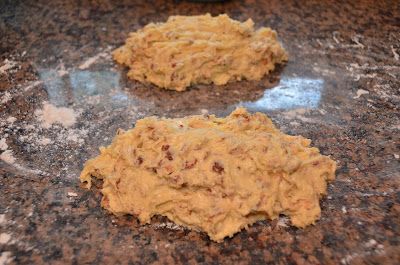 Moisten your hands with some cold water and shape each piece of dough into about 4" wide logs.  Use your wet hands to smooth the top (a wet rubber spatula should work also).  The two are a little uneven in size but I didn't want to handle the dough too much since it was pretty sticky. 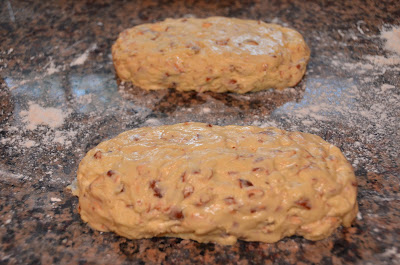 The problem at this point was picking the logs up and placing them onto a parchment lined baking sheet.  My dough was too sticky to just pick up so I slid a metal spatula under the dough and plopped them quickly onto a baking sheet.  If you have a bench scraper, that would work really well too.  I used a little more water on my hands and smoothed them back into shape again.  They made it into the 350 degree oven; I crossed my fingers that they would hold up and turn out alright. 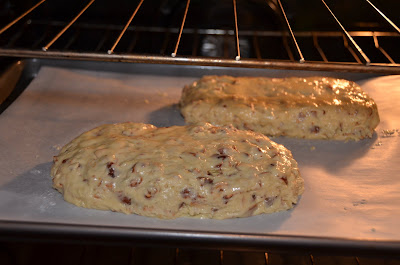 The logs bake for 20 minutes and we rotate the pan after the first 10 minutes.  Once out of the oven at this point, they are just hardened and very slightly browned around the edges.  I was excited at this point since they looked and smelled pretty good!  I feared they might spread too much in the oven but they didn't.  Turn the oven down to 300 degrees and let the logs rest for about 15 minutes. 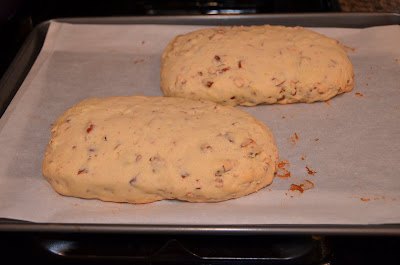 Biscotti means twice-baked cake so after the logs are cooled, we slice them and bake again until they are dry and crisp.  I sliced slightly on the diagonal, making them about 1/2 inch thick.  I was surprised at how well the biscotti held up.  It was very easy to slice.  Just make sure you use a serrated knife. 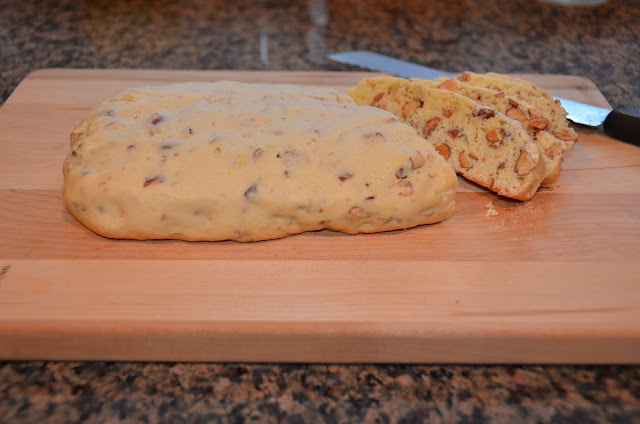 You'll end up with 2 trays like this.  Place it into the 300 degree oven and bake for about 20-25 minutes (flipping them around midway) until cookies are firm and dry.  They will continue to harden a little bit more as they cool. 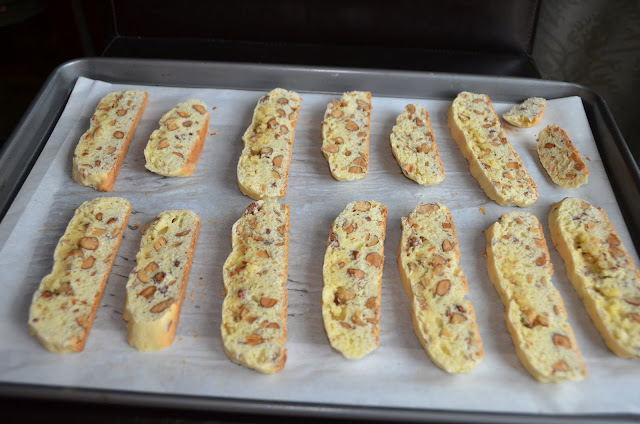 Let cool on a cooling rack and give one a try.  It tasted quite different from the packaged ones!  It had a lovely almond scent and I love the almond flavor from the extract and of course, all the almonds themselves. 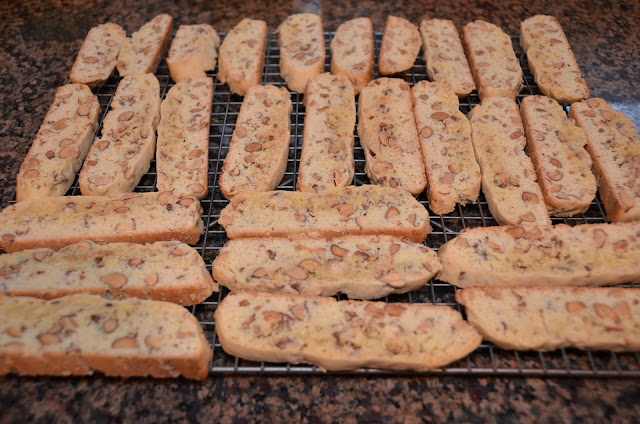 I will definitely be making biscotti again!  To change things up, I might try adding a tablespoon or so of orange zest.  There is a fantastic Italian restaurant nearby that I just love that serves little orange biscotti, along with a couple of other goodies, as an after dinner treat before actual dessert.  That biscotti is really good and I'm thinking they go further and use a little orange liqueur in the batter too.  To dress the biscotti up further, you could also melt some bittersweet chocolate with a dab of butter and dip each biscotti with chocolate.

Share some with friends and family or store leftovers in an airtight container.  It should keep for about a week. 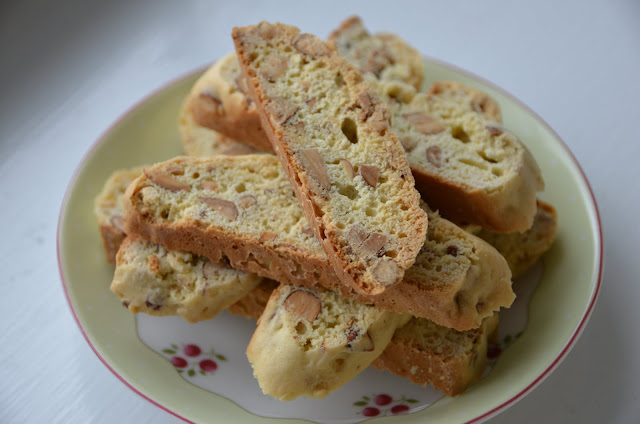 Update: I recently made biscotti again on a cool, dry day.  The egg and sugar mixture whipped up thick in under 5 minutes and the dough was a lot drier and easier to handle.  I still needed a little help lifting it up from the countertop to the baking sheet but it was far more manageable than it was when I first made this on the wet, humid day.  I also find that I like the biscotti that are cut a bit thinner so I'm going to try and keep mine consistently close to half an inch thick.

Preheat your oven to 350 degrees.  Line 2 baking sheets with parchment paper.  You'll use the first to bake the logs and will need the second one after the logs are sliced and cookies are baked a second time.

Whisk the dry ingredients (flour and baking powder) together in a bowl.

Fit the whisk attachment onto your stand mixer (not the standard paddle attachment we typically use).  Place the eggs, sugar, almond extract, and vanilla extract into the bowl of the stand mixer.  Whisk on medium speed for about 5-7 minutes until mixture is thickened.  You can certainly do this part by hand if you have the muscle power.  Remove the bowl from the stand mixer and stir in the flour mixture by hand with a rubber spatula.  Add the almonds and combine that into the dough.

Dust your countertop or work surface lightly with flour.  Use a little extra if your dough is super sticky like mine was on a very humid day.  Divide your dough roughly into 2 and turn out onto the floured surface.  Moisten your hands a bit with some cold water and shape the dough into 2 logs about 4" wide and smooth the tops.  I just eyeballed my logs and they came out about 4" wide.  You can make them a little thinner in diameter so that you end up with a higher number of smaller cookies, if you prefer.  Place the logs onto one parchment lined baking sheet.  Space them a little bit apart; the logs will spread a little while baking but not too much.  If you have trouble moving them onto the baking sheet like I did, use a metal spatula to help you with the transport and re-shape the dough logs with moistened hands once they're on the baking sheet.  You can wet a clean rubber spatula and smooth the dough out this way as well.

Bake the logs for 20 minutes, rotating the sheet pan after the first 10 minutes.  Remove from the oven and reduce the oven temperature to 300 degrees.  Let the logs cool for about 15 minutes before placing onto a cutting board to slice.

Once the logs are cool enough to handle, slice them on a slight diagonal with a serrated knife, about 1/2 inch thick.  Place cookies on a baking sheet.  You should end up with 2 full baking sheets of sliced cookies.  Bake for about 20-25 minutes or until the cookies are dry and firm.

Other suggestions and ideas:  Add a tablespoon or so of orange or lemon zest and/or experiment with extracts and liqueurs.  To dip part of your biscotti in chocolate, melt 4 ounces of bittersweet chocolate with a tablespoon of butter.  Dip each biscotti about half-way and lay them on a piece of parchment or wax paper for a few hours so the chocolate can completely cool and harden.