The topic is brownies today!  I've had this urge to taste test two particular brownie recipes side-by-side to see which my family and I really like best.  Like all of my whims that keep bugging me until I do it, I finally went ahead with my crazy little taste test recently.  My family and I have a thing for doing little informal taste tests - okay, it's more like I have a thing for it and they go along with me, but we do have fun with it.
Now...for a chocoholic like me, brownies are an indulgence that rarely lets me down.  So I've made - and enjoyed - more than a few brownie recipes.  They're always enjoyable and I can't say I've been particularly loyal to any specific recipe...until I made Alice Medrich's cocoa brownies last year.  Since then, those have become something like our "house" brownies, if you will.  The boys (my husband and the little guy) love them.  And truly, those brownies made from cocoa powder makes for incredibly deep chocolate-flavor, with a great dense, moist, and slightly chewy texture.  Topped with a little vanilla ice cream (because I like ice cream with everything), it is heaven! 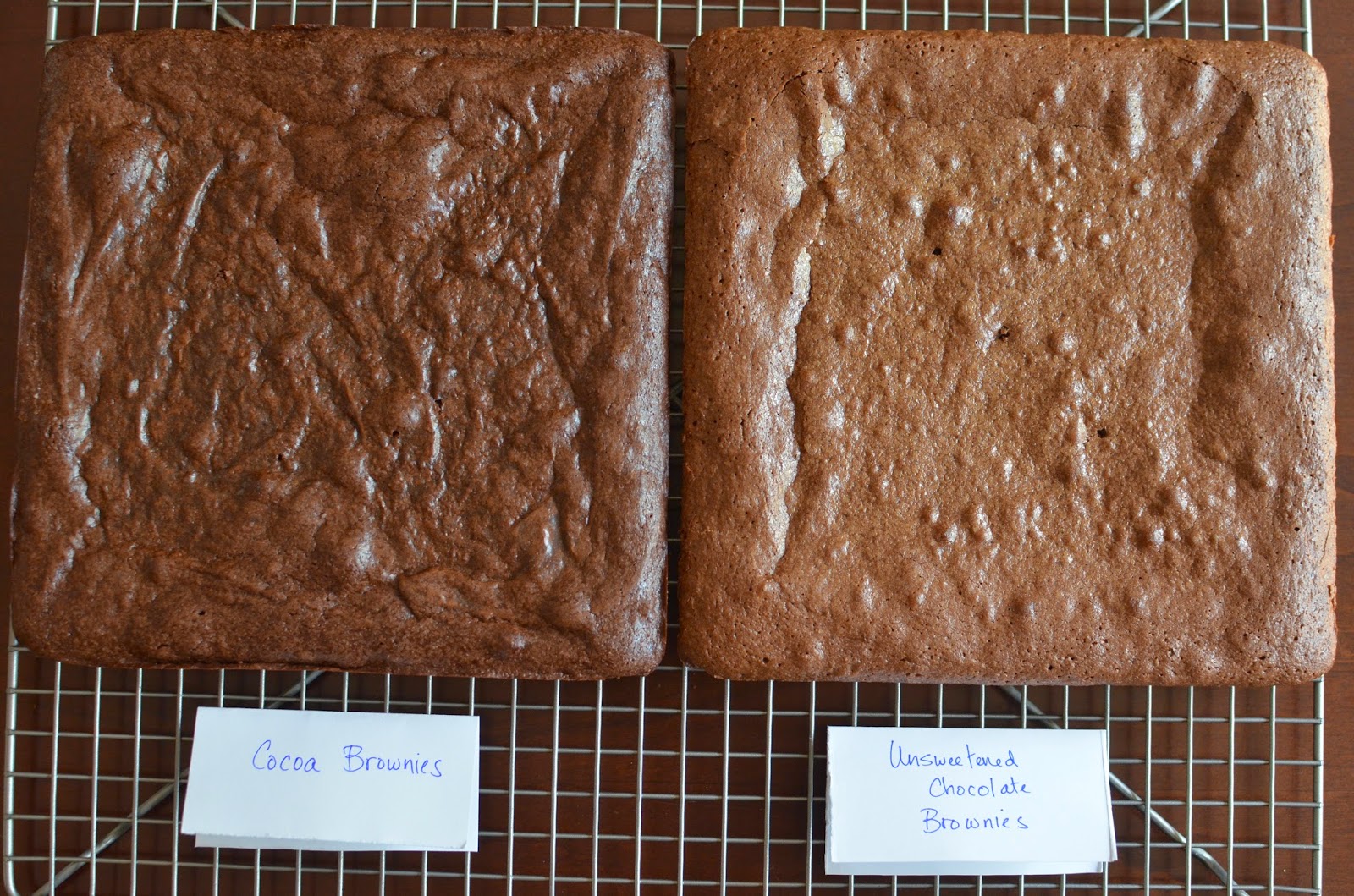 That said, every time I make those cocoa brownies, I remind the boys about the other great brownie recipe.  I tell them: "you know, the ones made with unsweetened chocolate...the one I used for the ice cream cake?"  They were not so convinced that the brownies made from a starting base of unsweetened chocolate was better than their favorite cocoa-based ones but for whatever reason, I kept remembering that I personally adored those.  So why not settle this with a fun little taste test?

I may have gotten a little carried away with my experiment once I got started but obviously, this was totally informal and all in good fun!

So in one corner, we have those cocoa brownies (here for: my original post).  Made on a foundation of unsweetened cocoa powder, you literally add back and control the fat and sugar put back in.  You end up with incredible depth of chocolate flavor - surprisingly so, I think.
And in terms of texture, you have a dense, fudgy brownie with soft centers and a thin crackly, shiny crust.  It has a beautifully dark color.  Interestingly, I make these using natural cocoa powder.  I typically go with Dutch-process most of the time for baking but stock my pantry with natural cocoa powder just for this recipe.  I first made the recipe using Dutch-process (call it another taste test!) but after we tried it with natural, we were really surprised to find that natural cocoa powder made for an even more chocolaty brownie!
This contender never fails to elicit "mmmm's..." out of the fellas in my house and I love it myself.  I bake some and stock a few in the freezer and it is always a welcomed treat.  In other words, this was the brownie to beat!

Now when I think of chocolate desserts with a serious, deep chocolate flavor, I personally don't think of cocoa powder but of unsweetened chocolate.  Ironically, while I've made this brownie recipe a couple of times, I've never made them the traditional way in a square pan until this taste test.  I've baked it in the round as a cake and used it last year as the base for my son's birthday ice cream cake.
These brownies have serious street cred.  They are Deb's (Smitten Kitchen) favorite brownies.  I don't take that lightly and having eaten them a couple of times, I remember how much I liked them.  I remembered the very centers having a unique chocolate flavor that was hard to describe so if I was to pit one brownie recipe against the boys' favorite cocoa ones, these were it!

Both of these brownies are very easy to make.  I made them both in the same 8-inch square pan, essentially one after the other.  I tried to take them both out around the same parameter of done-ness, meaning they were set but a tad under-cooked to ensure fudginess.  No one wants dry brownies.

When I think about it, I suppose it makes sense that I personally like both of these brownies and thought of one with the other.  Both of them take you to a purer form of chocolate as a starting point.  With unsweetened cocoa, you literally control and add back the fat (butter) and sugar yourself.  There is cocoa butter in unsweetened chocolate but it definitely still gives you a deeper chocolate essence and more control than using semi or bittersweet. 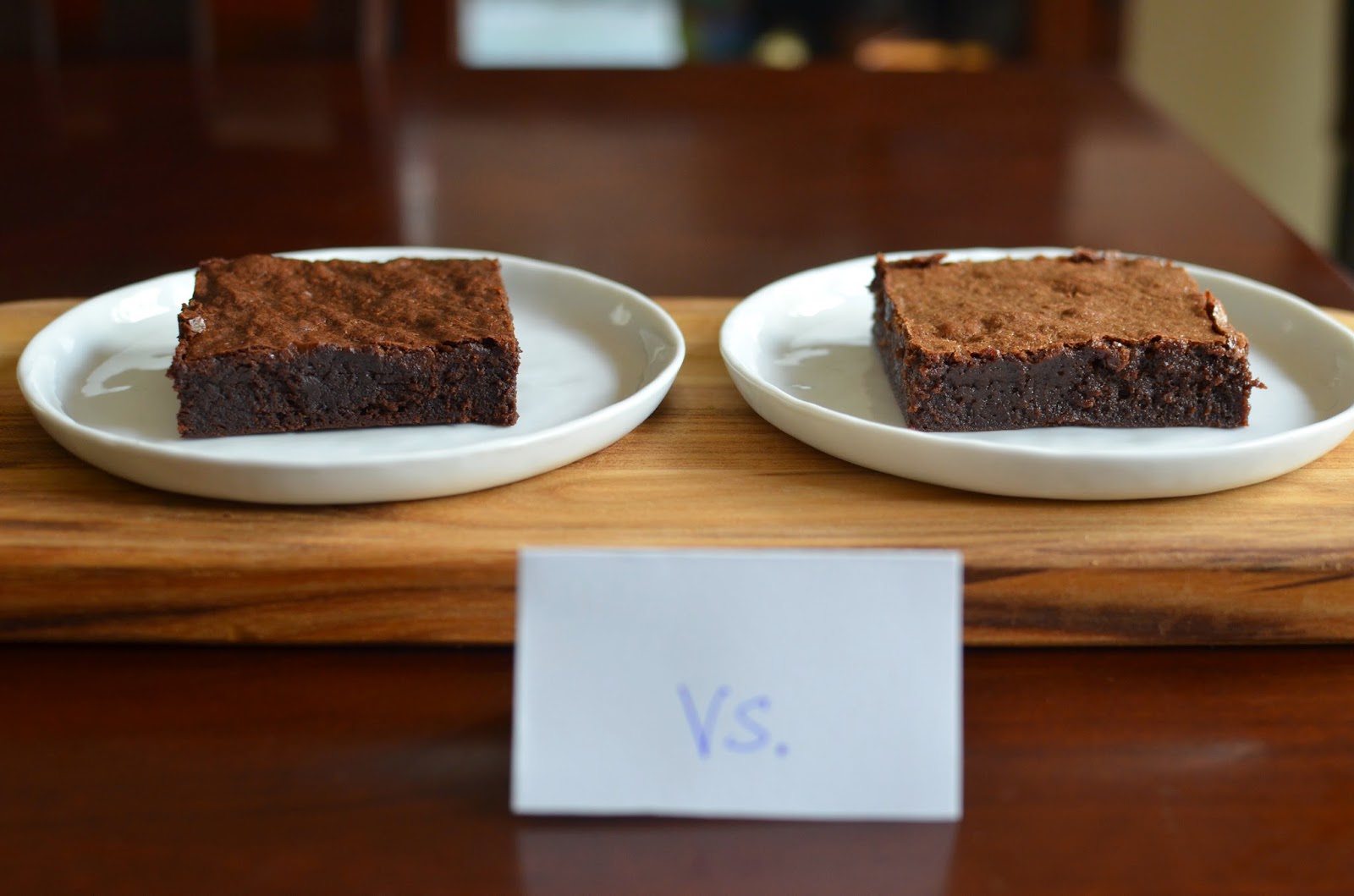 To sum it up, we tasted the two brownies!  The small informal group of taste-testers included two 8 year old boys (my son and a friend of his who was here for a playdate), my husband, and myself.  This is hardly scientific, folks.

So what do you think?  Have you had these brownies, or do you have a particular favorite or a "house brownie" recipe of your own?  For us, there was a clear, decisive winner in this little taste test and it was...

In our house, this brownie issue has now been thoroughly settled.  The cocoa brownies were the clear favorite, the winner of our informal taste test.
The kids - they resoundingly favored the cocoa brownies.  In case they were being swayed by the color of the brownies during the first taste test (since I let them see what they were eating the first time around), we even tried it again in a truly "blind" taste-test and still, the cocoa ones were the clear winner for them.

The adults - that would be my husband and I.  We did a blind test (particularly since the baker, which would be me, clearly knew which was which).  But even without looking, I have to tell you that the two are different enough to be clearly distinct so it's easy to have a preference.  The cocoa one just has a deeper chocolate flavor.  It's got a heavier, denser, what I would call a 'more-satisfying' mouth feel, to them.  They're also a bit chewier than the ones made with unsweetened chocolate, which we obviously like.

I think the unsweetened chocolate brownies are great but in comparison, we clearly prefer the cocoa ones.
Well, call me crazy but now that this little internal debate has been resolved, I can sleep easier at night!  : )


Recipes:
Both recipes follow, so you can decide for yourself!

Stir in the vanilla with a wooden spoon. Add the eggs one at a time, stirring vigorously after each one. When the batter looks thick, shiny, and well blended, add the flour and stir until you cannot see it any longer, then beat vigorously for 40-50 strokes with the wooden spoon or a rubber spatula.  Spread the batter evenly in the lined pan.

Remove the brownie from the pan using the parchment or foil overhang.  Transfer to a cutting board and cut into desired-size pieces.  I find that aside from chilling the brownie first, a hot but dry knife cleaned in between slices works well.

Grease an 8-inch square baking pan and line the bottom with a piece of parchment paper or foil, leaving an overhang on two opposite sides.  Preheat oven to 350 degrees.

In a heatproof bowl set over a pan of just simmering water, melt the chocolate and butter together.  Remove the bowl from the pan and whisk in the sugar.  Whisk in the eggs, one at a time, then the vanilla and salt.  Stir in the flour using a rubber spatula.

Scrape batter into the prepared pan, spread evenly and smoothing the top.  Bake for approximately 25-30 minutes, or until a toothpick inserted into the center comes out mostly clean.  Avoid over-baking; a bit of moist crumbs is fine.

Remove the pan from the oven and let cool on a wire rack.  Remove the brownie using the parchment or foil overhang and slice into desired-size pieces.  I find that aside from chilling the brownie first, a hot but dry knife cleaned in between slices works well.