Let's start the week off with cake, shall we?  At least we'll kick it off by looking at cake.  That's really all I did because I made this vanilla layer cake with chocolate buttercream for my son's school fair this weekend. 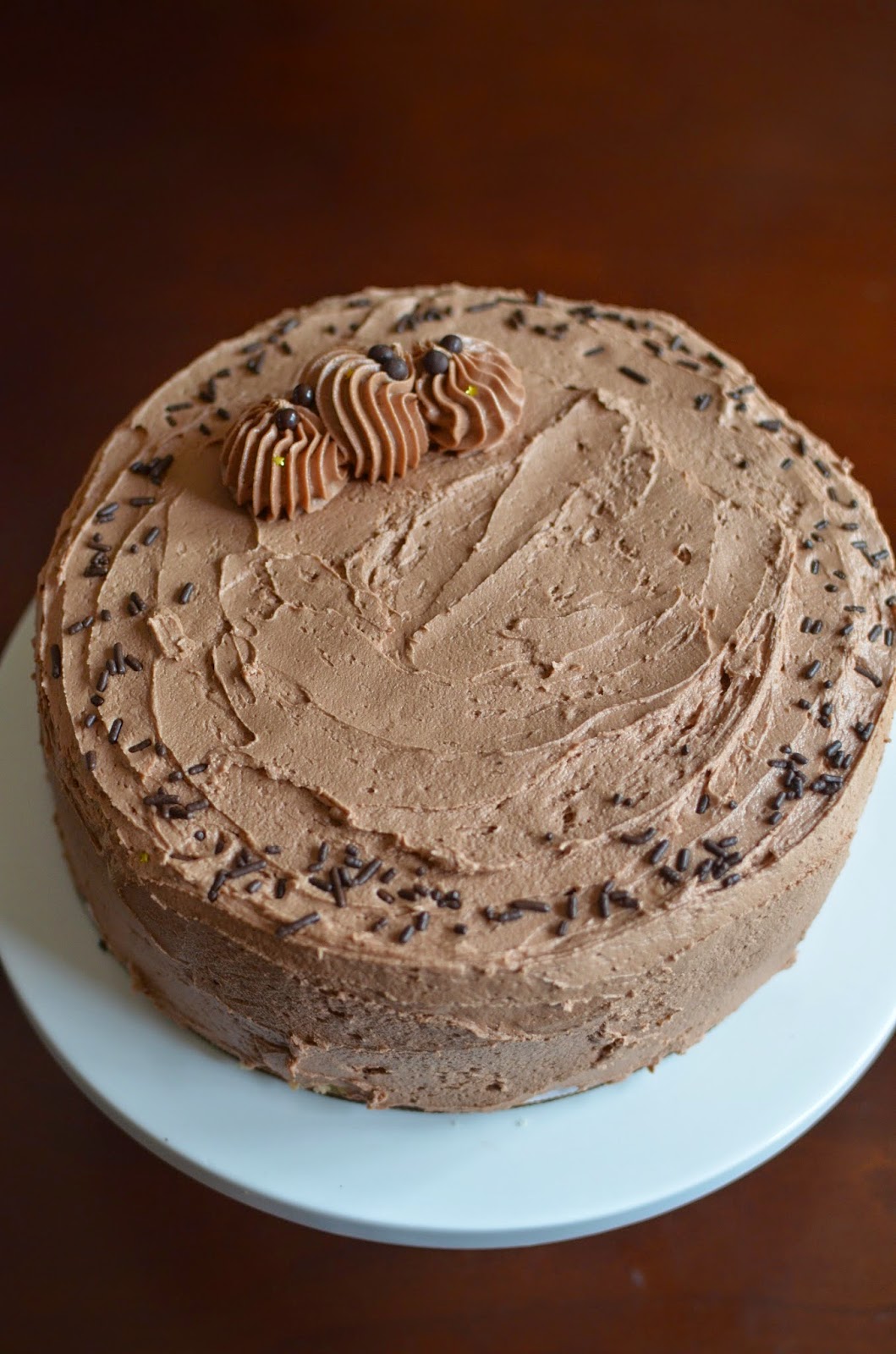 The cake is a double recipe of the Hummingbird Bakery's vanilla cupcakes.  Last time I made them, I was impressed by their flavor as well as moist and fluffy texture using a relatively small amount of butter (3 tablespoons for a dozen cupcakes).  It's an easy, tasty vanilla cake recipe that I was happy to whip up again.

I thought I'd pair the vanilla cake with an easy chocolate buttercream.  You can't go wrong covering all the bases with both chocolate and vanilla, right? 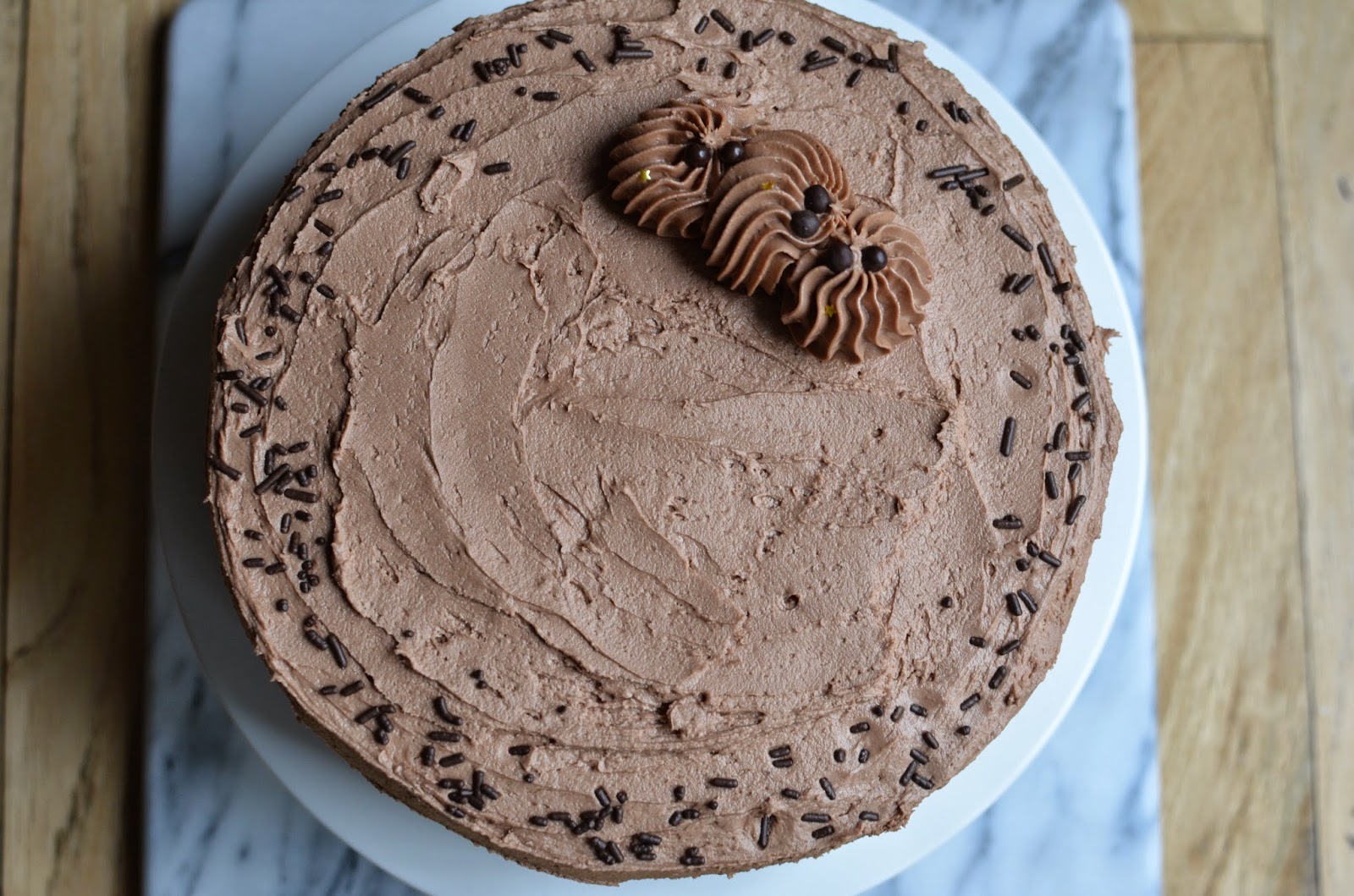 Once again, making this cake reminded me that frosting/decorating layer cakes is not my thing.  I had some vague notion to pipe something on top of the cake but it just didn't work out.  I think it took me longer to figure out (more like "fix") the decoration (if you can call it that!) than to make and bake the cake layers.  In any case, I believe this is the time when we bring out words like "rustic" and "homemade" to describe the effort.  Regardless of how a cake ends up looking, there's still always something special and rewarding about creating a homemade one from scratch. 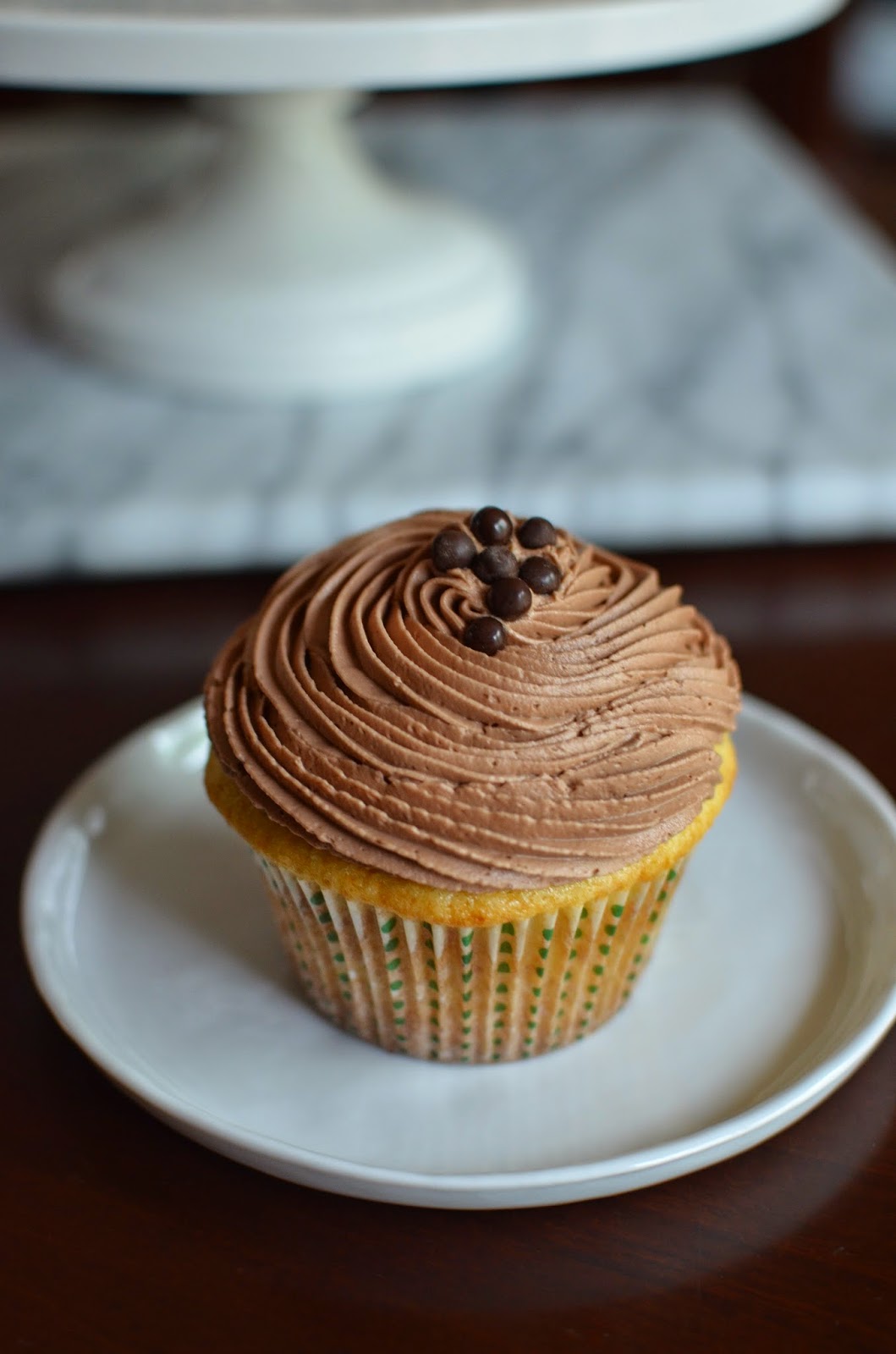 I had to sneak off a bit of the batter and make an extra cupcake (okay, two cupcakes) for my fellas.  That way, we get to taste test and make sure everything is alright. 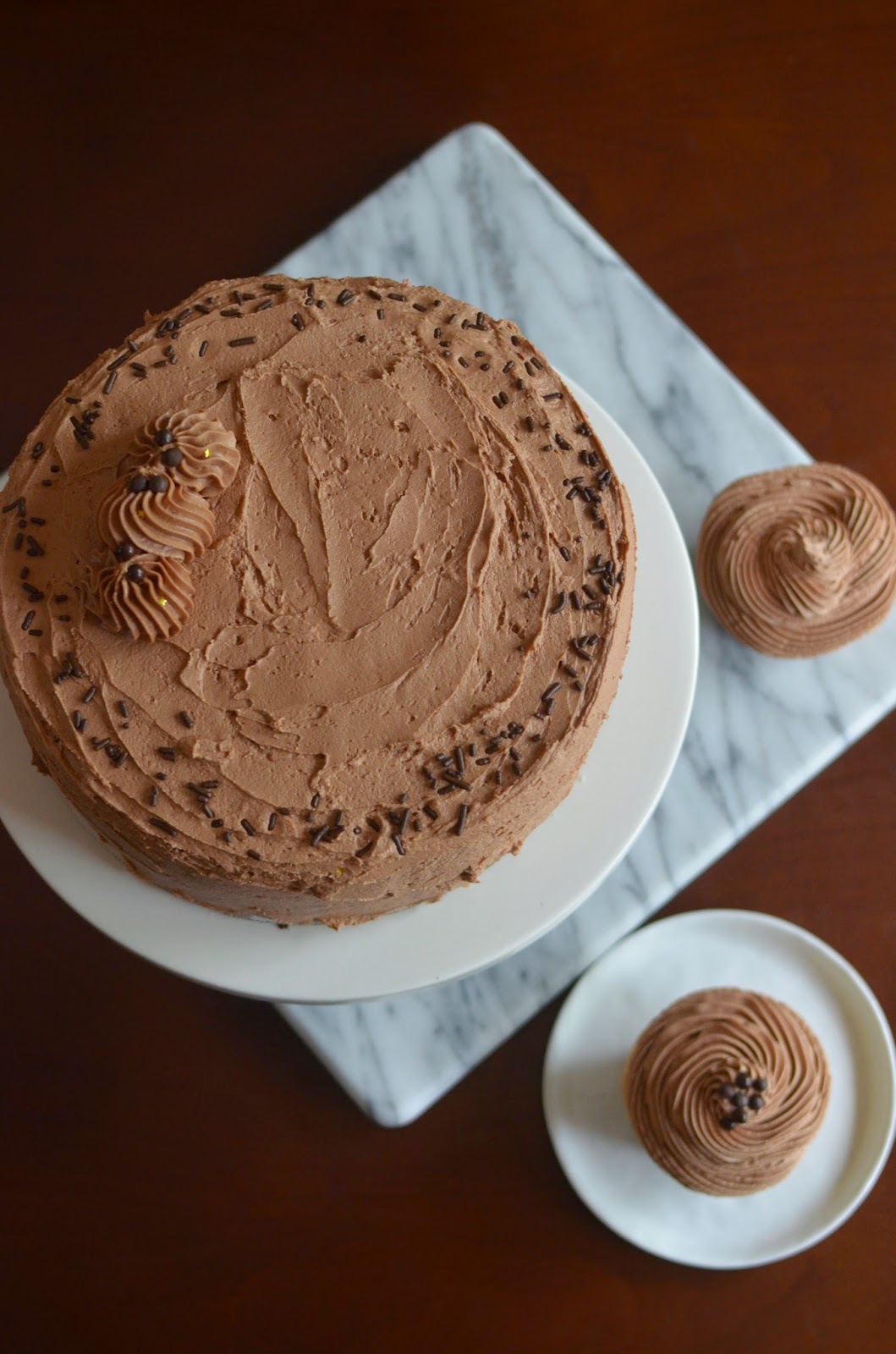 Have a great week ahead!

If you're looking for a simple vanilla cake recipe that turns out a flavorful, moist, tender, light and fluffy cake, this is a good one.  I doubled the Hummingbird Bakery's vanilla cupcakes recipe and baked two 8-inch round layers (with 2 cupcakes as baker's bonus).  The last time when I made just cupcakes, I added vanilla beans.  I didn't do that this time but I recommend it if you have it on hand and want to give your cake that lovely vanilla-specked look and a little extra flavor. 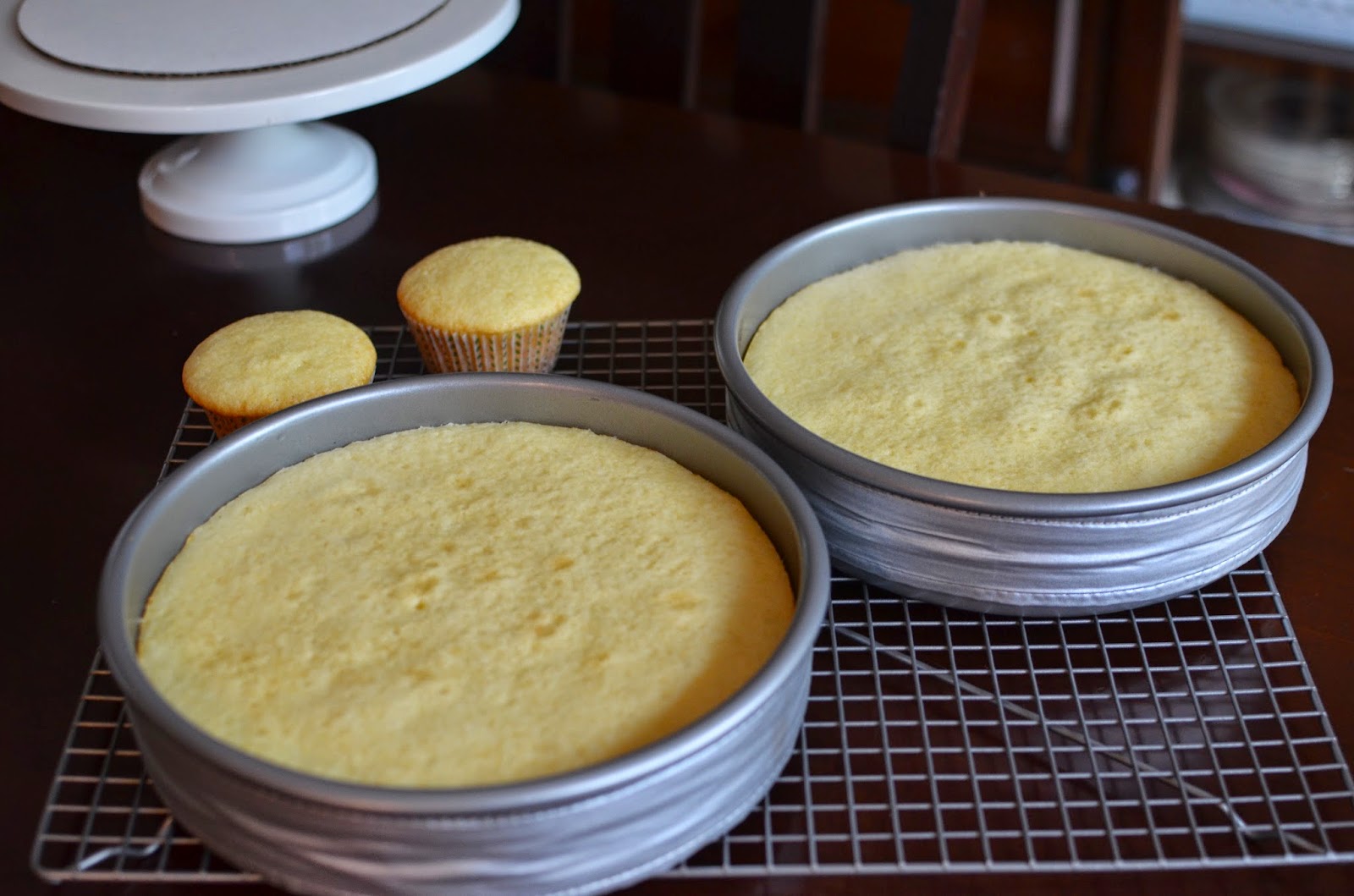 I actually remembered to use my baking strips!  I bought them a while back and only used them once or twice since I've taken to making smaller 6-inch cakes lately.  I think the baking strips do help cakes bake up with a more even, flat-surface - very helpful when you're making a layer cake.  And the cakes turned out moist all around, including the edges and sides.  I'd compare the texture of this cake to ones made with oil instead of butter (which is what's used here). 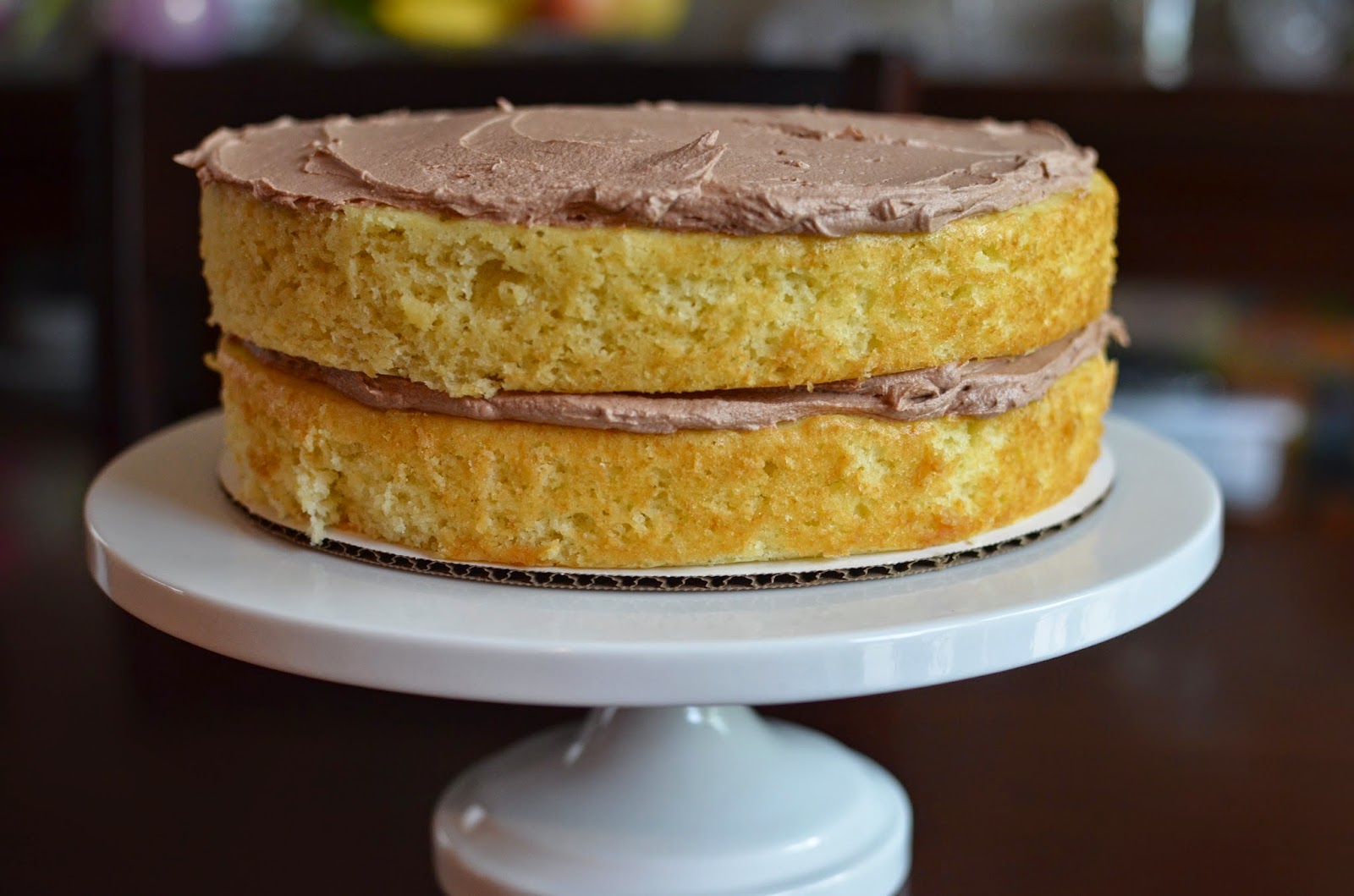 I had planned to pair this cake with Ina's chocolate buttercream frosting, which is very chocolaty and smooth compared to other standard American confectioners' sugar-based buttercreams.  Not being a fan of buttercream (yes, it's true), it's pretty much the only buttercream I really like.  But then I remembered a problem...that buttercream calls for an egg yolk and I thought I'd go with something else since I was packing this up for my son's school fair.

This chocolate buttercream I ended up using is pretty standard fair but you start off by whipping the butter itself thoroughly in order to give the finished buttercream a really fluffy texture.  It ends up looking a lot like a chocolate/cocoa whipped cream frosting. 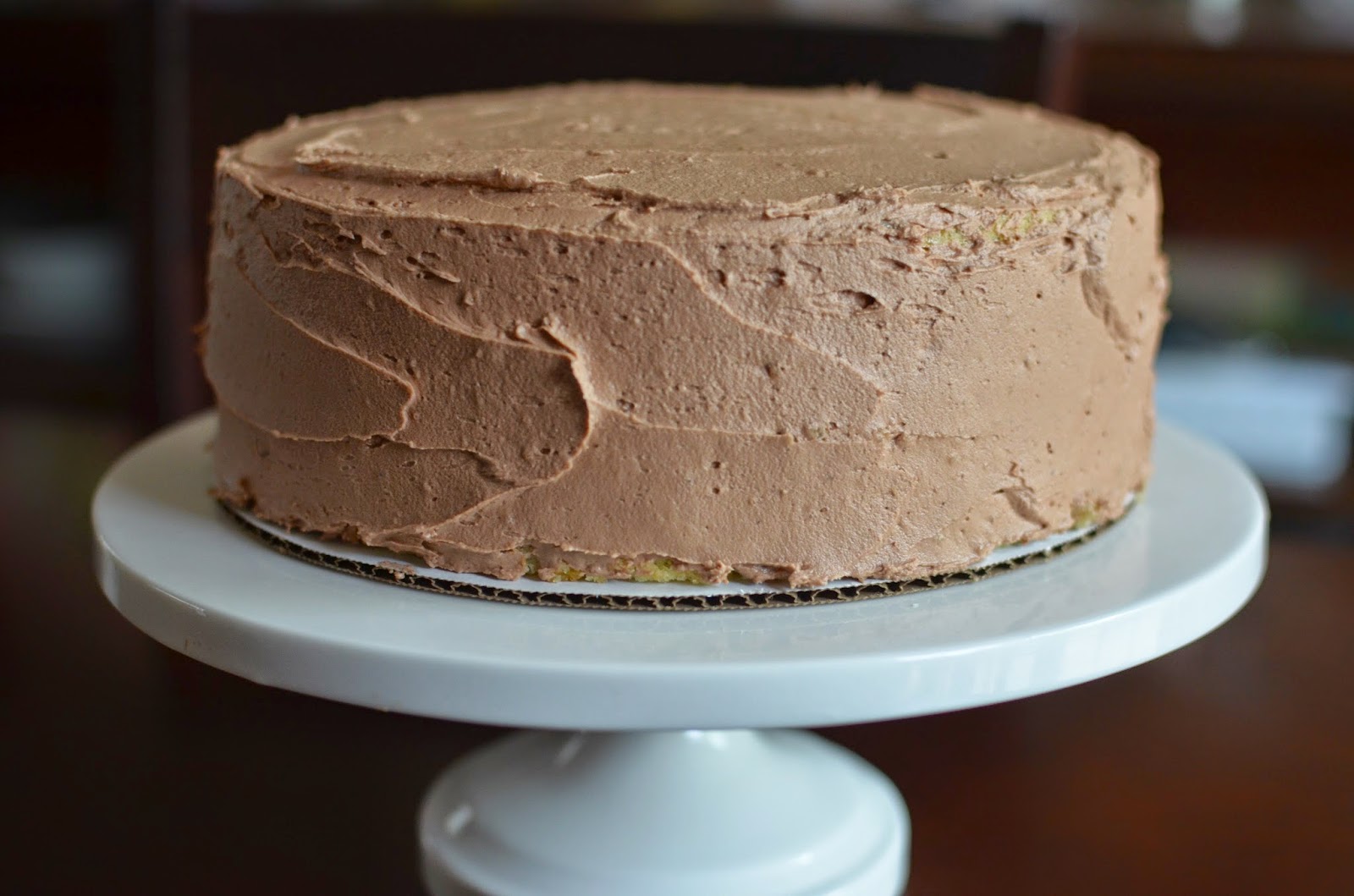 It's so nice when a cake comes together! 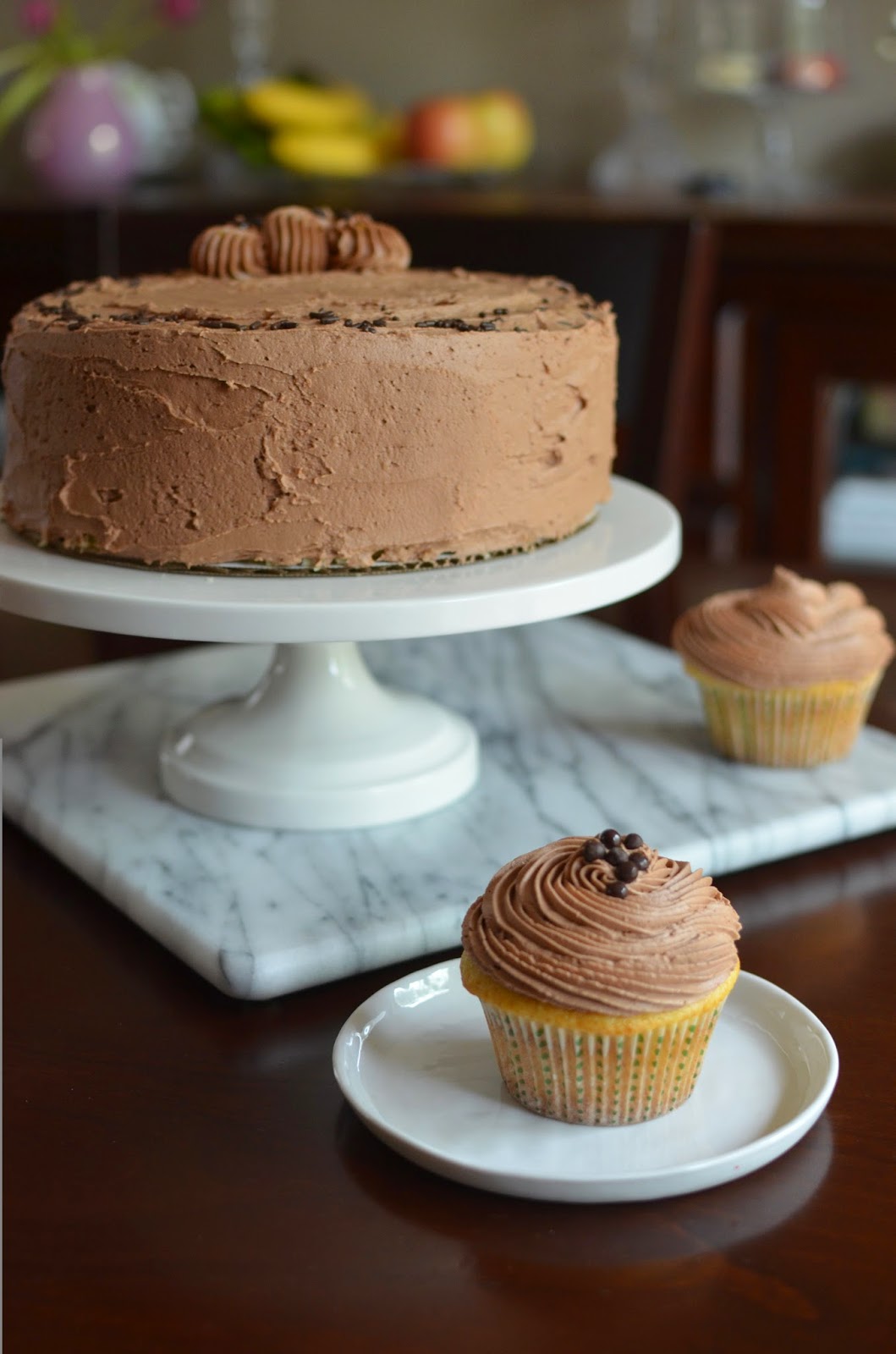 And I managed to box it up and deliver it safely without dropping it or any other mishap on a rainy afternoon. 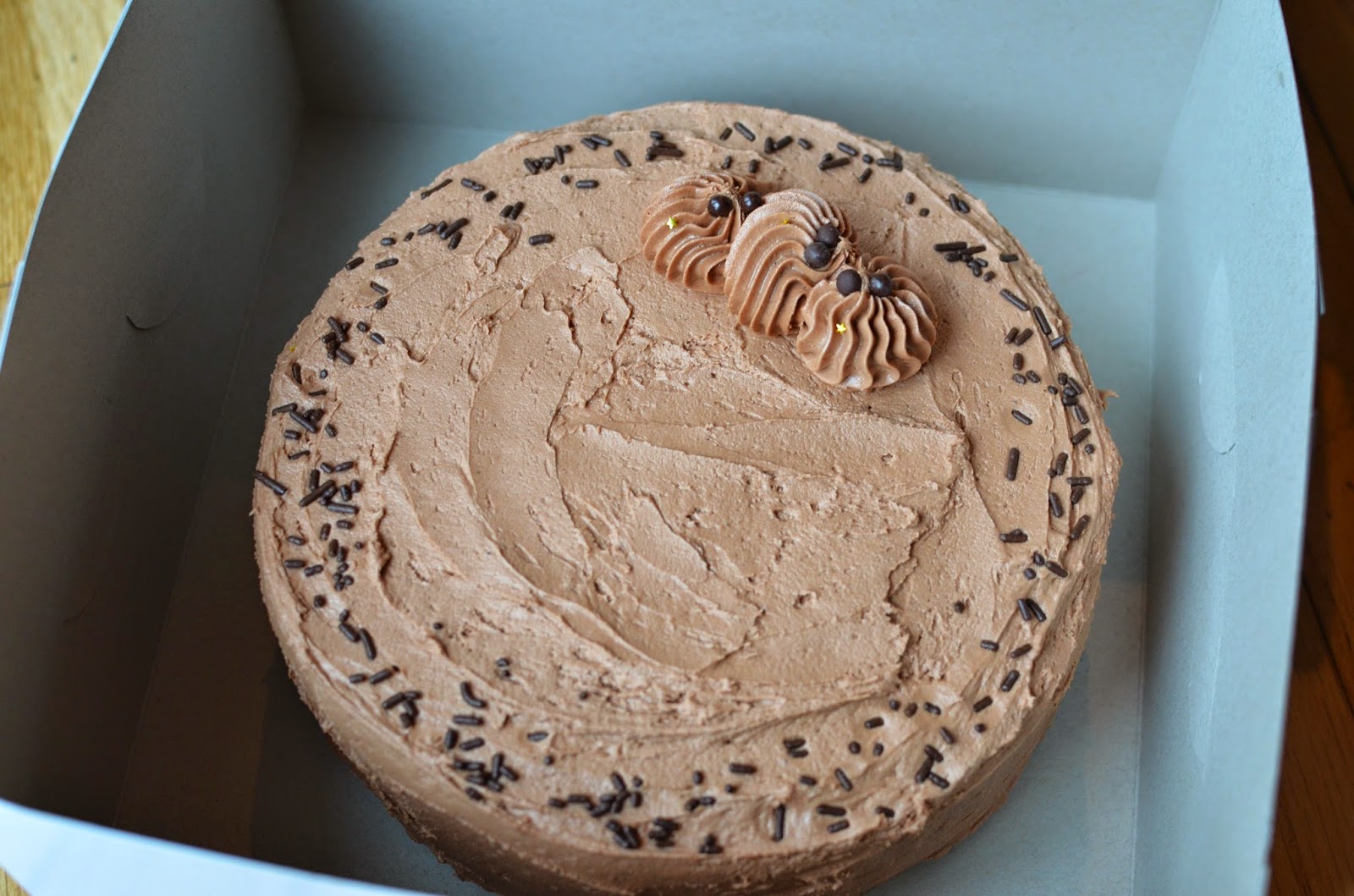 For the cake layers:

Preheat oven to 325 degrees.  Spray two 8-inch round cake pans with baking spray, line the bottoms with a piece of parchment round and lightly grease the paper.

Put flour, sugar, baking powder, salt, and butter into the bowl of a stand mixer fitted with the paddle attachment.  Beat on low speed until combined.  The butter should be incorporated into the dry ingredients though the mixture will look somewhat sandy.  Gradually add half the milk and beat until just combined.

In a measuring cup, whisk the eggs, remaining milk and vanilla extract together.  Pour this into the flour mixture and continue to beat until mixture is smooth and just combined.

Divide the batter between the cake pans, smoothing out the tops.  Bake until a cake tester inserted into the center of the cake comes out clean, approximately 25 minutes.  Remove cakes from the oven, set on a wire rack, and let cool for about 30 minutes in the pan before turning them out onto the wire rack to cool completely.

Make buttercream frosting:
Place chocolate and instant espresso powder (if using) into a heatproof bowl and melt carefully in the microwave or set over a pot of barely simmering water.  Set aside and let cool.

Attach the whisk attachment to a stand mixer.  Place butter into the bowl of the stand mixer and whip the butter for 5 minutes on medium-high speed, stopping to scrape the bowl a couple of times.

On low-speed, gradually add the confectioners' sugar.  Once incorporated, add vanilla and whip on medium-high speed until incorporated.  Add chocolate and continue to whip, scraping the bowl as needed, until frosting is light and fluffy, another minute or two.

Assemble:
Set one cooled cake layer onto a serving plate and tuck pieces of wax or parchment paper under the cake for easy clean up.  Place a couple of large dollops of buttercream on top and spread with an offset spatula to coat.  Place second cake layer on top and frost the top and sides with the remaining buttercream.  Decorate as desired.