Possibly because of Sandy, this feels like one of the longest winters in recent memory.  But we've made it to March and even though it's still cold and technically winter, I feel like Spring is finally coming!  I'm so ready to pack away my scarfs and break out the sandals.  I don't know how I was ever the girl who loved the cold and loathed zipping up her jacket.  Getting older teaches you that some things - even about yourself, or maybe particularly about yourself - do change. 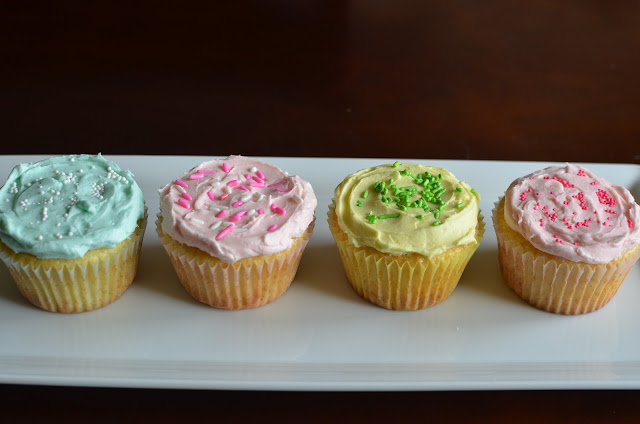 I was in the mood for some color.  Seriously, I've taken to painting my nails a bright red lately just to brighten things up.  So even though you might very easily mistake my fingertips for those of a little girl's (i.e., short and stubby), it makes me smile when I look down and see that splash of crimson against all the gray everywhere. 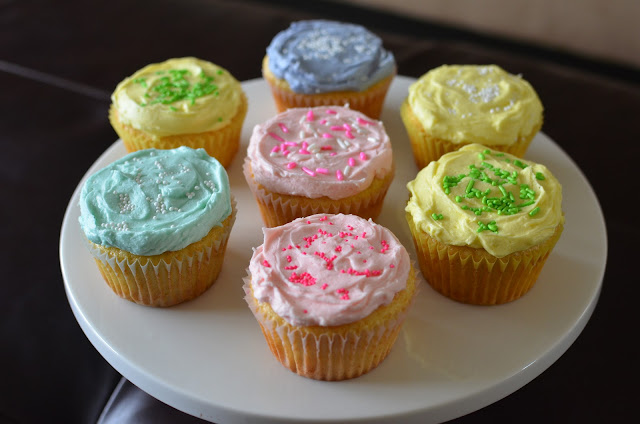 I thought I'd inject a touch of color into dessert as well, with these cupcakes.  You might know that I far prefer chocolate over anything else despite its lackluster color.  However, (red nail polish aside) I have a soft spot for pastel hues - those Easter colors that conjure up images of Spring and egg hunts.  I just love seeing all those chocolate Easter eggs wrapped up in shiny pastel foil at the stores right now. 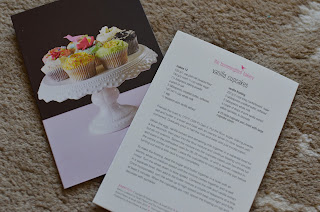 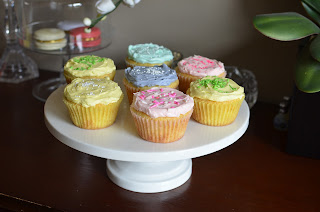 The recipe for these vanilla cupcakes with buttercream frosting comes from Hummingbird Bakery.  Funny enough, I actually pulled the recipe off the back of a set of note cards I bought recently.  But I actually first saw them on Joy the Baker (very slight difference vs. the recipe on the card) a very long time ago and remember them because of how much I liked the colors.

There was also another great thing about these cupcakes that I never forgot: it only takes one stick of butter for almost-a-dozen cupcakes and frosting combined!  I say *almost* a dozen because I found the recipe made enough batter for 11 full cupcakes; you could stretch it to an even dozen if you don't mind them a bit less generous.  Either way, I think the one-stick of butter proposition here is a very attractive one.  I am all for lighter options wherever possible and I thought these were excellent vanilla cupcakes that I'd like to eat again or bake as a whole cake.  (I have to admit I prefer to make whole cakes as opposed to cupcakes, which take forever for me to frost!) 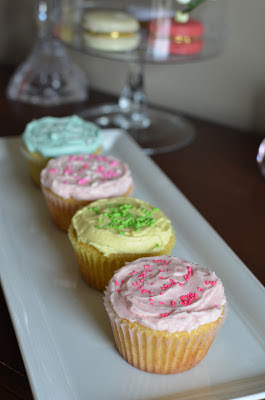 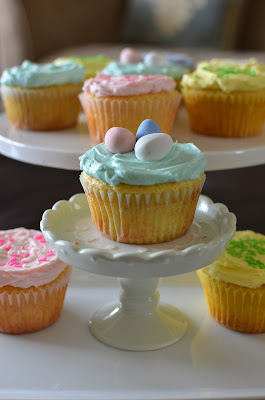 I did make a little addition to these cupcakes by adding the seeds of half a vanilla bean into the batter.  As unlikely as it sounds, I actually have more vanilla beans on hand than I know what to do with.  I bought a bunch (on sale) last summer when I first started making vanilla ice cream.  I figured a little added vanilla punch would do no harm here.

I liked the little specks of vanilla bean seeds within these fluffy and moist cupcakes.  The cake is not very sweet - it just tastes like a fragrant vanilla bean cupcake where the flavors of egg, milk, and vanilla shine through.  I'm all about the cake and no expert on buttercream (nor a fan of it, frankly) unless there's chocolate involved so I can't say much about the basic confectioners' sugar-based frosting beyond that the kids happily lapped it up in typical form. 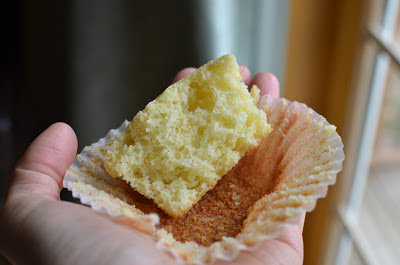 These cupcakes are my welcome to Spring.  They also helped us celebrate my niece's 6th birthday over the weekend (the pink ones were for her)!  She is actually not a fan of sweets and desserts for the most part, more partial to fruit and crunchy-salty combinations, but she is a great helper in the kitchen!  And I am thrilled to say she actually polished off an entire cupcake after dinner (very unlike her and even after a substantial buffet meal) and wanted to take a couple home with her!  She told me she really liked the cake part, though I noticed none of the frosting remained either.  Would I tell you if she didn't like it?  Yes, I would.  And I definitely can't credit my baking because I've yet to turn her into a chocolate cake fan so I think kudos goes to the Hummingbird bakery recipe. 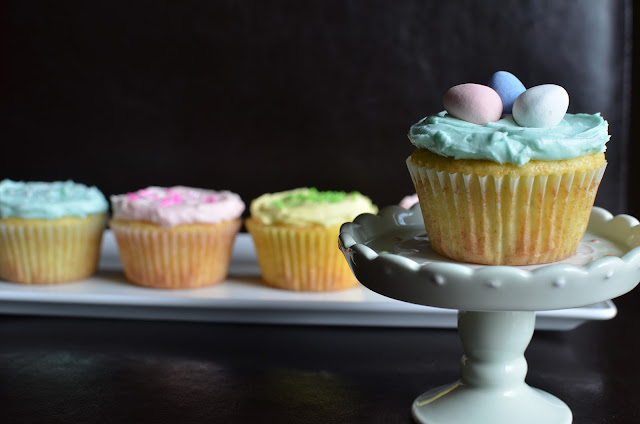 And let's not forget Easter coming up.  My little guy really looks forward to the Easter Bunny's annual visit.  When I think Easter, I think of my favorite little treat, the Cadbury mini eggs because, well, everything has to do with food!  I've always wanted to pile these eggs on top of a chocolate cake a la Nigella or use them to decorate some colorful cupcakes so I can now check one of those things off my list.

A few interesting things about this recipe:


Had I not recently read/looked through Rose Levy Beranbaum's Heavenly Cakes book, I would've been a little baffled by the mixing process for these cupcakes.  In the book, she has a method of mixing some of her cake batter that goes against what we're used to.  Typically, you would begin by creaming butter with sugar, then add liquids and the dry ingredients.  In contrast, her process starts with incorporating the flour with the butter as the first step!  She explained the reasons for this but my key takeaway was her assurance that this process makes it so you don't have to worry about over-mixing after the dry ingredients are added. 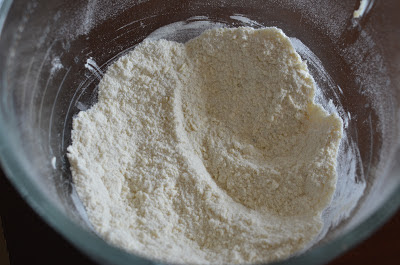 The recipe advises not to overmix so I stopped once the ingredients are incorporated.  I noticed there are still little bits of lumps in the batter but I think that's natural and to be expected. 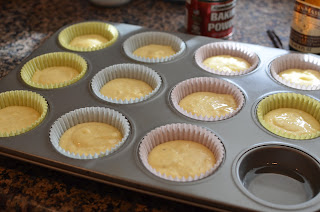 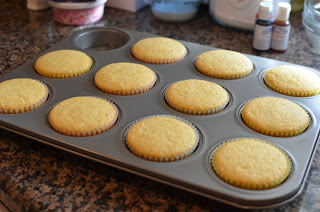 As I mentioned, I made 11 cupcakes as opposed to stretching it out to an even dozen.  Fill the cupcake liners 2/3 of the way up.  There is a good 1 1/2 teaspoons of baking powder working to lift these cupcakes up in the oven.  As you can see from my photos above, the finished cupcakes rose just slightly above the liners.  I like them that way but you could certainly make 12 slightly skimpier cupcakes.

The cupcakes came out moist, fluffy and full of vanilla flavor.  My family and I really enjoyed them.  They only lasted two days but I noticed that the two cupcakes remaining in my cupcake carrier on the second day remained very pleasantly moist.  Store them in an airtight container at room temperature.

I would definitely like to use this recipe and make a cake version one day.  Of course, I'm already envisioning a chocolate frosting! 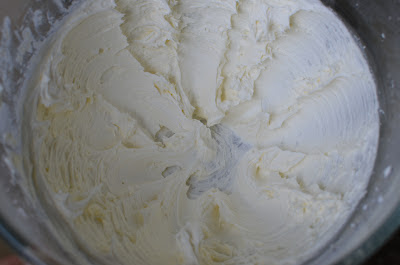 As for this vanilla buttercream frosting, it is a fairly basic one.  This is where the remaining 5 tablespoons from your stick of butter goes.  You need to give it a long thorough "beating" in your mixer.  You start with beating 2 cups of confectioners' sugar together with the butter before adding a little bit of milk and vanilla extract slowly.  Then, let it whip for at least 5 minutes until the frosting is light and fluffy.

I used gel paste food coloring to tint the icing into pastel colors.  Start with just a touch of the food coloring (particularly since we're working with such a small quantity here) and it's a good trick to set aside some of the plain icing in case you over do it and want to lighten the color. 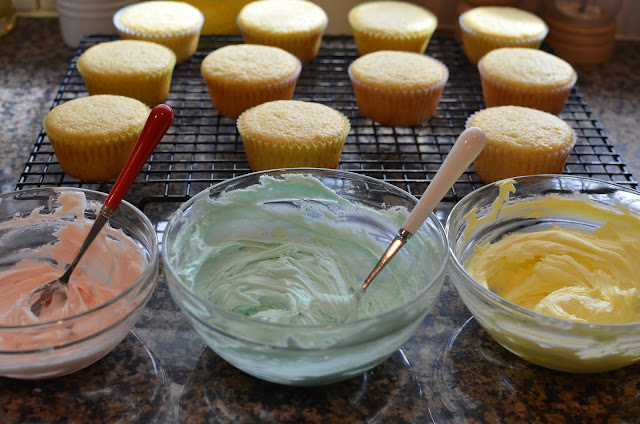 I would mention that the buttercream frosting does harden slightly on the outside as it sits.  Many simple buttercreams do this where a dry outer crust forms (though it remains soft), particularly when there's a relatively small amount of fat to sugar in the recipe.  Because of this, add your sprinkles and other toppings on top of the frosting right away so they'll adhere and you'll make a quicker job of it.  Learned that the hard way, myself!  One of the reasons cupcakes take me ages to decorate is because I keep forgetting things like that. 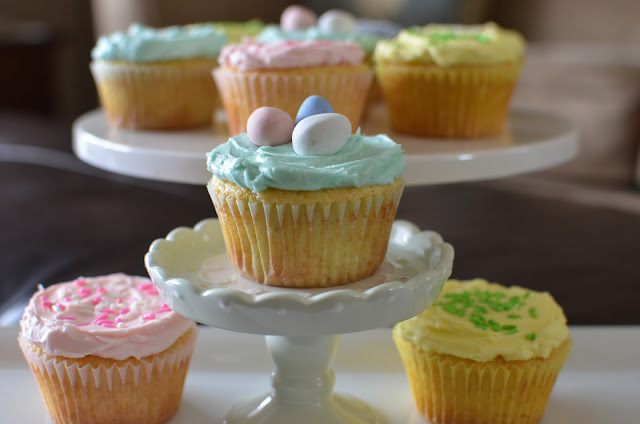 It was fun to change things up a bit.  I love the colors of these cupcakes.  They make me smile and I can take a look at them anytime I want now that they're captured on this little blog.  Plus, I discovered a great vanilla cake recipe as an added bonus.  Now, I call that a success!

Put flour, sugar, vanilla bean seeds (if using), baking powder, salt, and butter into the bowl of a standmixer fitted with the paddle attachment.  Beat on low speed until combined.  The butter should be incorporated into the dry ingredients though the mixture will look somewhat sandy.  Gradually add half the milk and beat until just combined.

In a small measuring cup, whisk the egg, remaining milk and vanilla extract together.  Pour this into the flour mixture and continue to beat until mixture is smooth.  The batter may have small lumps in it but do not overmix.

Fill the cupcake liners about two-thirds of the way full.  You can divide the batter into 11 cupcakes (for fuller ones, like I prefer) or 12 if you don't mind them being slightly squatter.

Bake for approximately 20 minutes, or until a cake tester inserted into the center comes out clean.  They will be puffed, slightly rounded on top and springy to the touch.  Remove from the oven and let cupcakes cool a couple of minutes in the pan before turning them out onto a wire rack to cool completely.

To make frosting:
Beat sugar and butter together in the bowl of a standmixer fitted with the paddle attachment on medium speed until well combined.  Mix the milk and vanilla extract together in a small bowl.  On low speed, add the milk mixture a couple of teaspoons at a time.  Once incorporated, turn the speed up to high and beat until light and fluffy, at least 5 minutes.  If desired, divide the frosting into separate bowls and tint with food coloring.

Frost thoroughly cooled cupcakes and top immediately with sprinkles or other decorations, if you like.