I think I've made my love of several things pretty clear on this blog.  First, there's chocolate.  That deserved its own sentence but I've also talked about how much I love things like English muffins, eggs, steel-cut oatmeal, chestnuts, and desserts incorporating hazelnuts, to name a few others.  Today, I want to add something else to the list: sweet potatoes!  To be exact, I absolutely love Japanese sweet potatoes, or "Satsumaimo".

I recently stumbled upon a simple recipe for Japanese sweet potato "wagashi" and made some for an afternoon snack.  Frankly, I'm using it as an excuse to talk about one of my favorite foods. Japanese  "wagashi"  refers to small confections served with tea.  Not being Japanese, I'm no expert but I've often admired the dazzling array of wagashi on display at Japanese markets.  They are generally colorful and intricately designed.  Think of this Japanese sweet potato wagashi as a far more simple, homespun kind that you can whip up as a sweet little bite to go with your afternoon tea.  They're basically mashed sweet potato balls, so you can just call it that if you like.
Back to the Japanese sweet potatoes...have you tried them?  Maybe there are other fans out there. Unlike the more typical orange-flesh sweet potatoes at the market (which I also enjoy and cook all the time), Japanese sweet potatoes have a purplish-red skin and a pale, cream-colored flesh. Its texture is denser, drier, than the orange variety, and fluffier in the sense of being more like a regular potato.  I love its sweetness, and it's a special kind of sweetness that I think is somewhat more subtle than the orange variety.
I have gotten into the habit of eating a big roasted Japanese sweet potato for lunch, along with some other vegetables, most weekdays.  It's a habit I can't seem to kick and don't really want to for now.
I have to admit I love it for the pure sweetness.  I literally like to lean into one of these piping hot sweet potatoes and just inhale the sweet, caramelized aroma.  It's really heavenly!  It's also super hearty and satisfying.  In other words, it helps satisfy my insatiable craving for carbs and sugar, in a more natural way.
I got to thinking recently about this little obsession of mine with the Japanese sweet potato, and a light bulb went off!  I realized I love it because it is very, very much like chestnuts in both taste and texture...and I am crazy about chestnuts!  It all started making sense.

The good news (for me) is I can get my hands on these Japanese sweet potatoes pretty much all year round.  They can be found at Asian food markets and I noticed that Whole Foods has started carrying organic ones in the last few months, which makes me so happy.  I remember occasions while shopping at Mitsuwa, a Japanese market, where there would be a vendor outside with a small barbecue pit during the wintertime, selling hot roasted Japanese sweet potatoes.  The smell was unbelievable.  In Japan, you might be lucky enough to find stone-roasted sweet potatoes.  As heavenly as that sounds, I make do by roasting mine in the oven.  It takes at least an hour, often longer, but it is so worth it. 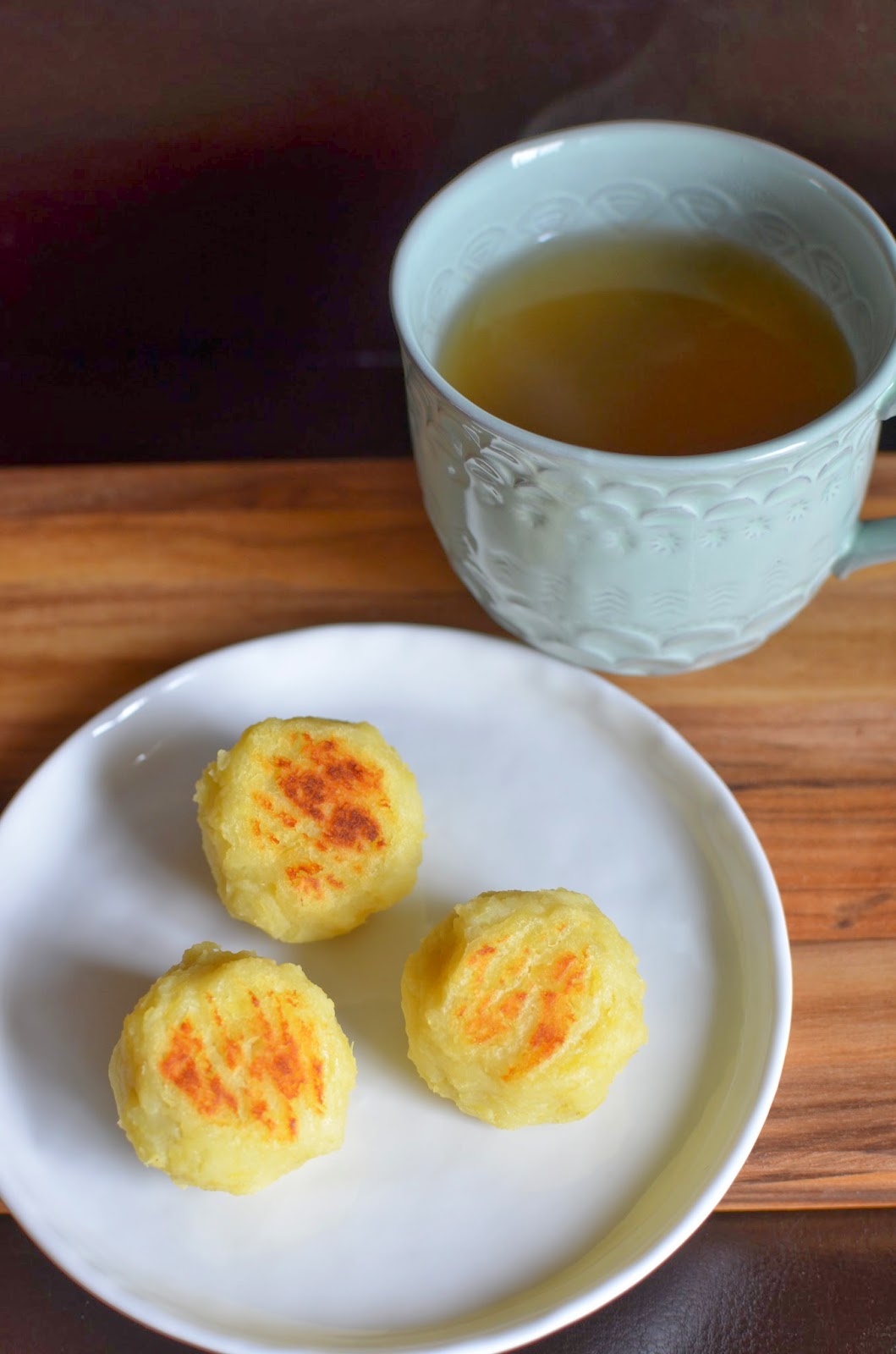 There are many types of Japanese wagashi, or sweet confections.  Mochi is probably the most common one that we're familiar with.  They can take on many different forms, with different ingredients.  To give you an idea of some more-colorful, intricate wagashi that might be served as part of a Japanese tea, take a look at this example:
This box was given to me by the mom of a former Japanese classmate of my son's. The family had actually moved back home to Japan but were nice enough to visit us one day when they came back for a summer vacation.  She brought this box of beautiful confections that were almost too pretty to eat.  I had to take a picture, and now I'm really glad I did so I can share it here.

As you can see, those candies are very different from what we're doing here today.  Frankly, I could have done a better job with these little sweet potato balls but I was pretty casual about it and simply enjoying the fun of making something simple.  It got me thinking about the culture of taking tea around the world and how much I personally enjoy my daily cups of the brew. 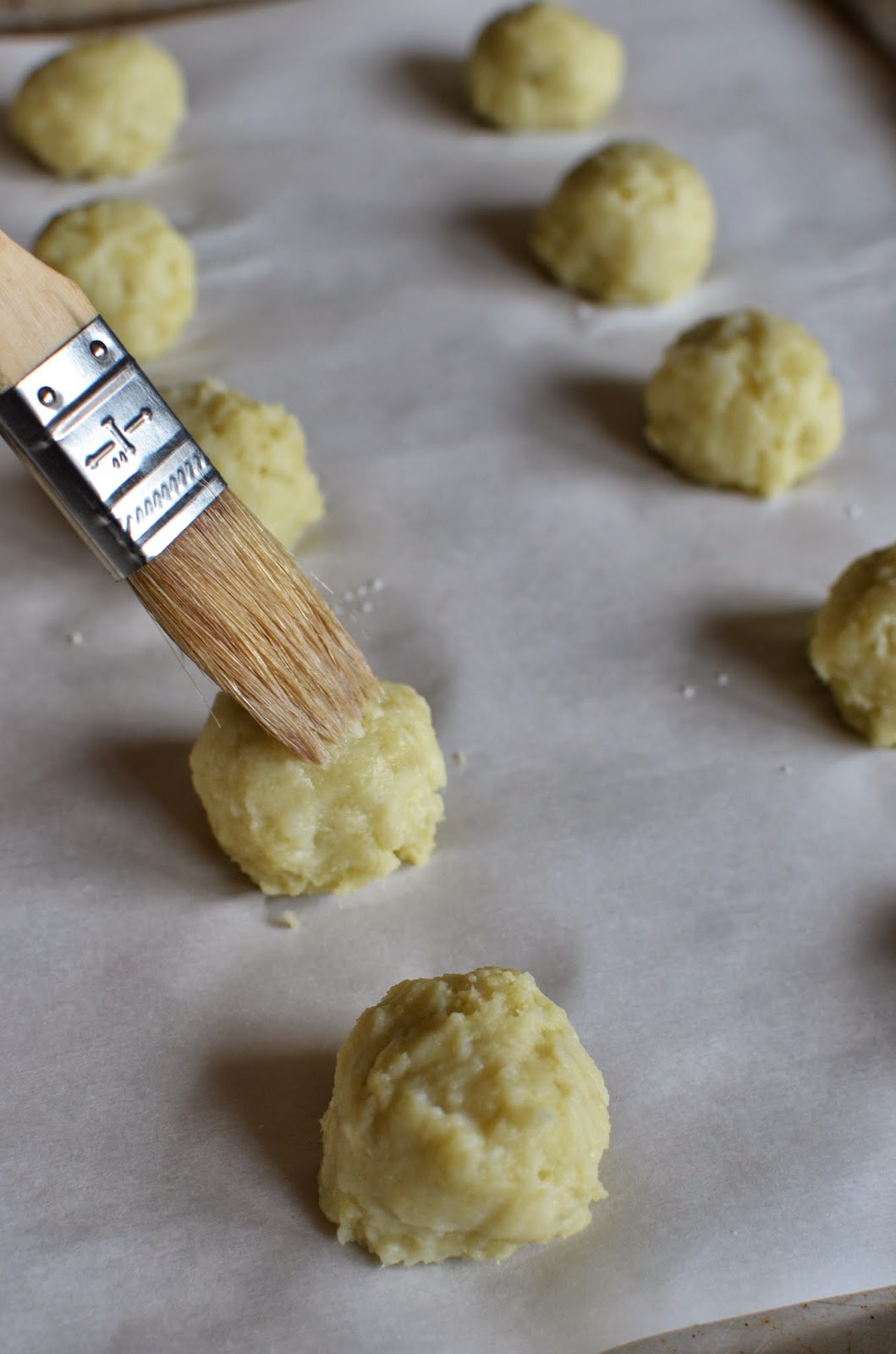 In the interest of full disclosure, I want to mention that I didn't feel like cracking an egg to brush the sweet potato balls with egg yolk and used some milk that was already on standby instead.  The tops never did brown and the golden-brown marks what you see are actually the bottoms (hence, the somewhat flattened shapes).  I didn't expect much color with just the milk as glaze but it literally stayed anemic looking in color.  I hope you'll forgive my weak interpretation of this home-style wagashi. 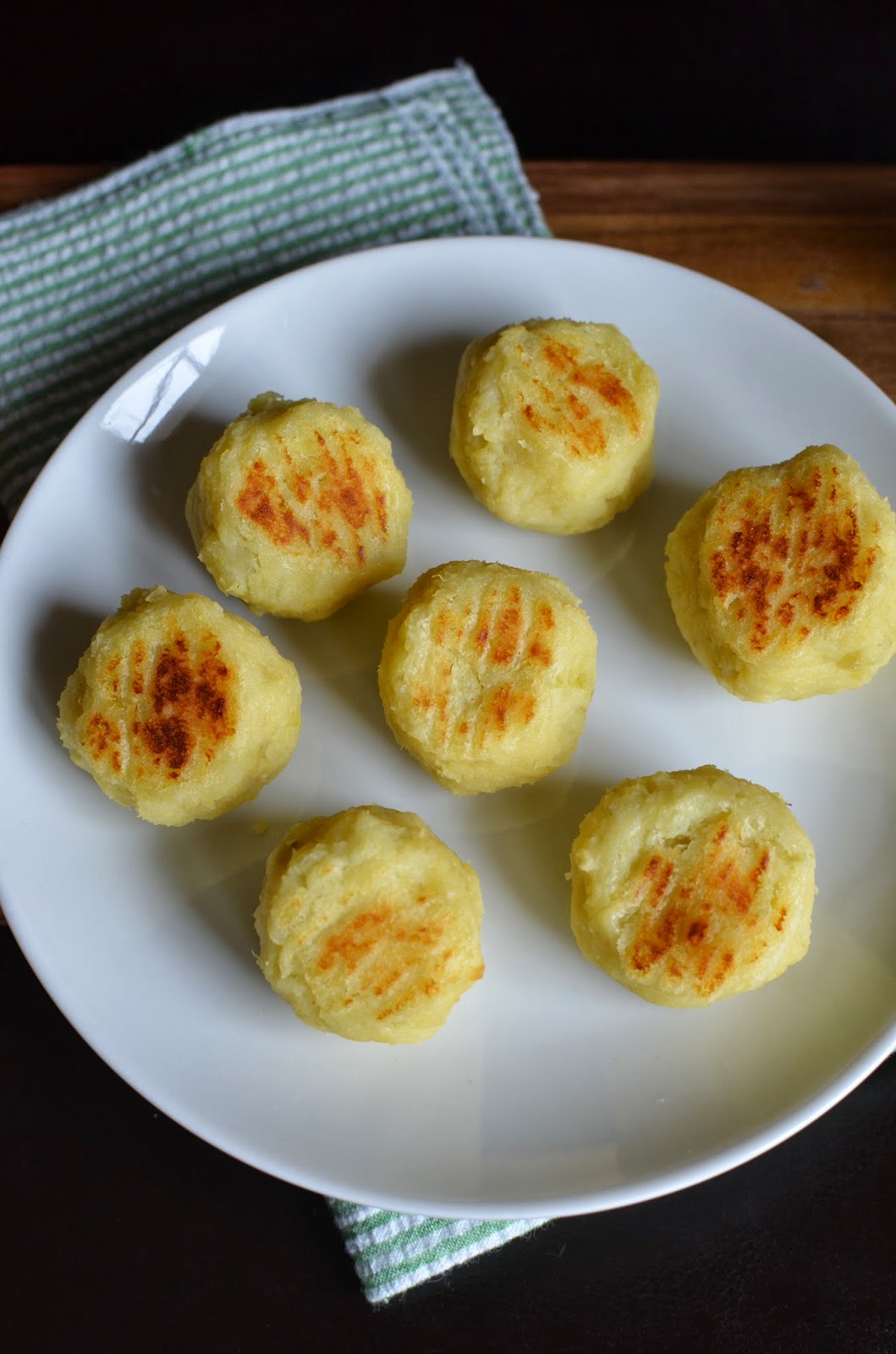 The sweet potatoes are obviously naturally sweet and with the milk and a little bit of extra sugar, they really do stand in nicely as a sweet treat with afternoon tea.  My little one might have been a little surprised by this particular sweet offering for the afternoon but he was game....he's a big fan of sweet potatoes too.

Japanese Sweet Potato Wagashi
Adapted from No Pasta for Penguins

Japanese "wagashi" refers to small confections served with tea. They take many forms and many are intricate and delicately designed. This home-style version is far more approachable and is essentially sweet potato balls, made with the delicious purple-skin Japanese sweet potato called, Sastumaimo.

1 Japanese sweet potato, approximately 10 oz. (or 285 grams)
1/2 tablespoon unsalted butter, softened
1 1/2 - 2 tablespoons sugar (granulated or brown; I used a mix)
3-4 tablespoons milk
1 egg yolk, for brushing (I used milk to glaze but that does not create much, if any, browning on top)

Place the hot, cooked sweet potatoes into a bowl.  Add butter, sugar, and enough milk to combine. Mash together with a masher or large fork until smooth.

Form small balls (you could use a small ice cream scoop to start and finish rolling them with your hands) and place onto the prepared baking sheet.  Brush the tops of each with egg yolk and bake until lightly browned, about 15-20 minutes.  Let cool and serve, slightly warm, with tea.