Surprise! We're taking a break from sweets on the blog today and going savory.  Believe it or not, I eat and cook other things besides cookies and cakes.  It's easier to take pictures of treats though...they seem to sit still a lot better than savory foods, I find. 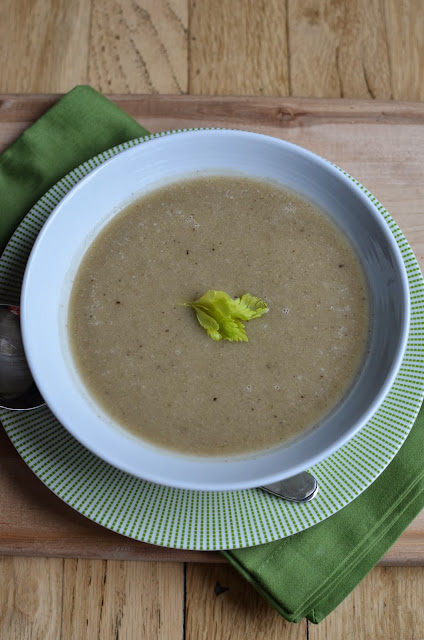 As I've mentioned before, I love chestnuts!  I love eating them plain, in dessert, or in savory dishes. This time of year, I try to buy as many fresh chestnuts as possible and enjoy them before they disappear from the supermarket.
So I've been eating my weight in chestnuts - or at least making space for them alongside all the Christmas cookies.  And in the spirit of my preference for easy everyday cooking most of the time, I thought I'd share this minimalist chestnut soup with you.  "Minimalist" because the recipe comes directly from the Mark Bittman, the Minimalist himself, and from the sheer fact that this soup recipe is so simple - almost bare-bones.
It's just a few ingredients - chestnuts, chicken stock, onions, and celery, essentially.  I used jarred chestnuts because I can't roast chestnuts for my life and though it's expensive, you might get lucky and find them on sale this time of year.   There's no cream or any dairy in this soup (nor potatoes or other kinds of vegetables, even fruit, that you sometimes find in chestnut soups) but it's robust and creamy.  The chestnut flavor is subtle - I find it almost difficult to describe their flavor here.  It contributes a nuttiness, almost a woodsiness, in the background that's hard to identify but so good.

The smell of this soup simmering on the stove reminded me of chestnut soup my mother made when I was a child.  I honestly don't think she made it very often but I always think about it.  It was one of those special foods I recall enjoying and appreciating even as a kid.

If you want something a bit more complex (though it will inevitably take away from the chestnut flavor), you could customize this soup in many ways.  Some chestnut soups have potatoes in them. To make it creamier, some might add a splash or two of milk or cream to finish (I don't think it's necessary though). You could even add some bacon, pancetta, or even bits of chicken if you want a little saltiness and more heft to the soup than what we have here.  And what we have here is a basic base of some onions and celery, together with chicken stock, to give this soup its backbone. 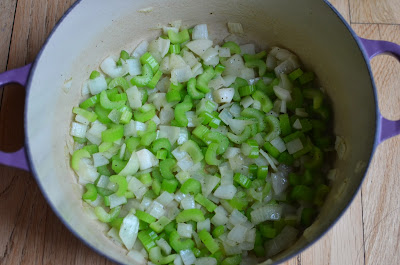 There's a good amount - 2 cups - of celery in this soup.  It's funny because as a child, I hated celery.  My mom would cook it in some kind of stir-fry and I was not a fan.  To this day, I don't like raw or crunchy celery but I've always tolerated (and now enjoy) celery in soup.  I don't mind it at all when it's soft and the same goes here.  I enjoyed it plenty, in fact.

Now, when you cook with onions and celery, you probably automatically think carrots, like I do.  Mark Bittman doesn't recommend carrots because he feels their sweetness overwhelms the chestnuts.  I resisted the urge to add even a small carrot in here and I'm really glad I did.  The carrots would have hogged too much attention, and it's nice to let the mild sweetness of the chestnuts themselves add their magic. 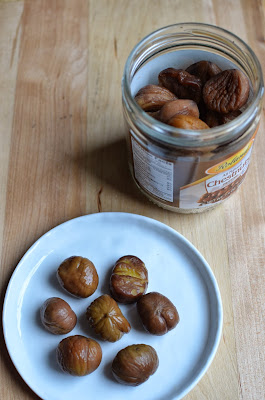 A quick word on the chestnuts.  You could certainly roast your own if you have the patience and skills that I admittedly lack.  Peeling chestnuts - particularly their skin - is not a fun or quick task. This recipe originally called for 10 "large" chestnuts.  Mine were not large so I practically doubled up on the amount.  In my experience, use more when in doubt!  You can always thin the out soup once finished if necessary but you can't just add more at the end. You want to make sure you have enough chestnut so that it's chestnut soup, not just celery and chicken soup. 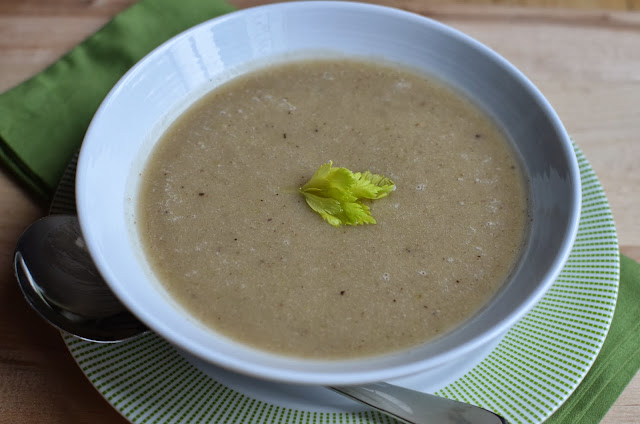 For a little texture, try adding some coarsely chopped chestnuts into the soup before serving to reinforce the flavor.  I really liked that because I can't ever have too much chestnuts!  My mother's chestnut soup was never pureed and finding the chunks of chestnuts was like finding the golden treasure!

If you find yourself with extra chestnuts, try chopping them up and adding to roasted brussels sprouts or as a topping for other starchy soups.  I'm sure you're familiar with chestnut stuffing and they go well with braised chicken and many other things, really, since their flavor is so mild.  Of course, you could always just eat them plain!

Heat butter or oil in a heavy-bottomed pot over medium heat.  Add celery, onions, and a healthy dash of salt and pepper.  Cook, stirring occasionally, for about 10 minutes, until onions are translucent.  Add stock plus a half cup of water.  Add chestnuts, bring to a boil, then partially cover the pot and let simmer until chestnuts are mushy, about 30 minutes.

Let cool slightly then carefully puree the soup with either an immersion or in a blender.  Thin the soup out with a bit more water, if necessary.  Taste, and season with more salt and pepper, as needed.

Before serving, garnish with a sprig of celery leaves or add a few pieces of chopped chestnuts into the soup for a little texture, if desired.