You know that saying, "if at first you don't succeed, try, try again," or maybe "third time's the charm".  There must be some truth to it because I finally did it!  My third attempt at making macarons worked!  They all came out with "feet" and peeled off the baking sheets beautifully.  I nearly jumped for joy.  So I present you with my six-year old son's favorite macaron flavor: coffee.  I topped some with a sprinkling of cocoa nibs and filled them with chocolate ganache.  Being the proud chocoholic that I am, I've decided to stick with ganache filling as opposed to buttercream. 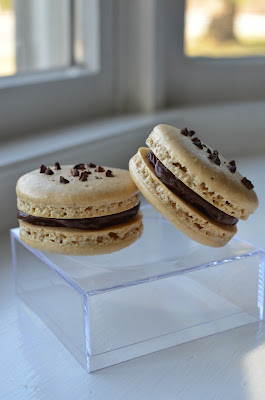 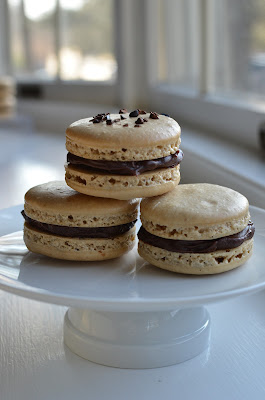 At first, I intended to try chocolate macarons one more time to try and finally get it right.  My very first attempt was delicious but a delicious disaster.   The second try came out a lot better but was inconsistent and the macarons still stubbornly stuck to the baking sheet.  I really wanted to get it right and make the chocolate ones (my personal favorites next to hazelnut/praline and maybe pistachio) one more time before moving on to other flavors.  But I thought to myself: "why be so rigid?"  I should try something different.  My son loves the coffee ones and has asked me to make them so I decided to give those a whirl instead.  And it finally happened.  We have authentic macarons in the house! 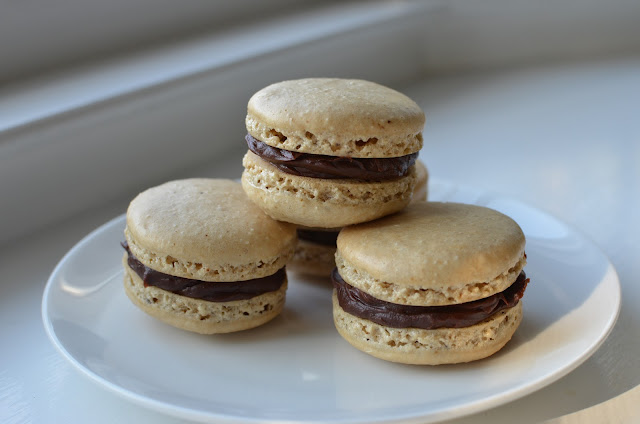 The first, and major, advantage I had this time around was a properly working oven.  I didn't realize the first time I made macarons that there was something off with my oven.  The second time around, I started to have an inkling.  Turns out, the lighter in the oven needed replacing, and now it quickly fires up nice and hot.  I also learned from books I've read and websites I've visited.  All the information confused me but also helped.  Specifically, the tips in Alice Medrich's book were very helpful and I took her advice about giving the macarons a head start (to "lift off") by heating the oven at a high 400 degree before turning it down to 300 when the cookies went in.  I also baked them longer this time.  It worked. 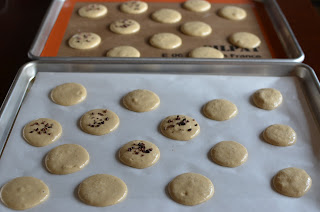 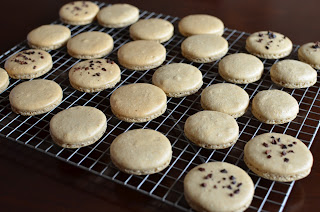 And miraculously, the macarons came off both the parchment paper and silpat with ease.  Despite how good they looked out of the oven, I was dreading the removal because I'm used to them sticking stubbornly to the parchment paper.  But in this case, the overwhelming majority of these practically peeled right off.  No need to pour warm water under the parchment paper or other tricks.  The backs are so smooth and undamaged, they almost look like the tops. 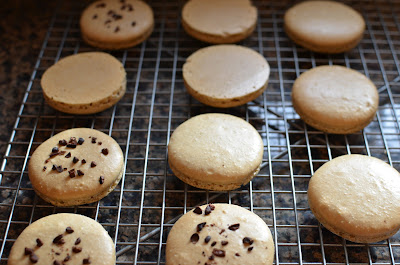 I really adore macarons.  Not only do they look lovely but I love the taste of the ground nuts in the macarons and its texture.  The outside is crisp and shatters under your bite into that chewiness that surprises you even though you expect it. 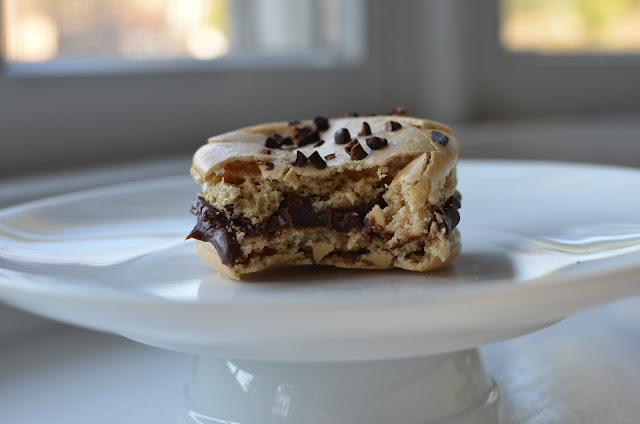 So I'm happy to report my successful macaron story today.  I know I still have a lot to learn and who knows how the next endeavor will turn out, but that's alright.  I thoroughly enjoyed the appreciative "mmm..." sound that came out of my little guy's mouth when he tasted these.  We definitely share a love for pastry and confections.


I'm still using the very lovely Tartelette blog for my macaron inspiration.  The recipe I used for the coffee macaron shells is essentially this but I incorporated some of the other tips I've learned.

Here are the line-up of ingredients for the macarons.  It includes 3 egg whites, confectioners' sugar, almonds, a bit of granulated sugar to whip with the whites, and some espresso powder for the coffee flavor.  I also used some cocoa nibs to top some of the shells. 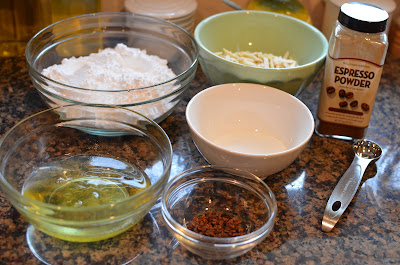 Grind the almonds, confectioners' sugar, and espresso powder together in a food processor until the almonds are very fine.  Pass the mixture through a medium-coarse sieve.  Note from my previous attempts that you must use a medium sieve or you will be pulling your hair out trying to get it through a fine-coarse sieve.  I pass it through once and if necessary (and it's always necessary), I run the remaining lumps (large pieces remaining at the bottom of the sieve) back through the food process again and run it through the sieve again. 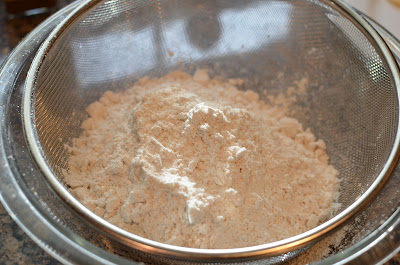 Then whip the whites, along with the granulated sugar, until stiff peaks form. 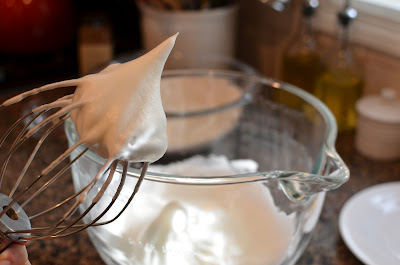 Now here we go with incorporating the two together.  Add the almond and confectioners' sugar mixture to the egg whites.  Give it a quick fold to break up the air a bit (according to Tartelette) and then carefully fold the mixture together.  You can really smell the coffee flavor now.

I feel like I tend to overmix but ideally, the mixture should be thick and "lava-like."  Tartlette also says it should not take more than 50 strokes.  I think it's helpful (and I keep reminding myself) to take it slow.  There is no time limit.  Fold it a couple of times and check it.  When it looks incorporated, take a spoon and dollop it on a plate.  The batter should hold its shape but slowly fall back onto itself where the top flattens. 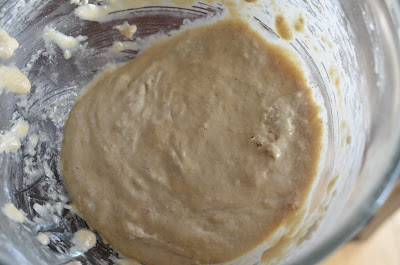 Place the batter into a pastry bag with a tip about 1/2 inch wide (I use Ateco #807) to pipe onto parchment or silpat lined baking sheets.  In a pinch, cut a 1/2 inch opening on the pastry bag itself. 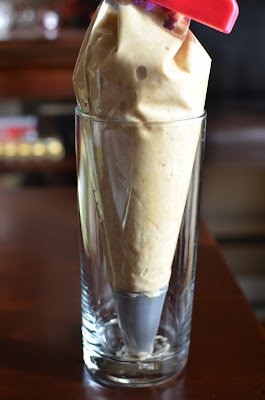 When you pipe the shells, hold the pastry bag directly and straight on top of the baking sheet and just give it a teeny twirl around to finish each off.  I made them a bit on the larger side today (not really intentionally) but generally, about 1 1/2 inch wide is common. 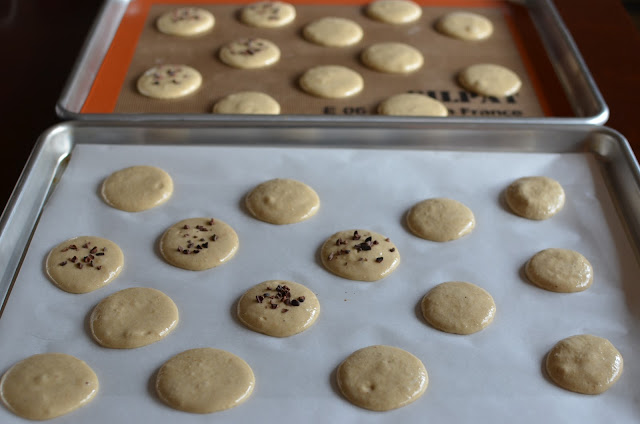 If you're interested in topping the shells with cocoa nibs, do it now after the rounds have just been piped.  Then rap the sheets a couple of times on the counter or table to get rid of any air pockets.  Let the shells sit for about 30 minutes at room temperature so the tops dry to get that crisp outer shell.  Preheat the oven at 400 degrees but as you put the baking sheets in, turn the oven down to 300.  Bake for 18-20 minutes (depending on size) and I was rewarded to two trays of macarons with beautiful, pronounced "feet." 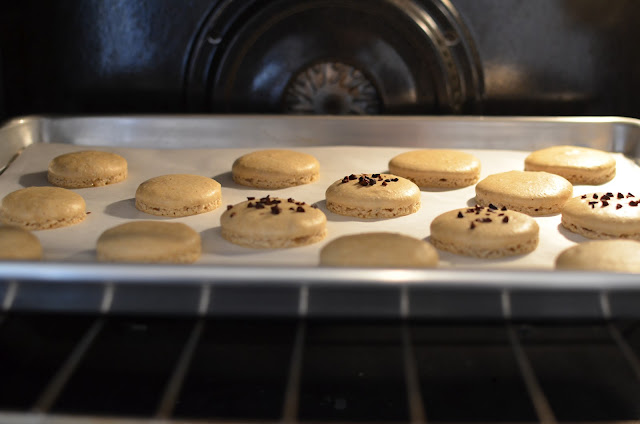 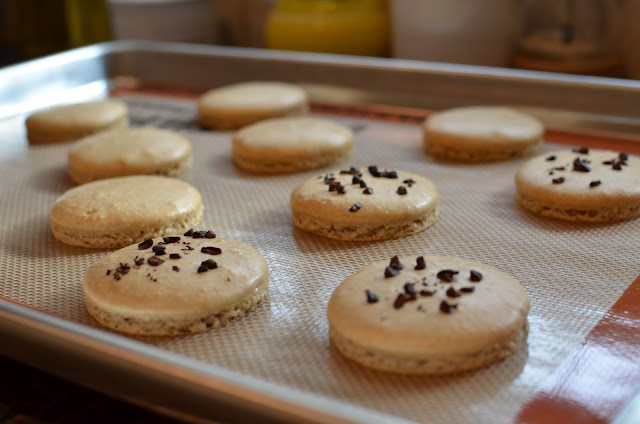 Let them cool completely and the macarons actually came right off the parchment and silpat.  I wasn't sure it was possible but I have smooth, smooth bottoms...happy sigh. 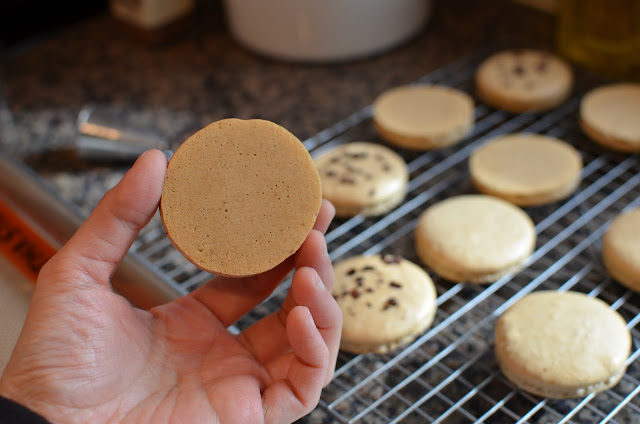 I'm not a big fan of eating buttercream so I opt to stick with chocolate ganache filling for these and other macarons I make going forward.  I use David Lebovitz's recipe, which makes more than enough to amply fill the macarons I made. 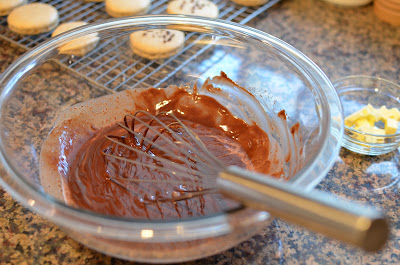 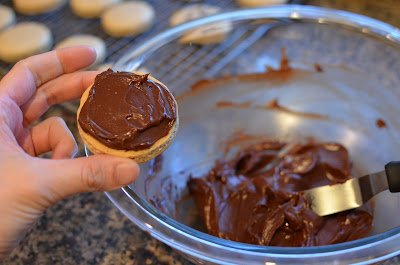 We thoroughly enjoyed the sweet taste of success in our macaron-making! 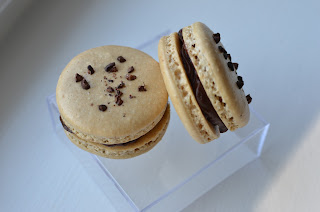 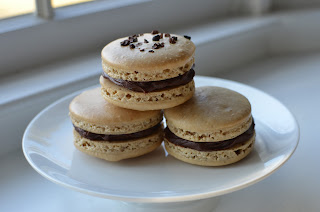 Coffee Macarons with Ganache Filling
Recipe for macaron shells adapted from Tartelette (I've incorporated techniques I learned in other places and this is what worked for me); Ganache recipe from David Lebovitz

Grind the almonds, confectioners' sugar, and espresso powder in a food processor until the nuts are finely ground and it looks like fine powder.  Pass the mixture through a medium-coarse sieve.  If there are large lumps remaining at the bottom of the sieve, place them back in the food processor and repeat.

Fill the batter into a pastry bag fitted with a plain tip that has about a 1/2 inch opening (I use Ateco #807).  Pipe 1 1/2 inch (or size you prefer) rounds onto parchment or silpat lined baking sheets at least an inch apart.  If using, sprinkle cocoa nibs on top of half of the macaron shells (you could top all the shells with cocoa nibs if you prefer).  Rap the sheets 2-3 times firmly on the counter.  Let the macarons sit for about 20-30 minutes until the surface of the shells are slightly dry.

When fully cooled, spread ganache onto one macaron shell and sandwich with another (if using cocoa nibs like I did, spread ganache on a plain shell and top with one that has cocoa nibs).  Many people say macarons taste better with a little rest in the refrigerator.  Store them in an airtight container in the refrigerator for several days and bring them up to room temperature before eating.