Almost fudge gâteau for a gathering

My family came over for a little coffee klatsch last weekend.  It was a great excuse to get in the kitchen and bake something.  I keep a list of things I want to make and I decided to go with the "Almost Fudge Gâteau" from one of Dorie Greenspan's books. 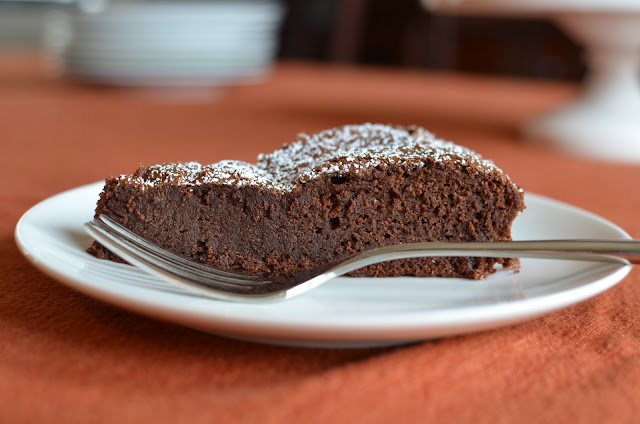 I figured a wedge of chocolate cake would be nice with a cup of coffee in the afternoon and be popular with the kids (most of them anyway; my young niece is neither a fan of most chocolates or desserts for that matter...she prefers strawberries).  For me, I love any excuse to make and eat something with chocolate. 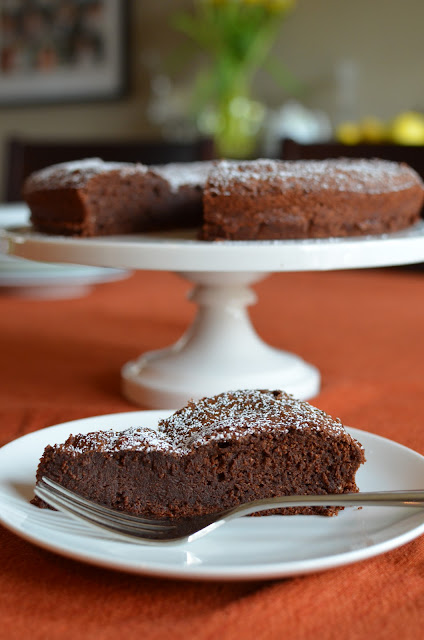 This is one of those basic, pure chocolate desserts.  Kind of like a little black dress, it's relatively simple but timeless.  When it comes to this gâteau, or cake, think flourless chocolate cake but with more structure since there is a modest amount of flour in the recipe.  It doesn't look like much - pretty rustic, in fact, with its sunken middle, but it is that wonderful kind of one-layer/no frosting kind of cake that I love to make and enjoy. 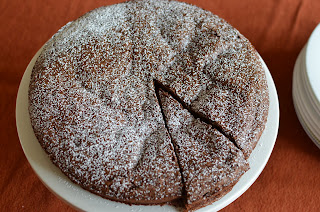 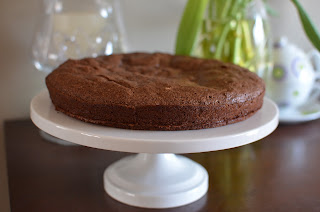 You could make a chocolate glaze for this cake but I opted out of that.  Without the glaze, it's not quite as decadent but a nice simple weekend afternoon treat.  Some of us enjoyed it with a scoop of ice cream but I thought it was nice all on its own.  The young boys in our family (my son and two of his cousins) wanted the cake with chocolate ice cream; I guess some of us can never have too much chocolate. 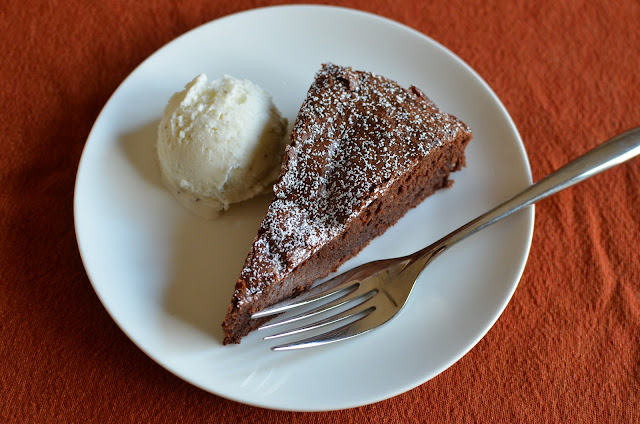 I think I'll keep this little black dress of a recipe in my files.

This is a pretty simple recipe you mix by hand - the process is sort of meditative and I really enjoy it.  Start by prepping a 9-inch springform pan.  Grease it with butter, line the bottom with parchment, greasing the paper, and then dust the whole thing with flour.  I recently spotted and bought a cooking spray made for baking that already has flour in it; I've been using it as a short cut (although I have to say that it's rather heavy and hard to apply a light coating).

After the cake pan has been prepped, place 9 ounces of chopped bittersweet chocolate, 1 cup of sugar, 5 tablespoons of butter, and 2 tablespoons of water or coffee (I used water but also added 1/2 teaspoon of instant espresso powder) into a heatproof bowl.  Set the bowl over a pan of just simmering water to melt. 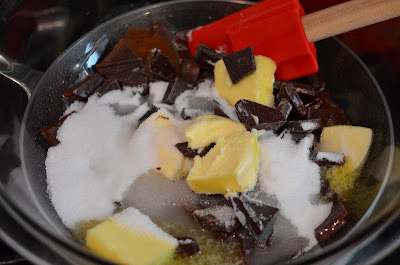 Stir occasionally until the chocolate and butter have melted (it will still look grainy).  Remove the bowl from the pan and set aside to cool slightly for about 3 minutes. 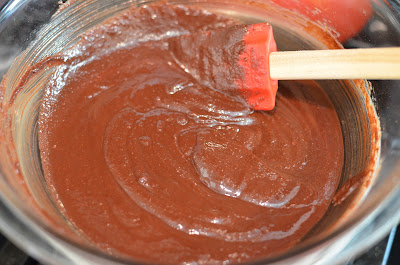 Then stir in 5 egg yolks, one at a time, with a rubber spatula. 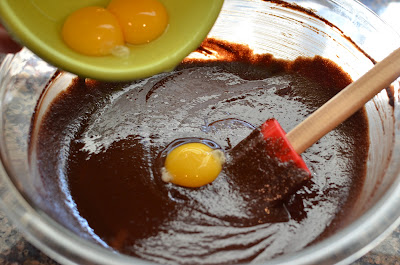 Gently fold 1/3 cup of flour into the mixture. 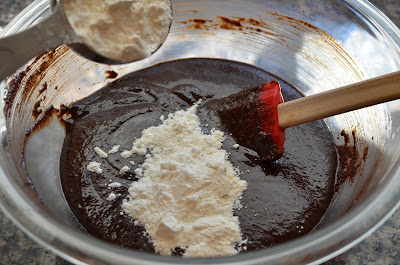 The mixture, somewhat like a brownie batter, is nice and thick at this point.  We then take 5 egg whites and whip them in a stand mixer with a pinch of salt until they are firm and glossy.  I have to say that I'm not very good at whipping egg whites without sugar.  I always tend to over-whip them and they look like they're starting to separate so watch closely.  When the whites are whipped, stir a quarter of it into the chocolate mixture to first lighten it up. 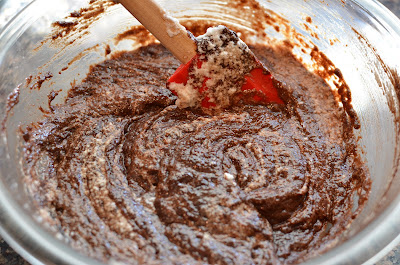 Then more gently fold in the remaining whites.  Scrape the batter into the cake pan and move the pan around a few times to evenly distribute it. 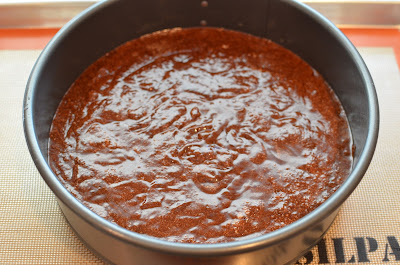 In a 350 degree oven, the cake should bake for 35 to 45 minutes until it has risen evenly (not only the sides but middle as well).  It will be firm, and possibly cracked, on top, while a toothpick or thin knife inserted into the center comes out with just a bit of chocolate attached.  I think I could've taken my cake out maybe 2 minutes earlier for a slightly more fudgy interior but it sliced up quite nicely the way it was.  Let the cake cool for 5-10 minutes before running a knife around the edges and removing the sides of the pan.  With a little maneuvering, turn the cake out, remove the parchment lining and turn it back up right to cool completely (it is firmer and easier to handle than you might expect but be gentle nonetheless).  As it cool, the center of the cake sinks. 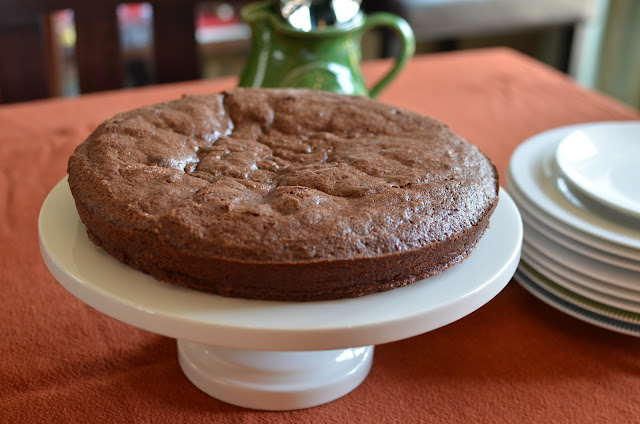 There is an optional chocolate ganache glaze you could make and pour over this cake but I decided to skip it.  I dusted it with a bit of confectioners' sugar and had some ice cream on standby to go with it.  We were ready for our little gathering.  The lovely thing about making a cake is to be able to share it with a big group.  So while the adults sat down one Saturday afternoon over coffee and a slice of this cake, our boys flew back and forth to the table scarfing theirs down at lightening speed.  They told me they really liked the cake but you see, they were playing videogames with each other and there was hardly a minute to spare. 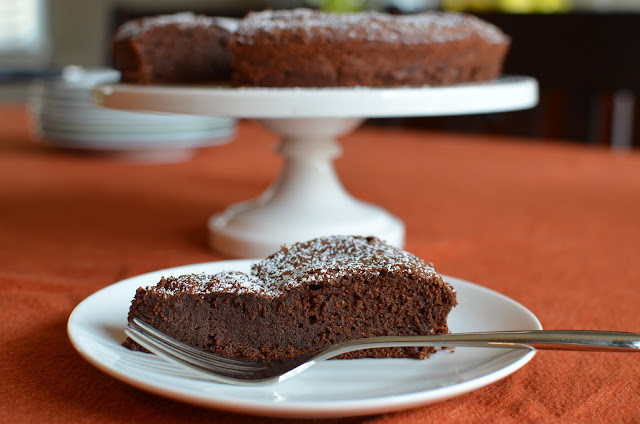 Almost Fudge Gâteau
From Baking: From My Home to Yours by Dorie Greenspan

Prep a 9-inch springform pan by greasing it with butter and lining the bottom with parchment paper.  Butter the paper and dust the pan with flour, tapping out the excess.  Set the cake pan on a baking sheet and preheat the oven to 350 degrees, with an oven rack placed in the center.

Place egg whites in the bowl of a standmixer and the yolks in a small bowl.

Put chocolate, sugar, butter, and coffee or water (I used 1/2 teaspoon of espresso powder with the water) in a heatproof bowl.  Set bowl over a pan of just simmering water.  Stir occassionally until chocolate and butter is melted.  The mixture will still be grainy.  Remove bowl from the pan and let cool for about 3 minutes.

Stir in egg yolks, one at a time, with a rubber spatula.  Then, fold in the flour.

Whisk egg whites in the stand mixer with a pinch of salt until they hold firm and glossy peaks.  Stir about one quarter of the whites into the chocolate mixture with the rubber spatula to lighten the batter.  Then gently fold in the remaining egg whites.

Scrape the batter into the prepared cake pan, moving the pan around side to side to evenly distribute the batter around the pan.  Bake for 35-45 minutes, or until the cake has risen evenly (the edges as well as the middle).  The top of the cake will likely be cracked and a toothpick or thin knife inserted into the center of the cake should come out just slightly streaked with chocolate.  Transfer the cake to a cooling rack for 5-10 minutes.

Run a knife around the edges of the cake pan and remove the sides of the springform pan.  Carefully turn the cake over onto a rack and remove the base of the pan as well as the parchment paper.  Invert the cake back right side up to cool completely.  The center of the cake will sink as it cools.