What I know about football and the Superbowl can be summarized as follows.  When it comes to the sport itself, I know there's a quarterback who handles the ball a lot and something called a field goal, a punt, and, of course, a touch down.  When it comes to the Superbowl, I know people like to eat things like chips and wings while watching the game and there's a halftime show involved.  That's about it. 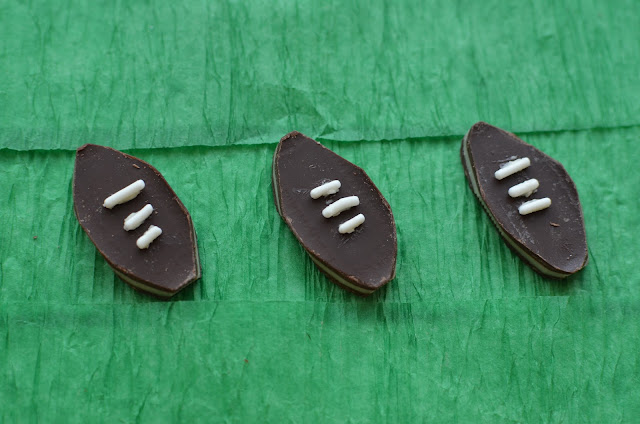 While it may be fair to call me fairly ignorant when it comes to football and most sports in general (I did love to watch basketball with my brother back in the Michael Jordan days), even I appreciate the excitement that comes with organized sports and rooting for your home team.  The New York Giants are in the Superbowl this year!  Go Giants! 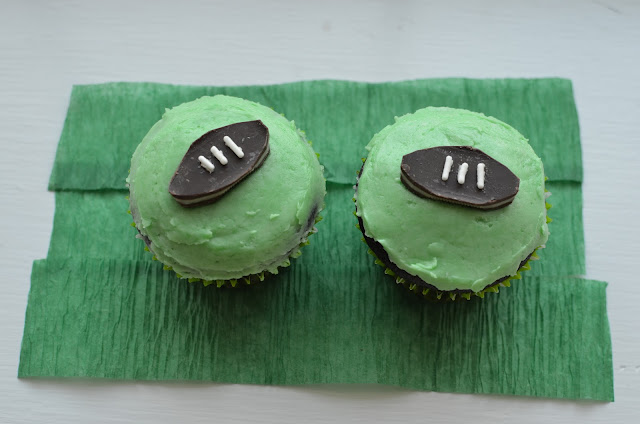 Our six-year old has been really into watching football this year.  He gets so excited and there's an abundance of shouting and cheering during games, with the demand to "pause the show" for him when he needs a bathroom break.  So there is much excitement about Superbowl Sunday this weekend.  Staying up for the entire game may be a bit of a stretch for him at six years old but we're still setting the stage for the game.  Chips, wings, pizza, chocolate egg creams are in place.  And football cupcakes are ready for dessert. 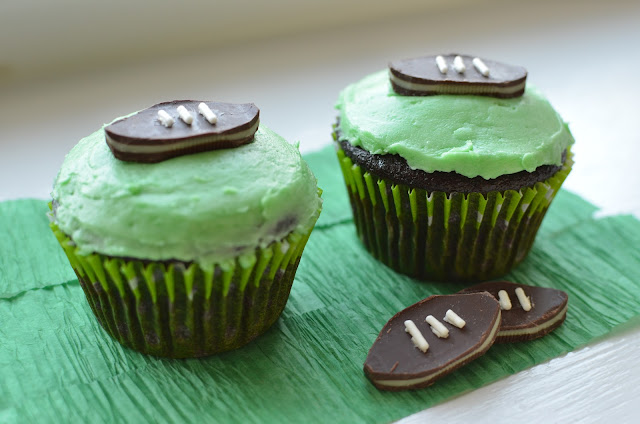 These football cupcakes were inspired by Lucinda Scala Quinn and her show, Mad Hungry.  Rather than cupcakes, she made a grasshopper cake and topped the frosting with these chocolate mint "footballs", which are just cut out from Andes Mint candies and topped with a few white sprinkles.  So clever and simple!

I used swiss meringue buttercream and added a bit of gel paste food coloring to tint it green (I would've liked it a little lighter in color).  I'm not a big fan of plain buttercream but it's great to play around with for occasions when you want to decorate something.  To be honest, I'm not totally sure I'm making the plain swiss buttercream correctly.  I find it smooth but almost slimy/slippery (maybe it works best piped through a pastry bag and tip); it whips up a lot smoother and fluffier when I add good stuff like melted chocolate or praline paste to it.  This is only my second attempt and you can see how I learned to prepare swiss meringue buttercream here.  The recipe at the end of this post makes enough frosting for roughly 12-14 cupcakes.

The footballs are really very easy to make.  You need some Andes Mint candies, white sprinkles, a little bit of the plain frosting as "glue" and a sharp paring knife.  A couple of toothpicks to help with the frosting and moving the sprinkles around is good too. 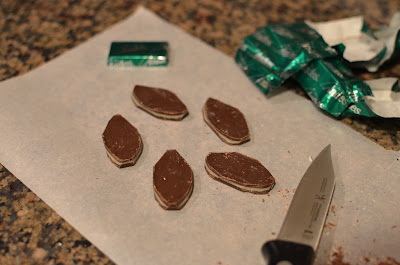 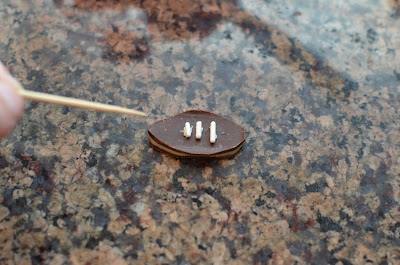 Place egg whites and sugar in the bowl of a stand mixer set over a pot of simmering water.  Whisk until mixture is warm and sugar has melted (when you touch it, it no longer feels grainy), about 3 minutes.  Wipe the outside of the bowl and transfer it to the stand mixer.

Whip on high, using the whisk attachment, until stiff peaks.  Then add butter, a tablespoon or two at a time, whisking until incorporated after each addition.  The mixture might separate and curdle but keep beating and it will come back together.  Add vanilla and transfer to the paddle attachment (I find using the paddle attachment near the end is really important to getting a smooth buttercream).  Beat, scraping the sides and bottom of the bowl as necessary, until buttercream is smooth.

You can mix in food coloring to get desired color.


* To make chocolate swiss meringue buttercream, add 6 ounces of melted semi-sweet chocolate to the plain buttercream and beat together with the paddle attachment until evenly combined and smooth.