Not bagels or donuts

When I was making these, I thought they looked so much like bagels.  Of course, I'm thinking of things we're probably trying to ease up on right now. 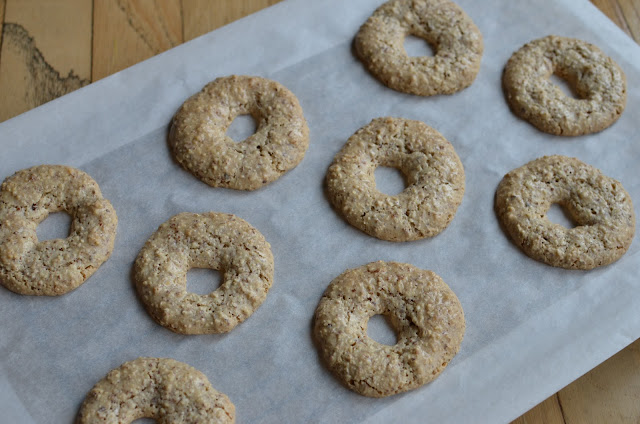 Then they made me think of donuts.  Boy, I love a donut from you-know-where.  My childhood and still current favorite (the only kind I eat, actually) is a regular donut with chocolate frosting and sprinkles.  Another food we're probably avoiding post-holiday.  Honestly, I rarely indulge in a donut nowadays since I'm taste-testing so much at home but I have fond memories of buying them by the half-dozen as a kid (buying that many was a much better deal than buying a few separately - that's how I rationalized it).  When I was pregnant with the little guy, I wanted donuts but along with ice-cream, it seemed to stick with me right on my tummy and hips.  I remember my husband and I would go to the donut shop and I'd eat a small half to satisfy that craving. 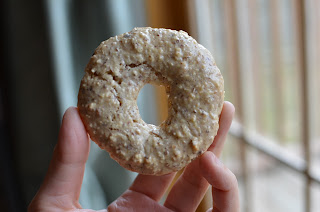 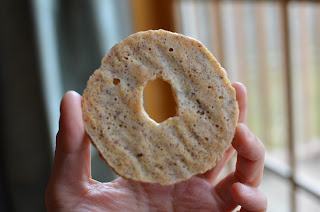 ﻿But I'm veering off-track again.  Let me tell you these are actually cookies.  Specifically, they are amaretti crisps, courtesy of Martha Stewart.  You and I may have had plenty of cookies during Christmas but if you're like me, you still want them in your life.  So along the lines of January and eating lighter, I'm thinking of meringues.  These amaretti crisps are basically meringues - toasted almonds pulverized with confectioners' sugar and folded together with stiffly beaten egg whites and a touch of almond extract.  That's it. 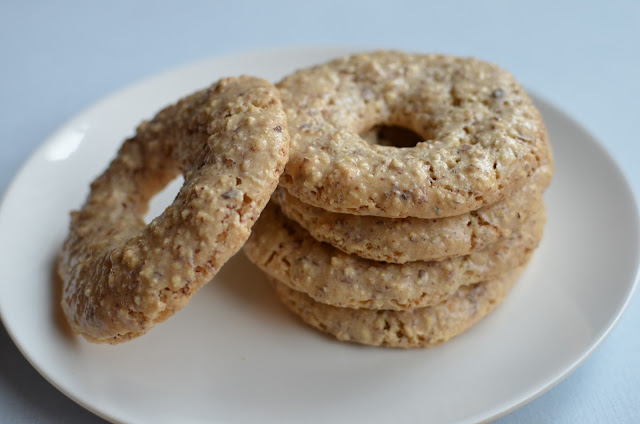 My family and I really enjoyed these.  I've been munching on them the last couple of nights and loving that toasted almond flavor and scent.  Like the classic Italian amaretti cookies, they are crisp and crunchy but these are also chewy in the center, which I love.  And as much as I adore rich chocolaty treats, something like this is delicious and just a great change of pace.  I followed instructions and piped these cookies into rings but also experimented with other simple shapes. 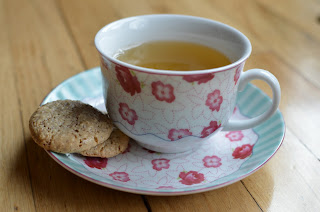 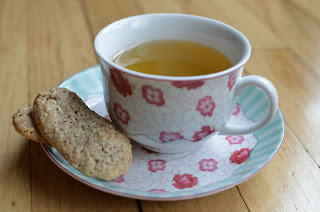 The little one in our family doesn't like to eat almonds whole but loves all these almond treats that come out of the kitchen.  He says they taste like macarons.  I can see the connection because they both have ground almonds and a chewy texture but these are far less fragile and practically hearty despite the lack of flour or butter.

So this is what I wanted to share with you today.  It's a 4-ingredient cookie that comes together quickly.  It does, however, require a bit of effort in the form of toasting the nuts, using a food processor, and piping.  I piped the batter out but I think just spooning them out into thick rounds would also work.  For me, these were worth a little extra effort - just call it exercise and reward yourself with a couple of these cookies.  And if you want to be naughty, spread a little something (like nutella) between two cookies or have it with a scoop of ice-cream.  I like it just the way it is though.


To make these amaretti crisps, you need: egg whites, sliced almond, confectioners' sugar, and almond extract.  As far as equipment, you need a food processor.  A pastry bag with a 1/2 inch tip attached is ideal for piping the rings but you can also fill the batter into a plastic zip lock bag and cut a tip.  In a pinch, you can also try spooning them out into thick rounds for round cookies. 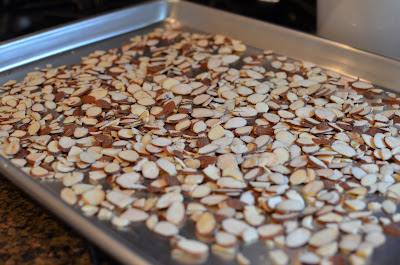 Then put the toasted almonds along with a cup of confectioners' sugar into the bowl of a food processor.  Process until it becomes a fine powder.  Transfer it to a bowl.  I was a little worried the cookies would have a cloying sugar/sweet aftertaste but not a problem at all - the flavor is distinctly almonds, with just enough sweetness. 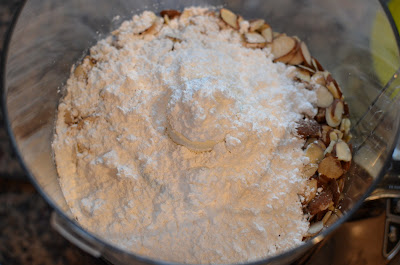 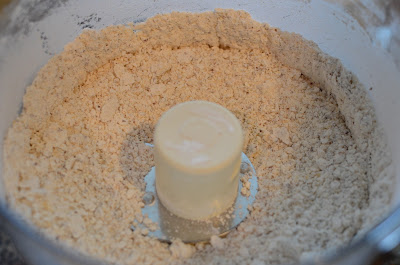 Whip 2 room-temperature egg whips in a mixer with the whisk attachment.  The recipe says for maximum volume, start whisking the eggs in a metal bowl, by hand, until the egg whites are just warm to the touch before transferring to the mixer.  Tell you the truth, I did do this but as far as I can tell, you can skip that step and just whip them in the stand mixer and save that step.  Once the whites are stiff, gently fold it into the ground almond and sugar mixture. 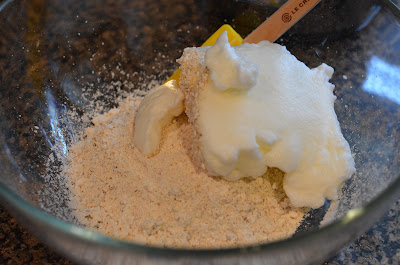 At first, you might be like me and think you read the recipe wrong and didn't use enough egg whites.  It doesn't look like enough to mix into all that powdery almonds and sugar.  But continue folding and it comes together.  Add half a teaspoon of pure almond extract near the end of the folding when it is just about fully combined. 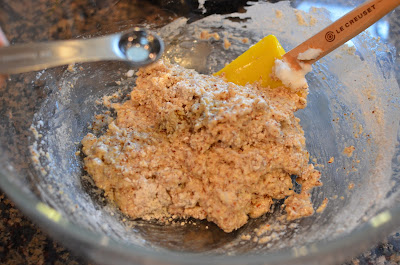 It's ready to be filled into a pastry bag. 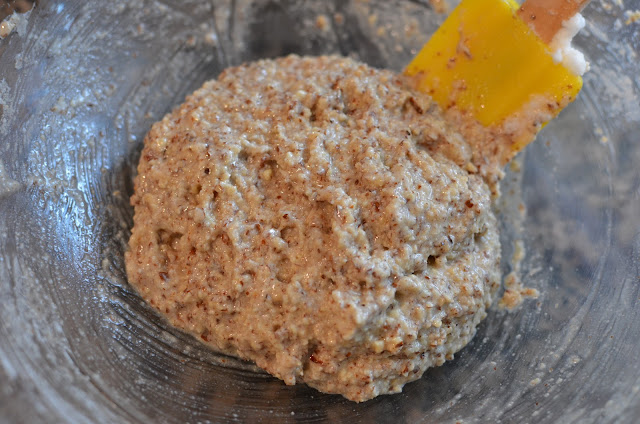 Again, if you don't have a pastry bag, you can put it in a plastic zip lock bag and cut a tip around 1/2 wide.  A 1/2 inch tip like Ateco #806 is recommended but I am using #807 since that's the closest thing I have.  The tip I'm using is just a bit wider than 1/2 inch so my cookies are a little bigger.  If you do not want to bother with piping whatsoever, I would just drop tablespoon fulls of the batter and bake them that way. 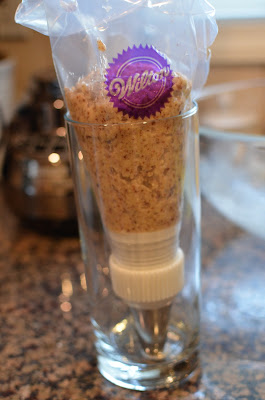 Pipe 2-inch wide rings on parchment lined baking sheets about an inch apart.  To be sure I didn't mess things up too much, I actually drew some 2-inch rounds on my parchment paper (then turn it around, pencil side down so it doesn't touch any of your cookie batter) to guide me but you can eyeball it. Unless you're a piping pro (I'm not), your rings may not be perfectly even.  As long as the circle is not broken, it's fine.  You can also fix it/even things out a bit with your fingertips if necessary. 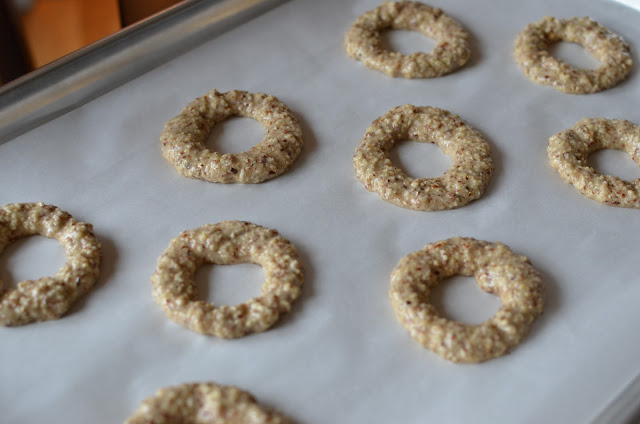 Bake the cookies for about 25 minutes, rotating the baking sheets mid way through the baking time.  They are done when they are dry to the touch and lightly golden brown.  I always check on my cookies early and I tried to take these out sooner rather than later so they're not totally crunchy and still have a nice chewiness to them. 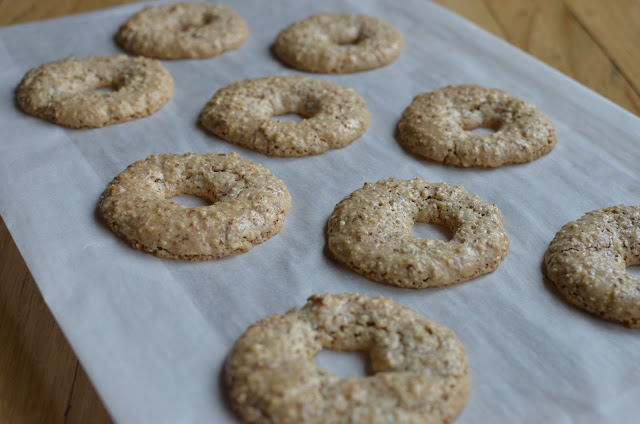 I played around and made a couple of other simple shapes.  I must admit that an attempt at a heart-shape came out very poorly and was not fit for publication. 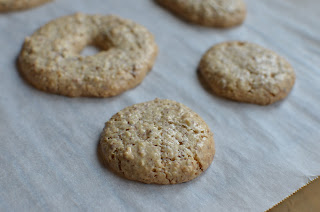 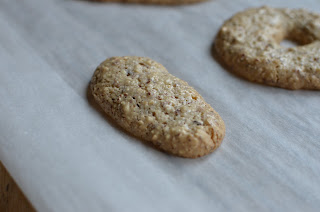 If you like almonds as much as I do, I think this is another recipe you'll enjoy since it's all about the almond. 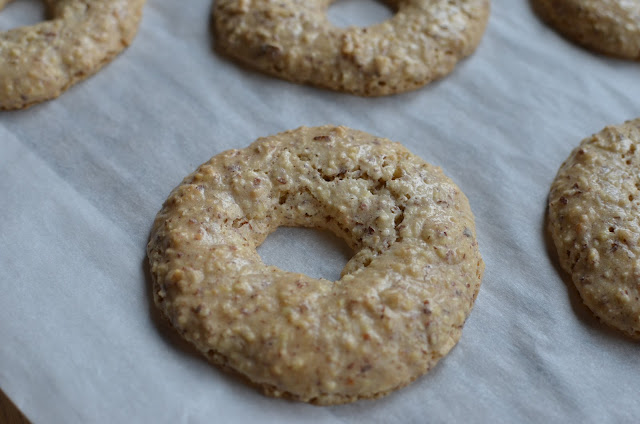 Preheat oven to 350 degrees.  Spread sliced almond evenly on a large, rimmed baking sheet and toast for about 10 minutes, stirring occasionally.  Set aside to cool for about 15 minutes.

Place toasted almonds and confectioners' sugar in the bowl of a food processor.  Process until ground to a fine powder.  Transfer to a bowl.

Put egg whites in the bowl of an electric mixer fitted with the whisk attachment and whip on medium-high speed until stiff peaks form.  (For maximum volume, start whisking the whites in a metal bowl set over a pot of simmering water until just warm to the touch before transferring to the mixer to finish.)

Fold egg whites into the almond mixture.  Fold in almond extract near the end when the mixture is just about combined.

Transfer mixture to a pastry bag fitted with a 1/2 inch plain round tip (such as Ateco #806).  Pipe 2-inch rings on parchment lined baking sheets, spacing them about 1 inch apart.  Bake for about 25 minutes, rotating the sheets halfway through the baking time.  The cookies are done when they are firm to the touch and lightly golden brown.  Transfer cookies on the parchment to cool completely on wire racks.  They will release easily from the parchment once cooled.

Store in an airtight container at room temperature for up to 2 days.