In my quest to present lighter treats this January, I have another merginue recipe today.  These are mocha meringues, flavored with cocoa powder and a bit of espresso powder.  Instead of chocolate chips, which you could certainly use, I mixed in bits of roasted cocoa nibs. 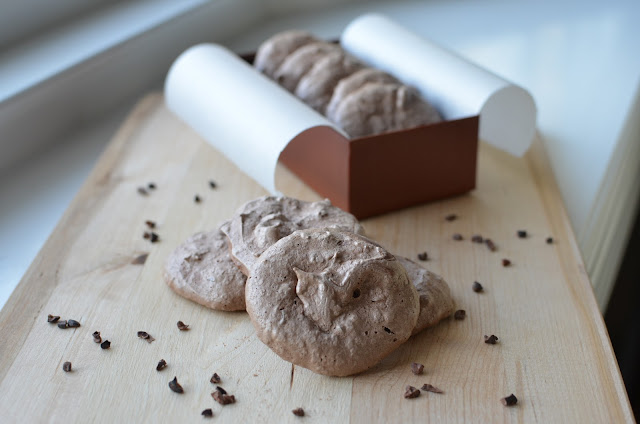 I've been wanting to experiment with cocoa nibs for a while now.  They are essentially bits of roasted cacao bean, or "raw chocolate" where sugar and other flavorings have not yet been added.  The nibs are crunchy and have a rich chocolate and coffee aroma and flavor to them.  I recently got my hands on some Valhrona roasted cocoa nibs and I'm using them for the first time in these meringues.  I think the cocoa nibs compliment the mocha flavor and give an extra bit of crunch and flavor without adding a lot of extra fat and calories.  As an added bonus, they're also supposed to be quite good for you and very high in antioxidants. 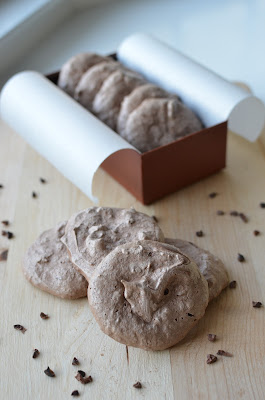 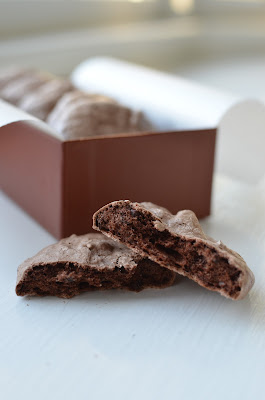 The bit of cocoa and espresso powder really give these meringues quite a lot of flavor while the cocoa nibs add a richness to them.  They are crisp, almost hard on the outside, but nice and chewy on the inside.  I think the trick to making meringue is to really whip the egg whites enough so that you get true stiff peaks.  I don't think I've quite mastered this yet since my meringues spread more than I expected and I suspect I could've whipped those whites a bit further.  Meringues are certainly a low calorie option as far as cookies go since we're basically dealing with just egg whites and sugar, with flavorings (in this case, cocoa and espresso powder) added on.  Supposing you're not concerned about calorie count or fat grams, you could enjoy these meringues with some ice cream.  This bowl here was just for my little guy - honest. 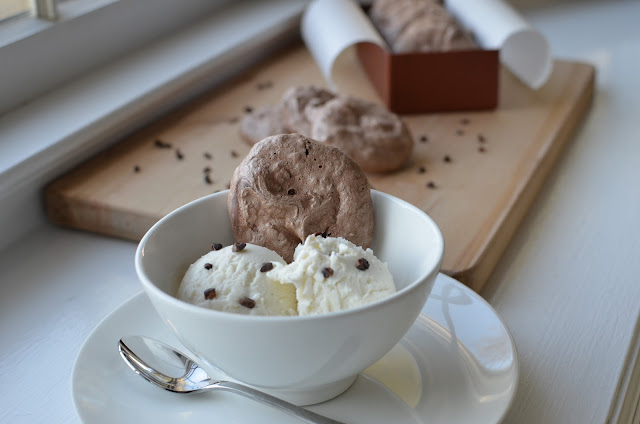 I'm tempted to pretend I've been sitting here this January constantly eating things with wheat germ and only baking low-fat, low-cal treats like meringues but I won't lie.  Not only have I been enjoying my Christmas chocolates (slowly but surely), I've made a couple of chocolate desserts I'll be showing you soon.  Let's just say chocolate and butter will be making a reappearance in the near future.
This recipe was adapted from Martha Stewart's mocha-chip meringues.  Instead of chocolates, I opted for cocoa nibs.  The recipe is pretty basic.
The foundation of the meringue is egg whites and sugar.  I made a bit less than the recipe but start by whipping room temperature egg whites with a pinch of salt until the whites turn frothy.  At that point, start adding a mixture of sugar and a bit of cornstarch, one tablespoon at a time, with the mixer on. 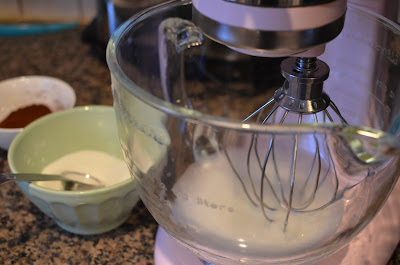 You want to whip the whites until they are stiff and glossy and this can take up to 10 minutes.  Typically, I worry about overwhipping my whites and "breaking them" but I've learned that the sugar being added to the whites stabilizes them and we don't have to worry about that so much when we're making meringues. 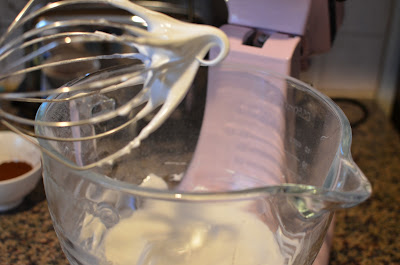 Add unsweetened cocoa and espresso powder to the stiff whites and beat some more until incorporated, scraping down the bowl as needed.  For stiff peaks, you want to literally be able to take a spoon into the merginue and create peaks in the batter. 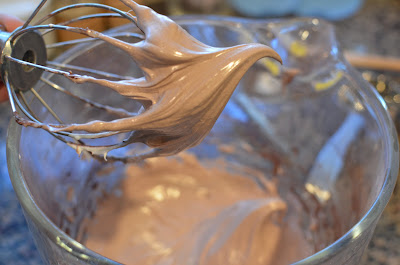 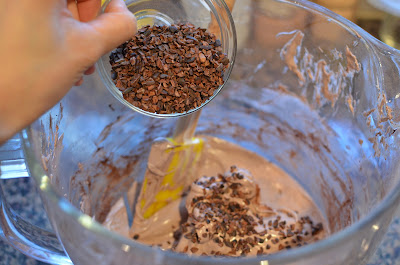 The simpliest way to scoop these out is to use 2 large spoons to scoop into mounds.  I went with heaping tablespoons onto parchment or silpat lined baking sheets. 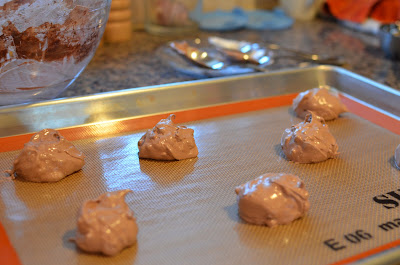 Bake the cookies in a 300 degree oven for 40 minutes, rotating the baking sheet halfway through the baking time.  When they are done, the meringues are firm but not cracked.  Let them cool completely for about 20 minutes outside the oven before removing from the lined baking sheets.  I think I could've whipped my whites longer since the meringues spread more than I expected during baking. 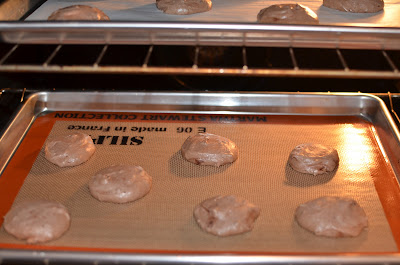 These meringues actually have a lot of flavor.  The espresso is not too strong at all but help give these meringues a light mocha flavor.  The crispness outside gives way to chewiness within and the cocoa nibs add a bit more crunch inside.  Our six-year old lost his first tooth a few weeks ago (he was so thrilled) and a second one is on its way.  Because of that, he did have a little trouble biting into these cookies and I did break them up for him but if you're above the starting-to-lose-your-front-tooth age, it shouldn't be a problem.  And if you don't have cocoa nibs or want a stronger chocolate flavor, use mini chocolate chips instead. 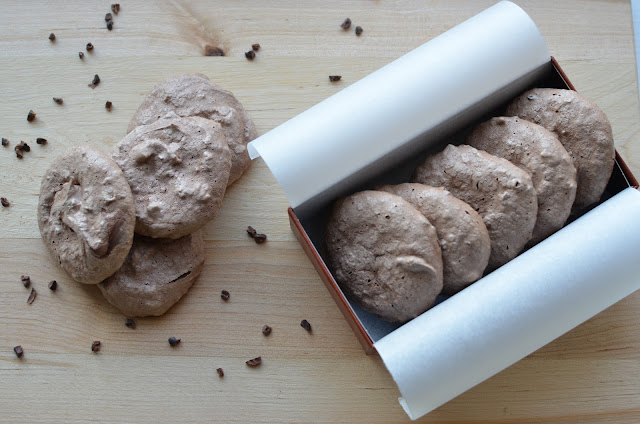 Recipe:
Mocha Meringues with Cocoa Nibs
Adapted from Martha Stewart
- Makes approximately 20 cookies, depending on their size -
3/4 cup sugar
1 tablespoon cornstarch
3 large egg whites, at room temperature
1/4 teaspoon salt
3 tablespoons unsweetened cocoa powder, sifted
1 teaspoon instant espresso powder
1/3 cup roasted cocoa nibs
Preheat oven to 300 degrees and set racks to upper and lower thirds of the oven.  Line 2 baking sheets with parchment paper.
Whisk sugar and cornstarch together in a bowl and set aside.
Using the whisk attachment of a stand mixer, whip egg whites and salt on medium speed until frothy.  With the mixer on, gradually add the sugar mixture 1 tablespoon at a time.  Beat until stiff peaks form, roughly 6-8 minutes (or longer), scraping the bottom and sides of the bowl halfway through.  Add cocoa and espresso powder and beat until combined.  Fold in cocoa nibs gently using a rubber spatula.
Drop batter onto parchment lined baking sheets in heaping tablespoons, spacing them about 1 inch apart.  Bake until crisp, approximately 40 minutes, rotating the baking sheets halfway through the baking time.  Remove the cookies from the oven and cool for about 20 minutes.  Once they are cooled, they should release easily from the parchment paper.
Meringues should be stored in a cool, dry place.  Store them in an airtight container, between layers of parchment paper, for up to 3 days.
Posted by Monica at 6:30 AM